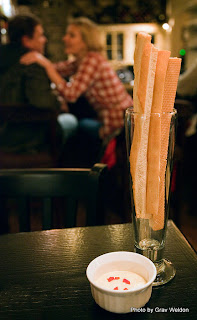 There’s a little jewel of a restaurant in the far northwest corner of the state. It’s a diminutive little restaurant on a large plot of land, and it’s offering up a lot of big ideas and dishes.

The place? Petit Bistro, open since April 2010 on Walton Boulevard on the north side of Bentonville. 30-year old executive chef Dane Main of Winfield, KS is creating dishes for just about every budget.

Photographer Grav Weldon and I sat down with Chef Dane on a blustery Friday evening to discover what makes the guy tick. We talked over iced tea and the fabulous dip of the night, a honey mustard garlic dip strong on fresh garlic, served up with crispy shards of breadsticks. 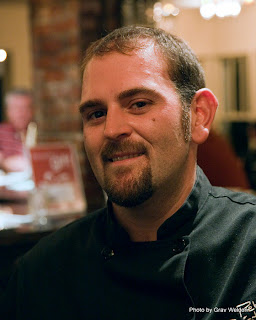 Main has been shining his culinary star since his college days. He progressed through culinary school in Charleston, SC and on through the Culinary Institute of America in Hyde Park, NY. Main did some time at Big Guy’s Subs and Bakery before this break. Owner Dario Amini asked Main if he’d be interested in a new operation, and in April 2010 the two opened up Petit Bistro on Walton Boulevard north of Bentonville’s downtown district.

The house itself dates back to 1903. Before life as Petit Bistro, it was a smokehouse joint. The Bistro sits in the front of the nearly eight acres of the property. Out back there’s a patio bordered by a spring that originates on the property, that’s 52 degrees year-round. During the summer months smooth jazz and laid back tunes grace the open space. It’s a creative use for this little property, a creativity that matches up well with Main’s funky mix of cuisines and cultures. 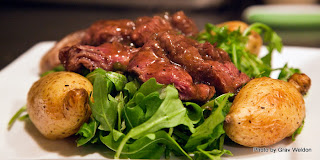 “It’s really eclectical, a mix of French dishes, food that resembles Mediterranean cuisine, an Asian influence,” says Main. “We’re not pinned down to one sort of idea.”

Part of Main’s ability to keep such a fresh and inventive menu going comes from the boss, who’s allowed him to shape his own sort of menu. “I have 100 percent creative control over the menu. But I still take suggestions.” 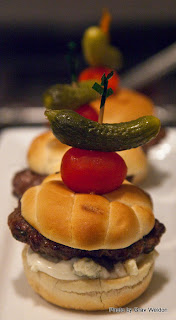 One of those suggestions came from Amini, who came up with Petit Burgers -- three adorable Kobe beef burgers seasoned with mint, salt and pepper served up on diminutive custom Brioche buns with Bleu cheese and caramelized onions, topped with cherry tomatoes and tiny dills. They’re one of the menu items that will stay; Main plans to change the menu four times a year, with just a few items remaining from one season to the next.

That’s not to say that Main sticks strictly with the menu. He’s been known to dilly-dally with impromptu specials. The complimentary dip he serves up with breadsticks changes almost every night -- some nights it’s an olive tapenade, other nights a red pepper coulis, still others a fruit compote. He also has a great time with desserts. 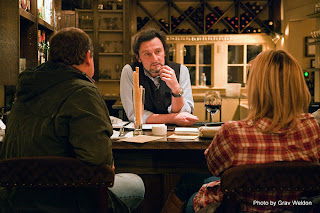 “A lot of the operation is in the show, and a lot of it is instinct,” says Main. “If the night is perfect and the group is right, I’ll come out with my Bananas Flambé. The bananas in flame, the sugar sparking, that’s the sort of thing people remember when they leave. It’s not just good food, it’s the presentation.”

It’s one thing to be given creative control in a big city kitchen. But the kitchen at Petit Bistro is smaller than many home kitchens. Main and his sous chefs operate in a space that’s absolutely claustrophobic; a well choreographed ballet between the chefs combined with a fastidiously organized workspace that extends upwards through the use of multiple shelves is all that’s keeping the kitchen symphony from disintegrating into cacophony. Still, the chefs managed to allow Grav and I a chance to experience the constant motion of the tiny space without a single collision. 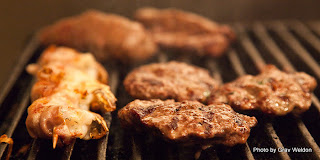 And what you’ll find in that kitchen… while we were standing there, we noticed mussels, shrimp and pasta being sautéed and flipped gently at the stove. Tiny Kobe beef patties were charbroiling on the tiny elevated grill. One chef put his touches on the tightly 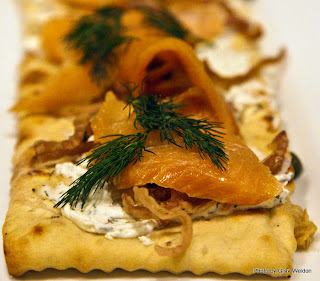 composed mountain of Steak au Poivre before sending it out.

Chef Main has been very interested in the locavore movement, reaching out to suppliers and searching out items to bring into Petit Bistro. “We try hard to use local products and our Farmers’ Market. We’re hoping to start our own herb and vegetable garden. Imagine vegetables picked and cooked on the same day.” 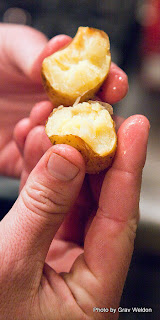 Grav continued to watch and shoot while Chef Main and I sat to chat some more. We shared notes about our children; he has two daughters, eight year old Aliya and two year old Jaelyn. Main came to the area after his culinary education to rejoin his family, who had moved from Kansas to northwest Arkansas in the intervening years. He brought with him his childhood sweetheart, Melinda, who he dated from the age of 16.
But Main’s interests haven’t just been in the culinary arts. He’s had a country band, which he describes as “red dirt” --- and a couple of years ago he performed in front of 16,000 people during semi-final rounds of American Idol. “Two years ago I decided to give it a shot. I was 28 -- that’s the cut-off age -- and it was something I’d always wanted to do.” Main actually made it through the second round of judging.

He has a pipe dream. “I’d love to be able to head in the direction of Nashville in five years with my music.” Main’s band was quite active before Petit Bistro started up, but the busy life of a restaurant’s executive chef has kept him from performing these past few months.

For now, it’s all about the restaurant. Petit Bistro recently added lunch. Main says he has a great team of chefs and bartenders who have been with him since the start of the endeavor. They seem comfortable and friendly not just with the clientele but with each other. 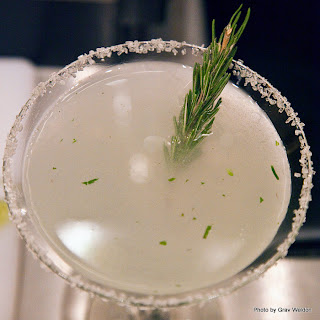 Grav caught one of the girls making up the restaurant’s signature cocktail -- a Basil, Mint and Rosemary Martini full of lime juice. The levels of green are pretty on their own below the sugar-encrusted glass rim; one is first struck with the fresh flavors of basil before the bite of rosemary becomes apparent. The vodka based martini finishes cleanly.

Main says he loves having musical acts come in on the weekends. There’s a patio out back perfect for basking in a sunset during the summer months with a nice smooth jazz trio or quartet. Main says he and his boss have fiddled around with the idea of getting a jam group together for the holidays. I can see that; the team the two have put together flows well in the tiny space.

I noticed something while we were there… over the two hours of our interview, customers flowed into the space… and stayed. There’s no rush to clear tables for new seatings at Petit Bistro. In fact, a group of eight were already into their cups when we arrived and stayed until the eatery closed much later in the evening, the constituents rambling and laughing together over small plates and drinks, obviously enjoying themselves. I asked the chef about this. “We’re casual here. This is a place for people to come and enjoy themselves. We’re not concerned with getting them in and out in an hour.” 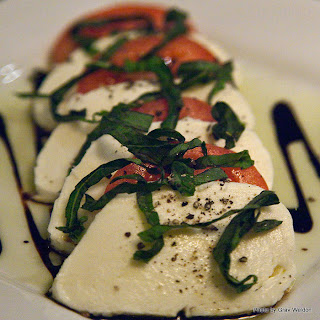 You’ll find all sorts of folks inside the restaurant -- couples enjoying a romantic dinner, friends out for a drink, executives from northwest Arkansas’ power companies breaking bread together. The wine list accommodates them all -- from the $19 a bottle LaVielle Ferme Rose to the $883 Chateau Margaux-Bordeaux 1998 Premiere Grand Cru. Main confirms the Chateau’s not a red herring; it’s purchased on a pretty regular basis. 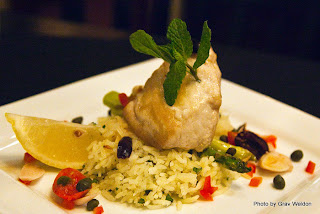 Menu options are similarly varied in price. We sampled a few of the chef’s dishes -- a Caprese Salad ($9) generous on the Mozzarella was an early favorite. The Escolar Puttanesca ($19) was a surprisingly hearty whitefish dish; the firm and buttery escolar held well against a bed of cilantro-enhanced Basmati Jasmine rice, paired with roasted asparagus and topped with a sautéed mélange of grape tomatoes, sliced garlic cloves and capers. 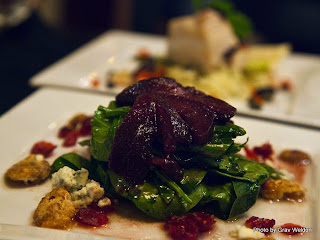 But our favorite dish, hands down, was the simple yet beautifully composed Spinach Pear Salad ($9), a salad inspired by a popular dish from the now defunct The Sanctuary Restaurant. It’s a sliced pear poached in a fantastic aged Madeira with cinnamon and nutmeg, served on a bed of baby spinach with candied walnuts, fine Bleu cheese and dried cranberries drizzled with a Chambord vinaigrette. Chef Main specifically designed this dish as a challenge to strike balance with all flavors -- sweet, sour, savory, salty. This dish has it all. That pear alone is the most fantastic thing I’ve put in my mouth in a long time.