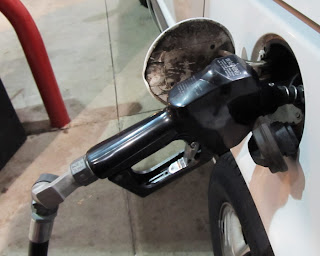 You can tell a lot about a person’s age by talking about gasoline -- not just the prices but how getting gas has changed over the years.

Did you know that at one point in time, Little Rock was home to the largest gas station in the world? No? Neither did I until the other day, when I discovered a postcard from the 1950s of 555 Inc., a block-sized service station near what was then the big Arkansas River Bridge. 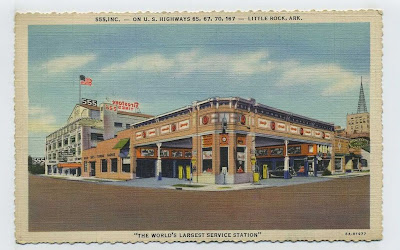 In Steven and Ray Hanley’s book “Little Rock,” “The 555 Inc. Auto Center at the intersection of four major highways, billed itself as ‘The World’s Largest Service Station.’ Since it took up an entire block at Third and Broadway Streets, the claim may have been factual.” The building, which stood catty-corner from Robinson Auditorium, had what was considered the largest dance floor in the city, called the Rainbow Garden, in the 1940s. The building was torn down in the 1960s for an insurance office. 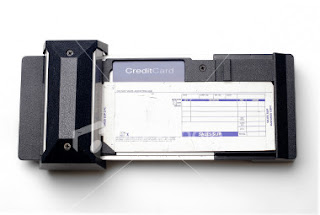 Of course, that was before my time. While I have no recollection of sitting in a gas line in the 70s, I do remember how different the process was back then. I remember going with my godmother to the full service station -- how you didn’t even have to get out of your car for a fill-up. There was an imprint board the attendant would give the driver to fill out as gas was delivered to the tank, the windshields were washed and the hood was popped so the attendant could check out the fluids. She’d always hand back the board with a five dollar bill.

There wasn’t much inside the average service station. The little office was just the tiniest waiting area, a couple of seats usually, with a counter for the clerk and maybe a cigarette or Coke machine. It was rare to find anything more than a rack with gum and mints as far as food goes.

That had all changed by the time I hit the road at 16. Gas was 69 cents a gallon, though it was about to skyrocket to 89 cents a gallon a short time later with the war in the Persian Gulf. There were convenience stores by that point, selling everything from cola to bait and tackle, and you did your own pumping.

Still, you had to go inside to take care of your business, which is why I think convenience stores prospered. After all, if you have to walk in to pay your bill, you might as well grab a drink or a candy bar while you were at it.

Pay-at-the-pump is probably the biggest difference I’ve seen since I started driving. Now you don’t even have to worry about going inside, just stick a card in and pump and go. There are now completely automated stations where nary a soul will greet you. In some cases, it’s a good idea… but when you’re out in the middle of nowhere and need assistance, it kinda sucks.

I’ve watched gas quadruple and even quintuple in price in 20 years. I recall it was just 99 cents a gallon any time I filled up during the 90s when I lived up in Jonesboro, and what a scandal it was when gas prices hit $2 a gallon after 9-11. Of course, I saw the $4 a gallon gas there a few summers ago -- the most expensive gas I’ve put in my vehicle was $3.99 a gallon and I winced with every gallon I purchased. Like most of the rest of the nation I breathed a sigh of relief when prices sank again. 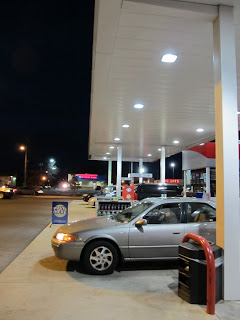 I got to thinking about the changes in our gassed-up lives the other afternoon. I was waiting for a chance to pull into a pump at the Conway Kroger store so I could use my grocery-induced 10 cent discount. Gas is back up again… even with my discount it’s $2.81. The sun was setting, there was a short line at every pump and I shared a small piece of chocolate with my daughter Hunter as I waited while my tank was filled. You know, in all that time I don’t think the pumps have sped up a lick.

And I was thinking -- you know, I don’t really want to be rich and there’s nothing I’m just dying to have. But if there were any amazing, unbeatable present anyone could ever bestow on my family, it’d be a card that granted unlimited gasoline. Or a way to get around ever having to pull up to the pump again.
To purchase this article, email Kat Robinson at 1/11/2011 01:11:00 PM