Rohwer in the soybeans. 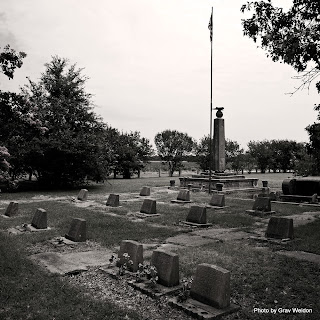 I have to admit it, I’m a Star Trek fan. Yeah, mea culpa. I came to Star Trek late in life, at the age of 13 thanks to my friend Kriste Parsons. It just wasn’t watched in my family. It is now.

My first Star Trek exposure was actually the fourth movie, and my first episode was "I, Mudd." Over the years I filled in the gaps and caught up with the other Star Trek serials. And I read a lot, not just fiction based on the series but the biographies and autobiographies of the actors. Yes, even Shatner’s. 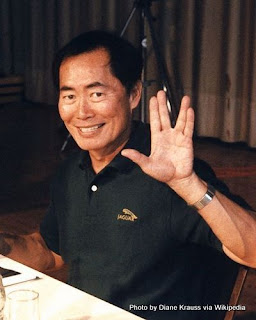 The one I really took to heart was that of George Takei. I always found him somewhat attractive and a rather friendly character. I even got to meet him when he came to Little Rock for a convention back in 1990. Yeah, I was a geek, and I’m dating myself severely. Well, at least there are no photos.

His life story’s not what you’d get with the average actor, and he’s been acting a lot longer than you might think (if you’re not a fan). He was born in 1937 and was living an average boy’s life in Los Angeles when World War II started. Takei, his parents and younger brother and sister were relocated in 1942 to the Rohwer Relocation Center in southeast Arkansas, like many other Americans of Japanese decent who lived on the West Coast. 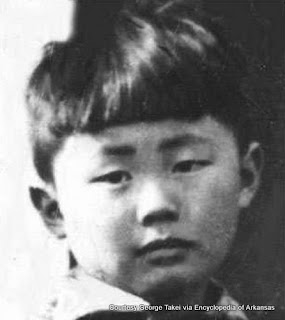 They spent eight months there before being transferred to the maximum security camp at Tule Lake, California. The Encyclopedia of Arkansas covers quite a lot about Takei and his time there -- I highly encourage you to read more about it.

Before reading Takei’s book, I had no idea there were relocation camps in Arkansas. I’d been through our public schools here and even through college before I learned this poignant fact. To me, it’s a big deal, and not just because an actor I like was on Arkansas soil. It was as if the relocation camps (Rohwer and a similar unit at Jerome) had been intentionally left out of history.

Back in 2004, I was working at Today’s THV when we did a story on Takei’s return for a special event, “Life Interrupted: The Japanese American Experience in World War II Arkansas.” I didn’t get to see him then, but it renewed my interest in finding out more about the camp. Unfortunately, I didn’t do a whole hell of a lot about it. That is, until one hot August Friday, when I rolled down that way with photographer Grav Weldon to see what it was all about.

I had been disappointed by the lack of information on the Internet. Some reports claimed that it was still a camp and that some of the buildings were still in use. Others… well, honestly, there just wasn’t that much out there. I did eventually find directions to the place, and after a stop in Dumas for breakfast and a misguided trip into a cotton field to find Old Napoleon, we arrived. 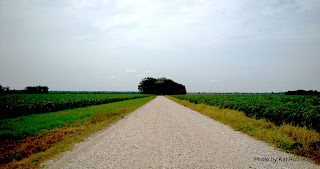 There’s just a sign on the highway, a brown sign that says the national monument is this way. It’s a gravel road, and you go over railroad tracks and suddenly you’re in a soybean field. There’s no other notice of where you’re at or what you’re doing. The first thought I had was “um, did we take the right road?”

But there in front of us across the field was a stand of trees, tall hardwoods amongst the soybeans. Curiosity had pulled me out of my bed early that morning; it had pulled me into the depths of southeast Arkansas and onto this gravel road, and on the off chance that we were in the right place, we proceeded. 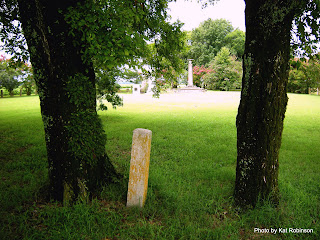 And found a graveyard. Honestly, there were no buildings in sight, just a tree-ringed lawn and a series of stone monuments. We drove around to the right and to the back, looking for something else, anything that might indicate the structures that had once stood. After sliding around in the mud near the back corner of the long yard, we decided “this must be it” and turned back. There’s no place marked for parking, so we parked parallel with the road and got out. Tall oaks and sinewy crepe myrtle trees lined a lawn that stretched perhaps 50 yards back to a series of monuments and headstones. Yard-tall stone markers outlined the plot. The lawn had to have recently been mowed; it was a little unkempt but still short. 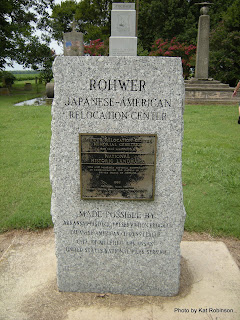 The first stone we reached on our approach was a stone obelisk that bore the National Historic Landmark bronze plaque, noting that the site had been designated in 1992. The bronze had faded, but the stone was as pristine as its first placement. 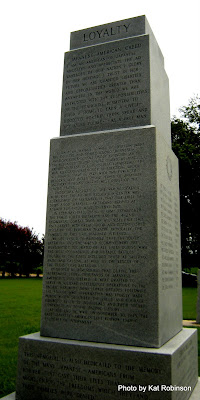 Past that was another relatively new marker marked CASSINO-ANZIO. This was a military campaign during the second World War. Along its sides are the names of the Japanese-American men interred at Rohwer who applied for military service and who served and died with the U.S. Fifth Army 100 Battalion, 442 Regiment. That’s right. Though our government took these men from their homes and sent them to the hottest, flattest part of Arkansas, they showed their dedication for our country and volunteered for service to fight in a war against several other countries, including their homeland. Cassino-Anzio was a campaign in March 1944, a march to Rome to oust the Germans.

On the back of the monument, the first paragraph of the Japanese-American Creed given by Mike Masaoka in front of the U.S. Senate on May 9, 1941.

I am proud that I am an American citizen of Japanese ancestry, for my very background makes me appreciate more fully the wonderful advantages of this Nation. I believe in her institutions, ideals, and traditions; I glory in her heritage; I boast of her history; I trust in her future. She has granted me liberties and opportunities such as no individual enjoys in this world today. She has given me an education befitting kings. she has entrusted me with the responsibilities of the franchise. She has permitted me to build a home, to earn a livelihood, to worship, think, speak, and act as I please -- as a free man. 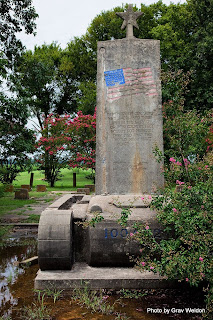 Below this inscription, an accounting of what had happened, etched for all time in words that may only be read by those who traipse across that soybean field. Or here.

There was a reflecting pool behind that marker, a badly maintained pool or perhaps just an area that had been blocked out and which had catched the rainwater. 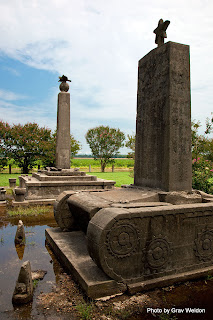 To the left was a monument in the shape of a tank, apparently contemporary to close to the end of the war also commemorating the lives of the Japanese-American soldiers who died in World War II. The statue still stands, but there is damage at the point where the tablet of names meets the tank bottom. The portion containing the “treads” include renditions of gears in the form of lotus flowers. Above, a single five point star. 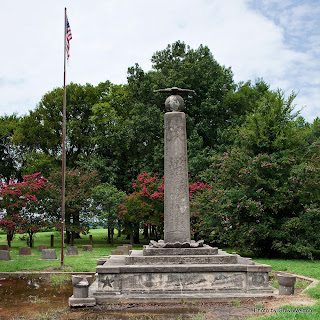 To the right stands a similarly sized monument, another obelisk, this one topped with a bird on a sphere. Japanese writing graces some of its faces. On the north side is an inscription, “May the people of Arkansas keep in beauty and reverence forever this ground where our bodies sleep.” The once intricately tooled monument has lost much detail with the weathering of time, and it's started to sink 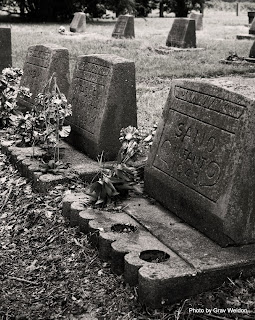 sideways in the pool, but it still stands poignantly as a reminder -- this isn’t just a stretch of historic land; it’s a graveyard. Don’t disturb the souls here.

We carefully and quietly moved among the headstones, reading the names of those who perished here. Most were adults, but in the southwest corner we found the headstones for three infants who died in 1943 -- Masaka, Tasugi, Sano. Whether these were the personal or family names of the children, I don’t know, but to me it was poignant. 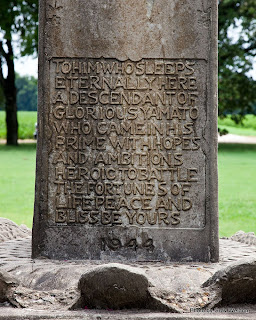 A line of crepe myrtle trees separated the graveyard from the back of the long yard. There was a faded road within and a few scattered stones, but nothing else. The buildings on this plot of land have been lost to time, either long ago ruined or moved elsewhere. On all sides, soybeans. 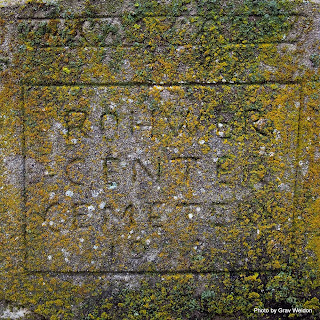 And that was it, nothing more to recall what had happened here those years, nothing more to honor those who passed this way. Just a graveyard in a soybean field. Part of me wonders why, but part of me knows the possible answer. There is some shame in what was done here. Our government rounded up its own citizens just because of their genealogy and planted them on Arkansas soil out of fear.

But that’s just me editorializing. What you really want to know is where to find that soybean field. It’s off Highway 1 (the Great River Road) near Tillar. You can find a map here. Take someone or tell them about this place.
Told by Kat Robinson at 3:00:00 PM