Go tell Ms. Rhoda; she'll hook you up with tamales. 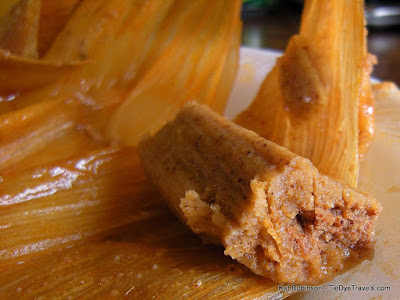 After our breakfast in Dumas, a trip down Highway 1 through Watson, a misguided attempt to find Old Napoleon and a stop at Rohwer Relocation Camp we ended up on the doorstep of Rhoda Adams, as in the particularly local establishment in Lake Village known as Rhoda’s Famous Hot Tamales. She and her husband James run this place on St. Mary’s Street, and you can smell it a block away, the smell of spices and fried things luring you off Highway 65 if you let it. If you don’t roll down your windows and never leave the highway, you may never find it.

Now, it had been a while since we’d had breakfast — or, I had breakfast, that is, at Trevor’s Café in Dumas. We’d left there at 10 a.m. and here it was coming up on 2 p.m. and poor Grav still hadn’t eaten anything save for a handful of crackers he picked up at Wal-Mart when he went to replace his shoes. This requires a separate story that you can find summarized in the album on my Facebook fan page. Short of it was, he was already hungry. And I was getting there. 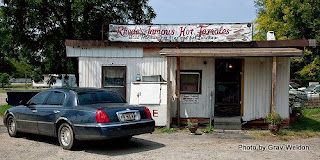 That being said, he’d had a tender stomach for a few days and was sure that tamales were about the last thing he should consume. Not I. I’d heard about these things, tucked into coffee cans and passed out among the RV crowd and such. I’d even had one years ago, and have directed people to Rhoda’s doorstep. But I had yet to darken the door.
We walked in and were at the counter, staring down at menus placed there with all sorts of items, cheeseburgers and such. Cheeseburgers? Yes, indeed. And chicken. But the first thing on the menu was a $9.99 tamale dinner. And I decided I would have it.
Grav looked mournfully at the menu. “I’m afraid to eat anything on this menu,” he told me.
“Anything?”
“We’ve been traveling.”
“And?”
“And it’s been hot.”
“Fair enough. I’ll let you try mine.”
“I want some pie.”
I looked at him and followed his line of sight to the two pecan pies that were sitting under the hood next to a pile of fried chicken. I could even smell a little of that woody tang in the air you get from making a Karo-nut pie. They looked good, but -
“Fair enough, but I want tamales. That’s what I came for.”
A woman who’d come from the back of the store was getting ready to depart out the front door. “Whatchall want, honey?” she asked both of us (I’m guessing).The older gentleman behind the counter motioned at us. “You can sit,” he told us. We walked over to a table in the corner that had a framed article on it. From looking around the room, we noticed quite a few articles on the wall. This place is apparently quite well covered. We knewRex had been by, but there were still a lot of pieces on the place. No matter.

“Tamales,” I told her.
“Three, six or twelve?”
“That’s a lot of tamales?”
“Do you know?”
“I’m guessing three. I can order more if I need them.”
She looked at Grav. “You need six.”
“You think so?”
“I’m not eating them,” Grav told her.
She leveled a look at him. “Six,” she repeated.
“Six it is, then,” I confirmed.
“And some pie,” Grav stated.
“Can’t get you no pie.”
“They’re right over there.”
“They’ve done been sold.”
“Are there any others?”
“I’m sorry,” she said, looking at Grav with a genuine look of apology in her eye. “Can we get you something else?”
“I’m thinking.”
“You try the tamales, you’ll want more.” She started to step out the door, then hollered at the elderly gentlemen who was apparently also the cook. “Three and three!” And out the door she went.
The cook came around to our table. “Three and three. What you want to drink?”
“Tea,” I told him, “unsweet, no lemon.”
“We have sweet tea.” He said it like it was just a fact of life, something to accept. So I did.
“That’ll work.”
“Do you have Mountain Dew?” Grav asked.
The gentleman started going through a litany of beverages. “We have Coke, Pepsi, Dr. Pepper, Sprite, orange, water, Mountain Dew…”
“That’s fine, that’s good,” Grav stopped him. The cook nodded and walked over to the drinks case in the corner. He brought us back our beverages with cups of ice and shuffled off to the kitchen.
I asked him whether the tamales were going to be too much, and he told me he was okay. We talked about the décor and such and the lack of pie availability. 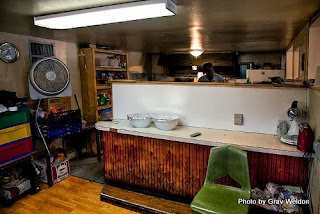 There was just one other customer inside, a large gentleman at the table by the counter. He asked us where we were from. He told us he was from Newport, and I asked him if he’d been to Lake Hogue to go fishing. He had. I sometimes miss living up in that neck of the woods.
Our order was brought to our table, two Styrofoam plates with three tamales each and a couple of plastic forks. The order was delivered silently. I realized at that point I hadn’t actually ordered a tamale dinner, but that was fine. The tamales themselves were all I was really interested in.
Out came the cameras, of course. Grav and I alternated snapping shots. The gentleman at the other table regarded us with interest. Grav gave him what became our catch phrase of the trip: “We shoot food. This is what we do.”

Photos taken, I took my fork and flipped back a husk. The tube of cornmeal wrapped meat lay before me, and I scooped up a chunk and took a bite. The hearty flavor of well-tendered meat blended with a mix of ancient spices and the flavor of the smooth, yellowed cornmeal — a mouthful of mush, sure, but one that felt like standing in a field and feeling a Southern wind on your neck. It was a savory and slightly paprika-heated bite of married-people passion, redolent of chicken drippings and a little chili powder. I found I’d finished the first one before I knew I’d really begun.
Seeing my vigor in attacking the tamales, Grav let his curiosity get the better of him. He flipped open a husk on the other plate and tried the tiniest of bites. “This… this is really good,” he told me. “I wish I could eat more,” he said, digging in a bit further.

“They are good, aren’t they?”
“I really shouldn’t be eating this.”
“But they’re fine!”
“They’re… oh, no, you’re eating pork.” He looked at me a little panicky. I shook my head.
“No I’m not.”
“Tamales are pork.”
“Not always. These are beef and chicken.”
“How did you know that?”
“I do my research. Besides, if they were pork, I’d already know by now.”
He breathed a sigh of relief. “Well, good then.”
I nodded my affirmation and turned back to my plate, only to realize I’d already eaten all three tamales. I looked back at him and took the other plate away. 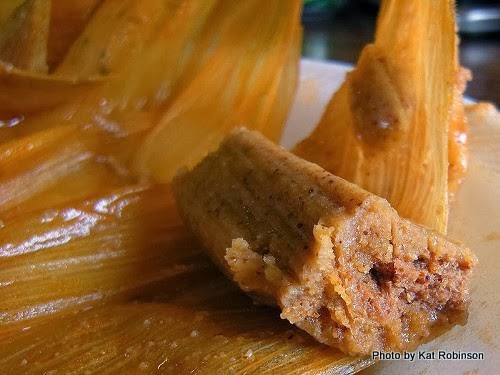 The tamales were so smooth and comfortable, they just fit right into the palate and went right down the gullet with ease. I was trying to slow down. Then I realized I had seen a flash of white on the plate… being Grav searching out another bite.
“I thought you were going to stop.”
“I am stopping.”
“No you’re not.”
“I am! I am!” He put the fork down.
“You don’t have to.”
“Yes I do.”
I just grinned and ate the last tamale, sparing him the temptation.
A few minutes later we stood up. I shooed him outside and went to pay up. Our total came to $6.33 with tax. There was a part of me that wanted to ask for more, but I knew I had much more to do in the day, including shooting at the Highway 82 bridge and grabbing another bite in the evening.
I regretted that Ms. Rhoda wasn’t in, because she sounds like an interesting person to meet. I did feel for Grav, though, now two meals behind. What we ate that evening, coming up tomorrow.
You’ll find Rhoda’s Famous Hot Tamales on St. Mary Street in Lake Village, a couple blocks east of Highway 65 on the north side. (870) 265-3108.
To purchase this article, email Kat Robinson at 8/10/2010 01:45:00 AM