On the Making of Fried Green Tomatoes. 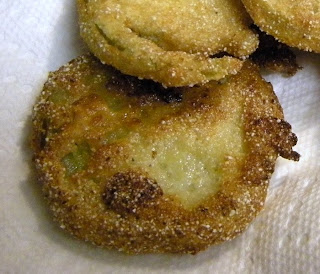 Ever since Fried Green Tomatoes at the Whistlestop Café hit the bestseller list in 1987, the South has been branded. Frannie Flagg’s book (and the subsequent movie) brought the askance little side dish from something you did when you were frying up catfish and other foods to its own unique space in the Pantheon of southern foods. The crispy rounds quickly surpassed all but grits in their recognition for edible options below the Mason Dixon line.

Sadly, that’s meant a lot of misinterpretations around these parts. Part of the hazard associated with my job is the consumption of sub-par fried green tomatoes.

The usual issue is bad breading -- either the restaurant in question has gone for a single dip in the cornmeal and somehow expected the mess to stick to the tomato slice through the cooking process, or the battered slices are far too thin to battle the crust. I’ve seen it happen over and over again, even at some of my favorite places to eat. Sometimes there’s even a consistency fail from visit to visit. For instance, Cotham’s in the City usually has some pretty decent specimens, but I have on occasion encountered thin, grease-soaked examples, as if the oil wasn’t quite hot enough to do the job. 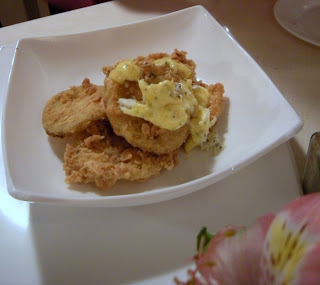 The best fried green tomatoes I’ve ever had were encountered at a place called Jesse’s in Magnolia Springs, AL. Some might wince at the $11 listing on the menu, but they’d be wrong to miss out. Jesse’s fried green tomatoes are somehow light and airy, almost tempura-like yet with enough cornmeal in them to make them acceptably Southern. The tartness of the tomatoes is just so, and the batter is seasoned well. On their own they would be a treat. Served up with Hollandaise and sautéed lump crabmeat? Ethereal doesn’t even come close to describing the experience. 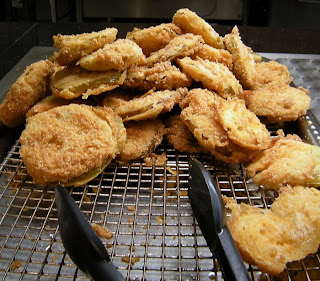 Thing is, the fried green tomato has become so expected on Southern menus that sometimes they border on the obsequious. Paula Deen’s Buffet at Harrah’s in Tunica serves them up on their own, plentiful as hush puppies. There’s even a dish on the breakfast menu that I somewhat like, the Fried Green Tomato Eggs Benedict, with their crowns 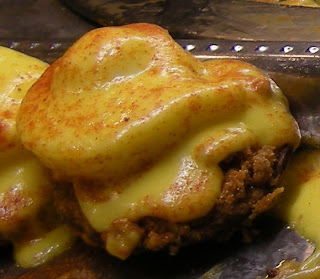 of fluffy whited eggs and their spicy not-quite-Hollandaise Cajun style sauce poured over the mess, gravy-style. No meat, but the dish doesn’t need it, it’s rich and full of cholesterol and fatty acids and all the dirty food words they put in magazines to scare you.

Thing is, I believe the proliferation of fried green tomatoes belies where they came from. Now, a green tomato is a sacrifice. It’s a red tomato that hasn’t had the opportunity to get that red. In good years you could eat them and not feel guilty -- you’d have tomatoes coming off the vine all summer long. In bad years, though, you wouldn’t take them unless they were windfalls or you just couldn’t help it.

Green tomatoes were also used for other things, like pickles and relish. Perhaps they came from the leftovers, I don’t know. I just see their similarity to catfish in the way they’re cooked and breaded.

I met a lovely lady while researching projects in Door County, WI - a fellow journalist by the name of Christine Gable. She runs a website called Queen of the Quick Meal. We got to talking and I ended up promising to send her a recipe for fried green tomatoes. After all, when you get down to it, they’re relatively quick to make. Once I got back home I got to thinking about it, and realized there were some things we did here that wouldn’t just be a simple 20-minute thing for everyone else. For instance, I usually keep two plastic containers in the freezer -- one with flour and one with cornmeal -- just for battering items for deep frying. Not everyone has this. There’s also the matter of what you do with the leftover egg and such. These things came to mind as I got out the ingredients one day and set to making up a batch.

See, funny thing is, I only make fried green tomatoes when they are appropriate to make -- that is, between June and September, when it’s plausible to find fresh local tomatoes around. Hothouse tomatoes just don’t have that right bite, that particular sharpness that the dish requires. But when they are in season, I have to make them. My Yankee husband loves them, but only when they come out of our kitchen. Funny, that. 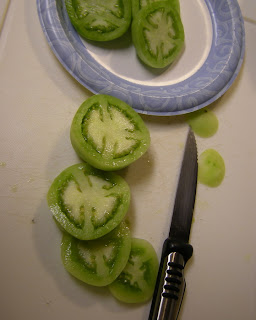 First thing I do is slice the tomatoes. These ‘maters came out of the garden of Chuck and Lisa Hassell, good friends of mine and the parents of another good friend of mine, Leif Hassell, who you may have heard me talk about before. I washed them and let them dry in the refrigerator once I got home with them, so when I pulled them out they were ready to go. I tend to slice my tomatoes about 1/8th to ¼ inch thick, and I use everything except the little bit where the stem was.

I usually turn the heat on the stovetop about this point, medium high. I prefer to fry in cast-iron, and you don’t need even an inch of vegetable oil to fry in. Just make sure you have enough time for the oil to heat up. 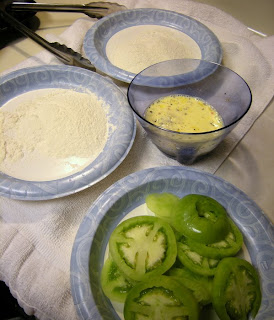 Now this may be the point where you’re asking yourself “hey, why green tomatoes? Why not red ones?” The reason for that, outside of the tartness you really want to experience, is firmness. Yes, I have encountered store-bought tomatoes that have the appropriate firmness and lack of mushy bits to fry, but if you get a tomato with that firmness and it’s red chances are it has lost its taste. I have never encountered a fully red tomato that was strong enough to dry-batter twice and deep fry. Never. 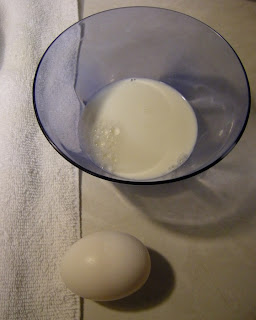 After cutting up the tomatoes, I went and got my dry ingredients. I needed to measure out what I was going to use to share with Christine’s readers. I settled on a half-cup each of all purpose flour and cornmeal mix. That may not seem like a whole lot, but it’s enough for two tomatoes (after all, including Hunter there’s just three of us, and I believe fried green tomatoes are one of those things you need to eat in one sitting). I use my own ½ War Eagle Cornmeal to ½ all purpose flour mix for my cornmeal mix, but I’ve also used Martha White. Either is fine. 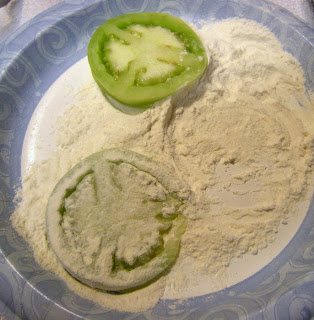 I then got together my wet set, a single egg and a splash of milk. A splash in this instance is about a quarter cup. I’ve seen others use buttermilk, but since I don’t drink buttermilk (my grandfather would probably be disappointed) I never have it on hand. I add several grinds from the salt and pepper grinders and then beat the tar out of it until the egg lightens. 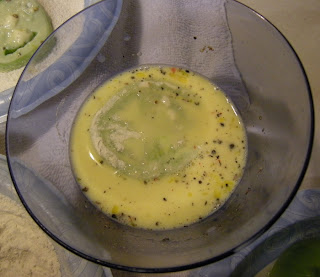 The next part is easy, but it’s where most folks screw up. Before you go putting your tomatoes in the wet, plop them down in the flour and dust them, I’ve done this on paper plates in the picture, just to show you how you can do it. If I was doing this normally, I’d have them in the flour container for a good shake. Dunk -- don’t soak -- the slice in the egg wash, then plop it down in the cornmeal mix. Flip it over. Set it aside. It’s ready to go. 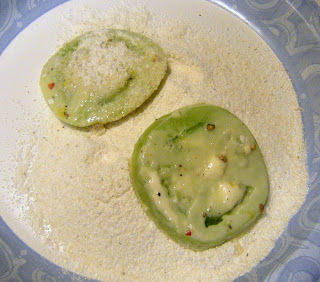 I like to have a half-dozen slices ready to put in all at once, just so I don’t get confused over which’s went in first and which hasn’t been turned. Be careful when you drop them in -- place them in edge first and let the slice drop away from you. Grease pops hurt. 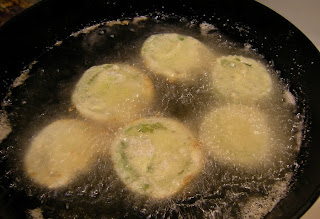 For the first batch, I usually give each side two minutes. Later batches take longer because the oil cools with each tomato slice you drop in. I keep an eye on it. If it starts to smoke, the oil’s too hot. If the slices are too greasy when they’re pulled out, they oil’s not hot enough. Keep an eye on it. 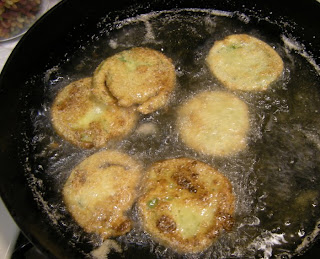 And what do you serve them up with? In my opinion, not a damn thing. They’re seasoned in the egg wash (some folks even season the tomato slice itself before it’s dunked in the flour; I can get behind that) and they don’t really require anything else. But if you have to, you might try doing what my husband sometimes does -- take a half packet of dry ranch dip and mix it with a cup of sour cream. I still prefer them plain. 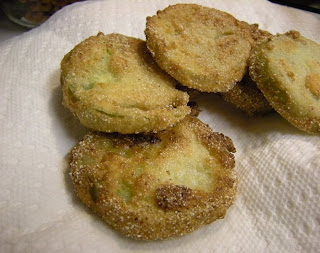 Will the fried green tomato ever go away? Doubtful. Will there still be bad ones? I think so -- as long as restaurants serve them way out of season or in cases where proper preparation and tasting haven’t been done. But when done right, a fried green tomato slice is about the best thing you can have on the side of your plate during summer. That’s my opinion, take it for what you will.
Told by Kat Robinson at 11:24:00 AM