Plates Loaded, a Swing and a Home Run at Home Plate Diner in Bryant. 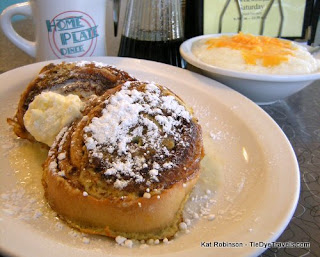 This 50s-style teal-and-chrome diner on the west side of Bryant can bunt on a few things, but when it comes to breakfast, a couple of items knock it out of the park.

Several readers have suggested I try out this new place in Bryant, so I obliged one noontime, encouraging Paul to come have lunch. That wasn't hard. Hunter, of course, was along for the ride.

We arrived at 12:45, hoping to miss the lunch rush and utterly failing. There was a line. For a few minutes, we dithered on whether to find another place. Hunter fussed in her carrier and I tried not to be impatient. Fortnately, the line was quick, and we placed our orders and had a seat. 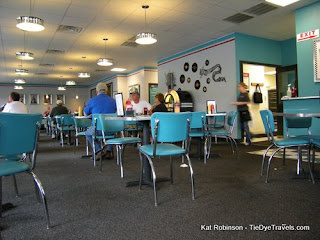 The interior of Home Plate Diner is heavy on the teal - so much, in fact, that I was concerned the 80s had seeped in. A brightly colored juke box hinted at an era that more people would associate with. Specials were written on a sign on the wall - hamburger steak, pork chops, chicken fried steak, fried okra, mashed potatoes, sweet potatoes stewed tomatoes, French fries, dinner salad, fried squash, green beans and corn. 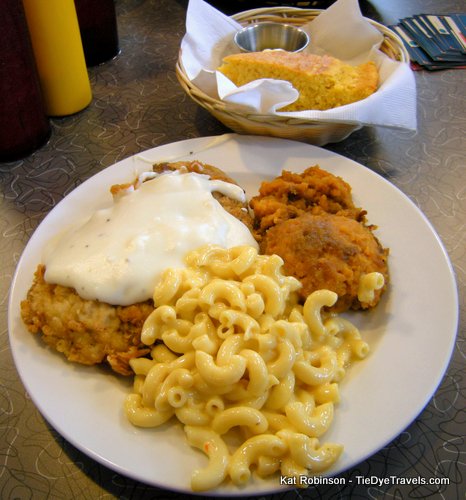 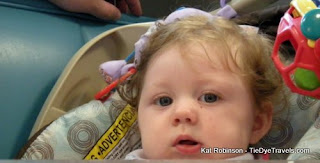 Our number was called and I went up to claim our tray of food. Paul had chosen the chicken fried steak and it looked magnificent - a large patty of chicken smothered in gravy. It was nicely battered like a fritter, and the bite I got out of it was satisfying. The sweet potatoes were a little sugary for my taste, but Paul really liked them. Hunter dug the macaroni and cheese, which we took turns offering to her with chopsticks we brought from home. 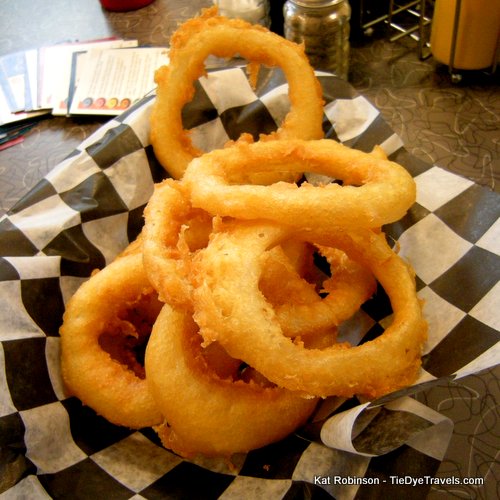 We all rather enjoyed the crispy, large onion rings, one of which Hunter chewed on most of our visit. The flour batter was light and maybe not as salty as I had hoped for, but the just-right slices of onion underneath were sweet. I was happy with them. 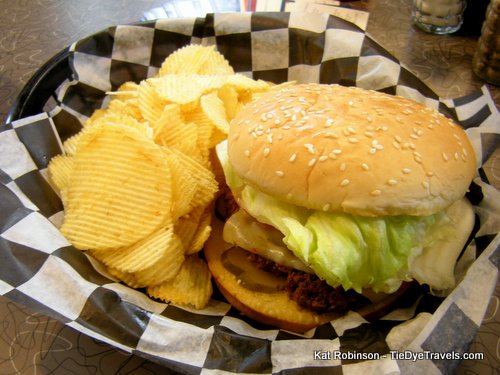 However, I was less impressed with my burger. I'm starting to get a real collection of burgers going, and while this was was all right, it wasn't the sort of juicy-til-it-drips burger I'd come to be used to in my travels. The pepper jack cheese provided most of the flavor here, and the huge chunk of lettuce had to come off. Next time I'll try cheddar.

We were pressed on time, so passed on dessert, but I noticed the menu had breakfast listed and I made a note to come back.

Breakfast in Arkansas week was a great opportunity to do just that. As Eat Arkansas readers already know, I've been writing about places to grab nourishing starts to the day all over the state. And I knew I had to come back for something in particular. 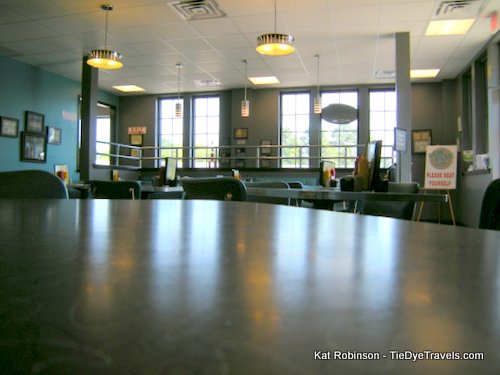 I went around 9am on a weekday. There weren’t all that many people in there when I arrived  The lone waitress waved her hand and said I could sit anywhere. She came breezing by to ask what I wanted to drink, and when I told her coffee she told me I could help myself, it’s complimentary. She dropped off a menu and went to assist other customers. 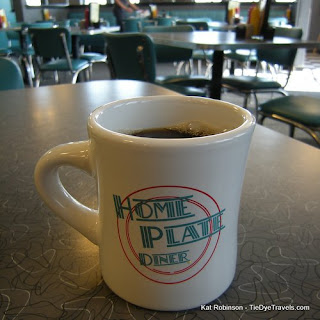 I made my way over to the coffee station. Some of the coffees had run out for the day, but there was still French roast, very dark and deep like French roast tends to get. The diner had placed out all manner of artificial sweetners and flavored creamers as well.

I quickly determined my order (it wasn’t hard at all) and gave my waitress back the menu. At the table next to me, there 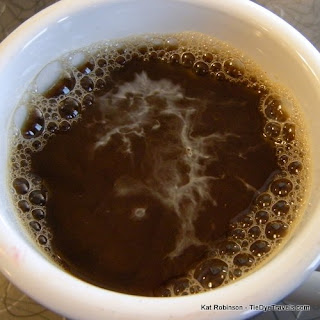 was a gentleman also sipping coffee. He smiled at me momentarily before being drawn back into his menu.

A group of ambulance service folks came in and ordered up. One of the guys saw the gentleman at the other table and went to have a talk. Seems they hadn’t seen each other in a while. They exchanged stories about their children, compared their ages and commented to each other how they needed to stay in touch more. 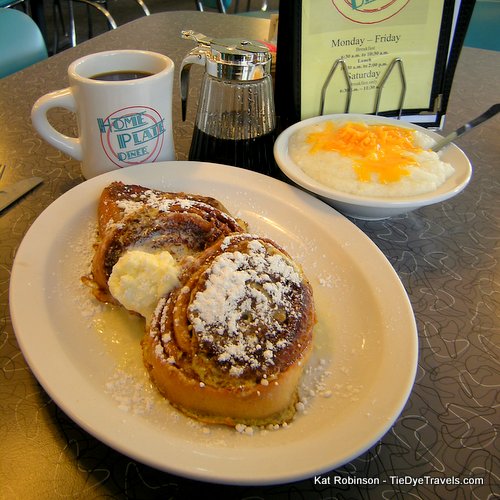 My waitress appeared bearing a couple of plates and a syrup dispenser. I had ordered the Cinnamon Toast French Toast ($5.69) and the Cheese Grits ($1.69). 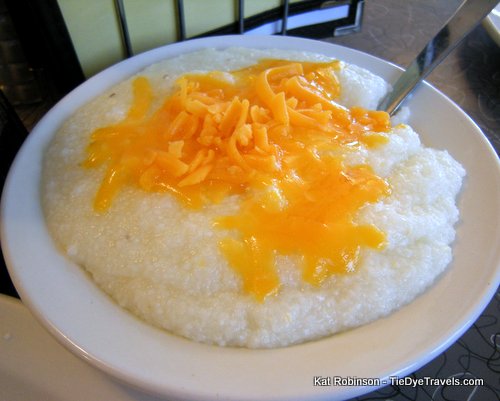 The grits were pretty plain and relatively unseasoned on their own, but their crown of Cheddar cheese made up with its own saltiness. I savored them, they were well cooked and not gritty like some grits can be. Couldn’t finish them all, though. 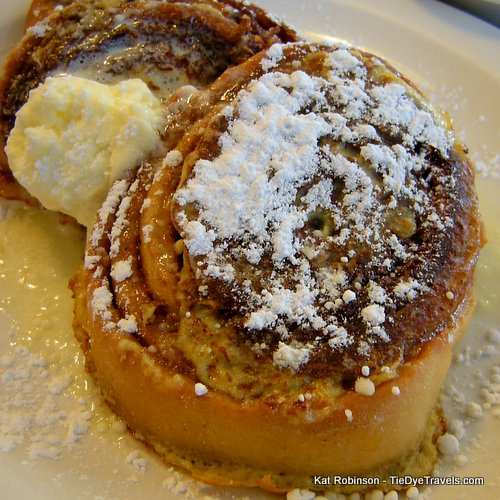 It’s the French Toast, though. Seriously, this is a doubly divine dish that didn’t need the proffered syrup. Home Plate Diner makes its own cinnamon rolls — they’re ovoids about five inches in length, soft and packed with cinnamon. The cook slices them horizontally into three, batters them and pan fries them before dusting them with powdered sugar. The egg in the batter makes a mice firm custard that has a denser consistency than traditional French toast; the inherent sweetness of the pastry provides all the sweetness necessary. It is quite substantial in itself. I tried it with the syrup, and while the syrup didn’t take anything from the dish, it didn’t add anything to it, either. 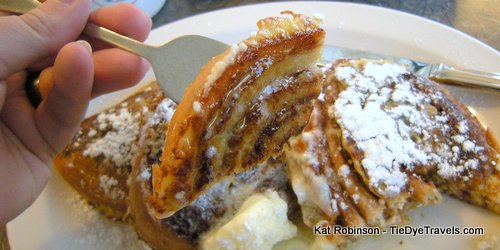 The table of ambulance service people were just looking up to greet the waitress returning with their food when a call went out. The lady in the group looked at her omelet and sighed; the waitress offered to box it up for her or hold it in the kitchen. One of the guys offered to sit with the breakfast — and the other two took off to handle the emergency. I took off, too, the remnants of my Cinnamon Roll French Toast safely secured in a box.