The Legacy of the Arkansas Rockefeller.

Bountiful Arkansas Weekend isn’t just a celebration of Arkansas farms and produce. It also commemorates the ideas of a man that changed the face of our state. 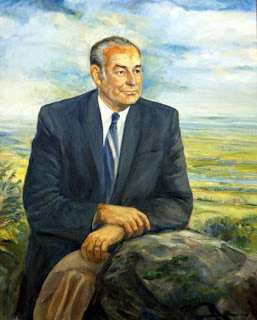 Winthrop Rockefeller was a hell of a man. My generation may not recognize his influence upon our state, but we should. Before I was born, this one man changed the face of Arkansas. As a Republican, he forced changes in his own party that allowed him to become the first Republican governor of Arkansas since Reconstruction. To defeat him four years later, the Democrats had to shed the post-Faubus funk and move on. 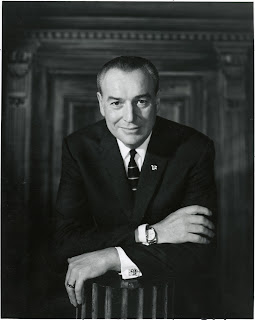 Rockefeller made some amazing moves that broke down the status quo. He hired an FBI agent to head the State Police and get rid of gangsters in Hot Springs. He quietly oversaw the integration of Arkansas schools after Orval Faubus and the media disaster of Central High School. And as a last act in office, he commuted the sentences of every prisoner on our state’s Death Row and challenged future governors to do the same.

He shaped history, sure. But his legacy lives on in the acts of charity and philanthropy he committed, and nowhere can you feel that stronger than atop Petit Jean Mountain at the Winthrop Rockefeller Institute. 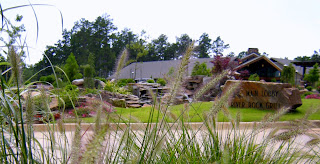 It’s an unusual sort of institute. When you pass through the gates onto the University of Arkansas owned-and-run property, you aren’t greeted by white columns or big statues. You’re in a cow field. The road is lined with fences that are interspersed with feeding troughs. The road rolls with the small hills atop Petit Jean, and you veer off to the left at the top of one rise to see the campus spread out ahead.

I’ve been several times now. I find it to be a comforting place, not what you might think of when you consider a school. The entire nature of the campus is to blend with the land, reusing what was found there and incorporating other materials from around Arkansas. The campus looks like it was meant to be here. And you never forget you are on an honest, working farm.

One particular visit: Bountiful Arkansas Weekend, which is coming up July 16th and 17th. It’s not just another Arkansas festival. It’s a grand introduction to an idea that Governor Rockefeller held dear, and I highly recommend you consider attending. I went last year and found it to be more educational than I had anticipated.

I was met on arrival by David Davies, the executive director of the Winthrop Rockefeller Institute, a project of the University of Arkansas system. The second, Kathy Edgerton, became my tour guide for a good portion of the day. 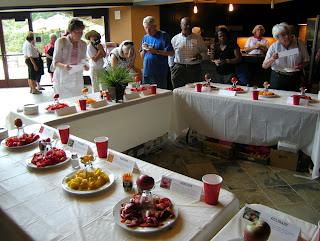 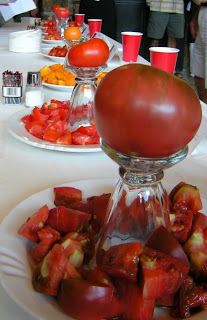 Vendors from Arkansas businesses and farms had set up for the event. There was an information tent with several organizations offering advice on everything from finding organic locally-grown food in the area to tips on growing natural and legacy varieties of garden plants. 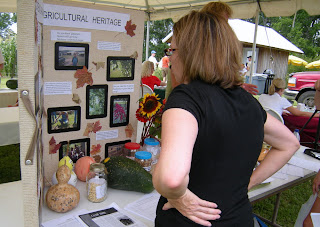 The folks from Post Winery had set up with their wines and juices and were offering grapevine starters for $15. Bean Mountain Farms had out row after row of fresh herbs and plants to take home and start in their own gardens. Some growers offered heritage varieties of produce, such as squash and eggplants and tomatoes and peaches. 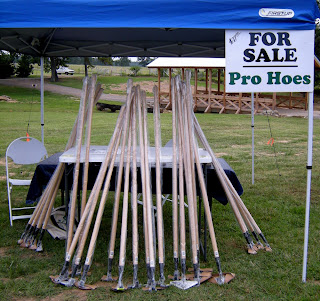 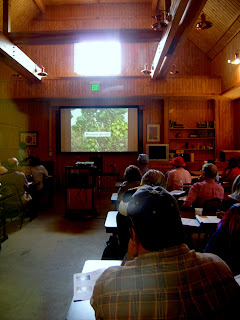 The day was rather hot, but that wasn’t keeping people away. 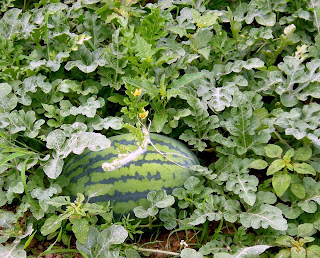 Dozens of people were spread out in groups here and there, checking out the farmstead and the gardens.

The gardens themselves were healthy and full of life. Watermelon varieties from all over Arkansas are already gaining bulk and growing big. Master gardener G.M. Greene told me that around here, melons get into the 40-60 pound range, and in 2008 some of the melons hit 70 pounds. 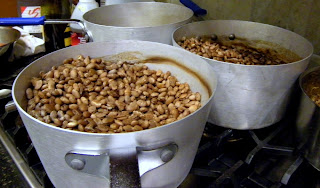 I checked out the rows upon rows of tomato varietals while I was in that section of the garden. It looked like the start of a beautiful season. In addition to the traditional gardens and melon patch, there’s also a vineyard and orchard in the Heritage Farmstead. 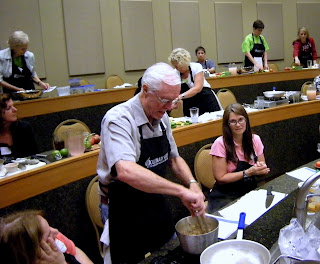 Like many others, I took the chance to eat lunch at the River Rock Grill, the fine dining establishment at the institute. After lunch, Adena took me to see what was going on in the classroom behind the restaurant. Chef John Leonardis was in, teaching a class of 35 a class on Arkansas food featuring Watermelon Soup, 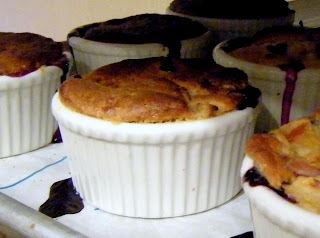 Three Potato Salad, and Peach and Berry Cobbler -- all part of the Second Saturday Series.

I found myself really wanting to stay longer, but scheduled demands being what they are I had to leave before the evening’s activities -- which included a lecture on eating within a 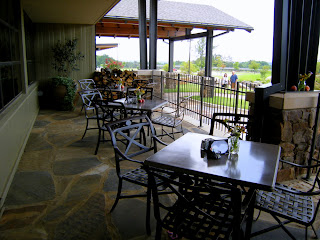 100-mile radius, an evening concert by Runaway Planet (on a stage built by UA students), and free beer from Diamond Bear Brewery. When I left out, there were close to 800 people who had gone through registration -- lots more than they had expected, but all the volunteers and UA staff that were running the event dealt with the hassles seamlessly.

This year’s festival is two days (unlike the single day event last year). My good friend and garden guru Chris Olsen will be speaking, along with horticultural legend Janet Carson. There’s a kids village this year including a farm, a market and a school to show kids the proper things to eat. There will be screenings of food-related movies from the Hot Springs Documentary Film Festival and an arts show and sale as well. The festival is growing, and I think it’s really the sort of thing the Governor would have appreciated if he had survived to today. 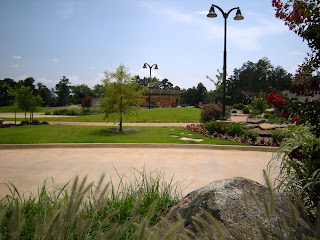 You see, Rockefeller could have had an exceptionally easy life. He was, after all, a Rockefeller, brother of Nelson and John D. III and Lawrence and David and Abby. His siblings became politicians and philanthropists and bankers and they stayed for the most part in New York.

Perhaps Win was the black sheep of the family. After all, the grandson of Standard Oil founder John D. Rockefeller had the opportunity to take a top position with the company after leaving Yale. But he chose instead to be a roughneck and work in the oil fields instead. You have to wonder what he was thinking when he came to Arkansas in 1953 to visit a friend, what beauty lead him to make that decision and buy that farm atop Petit Jean Mountain and to become the Arkansas Rockefeller. Whatever it was, it must have been incredible.
To purchase this article, email Kat Robinson at 7/12/2010 08:53:00 AM