A Break From The Storm at Big Poppa's in McGehee. 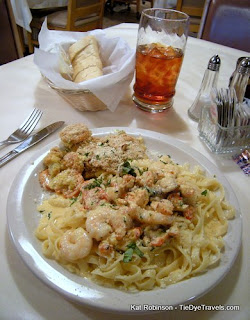 It was a dark and stormy night -- hey, no joke, it was. I was on my way back from a trip to Mobile, AL. It was late (close to 9pm), I was in the hinterlands between Eudora and Lake Village, and I’d just received message that there was a storm front ahead.

Lake Village looked closed down, except for an improbably festival in an empty lot, amusements and the like. I passed on and headed up to McGehee, where the Garmin I was using told me I’d find a place called TK’s BBQ and Burgers. It lead me wrong. 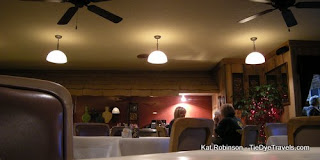 But that was fine. It lead me to Big Poppa’s, a relative newcomer to the burg with a menu heavy on pastas and seafood. In my weary state I did not do my normal good job of taking lots of photos, but I did capture a shot of my 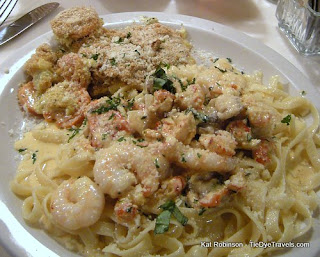 dinner, the LA Seafood Special ($13.99), a hearty dinner, for sure. The generous pile of fettucini is topped with green bell pepper and sundried tomato enhanced Alfredo and a large portion of gently cooked shrimp and crawfish tails. I can easily overlook the 20 minutes of prep time, especially because there was a salad bar to quench the hunger 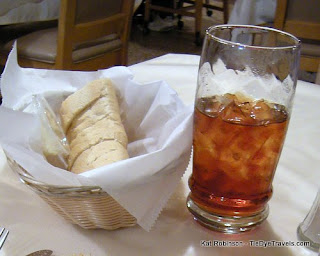 I’d been ignoring since the Alabama state line.

An unusual side item came with this dish -- mixed veggies, but not like I’d ever had them anywhere else. The closest approximation I could give you would be veggie pot pie. The carrots and broccoli and such were encased in a lovely brothy custard and topped with a crumbly crust. And I liked it. Gave the plate much more of a comfort food feel.