Of Hubcaps and Smaller Things at Cotham's in the City. 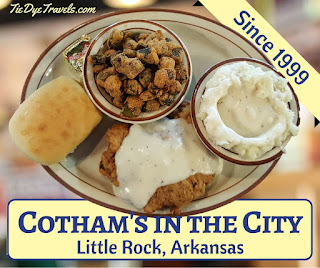 Since 1999, politicians and the movers-and-shakers of the world have been able to take some miles off their pilgrimage to the revered Cotham's Mercantile in Scott - thanks to a cavernous, multi-leveled edifice built within eyeshot of the state capitol. Let's talk about Cotham's in the City. 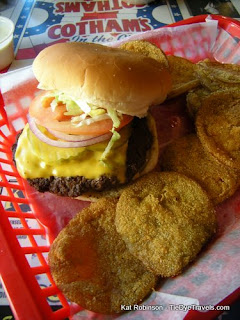 I’m not really sure where this comes from. Perhaps it has something to do with the fact that I’ve been seeing other burgers. Yes, dear friends and readers, I have dallied with other burgers both large and small, sampled the spicing, poked at the buns and made note of whatever’s piled on. Cotham’s is not the be-all and end-all of my burger knowledge.

But to say I don’t like the burger? Now, that’s going way too far. 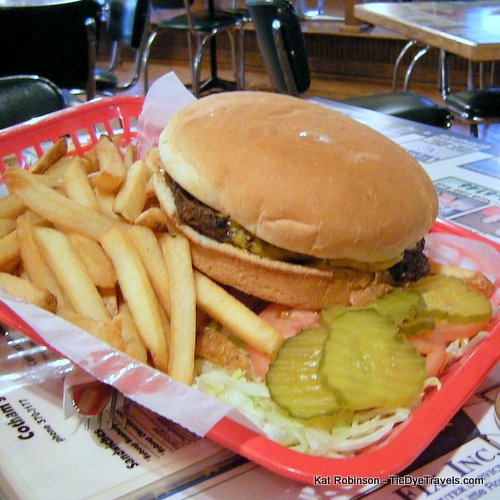 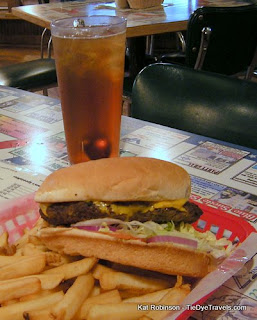 I do like the Hubcap. There. It’s been said. I have even on occasion managed to take down an entire bun-clad plate-filling meat sammy before (though I did leave the fries). It is a decent and respectable though large offering to the meat-and-bread crowd.

But there’s also something that bothers me about ordering a Hubcap. That is, the more Hiubcaps I order, the greater the possibility that my butt will obtain Volkswagen proportions. And I was taught growing up that you shouldn’t order more than you can eat, there are starving kids in Ethiopia (and sober kids in India, though I digress). 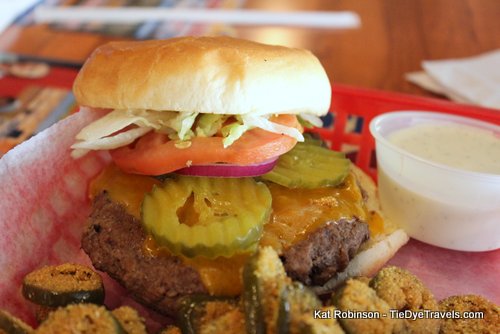 Hence my greater love for the traditional, no-frills Cotham’s Cheeseburger, an unheralded but delicious part to this balanced (somewhat) lunch. A smaller soft bun, a bit lighter on the veggies, and in general a smaller package of meat. But for someone who feels guilty not cleaning the plate, a very filling lunch. There’s something about that Cotham’s spice in the burger that tells you with that very first bite you’re not in some high-falutin’ $12 burger joint, nor are you in the drive-thru at Wendy’s. It’s an Arkansas earthy-ness, a preponderance of black pepper and seasoning tempered by a well-used griddle, a meaty mouthful that mentally takes you down dusty Delta roads in the middle of summer, when the frogs are screaming and the crows are calling. 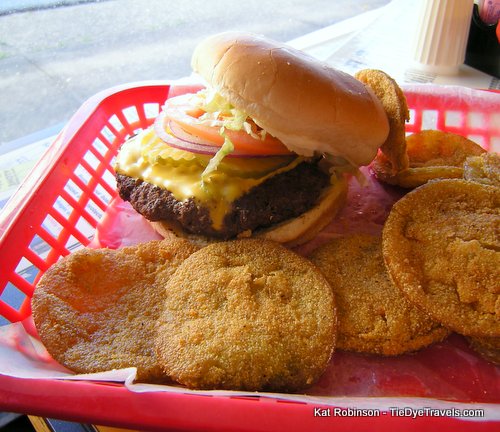 I do wish I could add that same sort of wistfulness to thoughts of the Cotham’s Fried Green Tomatoes… but I can’t. I’m so sorry. Fried Green Tomatoes are a seasonal thing with me, quarter inch thick rounds dusted first in flour then egg then cornmeal and pepper and set to fry up in small batches on the back of the stove. 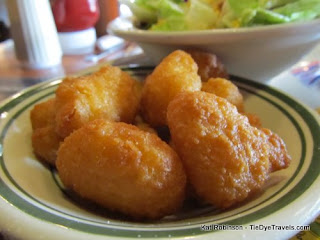 Unfortunately, the fried green tomatoes I have encountered at Cotham’s have been thin, on the greasy side and lacking the firmness I do so love that you can’t get from a full-term ‘mater. Though… serving them up with Ranch dressing does at least make them acceptable. 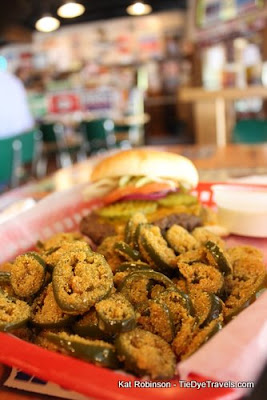 There are other options for sides at Cotham's in the City - such as the marvelous onion rings and the chip-style fried pickles. Fries are thick and straight and not dolled up with batter or spice, they’re just fries, like they should be. Corn fritters are sweet, not really hush puppies but something almost juicy and fun. There's fried okra, sweet potato fries, mashed potatoes and gravy, coleslaw and green beans and even some sides offered by the day, like turnip greens on Thursdays.

Beware - fried jalapenos are also available, as a side or on their own. They're downright dangerous. 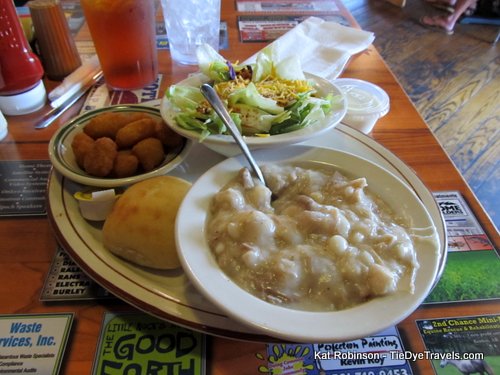 And did you know you can get a daily plate lunch special at Cotham’s in the City? Yeah, for $6.99 they offer meat and two veg during the week. On Tuesdays it's chicken and dumplings, made from scratch. 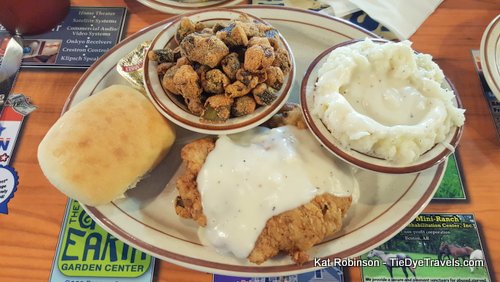 On Wednesdays, it's chicken fried steak. Monday is catfish, Thursday is fried chicken and Friday is fried pork chops. 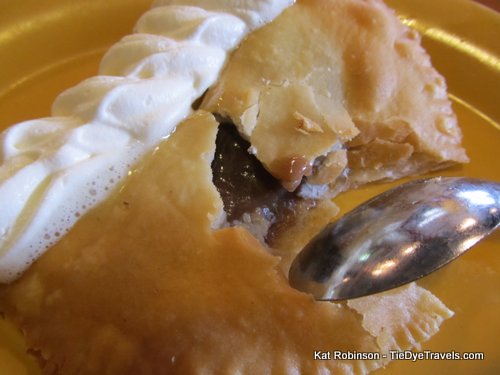 And the desserts? Well, you could go about sharing a gigantic slice of Mississippi Mud pie with your dining companions - or savor a fried pie for yourself. I suggest the latter - in this case, a chocolate fried pie with whipped cream. Delectable.

You can find Cotham’s Merchantile, the original and best location, on Highway 161 in Scott. UPDATE: The original Cotham's Mercantile burned May 30, 2017. 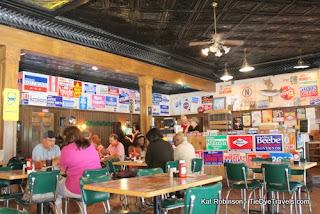 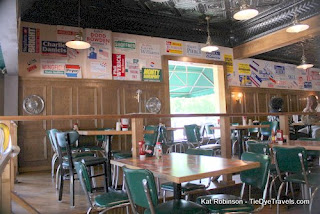 The bonus? The walls are covered with the political memorabilia of dozens and dozens of campaigns, with no regards to political affiliation. Its interior is a veritable museum to such.

P.S. One more thing. I’ve been taking flack lately from a couple of folks who have chided me about my insistence that the Ed Walker’s Giant Cheeseburger (a single five pound meat patty) is the state’s largest burger, pointing to Man vs. Food’s Adam whats-his-name’s attempt to eat a Quadruple Hubcap Burger on TV as proof that Cotham’s has the bigger burger. Well, hrm. For one, the Ed Walker’s Giant Cheeseburger is one big old patty. For two, the Quadruple Hubcap Burger, as far as I know, doesn’t appear on the menu. For me, that’s kinda important.  I noticed on my last visit in May 2017 that the Quadruple Hubcap had indeed been added to the menu. It's still not the largest single-patty burger, nor is it the biggest burger, but holy cow who needs that much burger?

P.P.S. Cotham's has a website, if you wanna take a look.

Email ThisBlogThis!Share to TwitterShare to FacebookShare to Pinterest
Labels: arkansas, Arkansas burgers, Arkansas food, Cotham's, Cotham's in the City, Little Rock, Little Rock restaurants, where the elite meet to eat, where to get a Hubcap burger in Little Rock