The Last Days of the Transylvania Burger.

Progress is something else. It can make someone money, it can revitalize a community, it can even spark a place into being something better. But progress can also pass a town by, dry up business and chase residents away. It’s a sad thing to see, when it happens to something you love. 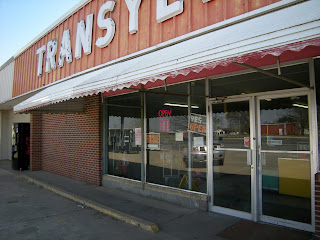 Progress has taken its toll on the little burg of Transylvania, LA. Though the bat-decked water tower still stands over Highway 65, traffic has dwindled off, and visitors whiz on past the sole stop in town to head north to Lake Providence or south to Tallulah.

Years ago, this was the home of the Double Dare Outrageous Burger, a massive monster burger once offered to passers by for less than ten bucks, two massive one pound patties on a big flat bun, glued to that bun with American cheese and served up with an equally substantial amount of fries. The burger is no more, a victim too of progress and the lack of customers stopping in at the Transylvania General Store. 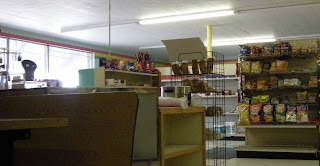 A couple of years ago, I chronicled what seemed like the end of the General Store. Moses Bender was retiring and trying to sell off the business. Didn’t look like it would survive at all at that point. But it did. A new owner came in and took 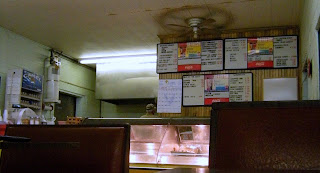 over, offering the same items in the grill. However, the rest of the store has petered down. Where once the shelves held just about every item you’d expect to find in a small town grocery store, including a meat market and dry goods -- now there are empty shelves and section of restaurant. The Transylvania souvenirs are drying up. Some cold beverages are still available, but the current owner is looking to sell again, and it just doesn’t look good for the place.

But a burger does survive there, the original Transylvania Burger, an eight ounce hand patted patty cooked up on a griddle and served up with fresh cut French fries. The single runs $3.29, cheese is another 30 cents and it comes in the combo with drink for $5.39. Doubles are available. 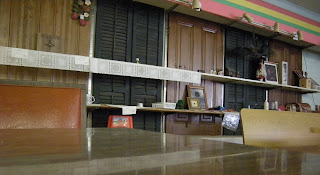 I stopped in one March morning, just after the end of breakfast -- or what there would have been of breakfast, I suppose. One other customer was there when I came through, waiting for his own burger and fries. Fresh hot fried chicken was being pulled out of the fryer and put in the heat case. Otherwise, it was quiet inside. Being a Tuesday, there was talk between the owner and the woman at the counter over a lunch special. I ordered my burger and waited, perusing a left-behind paper. I noticed among all the articles and ads a mention that the Pizza Hut in nearby Lake Providence had gone under. Tough times all around, I guess. 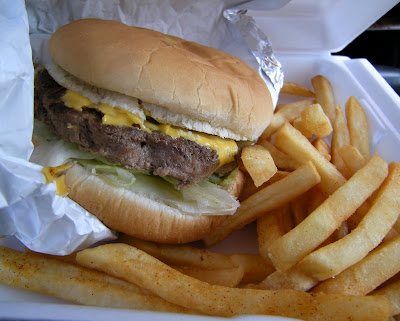 I got my burger to go, since I was on the road and had many miles left to travel. But before I took off, I shot a photo of the big burger in its box. It came wrapped neatly in a foil wrapper with a nice complement of fries, all very hot and fresh. The burger itself was lacking a lot of the nice crusty goodness you get once the griddle has been used all day -- being the second burger of the day, that didn’t surprise me. The cheese glued the top bun down; lettuce, pickle and onion curled up underneath. I noticed the lack of tomatoes.

But you know, it didn’t taste that different from the old Double Dare Outrageous Burger. Still peppery, still enough salt to make it yummy, still just enough grease to make it seem sinful. The fries, lightly salted, were perfectly firm and soft on the inside. My only regret at the meal was that there was no fresh unsweet tea brewed, so I was stuck with Coca-Cola. But that was all right.

It had been two years since I’d swept through the area heading down Highway 65, and I had been surprised to even see the white letters on red metal above that doorway, much less see it open. But without another investor willing to go the distance and put in the work to rebuild the restaurant and advertise it and the good karma of passers-by, I doubt it’ll be there two months from now, much less two years.

When and if it goes, it’ll be a real shame.