Blowin' in the wind. 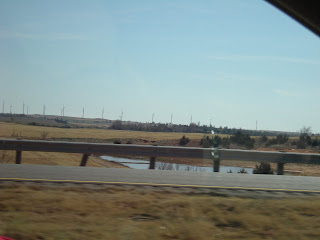 My travelin' companion (my mom) and I headed out to Las Vegas on Interstate 40 on a Wednesday morning in February. We planned to go as far as Flagstaff, AZ the first night, and made it in around midnight. 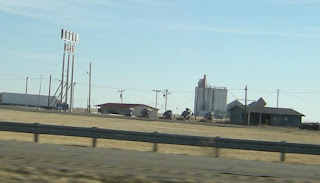 -- a Horse Hotel, a Bug Yard (five hulking remains of Volkswagen Beetles on end), and remnants of Route 66. But one sight kept appearing all along our journey. 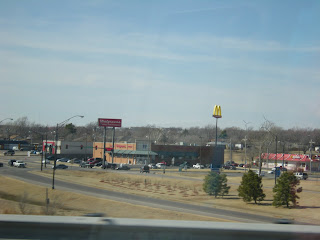 We saw the first one not far across the Oklahoma border. A few more here and there -- and then in a little town called Weatherford we were surrounded.

By what, you may wonder? 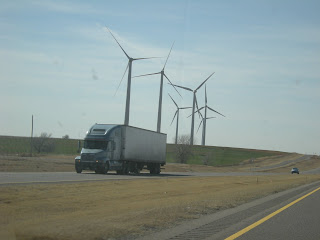 The silent three-armed white giants dot the roadsides all along the I-40 corridor west of the Arkansas state line. They range in size from 30 feet tall to virtual giants, most of them white, all of them gracefully pawing at the air in slow, graceful arcs against the sky. 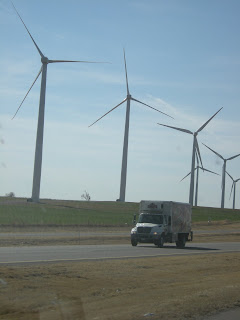 Weatherford seems to have more than its share of the giants.

As we drove along I-40 into town, we noticed a series of wind turbines off in the distance. I was hoping for a closer look, and fortunately, I had my shot.

Each of the 98 wind turbines is 262 feet tall. The blades on each one are more than 122 feet long. The bases are 14 feet in diameter -- and each of these beauties can generate up to 147 megawatts of power. A computerized generator at the top of each one is set to angle the blades so they take the best of the wind each day. 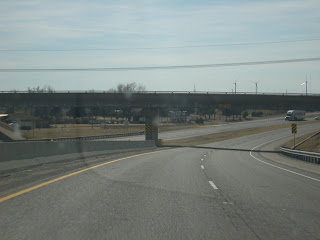 FPL Energy and the Public Service Corporation of Oklahoma got together on the Weatherford Wind Center Project in 2005. Now it’s the eighth largest such operation in the nation, and it provides electricity to more than 44,000 homes.

Weatherford didn’t appear to be that big of a town, and these silent giants seem a bit large. But they are graceful and beautiful -- and they’re not putting smoke into the air or using up coal or even nuclear power. 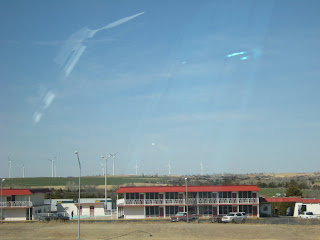 After a while, we passed into Texas, where even more wind turbines graced the fields on either side of the road. They provided a nice counterpoint to dull tan and green fields and a brilliant deep blue sky with its jet trails.

As we passed into New Mexico and saw yet more of the silent giants, I started wondering…

Wind turbines aren’t just something that big cities and big corporations can afford. With a little help, the rest of us can, too. A residential wind turbine system costs an average of $6000 to $22,000 per home. That may seem like a lot right now, but think about your electric bill… 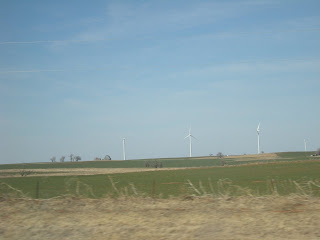 Seeing all those wind turbines spinning in the breeze like so many pinwheels in the sky, just made me wonder one thing.

Why aren’t there any along Arkansas’ roadways?

Seems to me there’s plenty of wind available along I-40 and I-30 and Hgihway 65. I could envision the gentle giants peacefully spinning atop Crowley’s Ridge or out in the fields near Eudora, no sweat.

And there’s always a lot of wind at the Legislature to think about, too.