Alcenia's Home Cooking is Better Than A Lot of Memphis Barbecue. 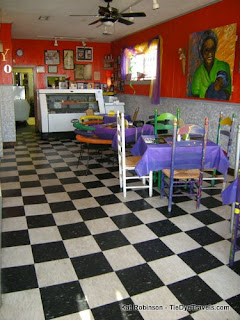 This little soul food cafe called Alcenia's is a truly comforting restaurant that brings tasty vittles to the table. Stop in when you're in Memphis.

Actually, that's quite a generalization. In my three years in Jonesboro in the mid-90s, I traveled to Memphis numerous times -- to visit friends or to enjoy the comfort of a good football game and a nice hot bowl of potato soup at T.J. Mulligan's at Kirby and Quince. I didn't make my first pilgrimage to Graceland until 2002, when my mom and brother and I decided it was time to see what all the fuss was about. And why did I need to go to Memphis for barbeque when there was great barbeque right here in Little Rock?

But I do love good food, and during my stay in Memphis in January I made a point of trying out just about anything I could find that wasn't connected with some big national chain.

Of course, I was using the appropriate Memphis tourist book to look for my next location. But when I confessed the reasons for my trip to different people along the way, I kept hearing the same thing.

"Now, if you want the real thing, you don't want to go no over there," a lady at the trolley stop right out front of the Center for Southern Folklore told me. "You want to go see Miss B.J. down at Alcenia's."

"I know you're looking for a good place to review," the nice, white collared guy told me in Swig's Martini Bar, "but you need to check Alcenia's out. It's tacky, but the food is really, really good."

"Yes, Dolores, it was really good fried chicken. We're going back as soon as you get into town," I overheard in A. Schwab's General Store.

"Yes, Mrs. Robinson, it's just down the trolley tracks. I usually go down once or twice a week. The Ghetto-Aid is very, very sweet," said the nice hotel clerk at the Sleep Inn when I asked him about it that particular Wednesday morning. 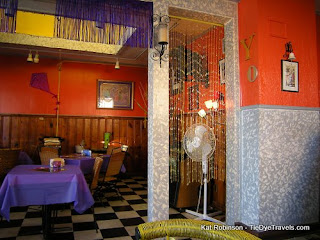 Well, it might not be something you see in all the tour books (mine showed a listing, but also said they were open for breakfast -- which they're not, six of the seven days of the week), but I needed to go check this place out. It needed to be seen and tasted.

I almost hopped a trolley from the hotel, but reasoned the day was nice, if a little blustery and cold. I hiked up the scarf around my ears and headed north along Main Street.

The way was buzzing with workers on a construction site, locals trying to walk from car to job, and a few panhandlers. Two of the trolleys passing my way slowed down to see if I was going to jump on, but I waived them off. 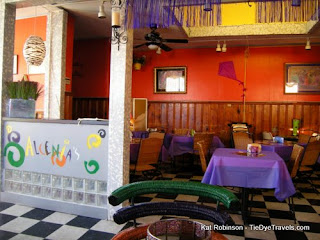 Several blocks and an interstate overhead later, I arrived at the unassuming building. From outside, it doesn't look like much.

It was straight up 11 a.m., so I tapped on the door. A gentle woman came to the front door, peered out, and smiled at me. She let me in and told me I could take my seat at any of the tables.

The color overload was immediate. Alcenia's is decked out in bright colors, lots of plastic, lots of eye-popping things to entertain the brain. From the wicker chairs to the purple plastic tablecloths to the deep orange walls, everything swelled with color. It was like looking into a packet of gumdrops. 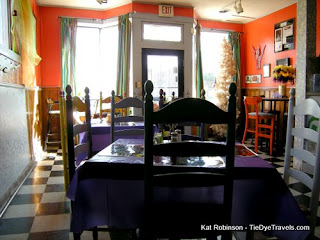 I took a seat at a table near the kitchen. My waitress guided me through the menu, telling me about the additions for the day -- baked tilapia, yams, macaroni and cheese, cabbage, and green beans. The menu listed fried chicken (white or dark), pork chops, barbeque chicken, and catfish as the day's platters -- with sides of meatless spaghetti, corn on the cob, and lima beans. The waitress suggested Ghetto-Aid, but I went with the iced tea instead. I wanted to save my sweet tooth for something better. 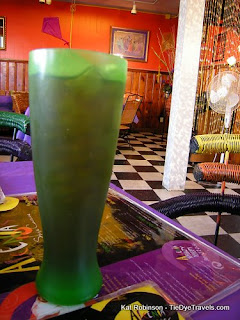 The restaurant was just getting started for the day. I heard voices in the back -- a man, a woman, and my waitress. They were going over the day's menu, and I could hear sizzling and dishes clattering. The smell was heavenly -- that nice scent of a roux being cooked, flour being roasted to its prime. Delightful.

Out of the kitchen comes this little powerhouse of a woman. This would be B.J. Chester-Tamayo, the proprietor. She came over to my table, asked me where I was from, and chatted with me for a while. She made sure I had my tea and started telling 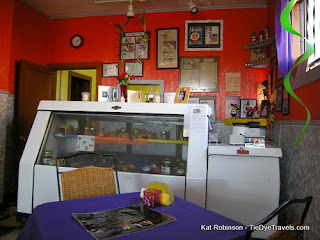 me about the food today. She told me if I missed out on the yams, that would be a mistake, and I agreed. I went ahead and also ordered the dark meat fried chicken and the lima beans.

B.J. had to make sure to come over and give me a hug and a peck on the cheek. She's an exuberant woman, full of fire and energy and completely genuine. 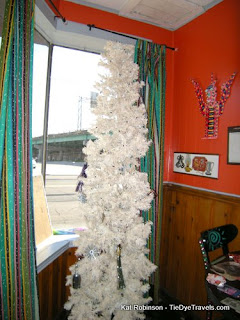 I was immediately won over. She was spicy and wonderful.

She ducked back into the back, then poked out and asked if a leg and thigh were all right. Well, of course they were!

While my food was being prepared, I got up and took pictures. A guy came through from the kitchen and started to dismantle the old white aluminum Christmas tree in the window. 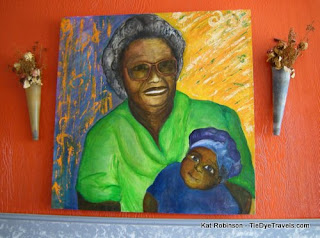 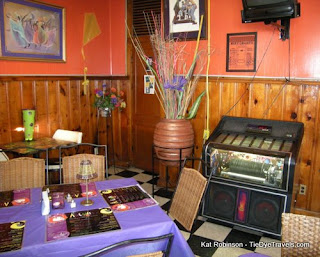 I looked some more over the menu. The menus stay on the table -- they're laminated, like placemats. I suppose they're there to tempt you some more. I almost considered adding an order of fried cucumbers to my order, but changed my mind when I saw the desserts. Pound cake, sweet potato pie, pecan pie... all sorts of good
stuff. And that bread pudding? I'd been told it'd been voted one of the ten best desserts in Memphis. 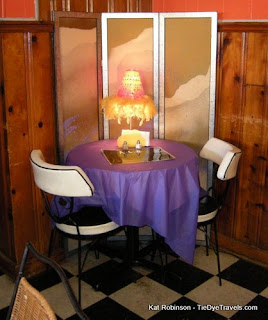 And the Ghetto-Aid. Well now. Ghetto-Aid's just Kool-Aid -- that's about twice as sweet. My husband would love this stuff. Me? Not so much. But it is the drink especiale at the restaurant, so if that's your cup of tea (which mine actually was tea), go for it.

A couple of ladies came in and sat down across from me on the other side of the big room. They ordered without looking at the menu. They chatted happily away while our waitress kept an eye on us. 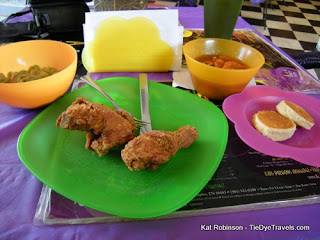 And then, very suddenly, the waitress and B.J. both came out, plates and bowls in hand. The bright colors on the walls were nothing compared with the jolly Tupperware that greeted me here. I looked at B.J. with a little suspicion when she handed me utensils with my fried chicken. 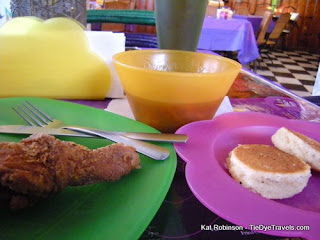 "Ma'am, I'm a good Southern girl. I eat fried chicken with my fingers."

"That may be, but I am sure you're gonna want something to eat those yams with." She chuckled and smiled at me, and poked back into the kitchen.

The chicken was too hot to handle, steamy hot from being fried in a skillet. The aroma was incredible. I used my knife and fork to ply open the thigh and take a picture of the rich meat within. The scent was heady. 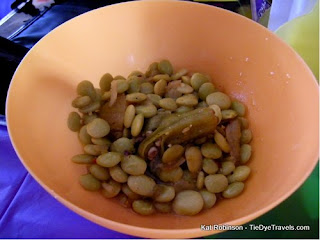 I peered down into my ample bowl of lima beans. Now, I like lima beans, unlike just about anyone else in my immediate family. But usually in restaurants they're cooked with a little ham, and I have to pass. Not in this case. The beans had been cooked with pickled okra, tomatoes, and cha-cha -- a Southern relish that's considered a delicacy. I tried a bite, and was delighted with the balance between sweet and salty.

But it was the yams that really won my heart. 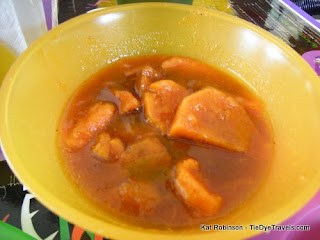 Instead of the overcooked, pale orange lumps you see at buffets, these had been caramalized with brown sugar, nutmeg, cinnamon, and butter -- and no water at-all. They were sweet all the way through, full of flavor and rich enough to discourage anyone from dessert. 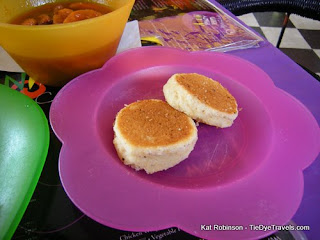 The hot water cornbread pucks were also sweet -- not as sweet as the yams, but still sweet -- with just the right balance between cornmeal and flour. This is dunkin' cornbread, and would have been even better on a hot afternoon with a cold glass of milk. As things were, they were divine. 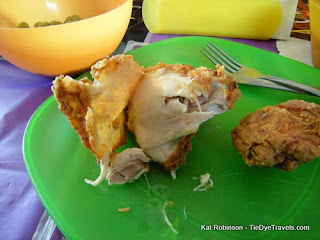 And the chicken... full of flavor, and not as greasy as I had expected. There was plenty of juice inside. I also savored the crusty flour breading, with a nice touch of salt and pepper and what may have been sage inside.

She laughed heartily, and told me I needed to get over and sign that guest book when I was done -- no hurry! I sat back and consumed my repast, taking my time and listening to the chatter. 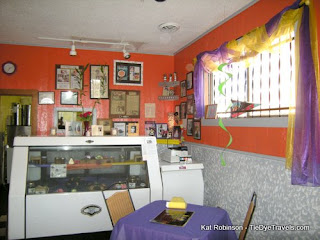 I tried -- I really tried -- to save room for dessert. But between the savory chicken, the well spiced beans, the sweet yams and the perfect cornbread, I couldn't. I actually had to refrain from sopping up more of the yam sugar sauce with the last of my cornbread. I hadn't had such a good meal in a long while. 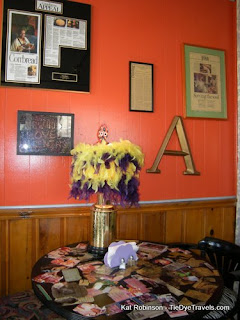 When I started to gather my things to go, B.J. came out again to thank me for coming by her restaurant. Now, she didn't know me from Eve, and had no idea that I do what I do for a living. I was just a gal from Little Rock who'd come in for a bite to eat. But I left feeling like I'd made a new friend.

The plates at Alcenia's are reasonably priced -- $5-8 for just about anything there. The restaurant is open Tuesday through Friday for lunch and early dinners, and Saturday for breakfast and lunch. 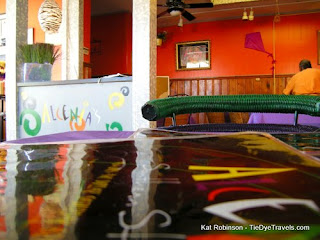 Alcenia's Desserts and Preserve Shop can be found at 317 North Main Street in downtown Memphis -- barely north of the underside of the Hernando De Soto Bridge on I-40. You can call (901) 523-0200 for more information. And... prepare to be hugged.

UPDATE: I went back again. Read about it here.