Food for the Belly and Soul at Trident Bookstore and Cafe in Boston.

It's not often that you find books in a restaurant review, or French toast in a bookstore. But the pairing of the two seems organic, even necessary at Boston's Trident Bookseller and Cafe.

I stumbled groggily all the way from Copley Place to this three story red building along Newbury Street on a chilly Tuesday morning in January. After life in Arkansas' moist climes, the dry air of New England was taking its toll on my throat, and I needed the comforting resonance of good tea.

I'm sure I could have found something almost, but not quite, entirely unlike tea. I trodded past Dunkin Donuts, passed cutsie coffee klatches, and swung around Starbucks. I was going on the blind hope that the kind recommendation of a passerby, a young woman wrapped far more appropriately for the cold weather, could guide this shivering soul to a place of warmth, gratitude, and good grub.

The demure little shop could be hard to miss, tucked in among all the other shops in their almost identical red three story brick buildings with matching bay windows and wrought iron fences. But my erstwhile guide's tip on its location on the south side of the street steered me straight into the doorway and through to a wonderful world of literature and hot beverages.

The idea of combining bookstores and coffeeshops is common now, but it wasn't when Bernie and Gail Flynn opened Trident Booksellers back in 1984. They had a pretty good idea, too -- because back then, there really wasn't a place around where you could peruse books and magazines while sipping on your cuppa joe. Today, sure, you can go to Borders or Barnes and Noble and drink expensive beverages... but that's not the same thing. 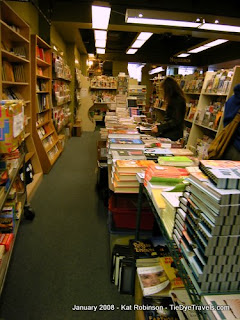 It didn't take long for the register clerk to recognize that my booted, exhausted self was in need of attention. He directed me over to the seating area, where a kind soul named Richie seated me and asked my desires. I blurted out "tea!" in my bleary state, and he presented me with a menu with an entire page of tea varieties -- good strong black teas, delicate greens, odiferous herbals. Though the wild mint and the Yerba Mate both drew my interest, nothing was going to get me stimulated like a good black tea. I asked for lifesaving Assam Irish Breakfast tea, and Richie scuttled off, leaving me to consume a menu of extraordinary breakfast foods.

The desire to share good literature apparently extends to the menu itself. I found myself immersed in the writing, consumed by thoughts of Eggs Benedict with avocado instead of Canadian bacon (either way, $11.95), Smoked Salmon Scramble (also $11.95), and the enticing eggs-mushroom-chives-tomato-onion-cheddar combination of Breakfast Strata ($9.95). But then the words of my guide came back to me.

"You have to try the French toast -- any of them," she had encouraged.

"You mean there's more than one?" I asked, and was answered with a giggle.

"Of course! And they're made with challah bread!" she'd replied.

My eyes wandered into the second column of the menu -- and there they were. Right along with the malted Belgian waffles and buttermilk pancakes were dreams of French toast -- challah bread dipped in cinnamon egg batter and served up with fresh fruit. My eyes dipped further, and I found my pleasure in the Lemon Ricotta Stuffed French Toast ($9.95) -- topped with blueberries. My search had ended. 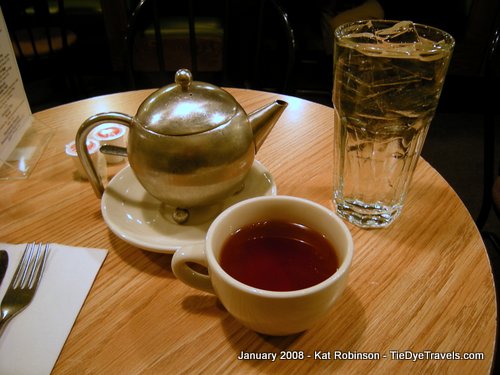 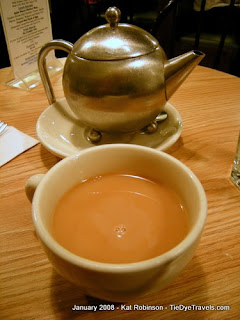 Richie came back with teapot and cup in hand, asking my order. My eyes searched the menu again -- perhaps a bit of protein would also help along this spent traveler. I saw an old favorite, Corned Beef Hash ($4.50), and went with it. And the French toast. I needed all the help I could get.

I gently poured the tea into my cup, savoring the warmth of the pot and the effervescent thrill of tea vapors entering my lungs. I tasted a bit of the mahogany beverage, and lost myself in the robust intrigue. Satisfied with my choice, I added a bit of half-and-half and indulged in more tea-savoring behaviour. 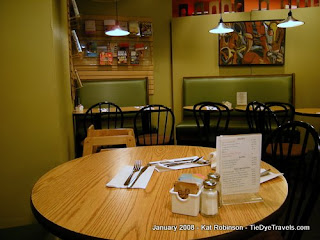 The color was starting to return to my world. I looked around. Across from me, a couple of guys were engaged in a heated exchange over a column they'd both read in one of the local papers. Two seats down from me, Richie kept checking in on a young woman who was seeking solace from a sore throat in a similar beverage. All around me, the room hissed comfort at me -- soft green booths, warm lights, lots of wood. 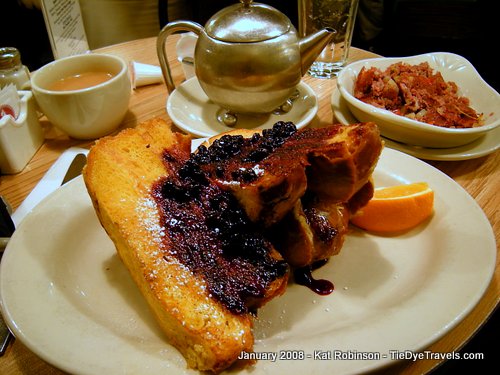 Richie left again and returned with two plates. I was stunned by the size of the French toast. At first, I thought I was glimpsing a monolith. Clearing my head, I saw four distinctive, large wedges of French bread, crispy on the outside and doused with blueberries. The scent was delicate, yet hearty. 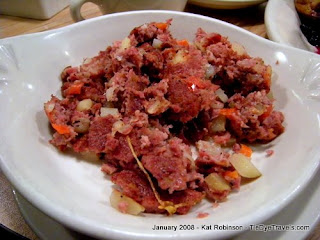 But it was the corned beef hash that truly surprised me. As a Southern girl, I'd had my fill of truck stop and roadside diner hash -- a conglomeration of warm meat and potatoes that usually came from a can marked Armor or Hormel. This was an entirely different beast. Flaky corned beef (I had no idea corned beef could be flaky) nestled in among slivers of carrots, chunks of soft potato, and snippets of sauteed onion. The dish wore a smattering of fresh ground black pepper flakes like a light scarf. The meat was savory -- and still quite resembled meat. It was a breakfast in itself, and I found myself unable to resist consuming it all. 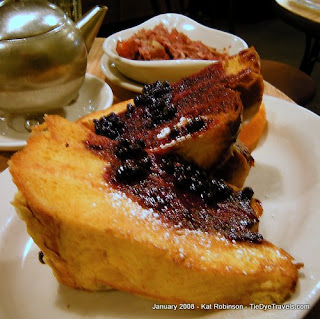 The Lemon Ricotta Stuffed French Toast, though, was even more of a masterpiece. The outside of the hefty slices was both crispy and a little chewy -- yet inside, the ricotta had created an almost cheesecake-like texture, full of smooth flavor. No heavy lemon custard here. The inside was light enough to almost be considered lemon-scented. The blueberries in their sauce were a worthy accompaniment. Yet, despite its lightness, I found myself laboring to finish. This, after all, was some great expanse of French toast, mountains of challah bread even the sturdiest college kid couldn't quite surmount.

Richie came over again and again to make sure my breakfast needs were met. I finally asked him what drew him over, and gave his two-fold answer -- it appeared I was weary, and -- a surprise to me -- he was trying to determine the origin of my accent. When I shared that I was from Arkansas, he engaged me in a light discussion of Hillary Clinton, Barack Obama, and the wonders of an Ozark spring. Up here they dream of warmer weather, too. 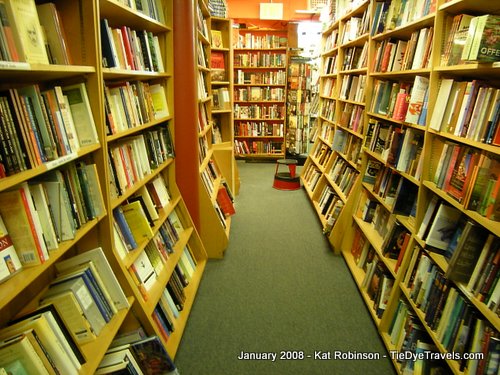 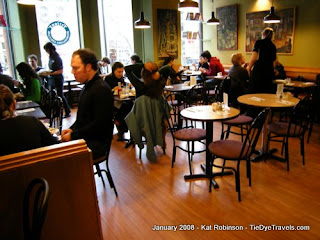 Never in my two hours there did I feel rushed. The atmosphere was relaxed, more like a late night study session than a mid-morning respite. Once I had thrown in the towel on breakfast and sipped my third cup of tea, I retired to the stacks and shelves of books, finding myself lost in good titles and authors. Only a looming deadline and the knowledge that all of Boston could not be savored within a single bookstore kept me from staying longer. 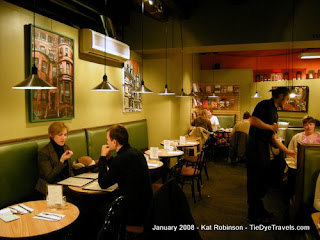 Trident Bookseller and Cafe serves up perpetual breakfast, along with lunch treats and dinner specials. The tea selection is fantastic, but for those who jones for java, there's also an espresso bar and all the fancy coffee drinks you might find yourself desiring. And this is definitely the one place you'll be able to enjoy your book and beverage in peace. 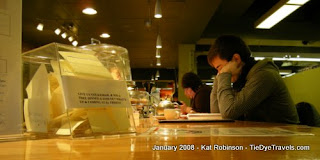 UPDATE 9/7/17.  It's been nearly ten years since I met Richie in that coffeeshop. I'm still flattered when I think about this polite gentleman who just wanted to hear me speak.

Trident Bookseller is still there on Newbury Street, and the first image I saw on its website was that remarkable French toast. If I ever make it back to Boston, I will make a point of stopping in again.

Updating to correct some photo color, add photo credits and a Zomato link.