Jefferson, Texas Has The Last Laugh. 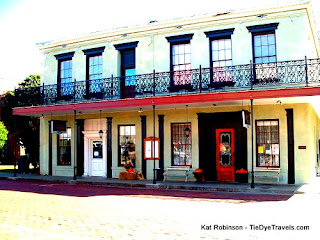 Maybe not deep in the heart of Texas, but not too far from Shreveport and Texarkana, you'll find the tiny burg of Jefferson.

Tiny, today, but not always such a small part of East Texas. Because this used to be a place where commerce was King.

Jefferson was a busy riverport town. It was the jewel of the Big Cypress River, the "Riverport to the Southwest." It boomed, and boomed big, back in the heyday of the riverboat. From 1845, when Big Cypress Bayou was cleared for boats -- to 1873, when the Red River Raft was destroyed by the Army Corps of Engineers, Jefferson was the place to be. But some say the town was cursed, and is just now waking from a 125 year slumber. 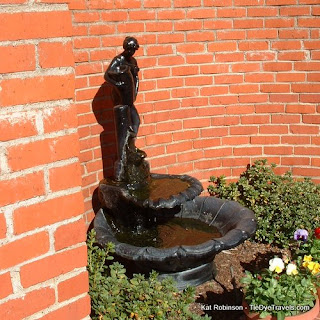 Thousands flocked here to take advantage of the trade during the boom times. Cotton was being sent downriver, home furnishings upriver, and people were coming and going left and right. Tens of thousands of people came to Jefferson and made it their home for a while. Hotels cropped up for people to have a place to stay. Restaurants fed folks. And other businesses got started here.

One of those places is the historic Excelsior House Hotel. 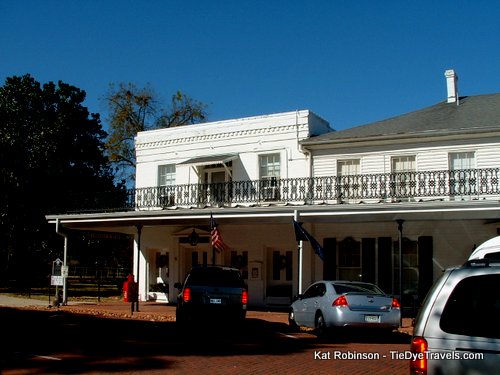 This two story white hotel on West Austin has been in constant operation since the 1850s. Its historic register includes entries from guests such as Rutherford B. Hayes, Ulysses S. Grant, and Lady Bird Johnson. It also counts among its previous guests one Roscoe Conklin, a grand orator, and the author Oscar Wilde. It is yet another entry into that register, though, that the curse is attributed. Back in 1874, railroad magnate Jay Gould made the city of Jefferson an offer -- he wanted to put a hub for his new railroad empire right in town. He wanted to run a rail line down the town's busiest street, but Jefferson was having none of that. Gould was incensed, and declared that grass would grow in the streets and bats would roost in the belfries. He took his idea to another town, and departed. In the register for the Excelsior House, Gould reportedly wrote "The end of Jefferson!" Whether or not it's his mark is a subject for debate -- but the decline in water levels in Big Cypress ended the steamboat boom, and the ensuing ebb of population out of town made Gould's curse seem plausible. 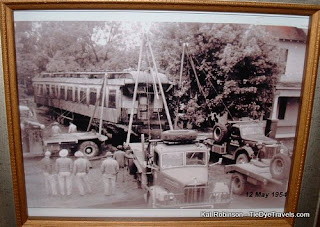 That town Gould went to? A little burg named Dallas. I guess you can say that was a mixed bag.

But Jefferson may have the last laugh on Jay Gould -- for many reasons. 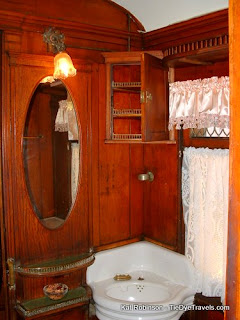 In 1953, the Jessie Allen Wise Garden Club purchased a 1888 railcar manufactured by the AmericanCar &a mp; Foundry Company of St Charles, Missouri. Jay Gould had utilized it as his own private car until his death in 1892 (it would have been weird if he'd continued to use it after that date). It was then used by his son, George Jay Gould (President of the Texas and Pacific Railroad), and his wife, actress Edith Kingston. It stayed in the family until the 1930s, when it was converted to a private residence. 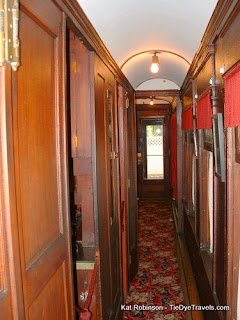 The car was brought to Jefferson in 1954, and a careful restoration of the Atalanta began. The posh car has two observation rooms (one at each end), four staterooms, two baths, a butler's pantry, a kitchen, a dining room, and an office. The railcar is resplendent in maple and mahogany woodwork, in crystal light fixtures and silver accents. 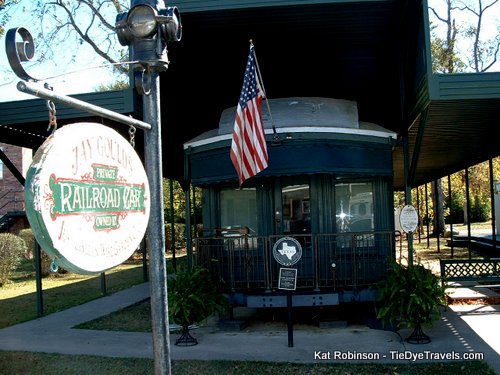 Today, you can tour Jay Gould's Atalanta by going to the Excelsior House Hotel. Tours run several times a day, a dollar for adults and half a buck for kids. For more information, call (903)665-2513.

Gould's offer, refusal, and prognostication weren't the only big news of the 1870s in Jefferson. Another incident shaped the face of the town and the legal world as well.

In January of 1877, a "Mr. & Mrs. A. Moore" of Cleveland, OH checked in to the Excelsior. Over two days, they were seen about town, eating and walking and arguing. He called her Bessie (among other things too awful to print) and the locals made note of her diamonds and jewels. Diamond Bessie quickly became the talk of the town.

The two were last seen crossing a bridge together, picnic basket in hand, on January 21st of that year. The man returned later by himself.

His name was Abraham Rothschild. He was the son of jewelers and the black sheep of the family. He kept company with women of less than eminent stature, and ended up with Bessie after a sojourn in Hot Springs, Arkansas.

Rothschild was seen about town for a few days, and some say he was wearing some of Bessie's diamonds. He swore she'd gone to visit relatives -- and then left town with all of their luggage on an eastbound train.

On February 5th, a young woman ran into town to report a well-dressed corpse amidst the remnants of a picnic. Diamond Bessie was found with a gunshot wound to the head and no diamonds to be found.

A search ensued. A hotel clerk in Marshall reported that a similar couple had registered under the Rothschild name, and a warrant was issued. Shortly before Rothschild was apprehended in Cincinnati, he attempted suicide, but was only successful in putting out his right eye. He was brought back to Jefferson for trial. 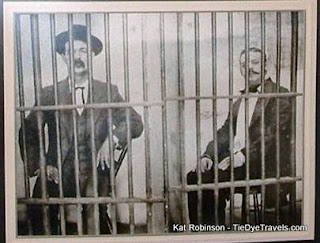 And what a trial. The Rothschild family, eager to keep the family name clear, hired ten attorneys to defend their black sheep. They sought a change of venue for their client, noting that the townspeople had so rallied to the cause celebre that they'd even allegedly paid the way for the town's sheriff to travel north to arrest Rothschild.

The case went to trial in December 1878 in Marshall. Rothschild shared a cell there with Jim Currie, a railroad employee who had shot two actors, killing one. The wounded victim was actor Maurice Barrymore.

The trial ended in a conviction -- in a rage of emotion so strong that the jury foreman reportedly drew a noose on the wall and hollered "that's my verdict!" But an appeals court threw the verdict out. 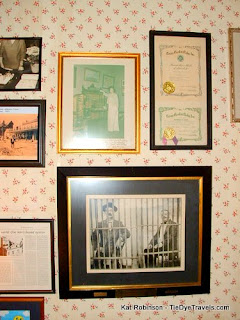 Again justice was sought, and Rothschild went on trial again, this time in Jefferson in December 1880. He never took the stand, and his attorneys shredded prosecution witnesses. After the second lengthy trial, he was acquitted, and faded into obscurity.

The Diamond Bessie Murder Trial is performed each year at the Jefferson Playhouse. And the procedural defense of double jeopardy would have prevented a second trial in later years. 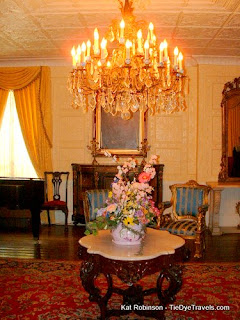 Much of the Diamond Bessie trial is covered at the Excelsior House. There's a parlor with all sorts of framed clippings and photographs of ages past. In fact, much of the history of Jefferson is encapsulated here.

Much of the grandeur, too, as evidenced by the hotel's grand ballroom and dining room. Each room is decorated in fine French chandeliers and gorgeous Oriental rugs. These rooms have hosted some of Jefferson's most hoity-toity goings-on over the past 160 or so years, and they are still in fine condition. 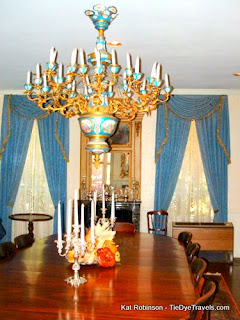 Receptions, galas, and special dinners are held here throughout the year. And each morning, a Plantation breakfast is served up to guests. It's a gorgeous place to dine.

But in better weather, the courtyard has its own allure. 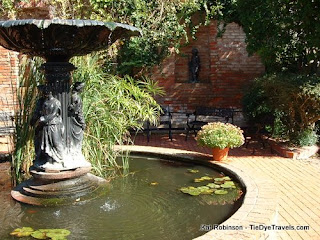 The bricked courtyard with its ebony fountains and lush growths of vegetation lay somewhere close to Midnight in the Garden of Good and Evil, yet the fine exposure to the sun is warming and welcome. Large goldfish and koi fight for the attention of passers by who might fleck them a morsel. 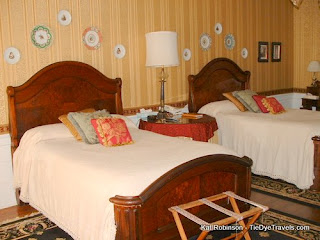 Of course, there's no better way to get to know the Excelsior House than to stay in one of its many rooms. For instance, the Grant Presidential Room, with its two double beds. A picture of Grant and his family was reportedly once traded for a night's lodging here. 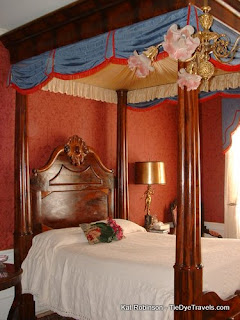 Or the Hayes Presidential Room, with its full tester bed made of tiger mahogany and bearing four Cloverleaf posters. And then there's the bridal suite, named after Diamond Bessie. 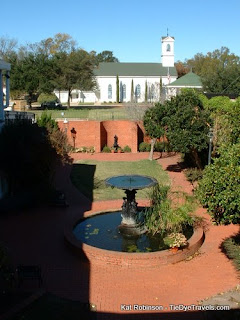 A long porch on the second floor overlooks the courtyard. You can easily imagine the peace and tranquility within its bricked walls.

You can still stay at the Excelsior House Hotel in Jefferson. It's going strong. And the community Jay Gould once said was doomed has come back to make the town a historic destination in East Texas. The town's population stands around 2200, and there are more than 60 lodging choices for visitors. There are several museums, neat places to shop like the Jefferson General Store and Old Fashion Soda Fountain, a good 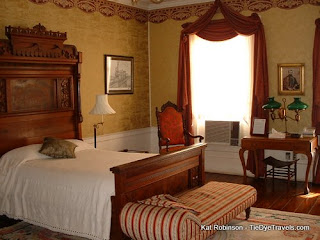 number of really good restaurants, the Historic Jefferson Railway, and much more. It's a great place for a romantic weekend. Just be sure to give yourself plenty of time to check out downtown.

UPDATE 9-13-17. The Excelsior House is still in operation, and you can still visit Jay Gould's railroad car. Visit the Jefferson, Texas website for more of what to do in this great little town.

Tour the House of the Seasons.
Explore a museum dedicated to Gone With The Wind.