If the term “Mother Road” means anything to you other than the route to your parental unit’s home, you probably know about the Cadillac Ranch. 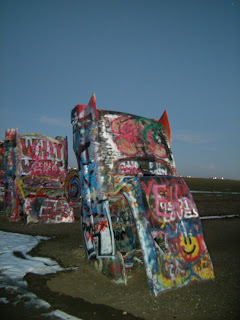 This uniquely American edifice stands proudly outside of Amarillo, Texas off of the south I-40 frontage road. Ten aching, tired, hollow Cadillac hulls stand morosely protruding from the ground in the middle of a cow field.

This particular frosty February Monday we were headed home from a drawn out trip to Las Vegas. The weather had been unpredictable and worrisome -- in the upper 60s when we left Las Vegas, the mid 60s when we hit Needles, the low 50s at London Bridge, and the mid 40s when we stopped for gas somewhere short of the Arizona-New Mexico border. 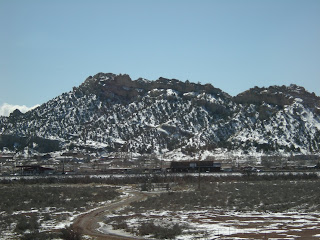 Right after the border crossing, flurries appeared, and we ended up staying overnight in Gallup, NM at a rather large and clean Best Western.

Up bright and early the next morning, we captured glimpses of the weather on the Internet (I suspect that the 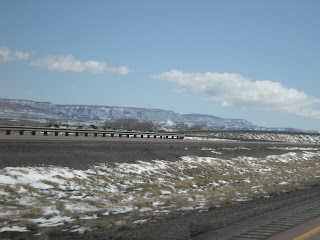 weather prevented us from properly receiving a signal -- there was snow and ice out there, and chances are it had accumulated on some tower or another). We tried to decifer the Weather Channel and queried folks coming in through the lobby. But something was telling us it was time to go. 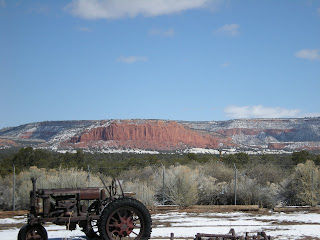 We hit the road around 10:30am, and attempted to make good time.

There is no quick way to travel to Little Rock from Gallup, New Mexico. It is a long journey, whether you’re headed east or west, and we found ourselves frequenting Dairy Queens along the way for the appropriate knoshes for the trip -
jalitos (jalapeno 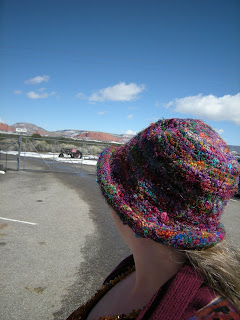 strips
deep fried like onion rings), burgers, and ice cream creations we normally would not have considered.

As the hours and the miles slipped past, we crossed the Continental Divide, marveled at the beauty of Albuquerque’s interstate art, ogled the distant buttes and mountains sprinkled with snow, and found a few souvenirs to take home. 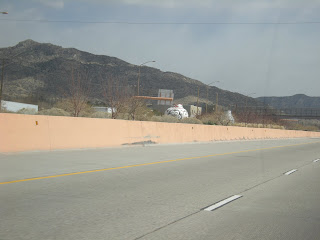 There was a point around I-40 mile marker 367 in New Mexico that both of us could have sworn the Texas border was moved just to irritate us.

As we crossed over, we kept track of the mile markers. We knew at sixty miles in, it was time to revisit old Route 66. 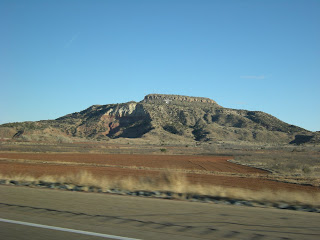 Turning off the pavement, sunlight escaped our path, and we peered distantly into the horizon to see if we could see the ten monoliths out in the cow pasture. 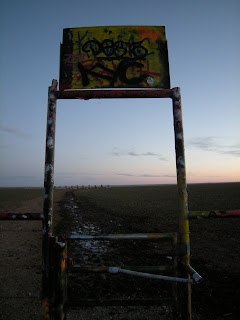 About halfway between Exit 60 and 62 on the south side of the south frontage road, there’s a gateway that’s been graffitied up with all sorts of colors. Beyond it, lies a well traveled footpath, where tennis shoe treads and cow hoof prints intermingle on their way to Americana statuary. 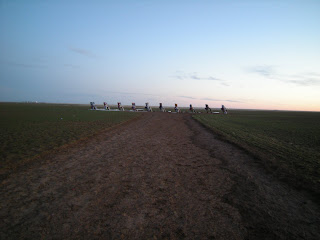 I jumped out of the car, leaving behind cell phone and computer, armed only with my hat, my scarf, and my trusty Nikon Coolpix. Time was short, the distance was far (about the length of a football field) and the sun was gone. I started snapping away as quickly as I could. 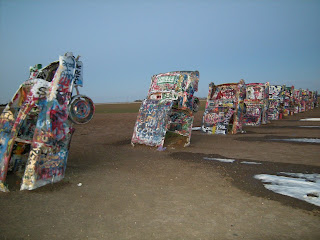 My traveling companion (my mom this time) had watched as I entered the field. She also noticed the same thing that I did -- that there was no fence to keep cows from people. And she noticed the lone cow that started to follow me.

So here we were, me walking fast and catching 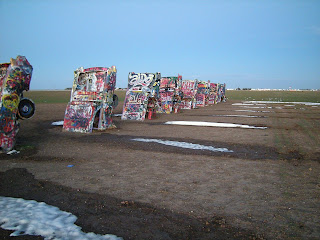 distant pictures as I walked up to the attraction; a cow following me, what nefarious thoughts it must have had to remain concealed from my knowledge; and my mom, running after the cow. The cow veered off and left me alone.

I finally reached the ten 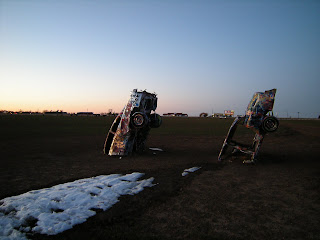 standing cars, and noticed right away something that shouldn’t have been right. Each of these desolate, abused vehicles has little left to show that they were cars, much less Cadillacs. But with the application of layers and layers of graffiti by folks 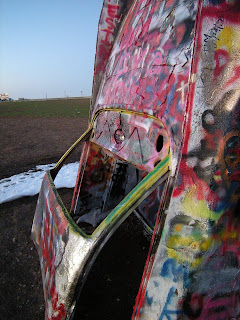 who have come by to make their own mark on history, they’ve gained a halo of color that rivals my own tie dyed path.


I tried several different exposures and settings with my camera, hoping to capture the best essence of the place without losing focus -- literally. I used the waning evening as a backdrop, letting the sun’s last rays filter through wheel hubs and window frames for the most appropriate shots.

As I snapped away, capturing as many shots as I could in my limited time, my hands started to tingle from the cold.

When we left out from Little Rock the Wednesday before, it was too 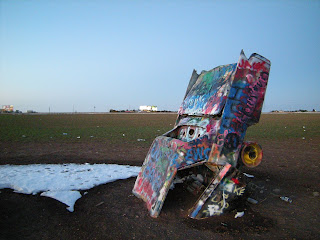 warm for my light jacket. Here I was in two jackets, two shirts, and two pairs of socks (yes, I was wearing jeans, too!) and my hands were left to handle the cold as I flicked around, moving and freezing, capturing more than 60 shots in about five minutes time. 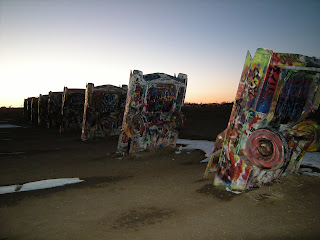 I was thinking about my gloves, which I had left sitting on the back of the recliner when I left the house. Ah well.

In case you don’t know the history of the Cadillac Ranch, let me enlighten you a bit. It was originally erected way back in 1974 (in my first year of life!) by Stanley Marsh 3, who created this bit of 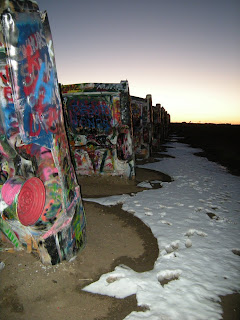 art along the road with the help of the San Francisco based Ant Farm, a collective of folks who wanted to represent the Golden Age of automobiles. In 1997, with Amarillo rapidly expanding westward, it was moved to a cow pasture further out. Every couple of years, all the cars are painted one single color (white, pink, or whatever suits someone’s fancy) to give artists a new, fresh canvas. They’re all standing at the same angle as the Great Pyramid of Giza in Egypt. Talk about your arty ideas.

There weren’t any signs to the site, 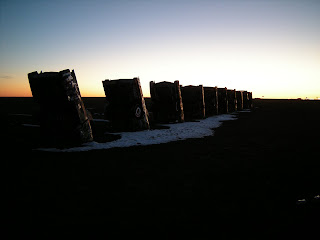 at least none that we could see. Just a brightly colored gate to a cow pasture.

As I headed out of the pasture, I looked up and noticed that someone had taken the back of the gate and written a salutation up there. It seemed like an appropriate end to the journey… 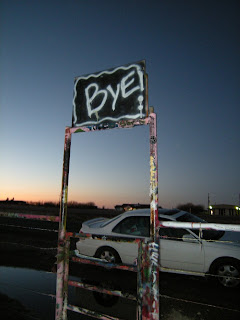 Except, I noticed this sign a few feet away from the gate and a similarly painted dumpster. I thought it might be interesting to show. 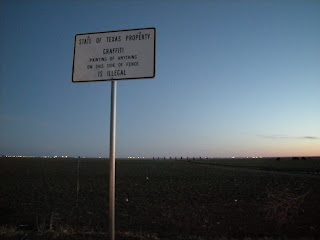 The sign reads:
State of Texas Property
Graffiti
Painting of anything on this side of the fence is illegal

You can find the Cadillac Ranch just to the west of Amarillo, Texas off the south frontage road of Interstate 40, halfway between exits 60 and 62. And if you bring spray paint, take your cans home with you. Along with your beer cans. 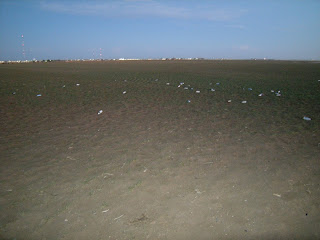 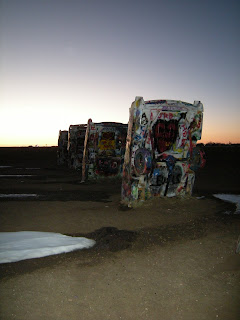