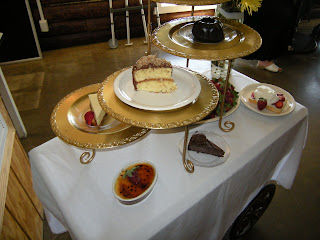 Skip's on 43 keeps its desserts by the door, so you can see them when you walk in. You have to give them a good look, because chances are you won't see them coming to your table.

Not, that is, unless you're planning to have dessert first. 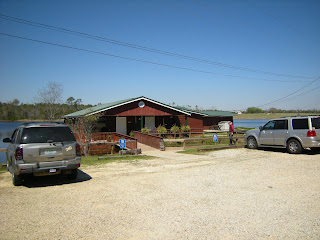 Skip's on 43 isn't something you'll see signs for 30 miles away. In fact, I've been hard pressed to find anyone from my neck of the woods who's ever been there. But I can't imagine why the heck not.

Well, maybe I can. It's a good distance from the well-traveled route, and 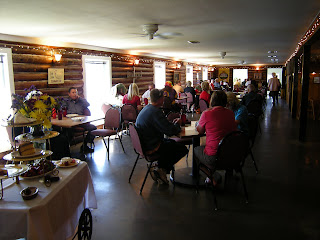 a completely accidental find on my part. My traveling companion and I were wanting a good lunch, something not from a restaurant chain. We'd rolled into Picayune, searching out Two Sisters Creole Kitchen, but alas it was closed. As was the Dockside Restaurant, Fat Boy's BBQ, and a host of other local eateries. Well, Panda Kitchen was open, but I hadn't come south on I-59 to smother myself in Chinese buffet.

We pulled in for gas at a Shell station and asked what was good to eat in the area. The poor girl at the counter looked a little bewildered when I told her Ryan's wouldn't do. She pointed in the direction of Kiln (which she pronounced as "Kill") and said if we were willing to go a bit down the road we were like to find something halfway decent.

We followed the signs for Bay St. Louis, reasoning if we didn't find something before then that we might just roll down the coast and head to New Orleans. We passed subdivisions and churches and a lot of rural scenery, and nothing. 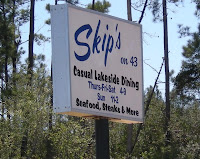 Until we came to a straight part in the road next to a small lake. And there, perched out on a dock, was Skip's on 43. At first, we both mistook it for a church, since there were so many cars in the parking lot. But the words "Casual Lakeside Dining" caught our interest, and we decided this was a good place to kick off the road dust. 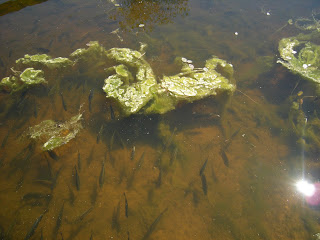 We crossed a small bridge to the restaurant, and noticed all the sunear, bream, and smallmouth bass eagerly awaiting a nibble. Inside the door, we found a fish feed machine, and a sign entreating customers not to feed the hand-sized fish with crackers and bread from the restaurant. Nice, homey touch.

Don't let that tablecloth draped dessert table fool you. This is casual dining, inviting and wonderful, with the aroma of too many good fish dinners recently prepared permeating the air.

The hostess came up and asked us if we'd like to sit in the back, where the water was, or near the front. She told us the back was noisy, so we went for a quieter spot in the main dining room.

We knew it'd be a good meal when we saw the posting above the table next to ours... proclaiming proudly, "It's all good." 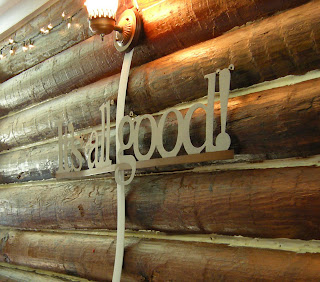 Skip's is a place where the waitresses still call you "sweetie," and local ministers sit down for an after-church dinner with their congregations. The couple at the next table had their small baby, in a carrier, perched on the table with them. One of the waitresses kept coming by and cooing at the young 'un. 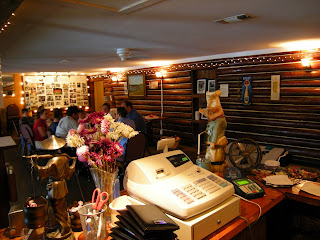 It took a few minutes for service to get to us, but that was okay. In restaurant talk, it was "slammin' and jammin'" and busy as all heck. We called for drinks and placed our orders, and our waitress bustled herself back over to the kitchen. 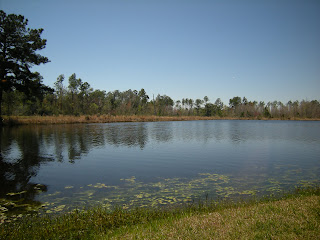 My traveling companion excused himself for a restroom break. I captured some shots here and there, including this great shot taken from the window by my chair, looking out over the lake. The day was beautiful, and the picture inviting. 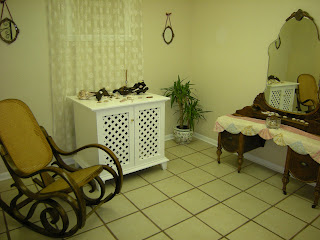 My companion came back and told me I must, certainly must, go check out the restrooms. I did, and I received a happy surprise. Not only were the facilities clean, they were also spacious. There's a lounge area in the outer room of the women's restroom, with rockers and seashells and lots of room. 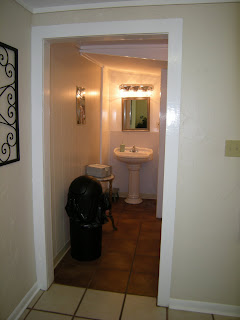 The inner chamber has two stalls, complete with a sign that tells you to pull rather than push to get in. After the tiny restrooms we'd found elsewhere, this was a real treat. 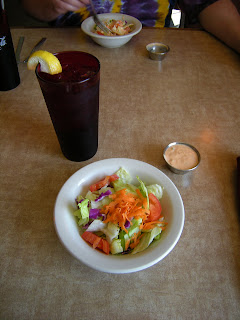 When I came back, our salads had arrived. As per usual, I ordered my side salad without onion. The side salad is a nice fresh mix of salad greens (mostly iceberg lettuce and a little purple cabbage), sliced tomatoes, and shaved carrot. Pretty decent. And the bowl was chilled, which is always a winner in my book.

But what came next was even more special... fresh, hot bread from the kitchen. I expected a sourdough from the scent -- but if this was sourdough, it was very mild. The 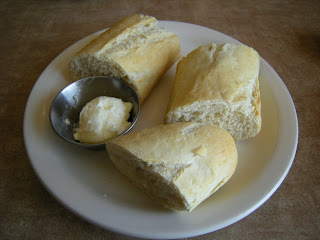 bread was just slightly chewy, and with the butter had the surprising taste of a top of the line saltine cracker. The salt came mostly from the bread... there was very little in the butter, but it worked quite well.

While the food was a little while getting to us, our waitress was attentive, and she kept checking back to see if we needed refilled drinks or more bread. 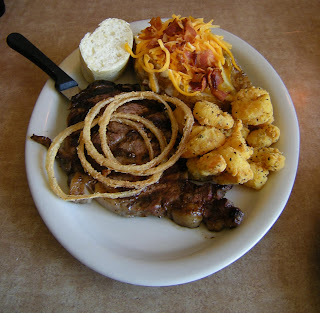 to make salivation necessary and uncontrollable. My traveling companion had ordered the Surf and Turf, an 8 ounce ribeye with a choice of seafood. His ribeye came out cooked perfectly medium rare, topped with a few slender hand-battered onion rings. His loaded potato was slathered in butter and sour cream, Cheddar cheese, and real bacon pieces. 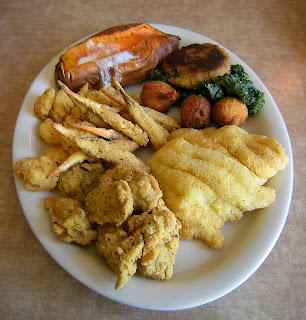 And mine? Well, I have to try a little bit of everything. I tried the Seafood Platter, with its wide selection of local fishy favorites. It came with two generous catfish filets, a crab cake, seven large shrimps (shrimps? or just shrimp? I can never guess the plural), seven large fried oysters, and seven crab fingers, along with a baked sweet potato and three sweet hush puppies. The fish was light and lacked the muddy taste you get with some less than fresh offerings at other restaurants. The shrimp was lightly

breaded with a little cornmeal, a lot of flour -- and was that buttermilk? The oysters were plump and tender, and the crab fingers came off their shell picks with ease. And that sweet potato? It's served with just butter, but boy was it soaked in it.

Of course, there were doggie boxes involved. There's no way normal folks like us could eat everything. So the dessert table went unsampled.

Such a repast is fit for a late dinner and early bed... for two travelers on a long road, it was a welcome 90 minute respite and then a halfway sleepy drive back into Picayune and down to our next destination, New Orleans. We actually found ourselves stopping in Slidell for Mochassippis (think Community Coffee's version of Starbuck's Frappucino) to keep going. And on arrival at our lodging of choice, we collapsed and slept the good sleep of those who have been well fed. 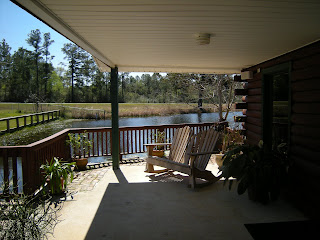 Skip's isn't a main-drag sort of place; you have to know where you're going to, to get there. But it's well worth the extra miles to experience some great seafood, a comfortable atmosphere -- and, oh yeah, some nice bathrooms, too. 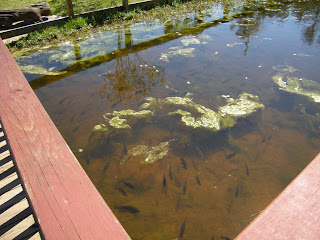 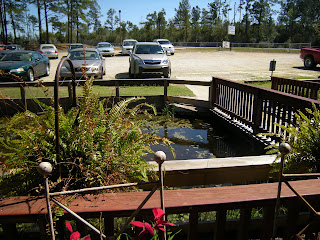