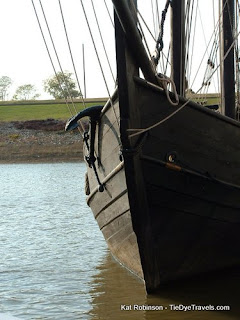 The Nina, the Pinta, and the Santa Maria all sailed the ocean blue in 1492 with Christopher Columbus, as we're all taught in elementary school.

Today, you too can board the Nina and marvel at the little ship that traversed an ocean to bring the explorer to the New World. 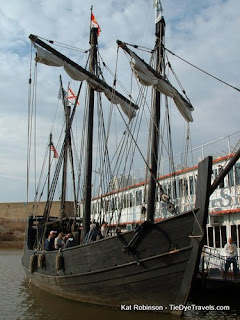 No, this isn't the Nina of yore... she's lost to the sands of history. But today's Nina is the next best thing. And she's right here in Arkansas.

The original Nina was a caravel, a small cargo vessel that formally bore the name Santa Clara. Nicknames for ships were common, so the ship was nicknamed Nina, which meant "the girl." She was supposedly Columbus' favorite ship. But it wasn't easy to acquire her. 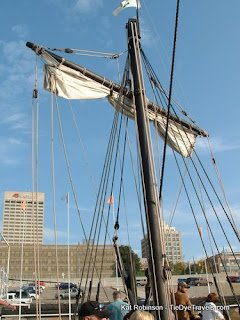 Nina and her two sister ships were the property of Spanish natives, but Ferdinand and Isabella demanded their turnover to Columbus for his voyage. After all, if you're going to make history, you have to get to where the history must be made, right?

And most of us know the story well, how Columbus and his men (some say 86, others 89) traversed the waters of the Atlantic and reached what we now know as the Bahamas.

What you might not realize is just how small the ships were.

We think today of enormous cruise liners and aircraft carriers. But docked early this November in Memphis, Nina was dwarfed by the riverboats along the landing.

This incarnation of Nina, by the way, is not the original. That ship was last known to have made a trading voyage in 1501. This little beauty was conceived of by John Patrick Sarsfield in 1988. He utilized the skills of master craftsmen in Brazil, and the little ship set sail in 1991. She was used in the filming of 1492 and has visited more than 300 ports of call. 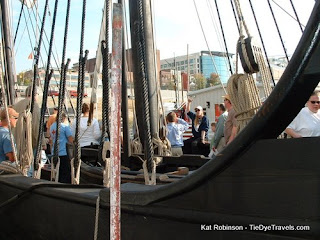 This summer and fall, she's been sailing less salty waters, most recently travelling the Mississippi River for tours. Now she's journeyed into Arkansas waters. She'll make port in Pine Bluff, North Little Rock, and Fort Smith this month, and be available for tours at the bargain rate of $5 a visitor. 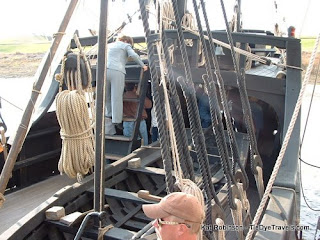 But Nina's real surprise is in her size and detail. This is a true ship, not some movie prop on a barge. She rests lightly in the water as visitors climb over her main deck, peering into the tiny vestibule that would have been a captain's only source of solitude. Children play in her bow, and adults read the tales of her construction and oggle the momentos of times past. 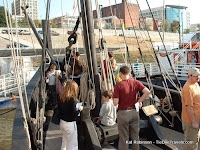 The crew of the Nina aren't along for the money. One of the gents who was on the ship the day I boarded mentioned that he'd been a history teacher and couldn't pass up the chance to share Nina's stories with others. 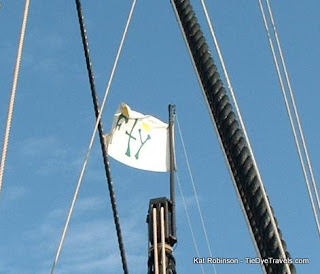 I listened as he answered question after question... such as "why does it say F and Y on the flag instead of CC" (that's because the journey of Columbus was financed with the royal coffers of Ferdinand and Isabella), "how did people play cribbage on a board nailed to the
wall?" (that's a Travers board, which marked the direction of the ship over each four hours, and let the navigator determine where the ship was in the ocean), and "why can't we climb that ladder to the top?" (because of liability issues). 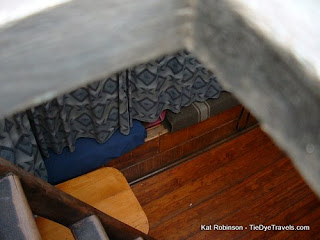 Because of those lessons we learned in school, lots of the visitors have a general idea of what the voyage must have been like. But few are prepared to believe that yes, there were almost 90 men between the three ships -- and few bunks. And can you imagine what the rocking of the waves would have been like? 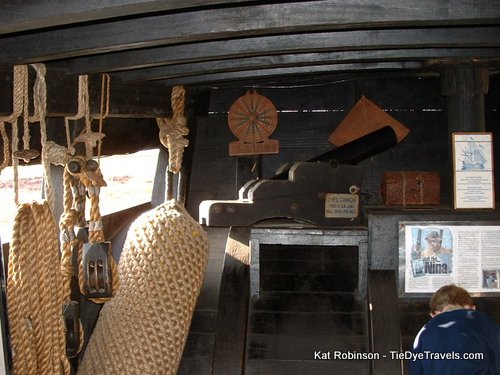 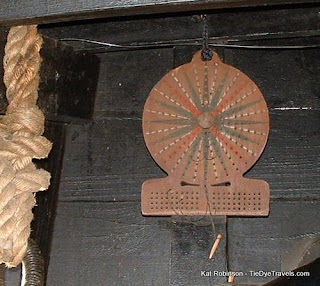 After this tour up the Arkansas River, Nina will be heading down to Baton Rouge and then out to sea. Her future lies in missions in the Gulf of Mexico, where she'll be chartered for day journeys for tourists. But right now, she's close at hand.
Set sail for the Nina while she's in the waters of our state, and experience a little piece of history.

You can find out more information by visiting the ship's website.

UPDATE 8/26/17: The Columbus Foundation has sent set to sail a second replica ship, The Pinta, and continues to sail them to cities all over the world. Learn more about the mission at TheNina.com. 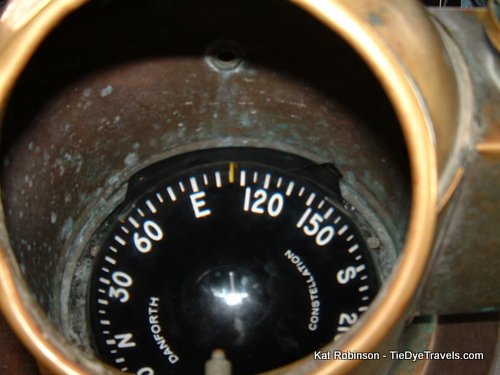 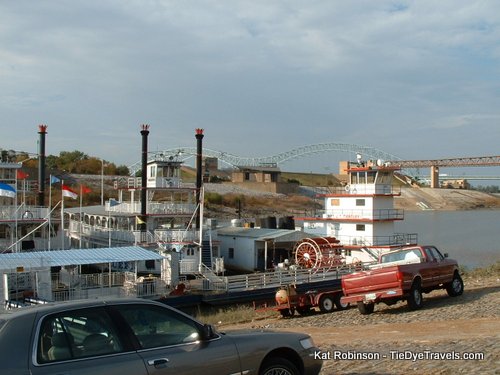 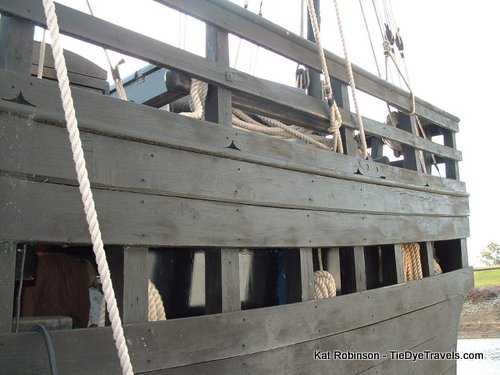 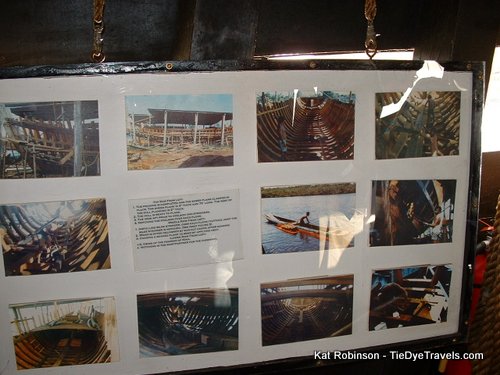 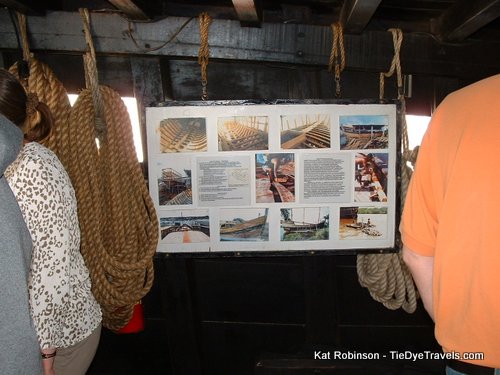 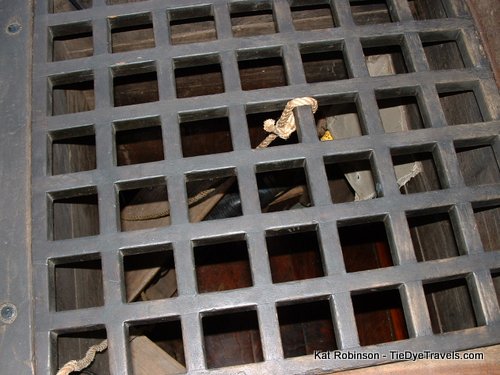 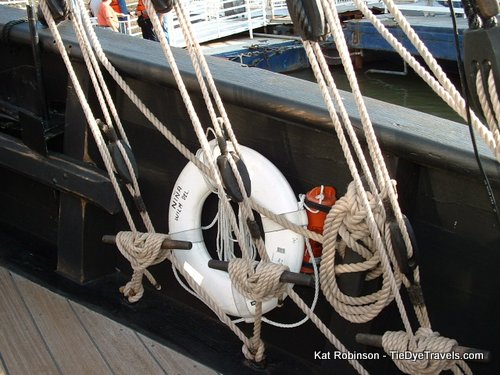 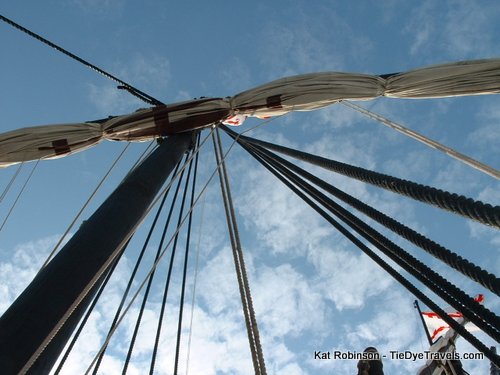 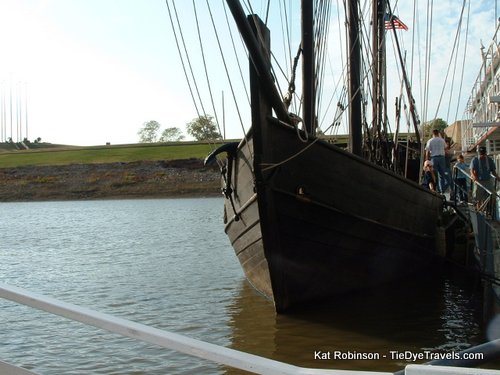 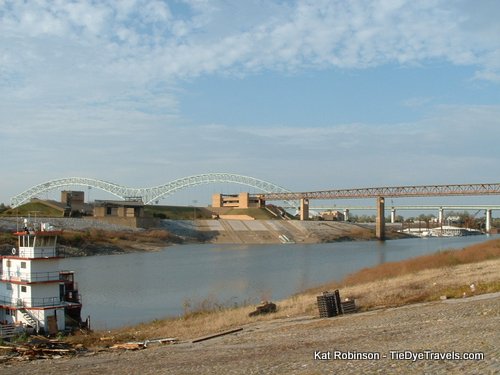