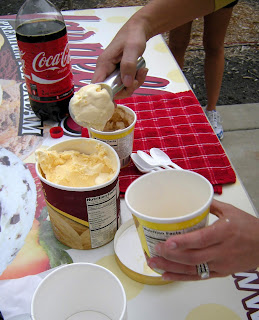 Summertime may really start the third week of June, but in Arkansas the real sign of summer is our state’s largest festival, Riverfest. And while many of the fun food items change from year to year, one thing’s always certain: you’re always going to find Yarnell’s ice cream.

The state’s only ice cream manufacturer has been rolling since 1932, when founder Ray Yarnell bought Dairyland and got things started in Searcy. 78 years and four generations later, Yarnell’s isn’t just the oldest manufacturer in Searcy, it’s still privately owned and an Arkansas tradition. And yummy, to boot.

I’m not sure I knew of any other ice cream company as a kid. I thought ice cream was just supposed to come in those gold-topped maroon tubs, unless you wanted to get some Crush soda and milk and make 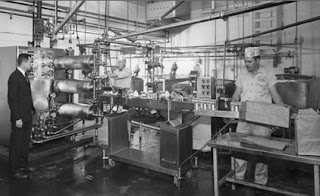 your own with an old hand-cranked ice cream maker at home. It was definitely an Arkansas thing, though… out of state relations would come in and stay with family and there’d be that carton, almost always Homemade Vanilla (which, as it turns out, is the most popular flavor to this day). 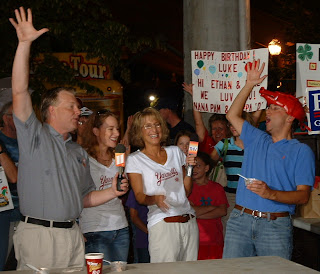 Even into adulthood, Yarnell’s always held a special place for me. And, obviously, for others as well. In my TV days they were always willing to come out and help a good cause like the Summer Cereal Drive. Yarnell’s folks would show up for just about anything. They helped me get a crowd of several hundred people together one morning, serving up ice cream at 4 a.m. and encouraging people to come out to meet Dave Price of the CBS Early Show… ah, what memories.

There are few manufacturers in this state that bring such pride. All sorts of places I go, I see Yarnell’s ice cream mentioned by name on menus, celebrated in stores and lauded at fairs and festivals. They’ve been a major sponsor for Riverfest for several years now. But what goes into that production?

I spent a good time begging for a chance to see ice cream being made, several phone calls and such. Finally I was granted a chance to visit the Searcy facility. Let me be clear: there’s no tour for the public. Read on and you’ll find out why. It’s a good reason, don’t worry.

I met with Dlorah deVore last week to see what goes on inside the plant. Right off the bat I had to take off all my jewelry and put up my hair. Yarnell’s follows strict standards. Nothing that can fall in is allowed. I was given a hairnet and a lab coat and we went in and scrubbed up. A foam on the floor sterilized our shoes; this foam is released at intervals to keep it renewed and to keep everything sanitized. It also has the added benefit of smelling nice. 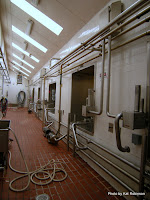 Our first stop was at the tank room. Each of these tanks holds milk or cream that will be used in the production of ice cream. Each week, the plant uses 16,000 gallons of milk, 10,000 gallons of cream and 8000 gallons of sugar. The milk comes here first (and to the outside storage tanks) before being pasteurized and sent along to be mixed as ice cream. 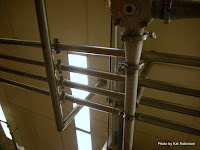 All through the plant overhead are pipes from these tanks, pipes that carry the milk and cream directly to each processing area for use in making the ice cream itself, in frozen dessert products and in ice cream treats. 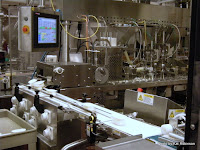 Dlorah showed me some of the assembly lines where frozen desserts were being assembled. Because of proprietary rules, I can’t tell you what was being made on the lines. But I was fascinated… not only by the speed at which these items were being assembled and by the apt and able hands guiding each product along the way, but by the machinery itself. These aren’t permanent lines. They’re assembled in sections depending on what needs to be made. It’s 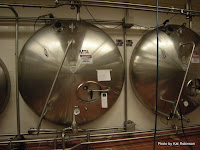 conceivable that a different setup could be used for each and every item. Really kinda cool, if you ask me.

We also viewed some of the ice cream holding tanks. These big tanks hold the mixture of milk, cream and sugar just before and during the processing of each certain product. In-between they’re scrubbed out and sterilized. Not only does that keep your Fudge Bars from tasting like 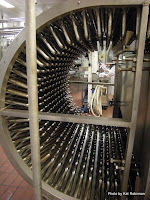 your Fruit Bars, it means that everything’s done as meticulously and cleanly as possible. Depending on the run of a product, these tanks might get thoroughly cleaned out a couple times a day.

We walked through a couple of other areas and looked at equipment and another processing line. The gigantic drum that holds ice cream novelties as it goes around is huge. It has indentations for each treat within. Since it’s not being used right now, it’s been cleaned and set to the side. I also saw one of the big machines that catches the 1.5 quart tubs I’m used to seeing in refrigerated cases at the store. Very novel. 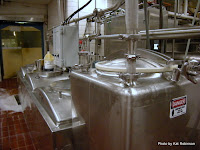 I also saw some of the giant tanks where different flavors of ice cream are mixed. It’s hard to comprehend just how much ice cream is made in this plant.

We passed through to another room, where pints of Cookies and Cream ice cream were quickly spinning through a short maze in front of us. Here’s where things get really busy. On the upper end of the room, you can see the product as it all comes together, with cookies in a hopper and the milk and cream and sugar all coming in via their own pipelines. 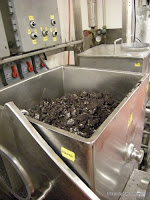 The cookies are ground to the proper consistency and mixed in with the other ingredients and forced into another pipe, which carries the mixture overhead to another machine. 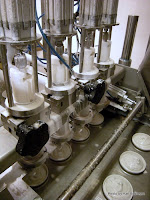 The cups are placed in tubes for dispersal right there at the next machine over. In sets of four the cups are dropped into waiting round slots. They’re advanced forward to a machine that deposits just the right amount of Cookies and Cream ice cream into them. 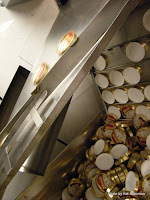 On the other side of the room, batches of pint lids are sorted by a special machine that flips them the appropriate direction with the help of a shaker and gravity, then shoots them over to the ice cream filler, which plops the lids perfectly down onto the pint containers.

The pints are then sent scooting along a conveyor belt to waiting assistants that hand pack them into boxes and flats before those boxes and flats are sent into the freezer.

We didn’t go into the freezer… we certainly weren’t garbed out for freezer time. The VRT (Variable Retention Time) freezer instantly sweeps the ice cream up and away and freezes it at 90 degrees below zero, Fahrenheit. It’s kept there for a bit and then stored in the storage freezer at -30 degrees. The storage freezer can hold up to a million packages of ice cream at any one time. 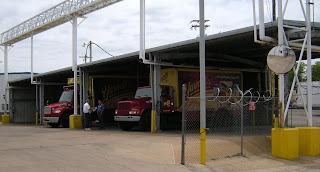 Our tour of the inside complete, Dlorah took me outside to see the rest of the plant. She pointed out the fleet of Yarnell’s trucks; unlike other ice cream companies, Yarnell’s does all of its own distribution. So you know if you get Yarnell’s where you’re at that it’s been in a Yarnell’s truck. I like that thought -- less people in the middle of the cycle there, fewer chances for thawing and such.

The fleet thing -- that’s been something that’s been around since the very beginning. Back when the company was founded Ray Yarnell, his wife Hallie and their nine year old son Albert were three of the plant’s 13 employees. There were just four refrigerated trucks then, and they ran to Cabot and Heber Springs and Walnut Ridge. There’s a very complete history on the company’s website; I urge you to check it out. 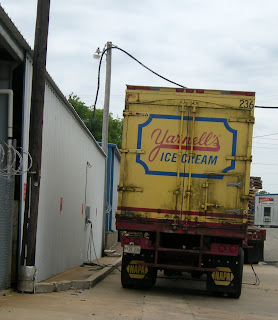 I noticed there was a large trailer hooked up to the electrical on the far side of the fleet lot. Dlora told me it was full of ice cream. That makes sense. Riverfest is the biggest holiday of the year for Yarnell’s. More ice cream will be sold there than at any separate event this year. It’s all being kept refrigerated and ready to go.

The people that work the booths at Riverfest are almost all volunteers from local churches. They’ll earn money from the sales that will go for projects and the like. 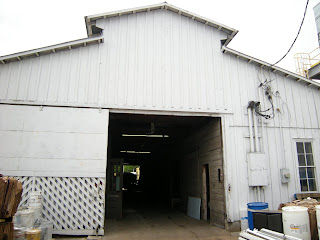 We passed by where the milk trucks were making their deliveries and walked around the building further. We passed what folks there call “The Barn,” a structure that’s been there since the 40s that’s still used for storage today. It was neat, seeing this perfectly kept little barn in the middle of all this recently built stuff.

And then we passed by the big tanks from the outside with their loads of milk, sugar, cream and corn syrup. 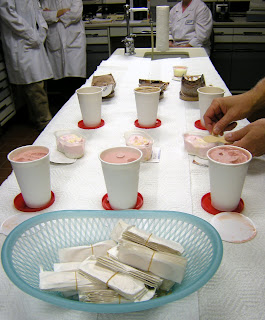 Back inside, we went to the daily tasting. Each day ice cream produced the previous day is tested -- with samples pulled from the beginning, middle and end of each run. They’re sampled by members of the tasting team in a special upstairs laboratory. This is also where new flavors are sampled. But it’s not just a few select people that get to try the ice cream. Anyone who works at the plant can come upstairs and have their fill. 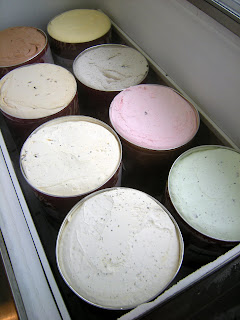 I felt a lot smarter about ice cream when I left, and I’m looking forward to the summer season. 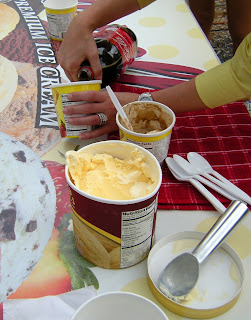 I know that tomorrow morning Christina Yarnell, the company CEO representing the fourth generation of her family with the company, will be back on TV. I caught her talking with Barry Brandt last year as I was walking through the Riverfest set-up, as she shared Coke floats and the new Sunny Berry flavor. 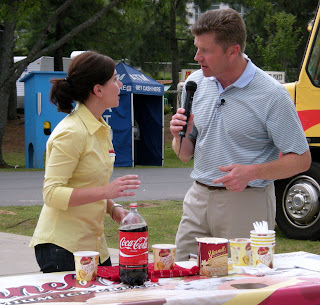 This year the new flavors are Fried Ice Cream (a Riverfest special) and Lemon Ice Box Pie. I’ll certainly look for one of the nine stands out there… I’m partial to Ozark Black Walnut, myself.
If you’re interested in sampling some of the many flavors (there’s about 20 of them) or some of their ice cream novelties (did you know the Yarnell’s Ice Cream Sandwich is the most popular ice cream novelty in Arkansas? No? You do now), you can find them in just about any Arkansas grocery store. Yarnell’s is also distributed across Tennessee, Mississippi, as well as parts of Texas, Missouri, Alabama and Louisiana. You can find out more by checking out the company website.

UPDATE: On June 30th, 2011, Yarnell's informed its employees that it was ceasing operations. After 79 years as part of the Arkansas experience, it will be missed.

UPDATE:  December 1, 2011 -- Searcy Chamber of Commerce president Buck Layne tells me Shulze and Birch Biscuit Co. has purchased the plant and most of the recipes and plans to reopen the facility.  Huzzah!
Told by Kat Robinson at 1:43:00 PM