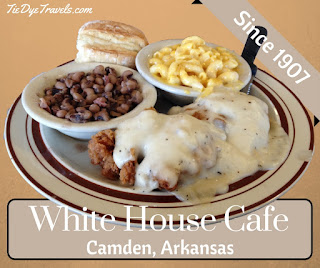 Ever wondered what restaurant could solidly claim the title of oldest restaurant in Arkansas? Here's your amswer. Let's talk about the Camden mainstay that's spent generations serving travelers and locals in southwest Arkansas.

110 years. That's the answer you're seeking. That's right - as of this writing, the White House Cafe in Camden has been operating for a century and a decade. 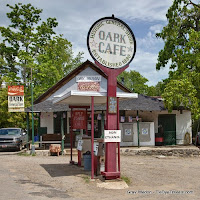 There are a few operations that have gone longer that do have food as an element these days. For instance, the Oark General Store, which has been in operation since 1890. The restaurant within, though, only dates back about 20 years.

Then there's the Ohio Club in Hot Springs. It opened in 1905, but food was not served alongside drinks, entertainment and gaming until the 1930s. 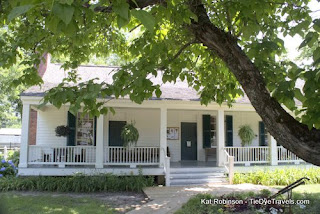 The oldest restaurant building in the state, the Hinderliter Inn, stands on the property at the Historic Arkansas Museum in Little Rock. The second oldest we still know about is William's Tavern, originally opened in the 1830s but long closed when the Arkansas Department of Parks and Tourism relocated the building to Historic Washington State Park and opened it back in 1986.

Other restaurants claim their heritage loudly. Not the White House Cafe. It's unusually shaped, two-story, expanded from its original space, has a balcony, a spiral staircase, years of neon and memorabilia, and the most unusual bar I know of in Arkansas. But it's quiet about its origins. 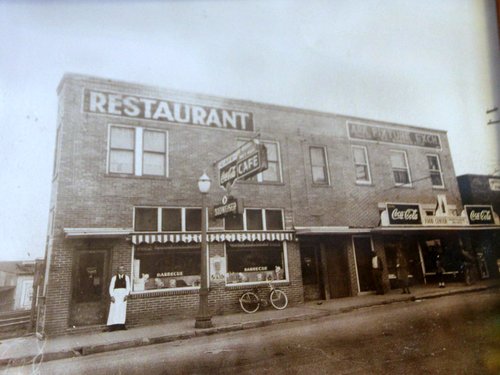 The White House Café was opened in 1907 in downtown Camden by Hristos Hodjopulas, who had moved to southern Arkansas from Greece. The wedge-shaped edifice was built right next to the train tracks, a two story chunk at the end of the downtown district.  The big red brick building was literally at the hub of life in Camden at the time, within spitting distance of the hill where the courthouse stood and eyesight of the depot, mere yards from the Ouachita River. It shared space in the building with a grocery store. 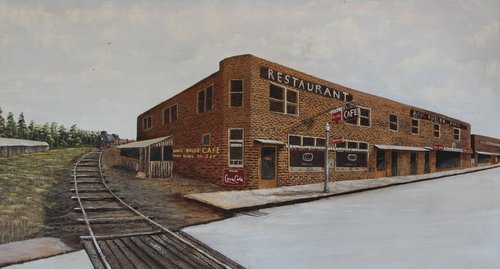 Shortly thereafter, Hodjopulas sold the place to his cousin James Andritsos, who kept the place open 24 hours a day, seven days a week, serving the customers that were coming through by automobile and by train. The restaurant's location on Adams Street served as a beacon to overnight drivers who would see the light at the curve coming into town from the south. When the first Arkansas highway map came out in 1916, the routes running through Camden all converged near where the restaurant sat. And when Arkansas Highways were numbered in 1924, it found itself along the A-5 artery. Two years later, that portion of road would become a section of Arkansas Highway Seven, the state's longest numbered highway. 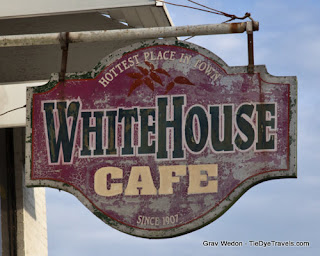 The White House Cafe became well-known as a stopping-over place where customers could be found at the custom-welded all-steel bar at all hours of the day and night. The original menu featured Kansas City-style steaks cooked on a hot griddle, turned quick for travelers.

During World War II, the White House and its proximity to the tracks lead to it being a popular spot for soldiers being moved by train – who could quickly grab a hot meal before having to reboard for other destinations. 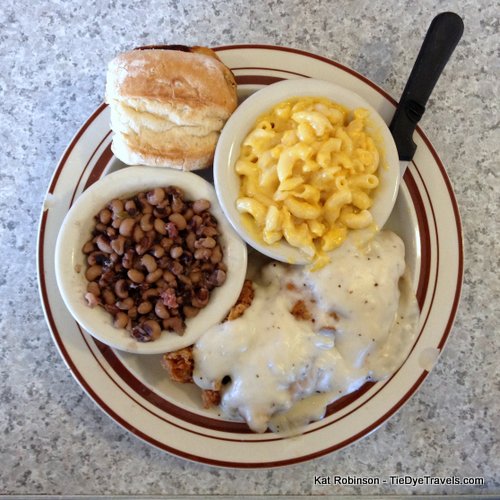 After the war, Andritsos sold the White House to a couple from China, Lum and Josephine Ying. While the restaurant was by this point no longer a 24 hour affair, it did serve breakfast, lunch and dinner. The Yings added chicken fried steak, meatloaf and hamburgers to the menu. 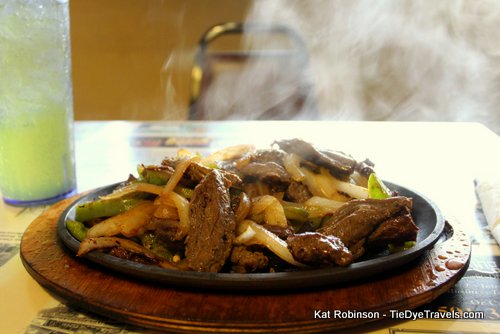 Ted Bradshaw bought the White House in 1981, and his daughter Caroline added Tex-Mex food such as nachos, enchiladas and fajitas to the offerings – without taking away the dishes the restaurant had come to be known for. Bradshaw turned around and sold the restaurant to Bill and Mary Bethea the next year. They renovated the old living area upstairs and brought the café’s steaks back to prominence. 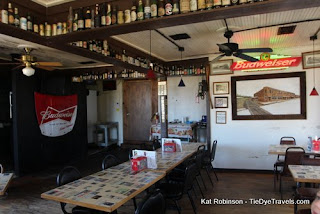 Over the years the White House changed hands several times. In 2000, Tommy Vaughan and Teresa Lampkin purchased it along with a business next door, which they renovated to expand seating capacity for the place, and to add another staircase. The upstairs is now a lounge where 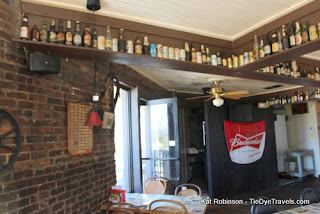 customers can smoke or drink, play pool or watch sports.

Today, the White House Café still stands, a whitewashed wedge spread across half a block on the east side of Adams Avenue, southeast of downtown. From its upper deck in back, you 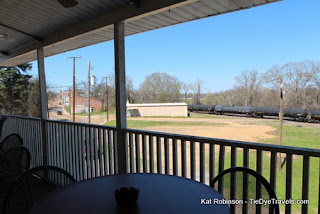 can look out over the tracks - now located a few blocks away, and see the Ouachita River beyond. Within, the walls are decked with a century’s worth of memorabilia and newspaper clippings. Neon signs hang in the windows, and that great steel bar still spans the front room. 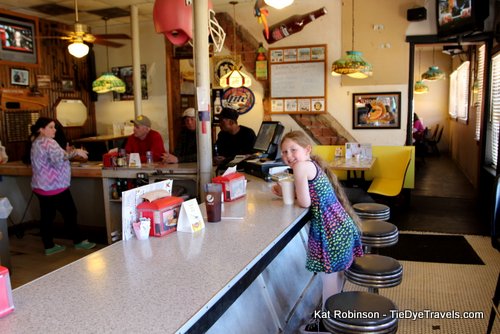 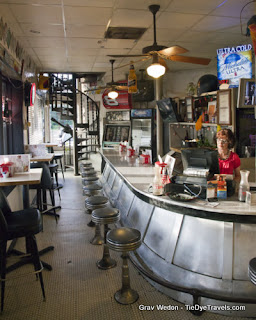 Lunchtime comes with its own pleasantness, plate lunch specials that feature many of those old historical offerings – roast beef, chicken and dumplings, chicken fried steak, meatloaf, smothered pork chops and of course fish on Fridays. The side dishes listed each day could come from any Lower Arkansas home – “candy” yams, fried potatoes, cabbage (sautéed in a pan), turnip greens, pinto beans, squash, PurpleHull peas or buttered corn or whatever happens to be available that day. A slice of Texas toast or a johnnycake comes along with the plate, and there’s usually a dessert – a slice of icebox pie, a scoop of cobbler or a chunk of pound cake – to choose for dessert.

The steaks are still ample, and the Tex-Mex fare is spot on, with some of the best fajitas to be found on this side of the Red River. They come to the table sizzling with an array of sides -  tortillas, guacamole, lettuce and tomato and sour cream, rice and beans, enough to share for two. The White House Café even offers two different sorts of cheese dip – its popular white, and a yellow version. 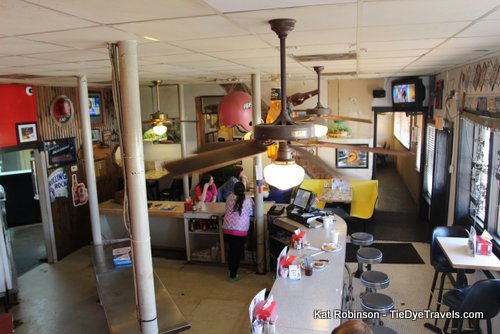 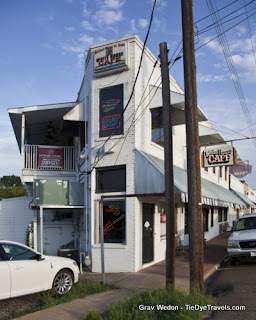 I never have been able to get a straight answer about the bar, though. It's unusual - a heavy, welded-together metal mass that occupies the original front room of the place. A counter sits atop the slanted edifice, and a metal footrail runs all along it. When I've asked, I'm just told it's always been there, and I accept that. After all, none of the original owners, staff or patrons are still around to chat with me about it. If you have more information, please share it. 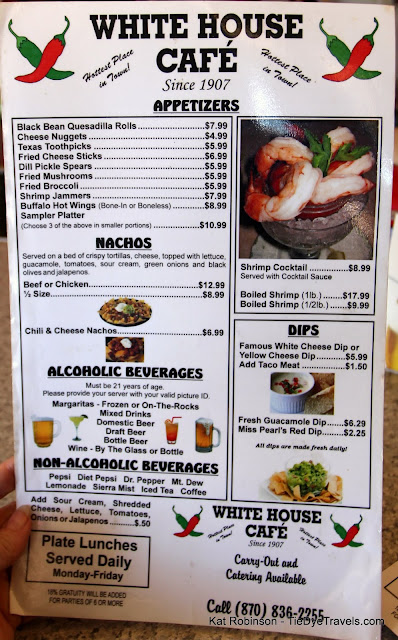 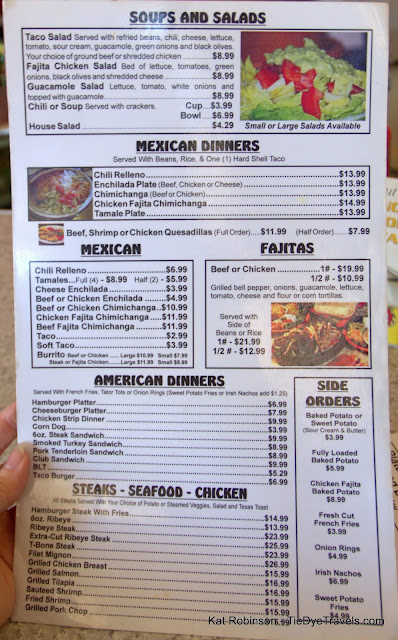