That Night I Drank The Best Tequila At Cantina Laredo With My Friend Leif And Remembered It All. 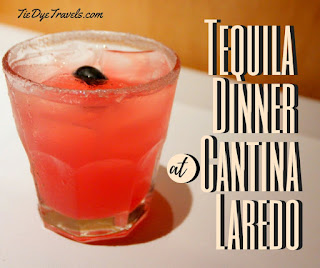 I am not a tequila drinker. Honestly, I usually avoid tequila because so many of the off-brands give me heartburn something fierce. But on an invite, I went to Cantina Laredo in Little Rock's Midtown District and found that yes, I could rather enjoy the popular beverage, especially when conjured into gorgeous beverages and served alongside a rather brilliant menu at a special dinner. So... want to see what happened?

My friend Denver contacted me a short time back and asked me if I'd ever partaken in the quarterly Tequila Dinners at Cantina Laredo. I had to be absolutely honest and say no, I had not. 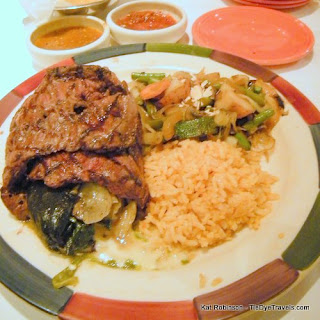 Don't get me wrong - I liked Cantina Laredo. In particular, I love the Camaron Poblano Asada - which is, in short, a shrimp and cheese stuffed pepper wrapped in a steak. I've been back some on and off over the years from that first venture in March 2009, and the food is always spot-on.

But tequila. Hm. I pretty much gave up on tequila years ago, after too many evenings at parties where
drinks were mixed and the raging fires of hell scorched my esophagus later as I slept. There is actually a story, not for this particular site, of a particular night where my aversion to cheap tequila probably saved me from the nasty, ridiculous hangovers my friends endured during a Ladies Night at what's now Deep (under Willy D's) - but not enough people have moved on for me to share that story. But I digress.

Denver's query lead to an invitation from Chris Lane, the general manager at Cantina Laredo, who invited me and a companion to attend a Tequila Dinner. Well, I was willing to try it. So my friend Leif and I went Tuesday night.

Now, I should mention, maybe it's the point of life we're at or we're just unusual, but I don't drink hardly at all. Usually when I drink, it's because I'm writing about the experience. Grav rarely drinks because of liver damage he sustained in his car wreck a few years back. Leif doesn't drink much either. It was going to be interesting. 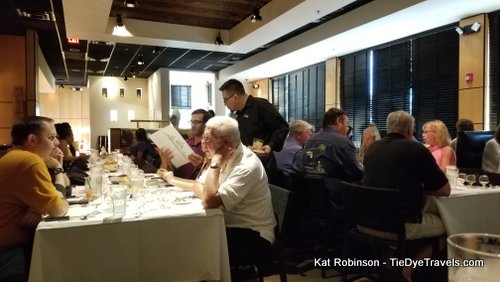 This particular evening, the tequilas in question were created by Herradura. a 100 percent Agave series of tequilas. For the record, I have no particular endorsement of Herradura - they did not pay me to comment, it's just part of this story. 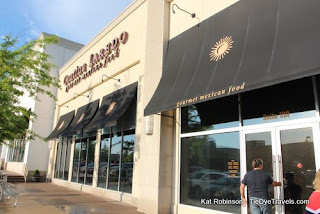 When we arrived, we were taken to our booth where three glasses were set out for each of us. One of them contained a clear tequila - Herradura Silver - which was very clean and had a slight oaky scent to it. The second was the Herradura Reposado - a barrel-aged tequila. The third was the 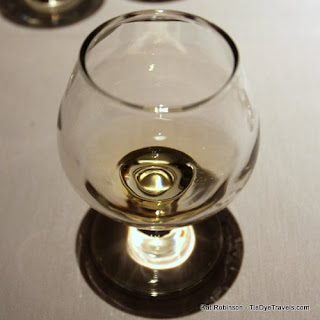 Herradura Anejo, which had a sweeter body to me. All three were provided at the start of the dinner.

Each of the four courses of the meal itself were accompanied by beverages created with Herradura tequilas. As Leif and I noticed the room filling with other attendees, we saw a packed crowd of individuals from all over the spectrum - young and old, well off and just making it, all a bunch of 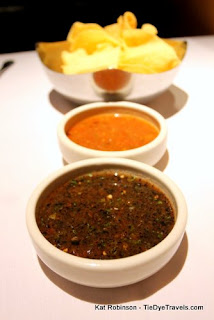 tequila lovers. That was pretty neat.

The three tequilas were accompanied by Cantina Laredo's thin yellow chips and two salsas. The first was a smoky, peppery roasted tomato salsa made with crushed androasted tomatoes, diced jalapeño peppers and spices. The second was a tomatilla salsa with roasted tomatoes, tomatillos, jalapenos, onions, cilantro and other spices.

After a brief chat with Chris Lane, our beverage for the first course arrived - a bright ruddy orange drink with a chunk of pineapple. This was the La Flor de Pina, or pineapple flower, which is also the name of a famous dance in the Oaxaca region of Mexico. It employed the use of Herradura Silver tequila. It was quite fruity and pleasant. 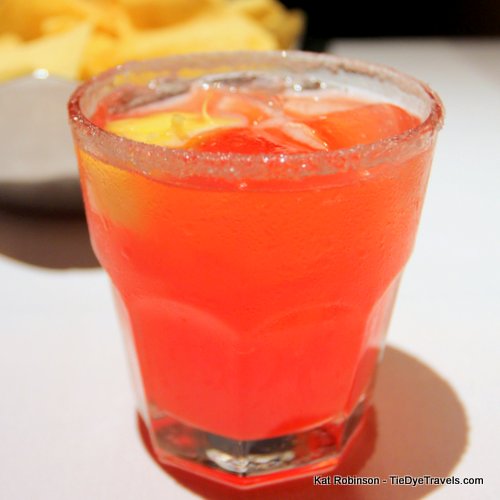 The beverage was quickly followed by the first course, a slice of avocado that had been breaded and deep fried and served with a pickled vegetable slaw.  I was pleased the dish was served quickly and the avocado was still hot. 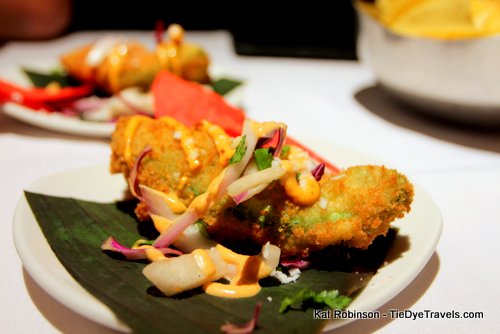 The combination was light and not too filling. Leif went to say to hello to our friend Donna at the next table, and we shared some quick notes while I Instagrammed what we were having. Our orders for the entrees were taken, and there was conversation.

It wasn't long before the next combination came to table. 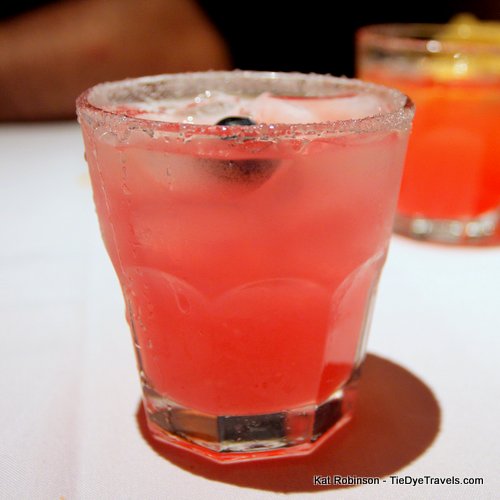 This one right here... looks so sweet and simple. Nope  This one's certainly remarkable. Chris mentioned it was his favorite, and I can see why. It's blueberries and jalapeno peppers, muddle together with Herradura Silver, served over the rocks. It's a fuego. And wow. The sweet and salty rim just enhanced the initial nectarous wave that came over the tongue. Then it kicked me in the back in the throat like a mule in spurs. Hot holy bam, that was a spiky drink. 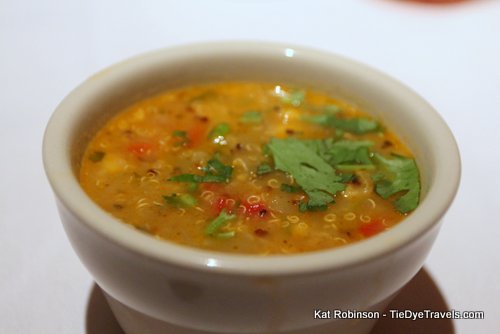 The counterpoint was this remarkable quinoa and vegetable soup. I'd be happy with a mixing bowl of this for dinner and nothing else. Tomatoes, potatoes, onions, cilantro, cumin, nice whole roasted pepper notes and such... it was almost buttery at times. It extinguished the flames of jalapeno from the fuego again and again - a yinyang of throat-slicing sweet followed by a spoonful of thick, hearty savory that eliminated every note of pain but left the delicious heat. I would never imagine pairing these two items but here it worked.

Leif and I split on dinner itself, Right before our entrees came out, we were given this honey-lemon delight. 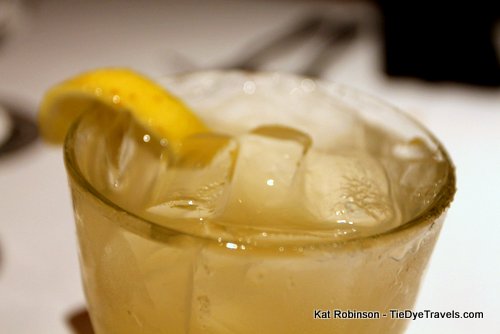 Lusciously cloying, the notes of Barenjager paired with Herradura Reposado and lemon were like a honeyed smile - an anti-lemonade that spoke wetly of August kisses in the humidity.

Um, yeah, so I digress. Out came our entrees. 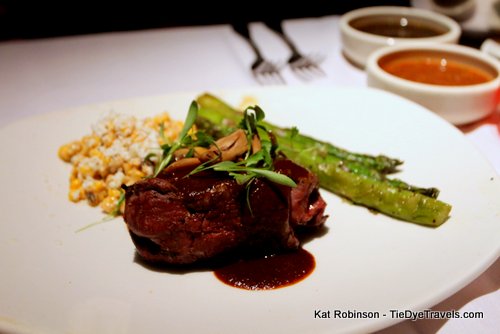 Leif chose the filete with Coca-Cola mole. Okay. What? Yes, Coca-Cola mole sauce. A good mole has lots of notes, and this one's strong suit was its sweeter elements, the bite of cola against a chocolate base with plenty of dark aged and dried peppers and what have you. The steak itself was fork-tender, satisfying.

And then there was that corn. Dadgum that's some good corn. It's a roasted corn that's added to a cream base and it is so. damned. good. 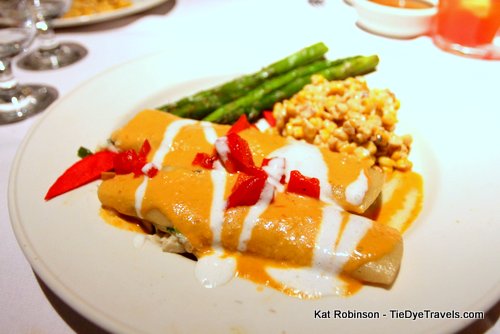 Leif's steak was good, but my plate of Crab Poblano Enchiladas is my new favorite thing, hands down. The claw and lump crabmeat inside was slightly sweet against the marvelously substantial and piquant chunks of poblano pepper. The arbol pepper cream sauce and the equally delicate sour cream sauce were drinkable - slightly peppery, full bodied, yet creamy smooth. The enchiladas, the asparagus, the corn.... 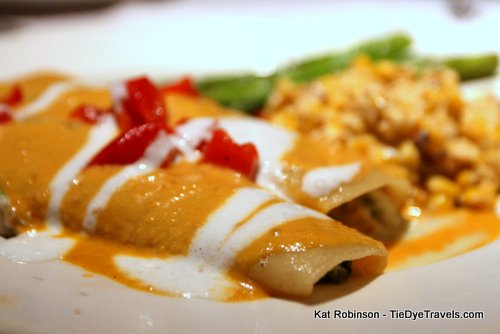 As I write this I feel the need to enjoy this dish again. Right now.

The food was excellent. Chef came out and talked with us about the corn. The crowd was getting a little loud but folks seemed to be having plenty of fun. 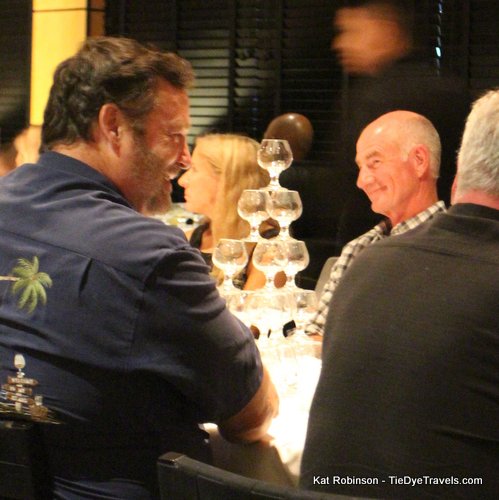 Cup stacking was happening at a nearby table with humorous results. There were a couple of times the empty glasses fell but no breakage, fortunately.

I was already getting sated, and Leif was still rhapsodizing on the steak, when dessert came to table. 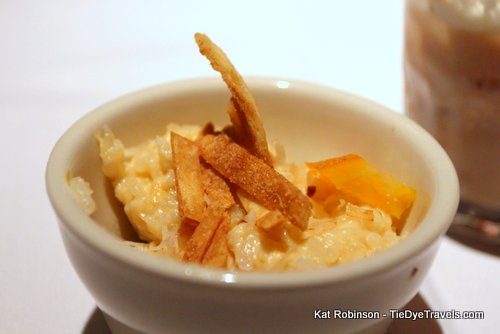 Rice pudding is not Leif's thing, and it seemed a little downhome for such a dinner, but it was actually exactly what I needed - a coconut-based rice pudding with orange zest. The rice calmed the roll of booze that was starting to form in me. I was tipsy and I knew I was going to need some time before I would be legal to leave for the evening.

Of course, this didn't help. 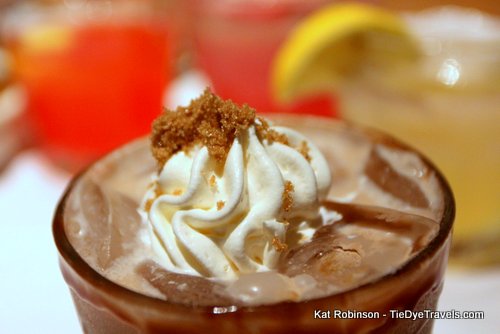 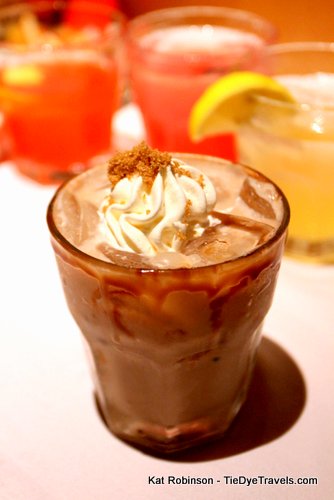 Oh bugger.  This was a chocolatey beverage built on Herradura Adejo, Kaluha, Bailey's Irish Cream, more cream and brown sugar with a chocolate syrup rim. It was like Mexican hot chocolate and it did not taste alcoholic AT ALL.
This is the sort of beverage I'd get if I were going to have an alcoholic dessert. It was potent but light and remarkably drinkable - though the chocolate syrup rim did lead me to needing to wash off the sticky. I'm glad I wasn't wearing a white top.

It made leaving very hard.  I probably hurt myself consuming rice pudding because I felt I needed to give this beverage its just due. 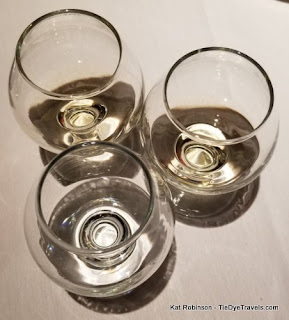 The entire dinner spanned about two hours, and there were Ubers available for the ride home. I learned a lot about the night. For one, I found there's a tequila out there that does not give me heartburn - hooray! For two, I discovered some really neat dishes I hadn't considered before at Cantina Laredo. And for three, I now have a significant need to return to this place and enjoy more of its cuisine.
Little Rock's Cantina Laredo is located in the Midtown district across from CHI St. Vincents and Park Plaza, at the northwest corner of Markham and University. It shares a shopping center with Big Orange, Pei Wei and The Container Store, amongst other businesses. Find out more by checking out the restaurant's website.

And keep an eye on this page for upcoming tequila dinners and the like.