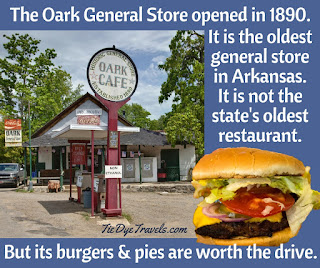 But that doesn't mean the restaurant that operates inside it deserves to be missed. In fact, Oark General Store's burgers and pies are not to be missed.

Misinformation is a killer. And when ome website runs with an idea and blows it up, some folks take it as a statement of fact. 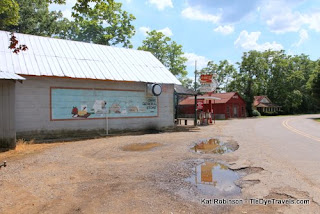 Such is a shame for the Oark General Store in Oark, Arkansas - which keeps getting named the oldest restaurant in Arkansas. It's not. The general store opened in 1890 but it wasn't a restaurant. The Eisele's, who run the place, even acknowledge that the joint's only served food for about 20 years.

Here, to clear up the question, is an excerpt from Classic Eateries of the Ozarks and Arkansas River Valley, published in November 2013. I hope this helps fix the misconception.

The Oark General Store is, as far as anyone knows, the oldest and longest continuously operating general store in the state of Arkansas. But that doesn’t make it the oldest continuously operating restaurant in the state. I’ve had folks tell me this, but now that I have the scoop, I want to set the record straight. You may remember my hearty recommendation for pie at the store in Arkansas Pie: A Delicious Slice of the Natural State. What we didn’t talk about there was the state of affairs the place
has been in of late or where the pie comes from. It’s tricky.

See, the little general store was opened up back in 1890, a hub for a community cut off from a good portion of the rest of the world. Its location, not far from the Mulberry River atop a plateau in the Ozark National Forest, meant it was very isolated, and even today, there’s no cellphone signal
anywhere near town. 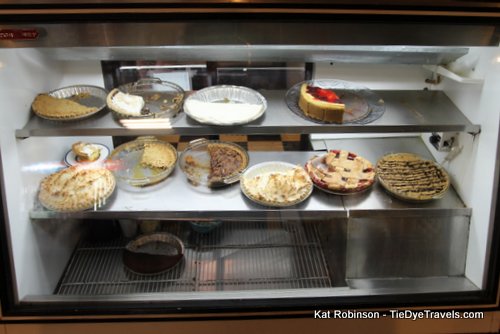 It did, however, have the corner on the market in the tiny little burg. Residents came down to the store any time of year to pick up seeds, sundries and groceries and for some good-natured gabbing, too. In the summer, the local kids came by to spend a nickel on candy; in the winter, the old men of
the area huddled up around a potbellied stove in the middle of the place and told stories of warmer times. 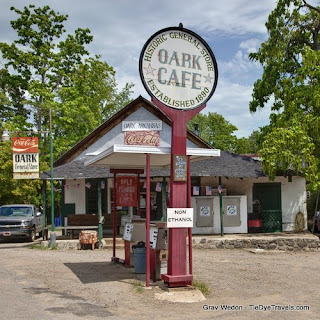 See, the Oark General Store has changed hands multiple times over the years. But because it’s in such an isolated place, it’s needed to stay open, so it’s never closed down. The community has seen to that.

The current owners, though, aren’t what you’d expect. In 2012, Brian and Reagan Eisele came to Oark to stay. The couple’s story began not in Arkansas—or in Washington, D.C., where both of them worked—but in the breakaway former Soviet republic of Azerbaijan. Reagan Highfill worked for then congressman John Boozman of Rogers. Brian Eisele worked for Congressman Joe Wilson of South Carolina. The two were part of a staff group touring oil fields and learning about the latest emerging ideas in the energy industry overseas when they met and fell in love in February 2010.

Reagan is from around here—Hartman, to be exact—and she graduated from Tech in 2006. Brian graduated from the University of South Carolina in 2005. They came back here in April 2012 to marry at Boxley Valley. While down here preparing for the wedding, Reagan saw a notice in the
newspaper announcing the Oark General Store was for sale. She mentioned it to Brian, and three weeks after they took the matrimonial plunge, they took another one—into store ownership. 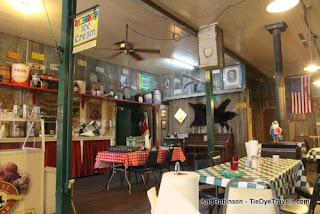 It has not been easy, but it has been interesting. And they happened to step in at a time when the restaurant has been gaining popularity on several fronts. It’s a fuel and food stop for campers heading further back into the Ozark wilds, a chance to prepare for a Mulberry River float, a mid-drive lunch stop for motorcyclists and a destination for food lovers looking for pie.

The Eiseles have experienced a lot of unusual events. They were pretty much unprepared for their first experience of Bikes, Blues and BBQ, a five-day festival that brings an estimated 400,000 motorcycle enthusiasts to Fayetteville and the rest of northwest Arkansas. They reportedly went
through five hundred burgers in a single day during that event. They’ve hired back some of the employees who worked under former management at the store. They’ve brought in satellite TV and created a Wi-Fi hotspot, the only one within a twenty-mile radius and a blessing in an area where cellphone service is nonexistent. And they’ve learned how to make pie—no, really, before taking on the store, neither Brian nor Reagan had any substantial restaurant experience, and they’re learning as they go along. 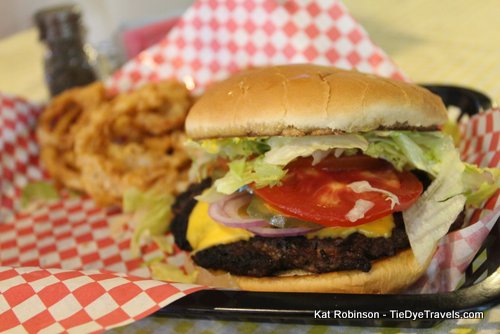 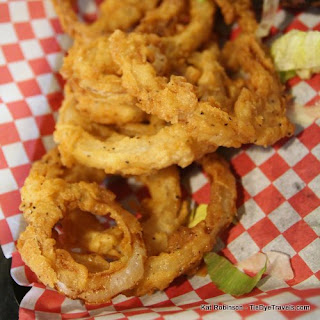 They’ve learned well, though. On my most recent visit, I stopped in for a burger and onion rings. I asked if the onion rings were homemade and was asked if I’d like them to be. When I responded in the affirmative, the cook got about making onion rings from scratch. And talking with Brian before I hit the road, I was suckered into a slice of pie (not that I needed much convincing), a slice of oatmeal pie I ended up consuming while talking with him about how the place was shaping up. 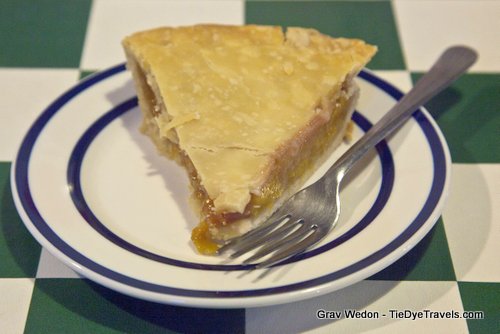 It’s all come together. The fantastic burgers from past incarnations are still there, great pies of half a dozen varieties are always in the case and there’s always a conversation going on within the walls, just like with those gentlemen of old who came to warm themselves around the stove with gossip and coffee.

The Eiseles have been good enough to share one of their recipes with me especially for this book.

In mixing bowl, cut shortening into flour. Add buttermilk and mix thoroughly until dough reaches  desired consistency. If dough is too sticky to work, add more flour, a little at a time. If dough is
too dry, add buttermilk until consistency is correct.

Grease a baking pan and then lightly coat the top of dough with flour—this will help keep your hands from sticking to the dough. Use your hands to softly compact the flour into dough.

With a utensil roughly the size of a standard wooden spoon, scoop out a ball of dough and work gently with your hands to smooth it out. Place balls of dough onto greased pan until dough is gone.

When biscuits are desired color and size, take out of oven and spread butter over tops one more time. The biscuits should soak in the butter at this point.

In an iron skillet, heat bacon grease to medium-high on stovetop. Mix in salt and pepper with grease. When grease gets hot enough to make the flour sizzle, add in all-purpose flour while stirring constantly, eliminating clumps. Roux needs to reach a creamy consistency. If roux is too runny, add more flour a little at a time. If roux is too dry, add more bacon grease in same fashion. It’s important to keep an eye on the flour, as it browns quickly. Use your nose to determine when the browning starts (we think it smells like popcorn), and mix in your milk once the flour is good and browned.

Remember to stir constantly. Turn heat down to a high simmer and reduce your gravy to desired consistency. You can always add more milk later to thin the gravy, if needed.

So there you go. Head up to the Oark General Store if you'd like to take a great ride that ends with pie. Or if you'd like to have a place to dine at while you're exploring this great secluded section of the Ozarks. 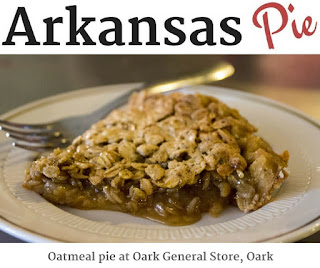