I Had A Dream... The Inaugural Class of the Arkansas Food Hall of Fame.

Several Arkansas restaurants and food professionals received a brand new top accolade in their field last night. Let me tell you about the Arkansas Food Hall of Fame and its inaugural class. 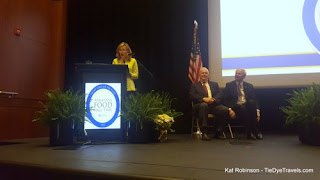 Last night, hundreds of food lovers, restaurant owners, chefs and innovators gathered at Ron Robinson Auditorium in the River Market for the very first Arkansas Food Hall of Fame induction ceremony.  There were, of 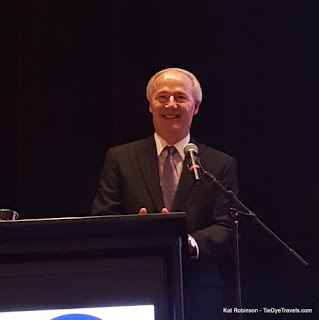 course, edibles before the show. And then we all gathered within the double-storied theater, heard great words from Governor Asa Hutchinson and listened as Rex Nelson named off finalists and winners of each of several special awards.

There were about 300 people who voted for this first Arkansas Food Hall of Fame, in a selection of categories - People's Choice, Best Proprietor, 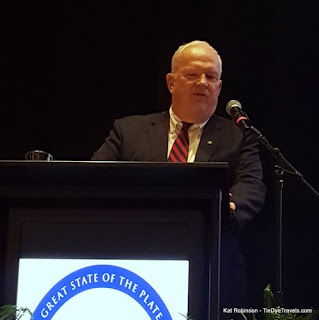 Best Food Festival, and Best Restaurant. I suspect we'll expand the program next year. This time, though, we celebrated these individuals, events and eateries with plates to put on the wall and a party.

The first to be announced was the People's Choice Award - whch went to The Grotto Wood-Fired Grill and Wine Cave in Eureka Springs. 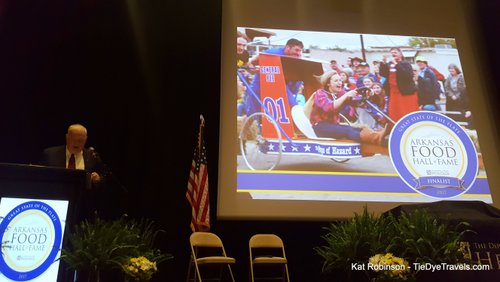 Then we dove into the best Arkansas Food Themed event. There were laughs with the first announced finalist - the Annual Bean Fest and Great Arkansas Championship Outhouse Races in Mountain View - represented by photos from both the festival and those outhouses rolling along.  I was glad to hear so many of those famous events I've had the chance to cover mentioned - the Gillett Coon Supper, the World Championship Duck Gumbo Cook-Off in Stuttgart, the World Cheese Dip Championship in Little Rock and the Cave City Watermelon Festival - the last of which won that category.

There was not a single person in the Proprietor category that didn't deserve to win at last night's event. I've grown to know, adore and befriend these gantastic individuals over the years, and they have each provided me with oodles of information to help me in my research of Arkansas food. And while Joe St. Columbia of Helena-West Helena (Pasquale's Tamales), Capi Peck of Little Rock (Trio's)  and Scott McGehee of Little Rock (Yellow Rocket Concepts) are all both deserving and probably fututure winners, 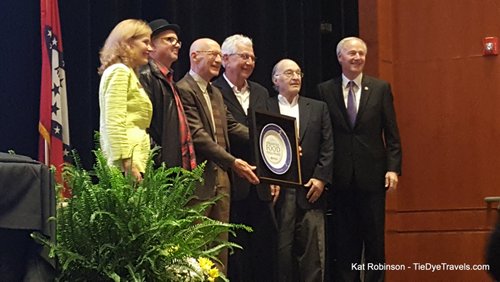 it was the Continental Cuisine partnership, which started with Jacques and Suzanne's and still holds a legacy with more than 20 different restaurant descendants in this market - that won the award. It was thrilling to watch Paul Bash, Ed Moore, Louis Petit and Denis Seyer take the stage to accept the award.

Again, each of the 12 finalists for Best Restaurant in Arkansas was more than worthy. Restaurants that had spanned not just decades but generations were up for this award: 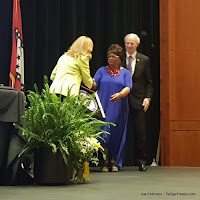 The first winner, James Beard American Classic winner Jones Barbecue Diner of Marianna - which drew plenty of applause followed by laughter, as Mrs. Jones came up to accept the award. Mr. Harold, it seems, was too busy making sure tomorrow's meat got smoked. 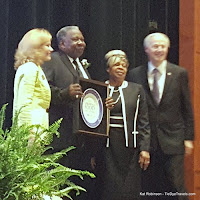 The second announced winner was the long-running Lassis Inn, famed for its buffalo ribs and No Dancing sign. Mr. Elihue Washington Jr. proudly took the stage to great applause. 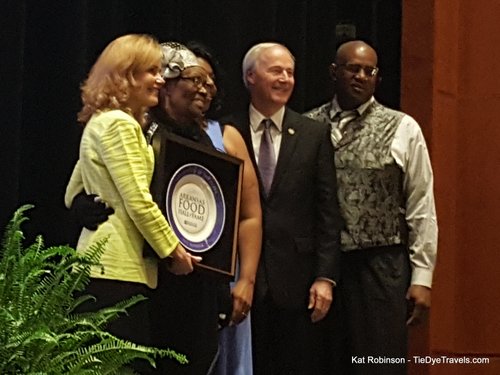 The third and final winner, Rhoda's Famous Hot Tamales and Pies, received similar applause. And I declare, Ms. Rhoda Adams sure dressed up in her finest. I'll be heading her way again soon (but I can't tell you quite yet why, so stay tuned).

It was an incredible evening, where a lot of amazing people were recognized as finalists and winners for their part in the Arkansas food story. It was also a great moment to look back on how long it took to bring this to fruition... I remember the conversations Marla Crider and Kerry Kraus and I had some five years ago over what sort of requirements it'd take to make this happen when I was at Parks and Tourism, and I have been thrilled to be part of the process as the Department of Arkansas Heritage has developed it into the program we finally got to share last night.  Something tells me now the word is out, we'll be sharing far more of the Arkansas food story with others both inside and outside our Natural State.

Which brings me to this - while recognizing our native restaurants, chefs and festivals is important, it's also necessary to define, refine and educate on the principles of our native cuisine. That's part of the reason why I've decided it's time to teach. On March 28th, the first of many seminars on Arkansas food will be held at the University of Arkansas - Pulaski Tech Culinary Arts and Hospitality Management Institute in Little Rock. I'll be working with Chef Billy Ginocchio, who will be preparing and sharing how to create Arkansas delicacies as I expound on the history and culinary culture of our state. Learn more here and find out how to sign up for these courses.

* A note - if you haven't taken advantage of the fantastic food trail guides created by Kerry Kraus when she was ADPT, you really need to check them out. Here's a link to the Cheese Dip Trail to get you started.