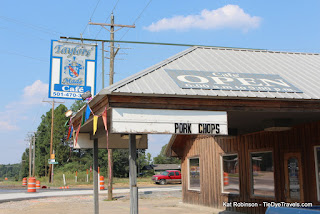 I lamented the folding of O'Henry's a while back. My travels haven't had me out on Arkansas Highway 365 in a while, so when I was passing through the area recently and had a hunger in my belly, seeing a new shingle hung on the old restaurant was enough to get me to pull off the road. 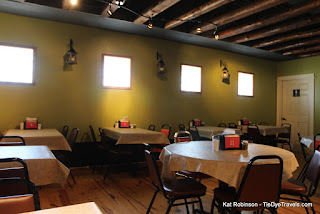 Taylors' Made Cafe's entry into the space hasn't changed much on the outside, or the inside, for that matter.  But the instant I walked through the door I was happily greeted and offered any seat I like.
I will mention that I had come in just after 2 p.m., so whatever lunch rush might have taken place was long over.  Everything was neat as a pin.

The menu at Taylor's Made Cafe is far more downhome than its predecessor, with a smattering of salads and burgers and sandwiches and a selection of complete dinners.  The vegetable side offerings are extensive and include everything from coleslaw to pinto beans, corn, onion rings, mashed potatoes, Great Northern beans, green beans, French fries, tater tots, blackeyed peas, fried okra, fried squash, baked potato and rice pilaf.  I dithered over the idea of a vegetable plate based on those offerings alone.  I also dallied over the idea of a hot roast beef sandwich over Texas toast, but the temperature was hovering close to the three digit mark. 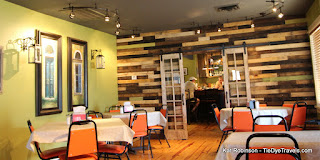 I noticed there were pies on the board and made a mental note to come back later (I have been laying off the pie lately, I know, a shock).  Breakfast was also mentioned on the menu, and at some point I think I'll have to come back and try the pancakes.  I also noted that bologna is on the list of breakfast meats.

There was a scramble in the kitchen, and a lot of clattering.  I heard the hiss of frying, but not the bubbling notes of a deep fryer.  No, I believe I heard the sizzle of a skillet, and there was much banging around here and there. The menu said deep fried, but I do wonder if maybe, being the only customer in the dining room at the time, if perhaps... oh, who knows? 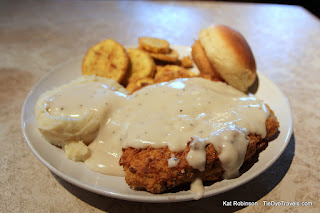 And soon, this marvelous plate was delivered to me -- a fine chicken fried steak with fried squash and mashed potatoes, a cream gravy over both potatoes and steak, with a Parker House style roll to boot.

Now, I've had many a fine chicken fried steak. What 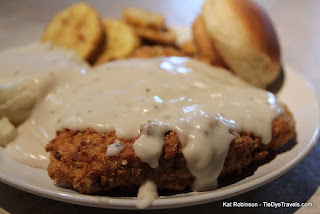 spoke to me most about this one was its texture -- quite certainly cubed steak but substantially so, tender yet firm, with this rather extraordinary allowance of salt and pepper.  It was simple, sure, but it tasted like the kind of chicken fried steak I might have at home.  The breading was 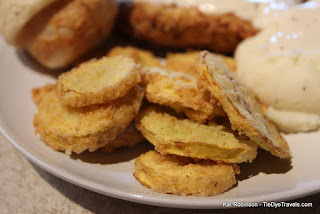 also simple, just that flour and salt and pepper.  It was delectably savory but not overwhelming, the sort of thing that should stick to your bones for a long time afterward.

What really impressed me, though, were the slices of yellow squash that had just been lightly seasoned and dropped in the flour.  No heavy breading here... this was good, old fashioned south Arkansas style fried squash, and you could taste the squash itself.  Sometimes I get rather bored with fried squash at restaurants, especially when it's obvious it's been machine-processed, but this was the work of someone who knew how to cook and wasn't afraid to let the flavor of the vegetable shine through.

I'll have to drop in at Taylors' Made Cafe sometime soon with friends.  There is construction in the area where the new exit off I-40 is coming in, but inside it's pretty and it's quiet, and there's a bar in the back room. I understand there's often live music in the evening, and the place is open quite late, until 10 p.m. most days and to midnight on Friday and Saturday.  Drop in and let me know what you think. 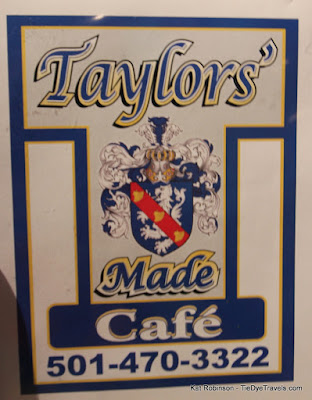 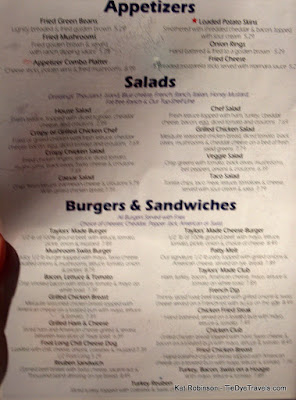 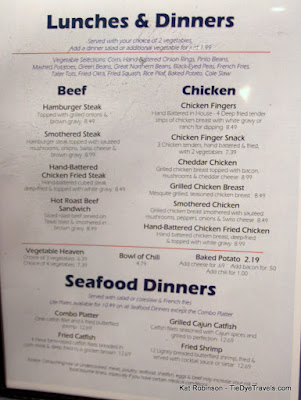 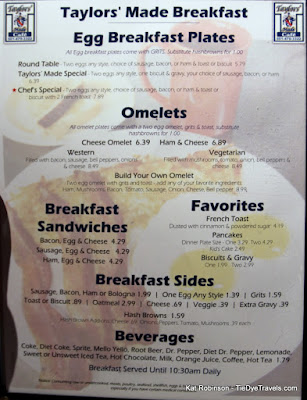