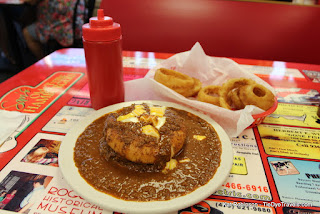 I could say I've never met a burger I didn't like... but that would be a lie.  There have been some disappointments out there.

But not at Sam's Olde Tyme Hamburgers in Rogers.  Oh, no.  What I encountered at the red-awning decked shop on the east side of town was a messy, gloppy marvel of excellence, with a perfect patty beneath. 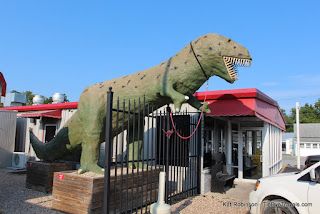 I dropped by one August afternoon on the way back from another assignment.  I saw a dinosaur, that's why.  No, really.  I was heading out to War Eagle Mill and saw the big green T-Rex hanging over a fence.  So of course I had to check it out.

I should have recognized the joint right off the bat, but I didn't, because it's not the same joint.  Sam's moved here in the past couple of years out to this bigger spot, which is why it didn't immediately ring bells for me.  No worries, I was here now.

I was quickly seated in a booth next to a group of three teenage girls.  I have a girl my own, but not of that age yet, so once I ordered that chili cheeseburger (with the suggested grilled onions, without the suggested mustard) I allowed myself to follow their conversation, which ranged from boy talk to other girls in their class to quick strains of songs sung, from Aretha Franklin to Dora the Explorer.

Yeah, it was a little strange, to say the least.

There was a couple celebrating a birthday at the next table, and I kept seeing big plates go by full of food, from chicken fried steak to fried pickles to ribs.  They all looked tempting.

And then this arrived at my table. 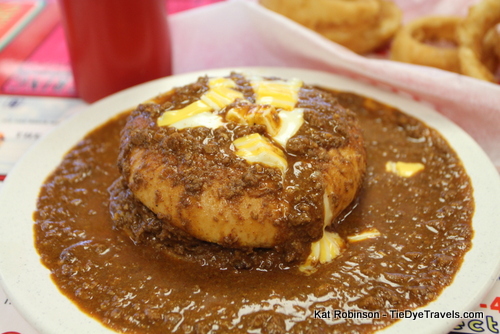 At first, my brain did not entirely comprehend what was before me, which first appeared to be a plate of chili that had attained some brief enough measure of sentience to rise from the surface. 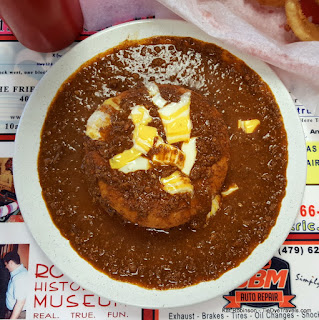 Then it became to clear to me, this mountain of chili that had spread to every edge of the plate was consuming -- and I do mean consuming -- the entirety of this burger right before my eyes.  Though topped with some hand-sliced bits of marbled cheddar on top, it was apparent that the chili had won in this epic conquest of my burger's bun.

It was beautiful, brown and hot and steamy, and it cued my reaction.  Even after all the burgers I have seen and eaten, even after years of the state fair circuit and the collection of more than 200 different Arkansas burgers, even I was astounded and uttered a quiet "wow" on delivery. 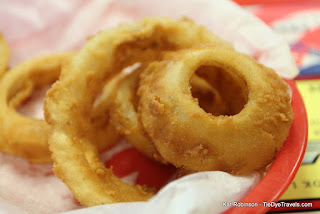 My waitress had also given me the option of fries or onion rings, and I'd chosen those rings.  They were a 60 cent add-on but they were worth every bit of it, hand battered and crisply fried and rather sweet.  They were certainly ketchup-worthy rings, and I utilized the squeeze bottle on the table handily to make sure they were propery ketchup-laden. 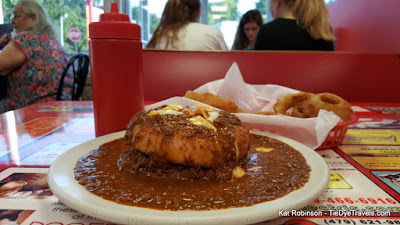 But that burger... golly.  I was not kidding when I said it was consumed by the chili.  There was never any thought of trying to pick this burger up.  While the bun was firm on arrival, it slowly deteriorated into a pleasant paste under the weight of the beans and meat.  Forget a fork.  You could eat this burger with a spoon.

But I managed with the fork, enjoying those sweet grilled onions and the firm 1/3 pound patty.  All the time there was a voice in my head warning me of the gastronomic challenge I had taken on, with whispers of heartburn in my future. But I did not care. I pulled my fork through the puddle on my plate again and again and again.  It reminded me of the eating of chipped beef on toast, what my military friends called SOS, but with a flavor I could not refuse. 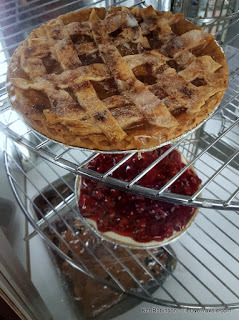 I had intended to consume half.  Nope.  It was all gone, and I knew that meant I had no room for pie.  That, indeed, was the greatest tragedy, since the first pie I had spotted had caught my attention -- a cinnamon-and-sugar laden lattice pie full of apples that was undoubtedly hand-crafted.  I heard other concoctions from the case mentioned, including chocolate meringue pie and icebox pie of some sort and a confection in a 13"x9" pan at the bottom that contained pineapple and coconut and heaven knows what else.  But my gluttony over a single chili cheeseburger and a side of rings had 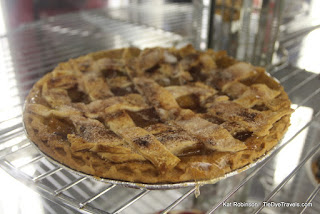 made more eating nigh on impossible the rest of the night.  The vision of that apple pie still haunts my dreams.  I will return for it. 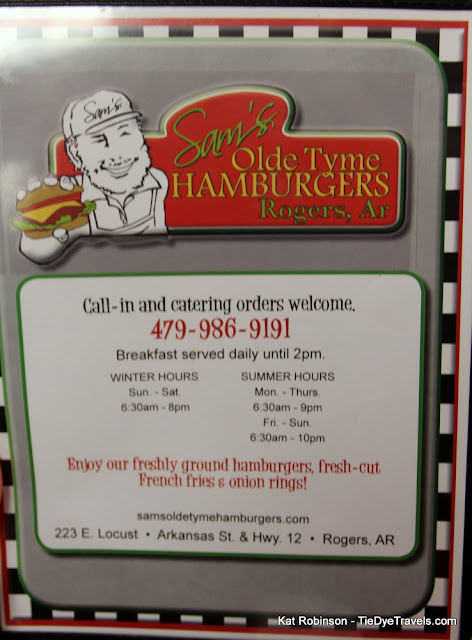 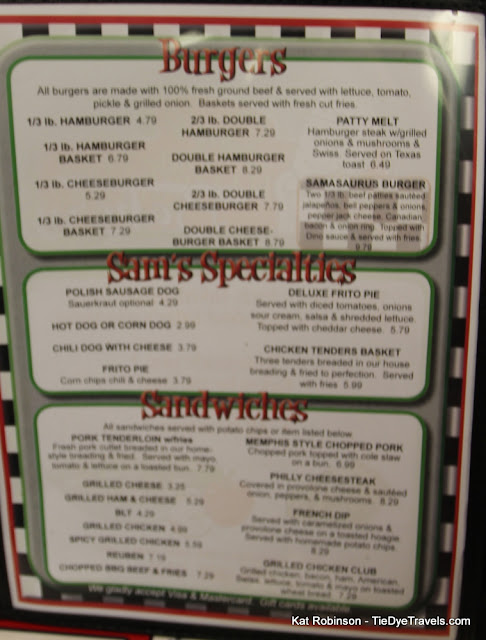 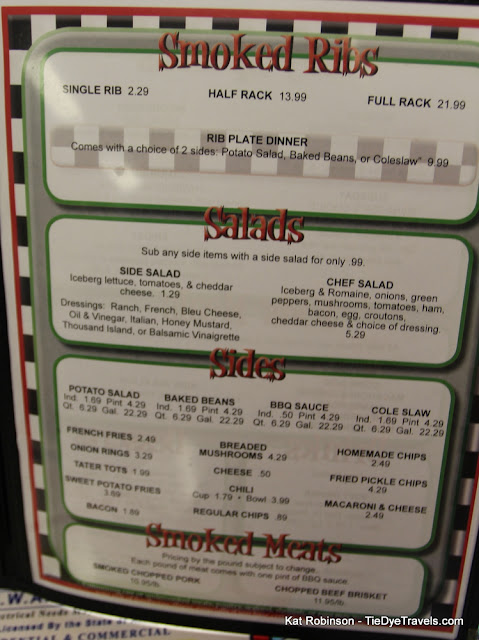 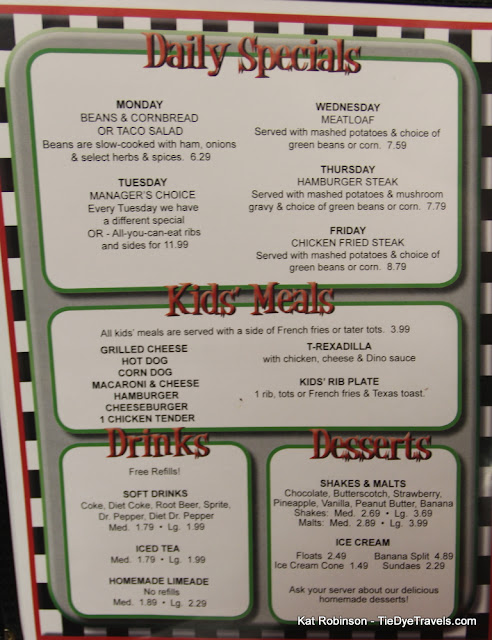 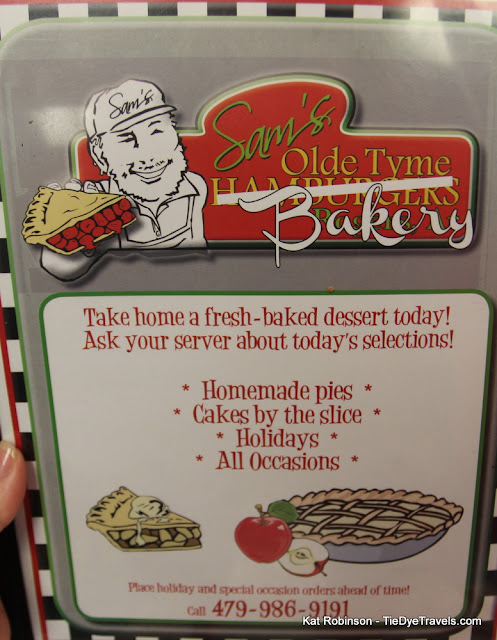 I've had my share of burgers. I've logged more than 200 different burgers of worth just within Arkansas's borders. Yet...
Posted by Kat Robinson on Wednesday, September 2, 2015