Early to Rise at Old Mill Bread and Flour Company in Little Rock.

Have you ever had an Everlasting Gobstopper? Those jawbreakers seem to last forever.  Well, I've found the everlasting gobstopper of cinnamon rolls, right here in Little Rock, at the Old Mill Bread and Flour Company.

There are restaurants and bakeries that make larger cinnamon rolls, but none so twisted and curled as that at this Rock Creek Square eatery. Lo, one can spend half an hour unrolling the handmade, textured sweet thing, savoring each recently warmed bite, getting sugar and cinnamon everywhere. 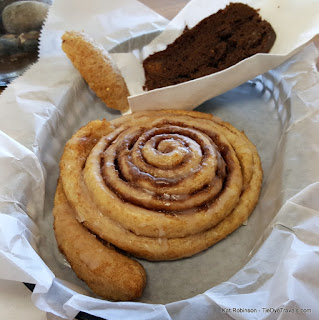 At least, I did, on my latest visit.  Old Mill Bread and Flour Co. is a special treat for me, as I never get in and out quickly.  There are always a number of fresh baked loaves available, and buns, and a whole case of sweet pastries.  But even when I do just plan to drop in and walk out, I'm lured by the breadboard up front, where no matter when you go, there's a slice of fresh-baked bread waiting for you.  There's butter, 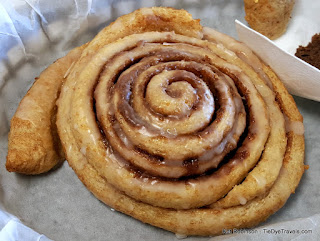 too.  Add in the heavenly scent that greets you when you walk in, and... resistance is truly futile.

Old Mill Bread and Flour Company has been around a while.  Back in 1992, Jeanie and Jim Berna came up with the idea to create this bakery that would bake fresh every day, offer those baked goods at fair prices and give customers an excellent experience.  They have high protein wheat shipped in from Montana, and they grind what they need each and every day.  There are very few places that can claim that today. 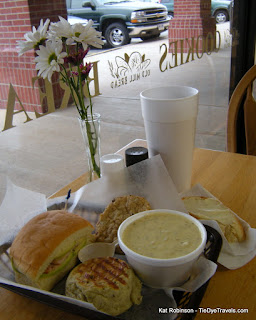 Now, from time to time I have to drop by and get myself a sandwich for lunch.  The Turkey Swiss and Apple is a favorite of mine.  I mean, sweet and salty, hits all the right notes, on a nice French bread roll, what's not to love?  It comes with mayo and olive oil, but sometimes I like to substitute with a little honey mustard instead.

Any time, you get more bread.  Seriously, if you like carbs, this place is your mecca.  For instance, that photo there shows that Turkey Swiss and Apple sandwich served soup-and-sandwich style with a hearty bowl of cheddary broccoli soup (which is just marvelous once that nip of fall comes into the air), and the soup-and-sandwich always comes with a roll.  That there photo shows off one of the spinach feta rolls... which are also available in bread form on that particular day of the week (spinach feta's an everyday bread).  There are also cookies and other sweets. 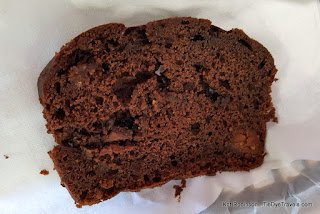 And... that slice of bread. Yeah, as I said, doesn't matter when you go in, there's always a slice of bread waiting for you. That day it was a French loaf.  This latest visit, it was triple-chocolate bread. Oh, golly.This would have been breakfast on its own just about any other morning. Rich, 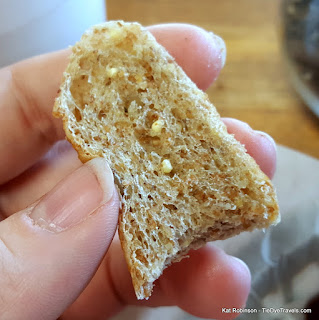 sweet, so moist it was almost juicy. It didn't need the butter offered on the board, and I loved having something different along with my breakfast.

The flax roll slice I was offered was another surprise, and it didn't need butter, either. I was let in on the knowledge that this one's being developed for use at Good Food by Ferneau. Donnie, you will not be 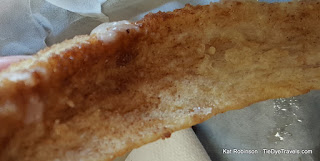 disappointed in this pliant, flavorful roll. I need something with avocado and smoked turkey on this.

But that's not what I started to talk about. I was discussing the cinnamon 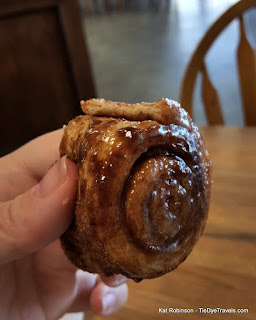 roll. See, being an expert on cinnamon rolls (at least, I have certainly eaten enough to be considered at least somewhat of an expert), I know how I like them. Sometimes I want one that's airy, sometimes one that's uber sweet, sometimes one that's not frosted at all. When I seek one out at Old Mill Bread and Flour Company, I'm looking for a cinnamon roll with texture.  I get that, thanks to the house-ground flour.  I also get a roll that's slam-packed with as much cinnamon as makes any sort of sense.  The dough for the rolls is thin but tender, coiled up tight and just sugary enough to make it a ridiculously sweet delight.

And best of all, when you come in for a sit-down and you order a breakfast pastry, you can have it warmed... that is, if it hasn't just come out of the oven.  Which, actually, is quite common.

Cinnamon rolls coiled tightly, packed with cinnamon and sugar, slightly heated and served warm... well, if you eat cinnamon rolls like I do, 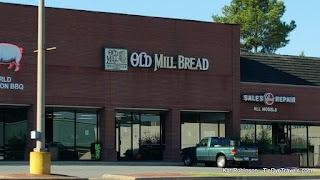 it's going to take you a while. That's right, I unroll mine. That may make me weird but it also means my cinnamon roll lasts as long as my first cup of black coffee -- which, by the way, is offered in pairs each day, a flavored version and a regular caffeinated version.  There's also free refills of said coffee, iced tea and soft drinks, plus bottled juices and Mountain Valley Spring Water.

So when you go, give yourself some time.  Have a seat and savor that warm bread, whether it's a cinnamon roll or a scone, a roll with your soup or the bun on your sandwich. Enjoy the vapors (is that how they still put it?) and relax for a little bit.  And take home a loaf for later. 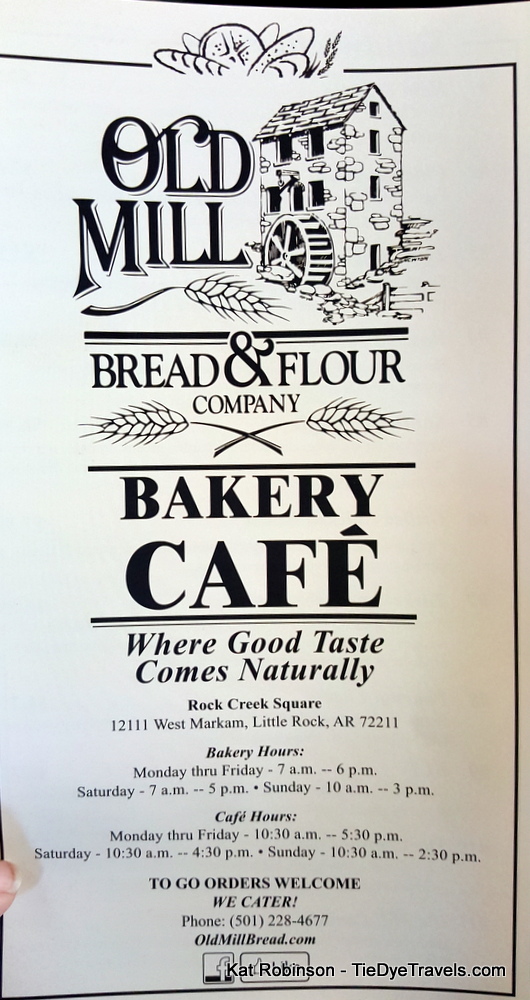 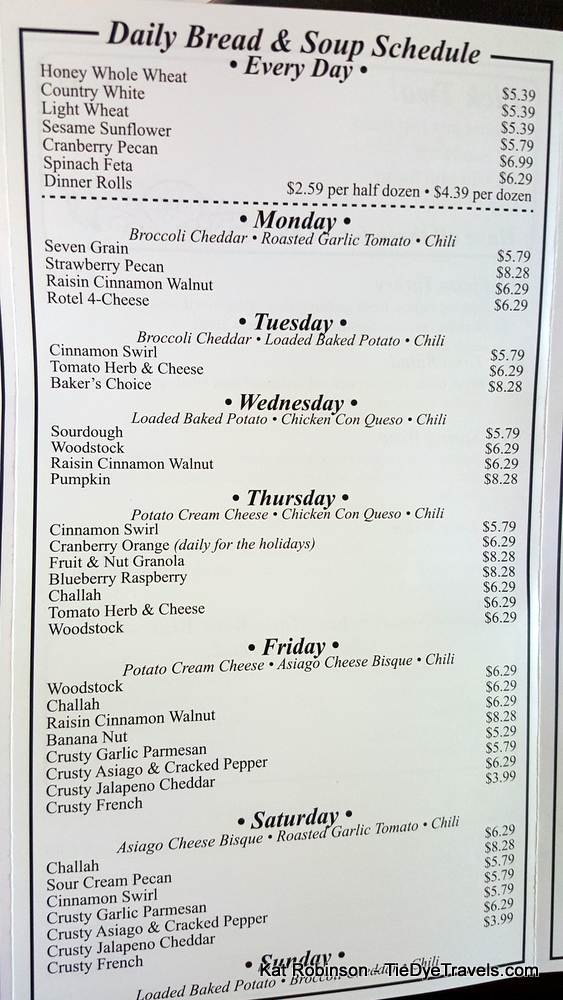 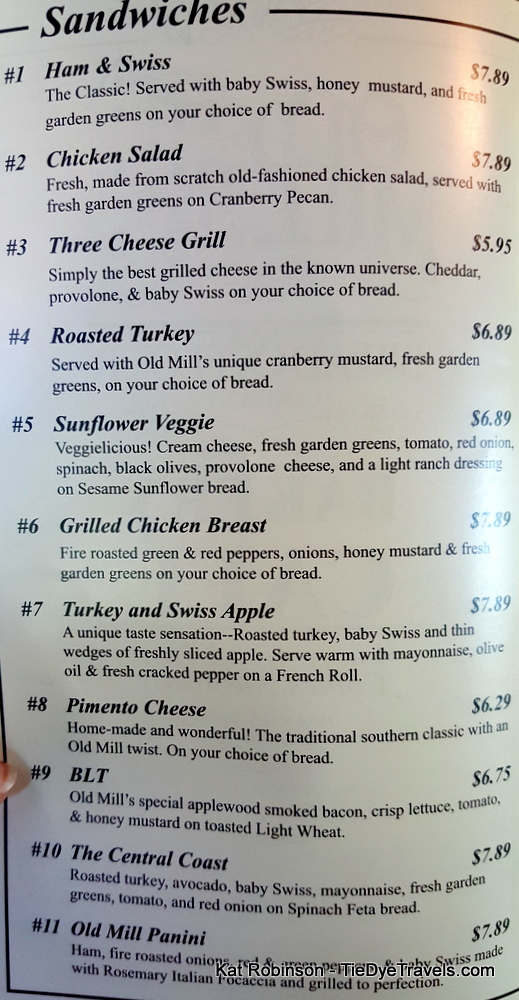 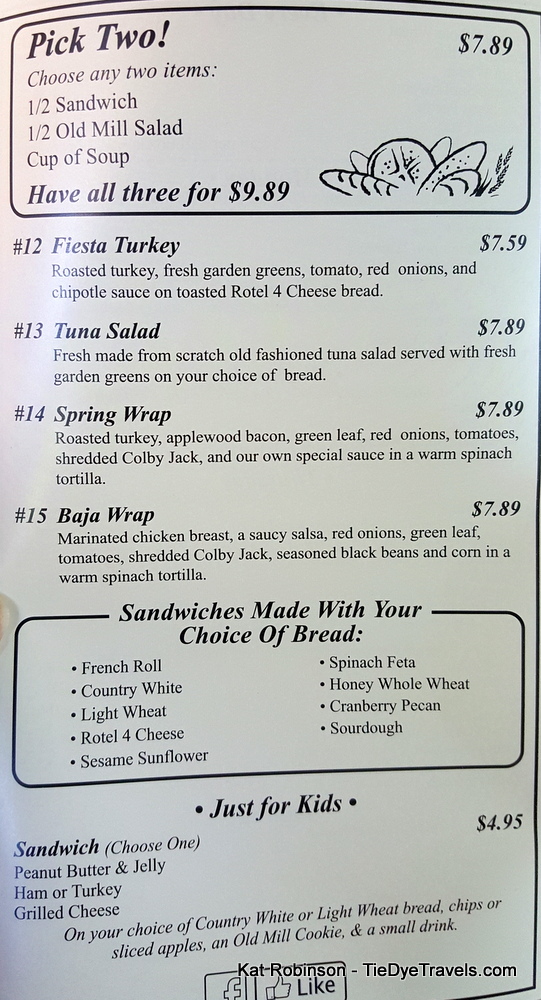 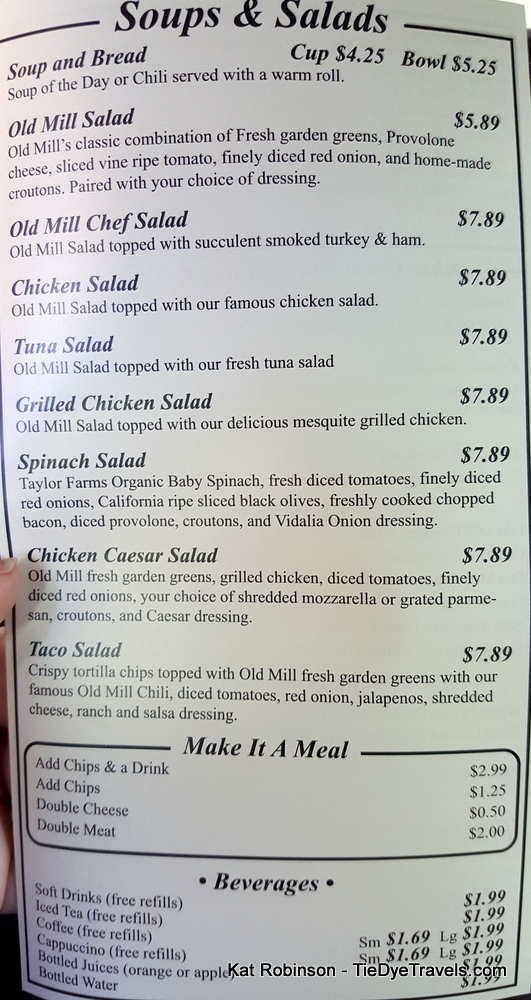 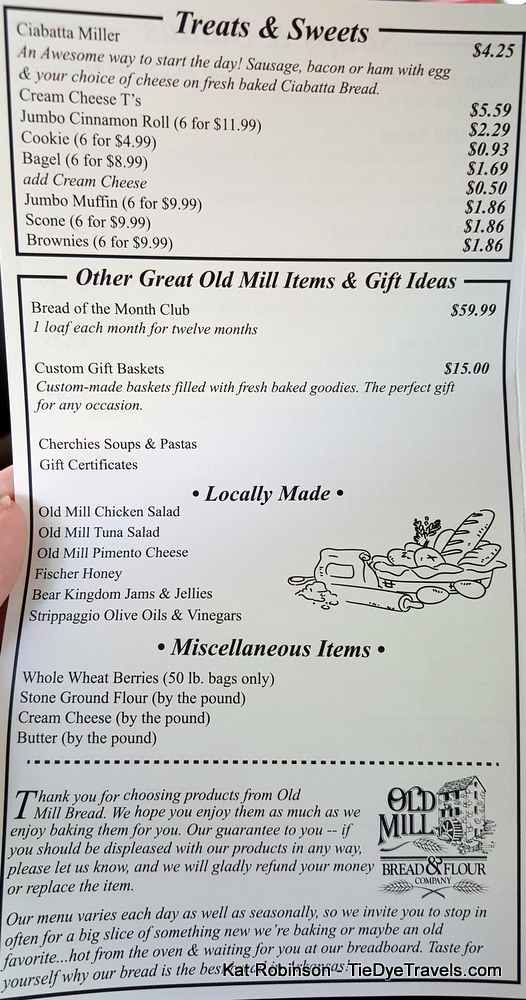