Taco Mama, Freshest Mexican In All Of Hot Springs. 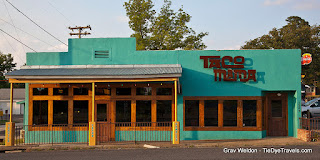 You can’t swing a dead cat without hitting a Mexican restaurant in Arkansas… whether it’s authentic, Tex-Mex or Ark-Mex. Some are good, some are decent, some you wonder how and why they survive.

But no one ever asks why Taco Mama survives. They already know. It’s magnificent.


The former hardware store on Malvern Avenue in Hot Springs is brightly colored and hard to miss. It sits on the same lot with its sister restaurant, Café 1217, along with Peters’ Furniture and a very large, trailer-borne bull.

Taco Mama was inspired by Diana Bratton’s mother. Bratton came to Arkansas as a newlywed in 1995. The eighth of nine children took a test 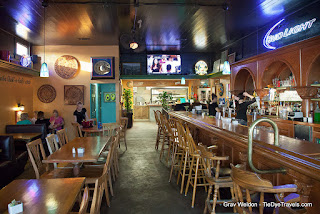 in school that determined her best chances at success were working as an artist, clothing designer or chef. Her dad didn’t want her to go into culinary work, so she went into fashion merchandising instead. Five and a half years later, she had enough with that, and with her mother’s encouragement, went into culinary school at El Centro in Dallas. While she was still a student, she was hired on at the esteemed City Grocery, where she worked her way up first to sous chef and then a full chef in the restaurant. 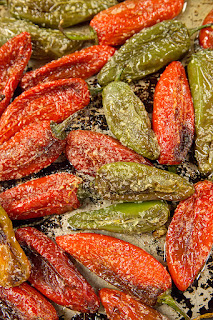 She was at City Grocery for seven years before she married and moved with her husband to Hot Springs. She landed a job with Diamante but quickly decided she needed her own place. That place turned out to be Café 1217, at first a small fine dining restaurant with a counter that grew out into space in the same building as other tenants left. The menu changes constantly, and Bratton’s life changed, too – when her first marriage crumbled, her mom encouraged her to stick it out in Hot Springs, and it wasn’t long before she met the love of her life, Shane.

While that aptitude test may have shown Bratton how she’d fare at a certain career, she came by cooking naturally. Her parents were very big on eating together when she was a kid, and her mom made every meal, breakfast, lunch and dinner, except on Saturday nights. "We never even went out to

eat,” Bratton told me. “[Mom] brought to go burgers or pizzas on Saturdays. It was the only time we could have a soda. Only time we could drink a Coke was on Saturdays when my parents would go out dancing. But Sunday morning, even if they got in late, she was rolling out tortillas and making salsas and frying eggs and potatoes and whatever else, making chorizo, just whatever she was inspired to make.”

Her mother passed away five days after a cancer diagnosis. She had always been a profound influence on her daughter. Nine years ago, the little hardware store next to Café 1217 went up for sale, and with encouragement from Shane, she bought it and created Taco Mama in her mother’s memory. And for the Hot Springs food scene, it has changed everything. 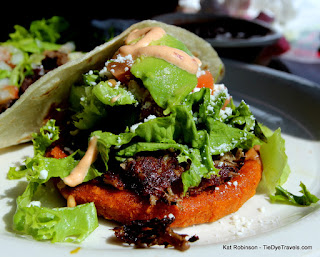 No, I mean it. When I started writing about food in 2007 and began trying to answer the question of what Arkansas food might actually be, when I asked about Hot Springs I got back the word “stodgy.” There are fantastic, ancient restaurants on the scene in the city – The Pancake Shop, McClard’s BBQ, Stubby’s BBQ, Bailey’s, King Kone, Rod’s Pizza Cellar, Fisherman’s Wharf – but each is set in its own, self-successful way. The town’s culinary scene had grown towards suiting the older residents and tourists who came in for Oaklawn or for the lakes, and innovation had stalled. Café 1217 changed that… but Taco Mama defined what that change actually was. 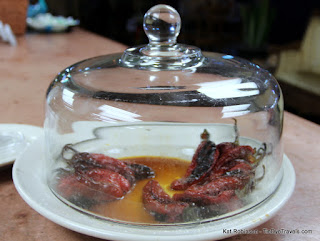 It’s fresh. No, I don’t mean that as a buzzword. The ingredients are fresh. The freshness isn’t covered up with too much spice or cheese sauce. Beans don’t come from a can, they come from a garden. Peppers are fire-roasted, and, if you really want one, just get one off the counter.

Taco Mama was discovered by folks covering the Little Rock food scene quickly. Word spread fast about this cute colorful place on Malvern Avenue, and the critics and bloggers alike headed southwest to see if it was true. Hot Springs discovered it, too, and business has not slaked.

Is it any real wonder why? It shouldn’t be. 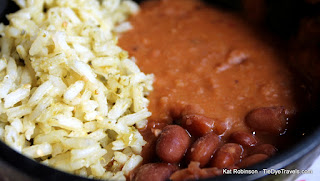 It’s like the beans. So many places getting beans from a can these days… in fact, ask Diana sometimes about canned products in Mexican foods – or Mexi-CAN as we were laughing one day. No, the beans are fresh. There are pintos, there are black beans, and 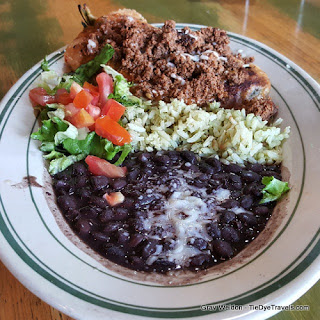 there are refried beans. And they’re all fresh and flavorful, thanks to the seasonings the family has always had with these. The rice is flavored with cilantro but not so strongly as to be annoying, like at other places.

Maybe that’s the point. Taco Mama isn’t like the other place. It’s not jaded and it’s managed to keep serving good Tex-Ark-Mex foods. The peppers and tomatoes… egads. 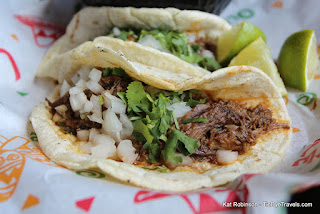 Tacos, of course, are what you should get when you go, though the menu is packed with all sorts of other similarly-priced options. There are several sorts, including chicken, chorizo, ground beef, lengua, pork, shredded beef, steak and vegetarian. Each has its own marvelous blend of 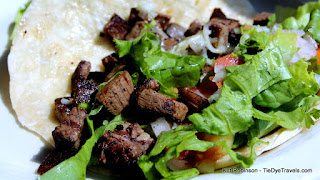 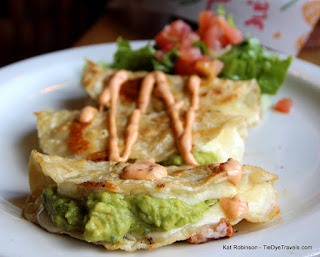 And then there are the puffy tacos. These are housemade jewels of corn tortillas, crispy on the outside yet soft within, wrapped around cotija cheese and a filling, whether it be a meat or the avocado-strong guacamole. They ooze just the slightest bit each bite, slightly salty but absolutely perfect, especially if you want to 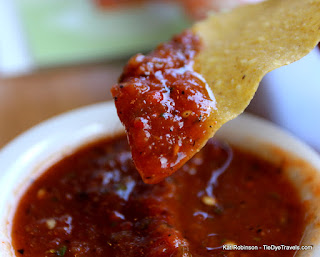 dip them in salsa.

Taco Mama’s salsa is singular, too. The tomatoes are roasted alongside the peppers and onions, and the flavor of fire is smooth and sturdy. It’s a full-bodied salsa, deep red, translucent in places but not cloudy. It’s perfect with those thick yellow corn tortilla chips. 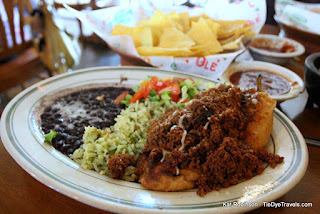 There are other things at Taco Mama besides tacos. There are chile rellenos, which are gorgeously battered cheese filled poblano peppers served either on their own or with a choice of “filling,” actually a topping of a choice. This one is topped with a blend of finely ground beef with a chorizo-style flavor. 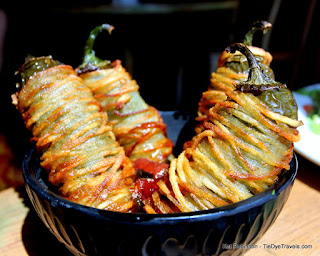 Peppers are everywhere at Taco Mama. Nowhere, though, are they as celebrated as in the Sweet and Hot Tomato Crusted Jalapeno Peppers. These are thumb-sized masterpieces stuffed with cream cheese, wrapped in potato strings, deep fried and served with sweet strawberry-jalapeno jam. They are killer – as in, you might cause yourself 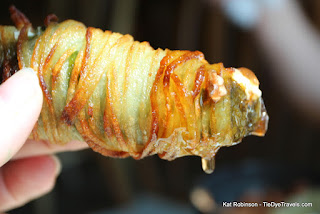 permanent injury on them. The crusty potato exterior gives more crunch to the pepper, and its heat is enough to make you cry. But then you hit the cream cheese and the sweetness of the jam and you’re relieved… enough to try it again. Every time I have them I want to eat them all, but know every bite is a certain punishment. They’re truly a masterpiece. 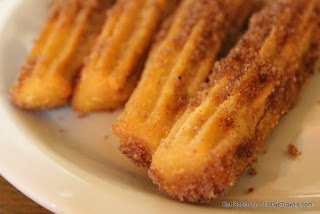 There are the churros, of course… the only one of the desserts I’ve ever tried at Taco Mama, since I’m usually done after swapping tacos with whomever I’m dining with. They’re delicate tubes of cream-packed cinnamon-crusted sin, and they come with a completely unnecessary but also irresistible pot of dark chocolate sauce. 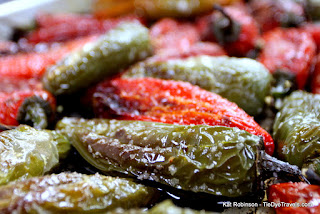 Thing is, Taco Mama is ridiculous. It’s too dang good, and it’s a fantastic thing you need to experience. There are a lot of other people out there that will back this up, and they’re not wrong. But maybe you should just make up your own mind. I have a feeling you won’t be disappointed. 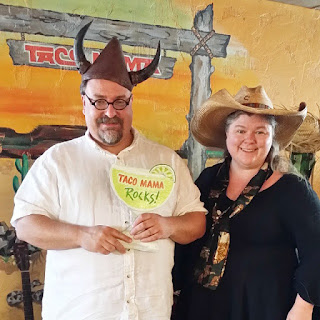