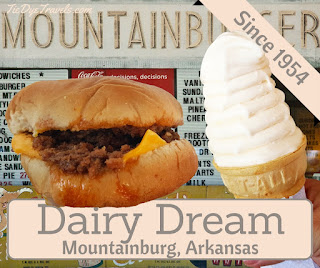 I've been playing tricks with your head.  I've been sending people to the Dairy Dream in Mountainburg for many a year now, for a certain mythological item called the Silver Saddle.  I can tell when someone's taken my advice, because they don't ask me what's in a Silver Saddle any more. They just nod and smile. 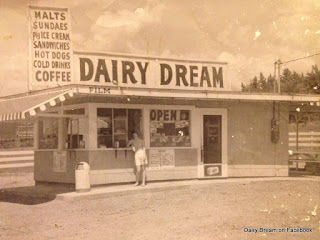 Dairy Dream is a little roadside dairy diner on the north side of Mountainburg.  When I was a kid, it was a lucky stop - as in, I'd be lucky if I got whomever was driving the vehicle I was in to stop at the place.  It was located on the road up to Fayetteville, a few miles before Artists' Point, where you turned off to 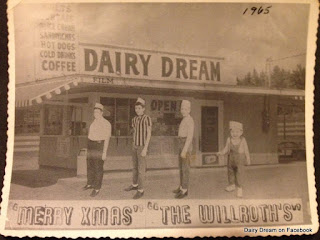 go to Lake Fort Smith State Park.  And stopping there meant an ice cream cone for sure.

The Dairy Dream began in 1954.  Robert Willroth started up the two-window drive in back in 1954. He passed it on to his son Jerry, and Jerry's family runs it today.  The opening of the 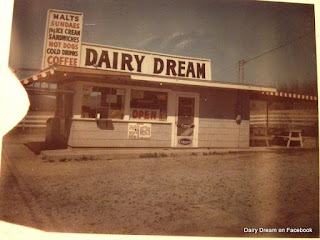 Dairy Dream is synonymous with the end of winter... once it's open, snow is not allowed to fall until late autumn, once the Dairy Dream has closed for the season.

The small brownish stand on the east side of the road looks lonely when it's out-of-season, but during the warmer months 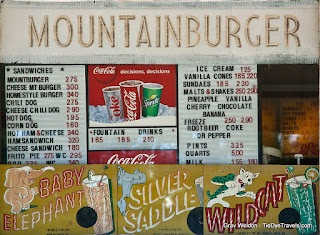 there's a steady clientele, a blend of locals and travelers and people who seek out the drive-in just because they've heard about it.  The menu really hasn't grown that much over the years, but it does start with the Mountainburger, and that's where we'll start, too. 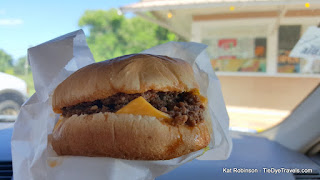 The Mountainburger happens to be the only loosemeat burger I have come across in Arkansas with any measure of success.  The ground beef concoction is similar to a Sloppy Joe, with more meat and less sauce.  Paired with mustard, 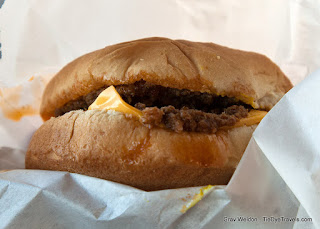 pickle and onion and a slice of cheese, it's a flavor that's part old fashioned cheeseburger, part family-recipe meatloaf, but it works.

It's cheaper than the Homestyle Burger, which is more what you're expecting from a burger place.  But you need to get the Mountainburger at least once.  It really is something you cannot get anywhere else, at least, nowhere else that I've found. 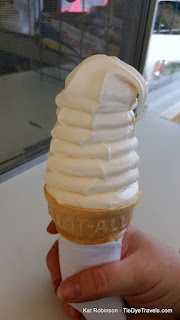 The Dairy Dream does sell corn dogs, Frito chili pies and all that, but it's best known as a place to get a cold treat.  On a hot summer day, that choice is an ice cream cone, and rather than just stick with tiny cones and squirts of soft-serve, Dairy Dream offers three cone sizes... this is the largest, and as you can see from the size of my hand, it's a pretty large cone.  Enough for me and Grav both, turns out.

There are sundaes and freezes, malts and shakes on the menu.  And then, at the bottom of the front window, are signs for other concoctions.  I've been telling people to go get a Silver Saddle for years, and been quizzed about it.  It's been the way I can tell if you've been to the Dairy Dream or not, for real. This time,

Grav actually asked, since I would tell him, and the girl at the window let the cat out of the bag. 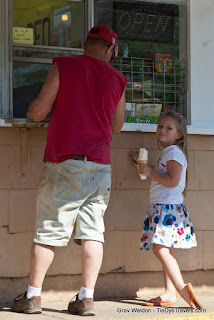 "A cherry soda," she responded.

He turned and raised his eyebrows at me before continuing,  "And a Baby Elephant?"

"A Sprite with cherry in it." 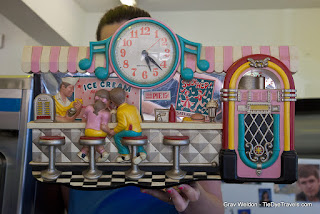 He looked at me, and I looked at him and I just grinned my fool head off.  He asked to see a clock at the back of the shop, and while he was photographing it I shot the heck out of that ice cream cone, which was about to melt. 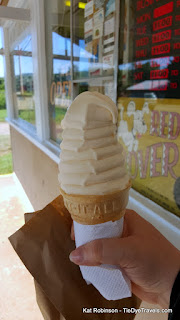 I kept taking photos of the melting cone.  I finally had to remind him to shoot it before it dripped all over my hands.

And yes, dear friends, those crazy wild names are just soda names from a time long ago, something to capture your imagination as the Dairy Dream does mine... when I'm hot and traveling and want a cool beverage or ice cream.  The Dairy Dream is one of those throwback stands you should stop at when you're traveling, because there's nothing like the taste of a cold cone full of soft serve vanilla ice cream on a very, very hot day... or the sticky sensation you're left with once the cone is gone. 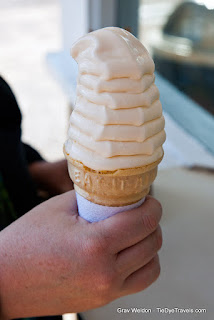 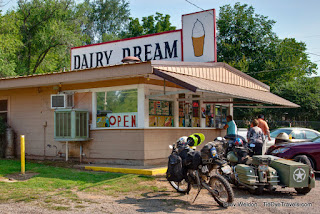