You Can Find Anything You Want at the Grant County Museum in Sheridan.

The ten acre compound features one gallery after another, organized in a massive building that's seen several expansions; and within a village created from original buildings organized to give children and adults a like a working knowledge of everything Grant County.

The Grant County Museum was originally located in an old general store near the heart of Sheridan. Grants and donated land allowed a new facility to be built, and as the collection has grown, so has the museum. The main building consists of several galleries that include everything from
clothing from the early 19th century, to displays covering commercial traffic along the Saline River.  Like classic cars? A fine selection of automobiles dating back to the 1920s crowd one large room, with delivery trucks, fast cars and even
a fire engine. Enjoy taxidermy? There’s an entire hall that showcases critters from the area’s forests, rivers and fields. Dig military history? An entire series of galleries covers local participation from the Civil War to the Persian Gulf.

An entire exhibit is dedicated to ARKLA, the Arkansas-Louisiana Gas Company, which serviced most of the state. Within, you’ll see an original ARKLA truck, various gas-powered appliances over the ages and the desk of Witt Stephens.


A downtown Sheridan barber shop is partially preserved within the largest gallery. The entire mirrored wall from one side of the old building is accompanied by an array of different barber and dental chairs. Nearby, a “scoundrel’s gallery” documenting different infamous crimes that took place in
Grant County, offers stories within wood and glass cases.

The northwest wing of the facility hosts a collection of Civil War memorabilia, including items showing what life was like back during the conflict. A special section commemorates the Battle of Jenkins
Ferry, the last significant battle of the Red River Campaign. Other galleries nearby contain items donated by Grant County servicemen and women who served in World Wars I and II, the Korean War, the Vietnam conflict, Desert Storm and Operation Iraqi Freedom.

Out back, you’ll find a large hangar packed with military vehicles. This is the Richard G. Harrison Military Vehicle Collection, which may be the largest privately-owned collection of U.S. military vehicles on display anywhere. Harrison, a Little Rock native, drove a Jeep and delivered secret 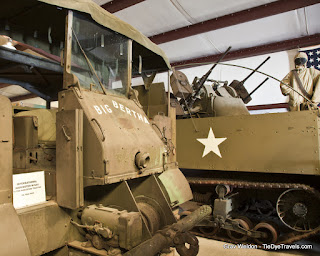 documents while serving during World War II in Hawaii. He donated the collection in 2002-2003. The selections include Big Bertha, a tank retriever and artillery vehicle; a Navy communications bunker; a Jeep similar to the one that Harrison drove while in Hawaii; and a monolithic camera that enlarged photos taken by planes to use for troop maneuvers and battle plans.

There’s also the Heritage Square, a collection of buildings from the 19th and 20th centuries that include a blacksmithy and old schoolhouse; the 1935 Toler Chapel; a townhome built in 1904; the 1872 McCool House (a dogtrot cabin); the town’s former Masonic Chapel; the Edward F. McDonald House (which
now houses displays for the town’s post office and doctor’s office) and the Hilltown Café, which was once Donaldson’s Café opened in 1927 on the outskirts of town. The collection also includes the old general store in which the original museum was once housed.

New to the property is a boardwalk that takes visitors out on an elevated walk through a forested section of the land.

Exploring the entire museum could take most of a day. School groups are encouraged. Visiting the museum is free for Grant County residents and a donation of $3 for non-residents ($1 for students).