Over the years, a series of lodges have sat atop the tallest peak along the Arkansas-Oklahoma
border. Today, I had a chance to tour the latest of these lodges, the brand new lodge at Queen Wilhelmina State Park. And it’s a knockout.


Robin Y. Borné, the architect who designed the revised look and feel of the new lodge, was on
hand today along with Arkansas State Parks Director Greg Butts, staff members from the department and member of the press for a special media preview of the lodge, which will open to the public July 1st.

So, would you like to see inside? Let’s take a walk through the newly renovated Queen Wilhelmina State Park Lodge. 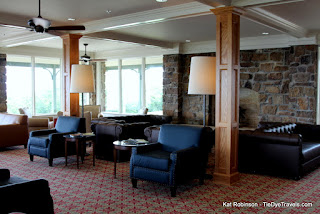 The new facility sits on the same footprint as the old one. Its last iteration’s rounded porch has been replaced with a new, two-story square edifice that looks out to the south from the mountain’s highest point. The lower portion is a new Queen’s Room, wonderful for congregating and socializing or catching a game of chess. Its major feature is a large stone fireplace, though it’s hard not to let your eyes wander to the vista just outside the windows that line the room on three sides. 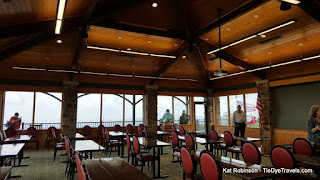 Above sits an ample conference room with a peaked wooden ceiling echoing the exterior design. The tabletops are brushed bronzed aluminum, lightweight enough for easy moving but sturdy enough for any crowds. Here also, three 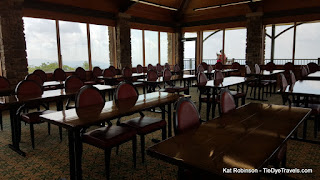 walls of windows capture marvelous sights, and two doors exit onto a balcony that takes in the best southern view. A special sound system and roll-down shades just might distract those conference attendees enough to pay attention in class.

The rooms have been heavily upgraded. There are now two more rooms, bringing the total up to 40. More space has been added to each one, and there’s now an elevator to access the second floor. ADA compliant rooms are located on the first floor. Each of the rooms within the facility include either one king size or two queen size beds. There’s a second floor suite available with a separate bedroom and living area.

Room 222 is bound to become a favorite. The king room at the west end of the building features a large stone fireplace, desk area, separate coffee area, plus oversized bathroom with jetted spa tub.

Even the regular king and double queen rooms measure up well, with great linens, comfortable furniture and stone tiled bathrooms with walk-in showers. The flat screen televisions are oversized, but they’ll have a hard time competing with the windows, which have been enlargened to allow visitors more scenic views. 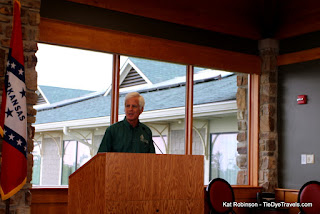 Sound good? Wait til you hear this. If you look out from the second story conference room, you can see the solar panels on the roof. The hotel is served with solar hot water, and there’s a new energy-efficient heating and air system for the facility. Energy-saving light fixtures are utilized
throughout the lodge.

Still, the best thing I noticed was the availability of power outlets. They’re everywhere. Jake Limberg, the park planner for Queen Wilhelmina, told me he
wanted to make absolutely sure every person’s power need was met. Every alarm clock has two power outlets on top. There are two outlets on the side of each nightstand. There are four under the television. You’d be hard-put to fill every power outlet in a room at Queen Wilhelmina. As a frequent traveler, I cannot emphasize how much this means. It’s ridiculously cool.

So, Queen Wilhelmina State Park Lodge looks really neat, and you may already be planning your next vacation there. But what is there to do? You know, I could watch that view all day. It’s a great retreat. And, if you have a child, you’re going to want to go down the hill a bit and go ride the
railroad. It’ll take you around the summit top.

And then there’s the restaurant. It’s not open yet, but I’ve been perusing the menus and they look pretty decent. The Santa Fe Salad is slices of grilled or fried chicken or steak served over tomatoes, black bean salsa, cheddar and sour cream on mixed greens. The Pickles and Peppers appetizer happens to be dill pickle and jalapeno pepper slices battered, deep fried and served with ranch. The house cheese dip is a white queso. 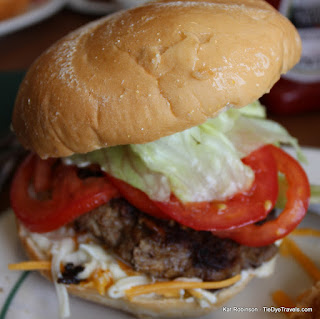 There’s a burger, a Reuben, a quesadilla as well. There are pork chops and chicken livers and farm-raise fried catfish dishes.

And then there are the steaks – a ribeye, sirloin or filet, plus the Burgundy Steak, a six ounce tri-tip marinated in burgundy and peppercorn sauce. Pasta dishes round out dinner offerings.

Breakfast offerings include Steak and Eggs, The Duke’s Breakfast (ham, bacon or sausage with hash browns or grits, toast or biscuit) and a breakfast burrito. There are omelets, pancakes, waffles, French toast and a fruit parfait to boot. 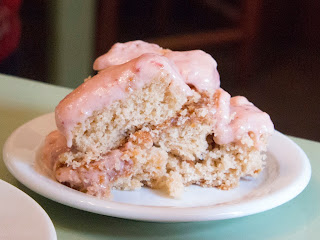 And for dessert, try the Hummingbird or Mom’s Chocolate Cake, both winners; peanut butter, Key lime or pecan pie; cheesecake or cobbler and of course ice cream.

Which means, of course, I have to go back… and I will, soon.

So, hungry to get up to 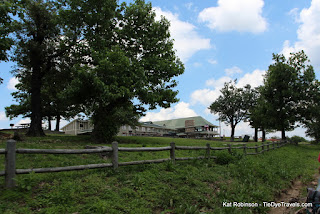 Queen Wilhelmina State Park to check out the new lodge? Feel free to take the drive, but remember – you can start staying there July 1st. Make your reservation soon – those rooms will go fast.

More photos and information on The Sideblog. 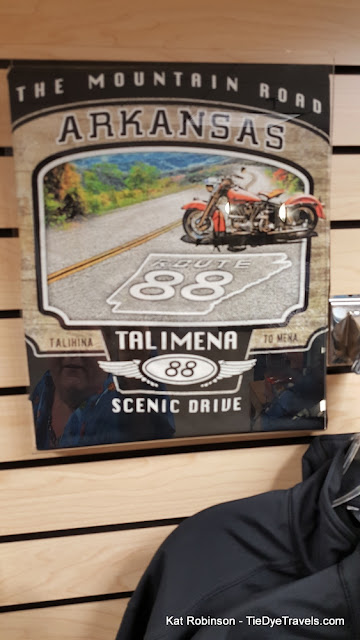 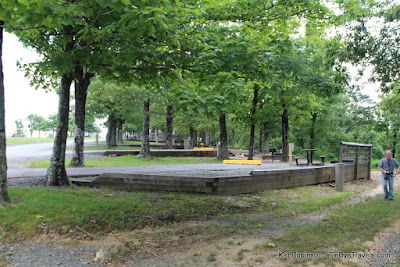