You Need To Try The Pie at Boo's Bulldog Diner. 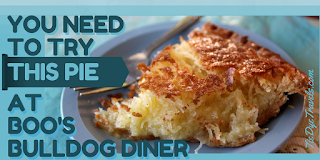 We've been doing a great deal of traveling in western Arkansas recently, searching out all sorts of good eats.  Our last stop before returning home this time came at a modest diner in downtown Greenwood, where we found a decent 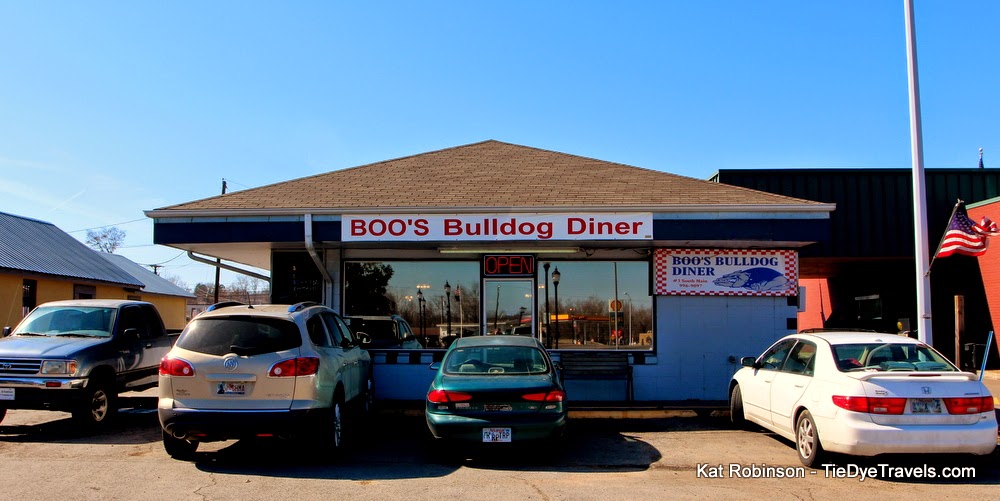 The Bulldog Diner has been around a little while in Greenwood, on the somewhat unusually shaped downtown square.  Boo Polk bought the place in 2013 and has added her touch to it.  That touch, I'm guessing, happens to be the pies.

But I'm getting ahead of myself. 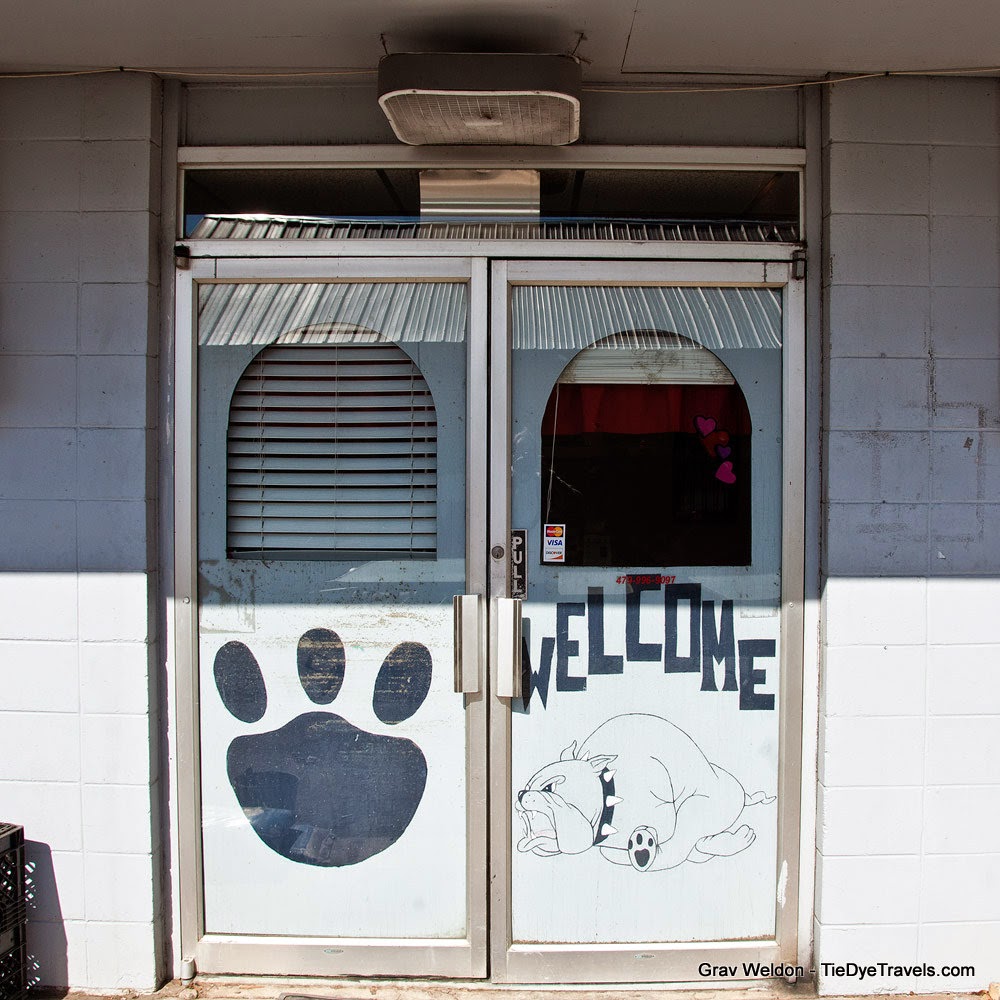 We were headed out of town and decided to grab a late lunch one Thursday afternoon.  We had seen the sign the day before and made a mental note to check it out.  So around one in the afternoon we pull up to where that sign was and proceeded around to the side of the building, where we went in. 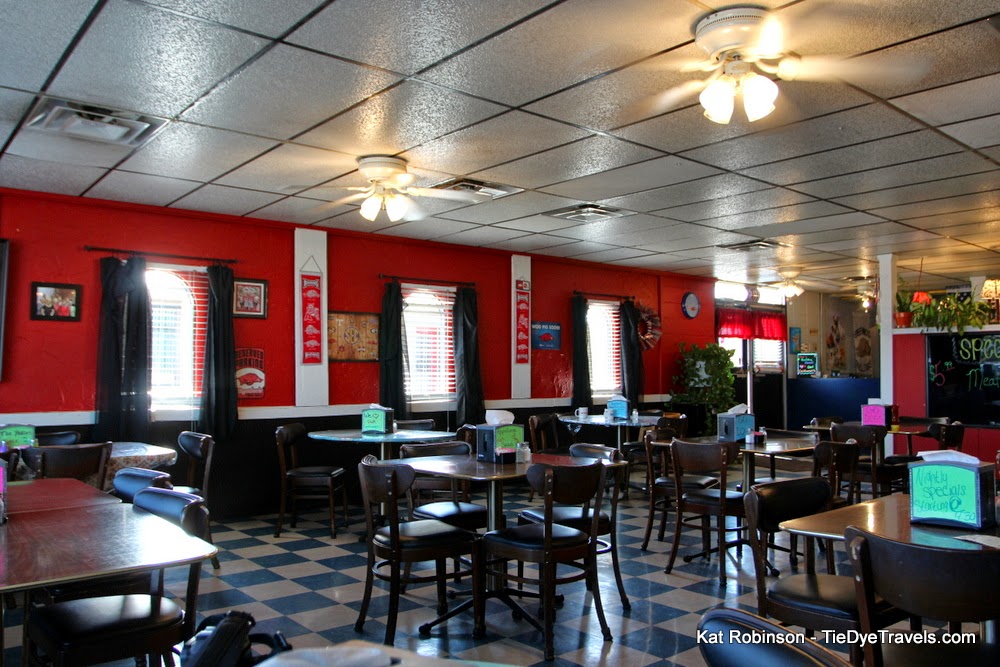 to enter from the side.  Get it?  All right.

The remnants of the lunch crowd were dining.  We were asked to find out own seat.  Our waitress brought us menus to look through while we got our bearings.  She was patient with us while we cleared our heads, ordered beverages and decided on some Texas toothpicks.  And we were patient when we discovered that the appetizer was unavailable.  So Grav jumped on the idea of fried pickles. 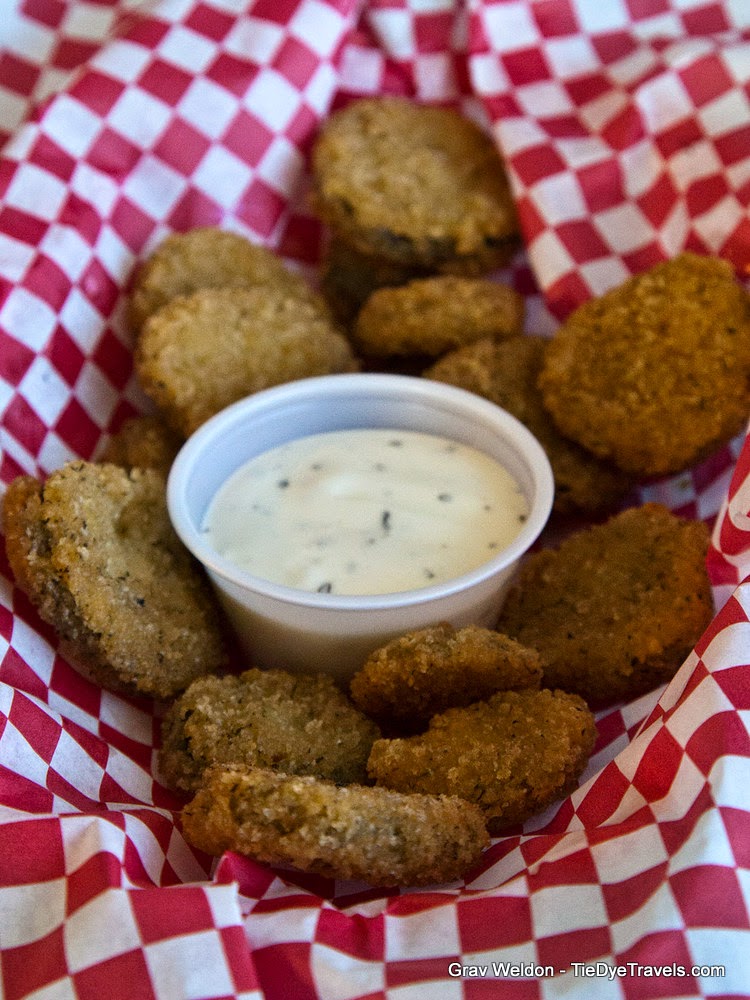 They came to the table breadcrumb-encrusted and with a healthy serving of ranch dressing.  Just sharp enough to the taste but still rather good.

And that's when the looking began.

I supposed metropolitan folks have gotten use to seeing people shoot their food with cameras and phones, but the idea seemed to be foreign to these Greenwood diners, who glanced at us and openly talked about what we were doing. 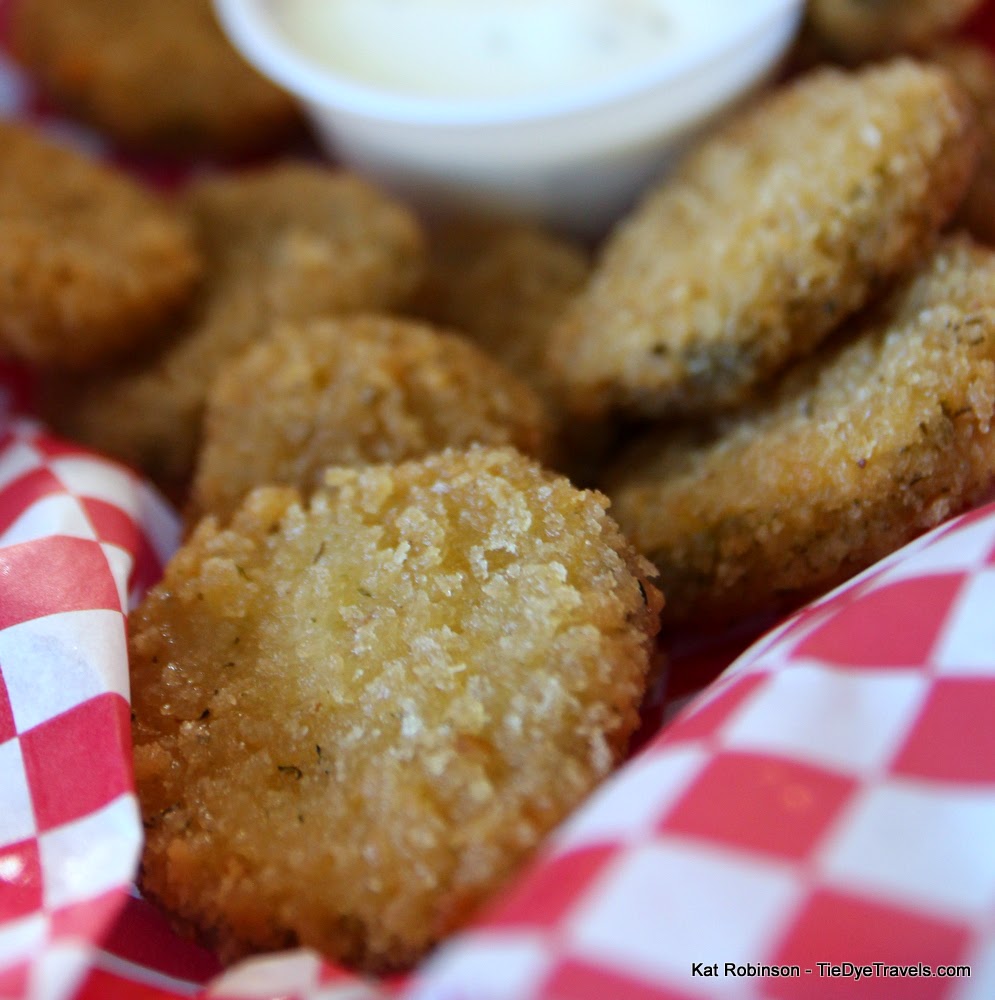 Our waitress answered more questions before putting in our orders the second go-round.  We weren't there too long before our lunches arrived.

And yes, even confronted with a menu full of burgers, salads and dinner plates, I went for... a chili dog.

Judge me if you wish, but every once in a while even I want a good sopping 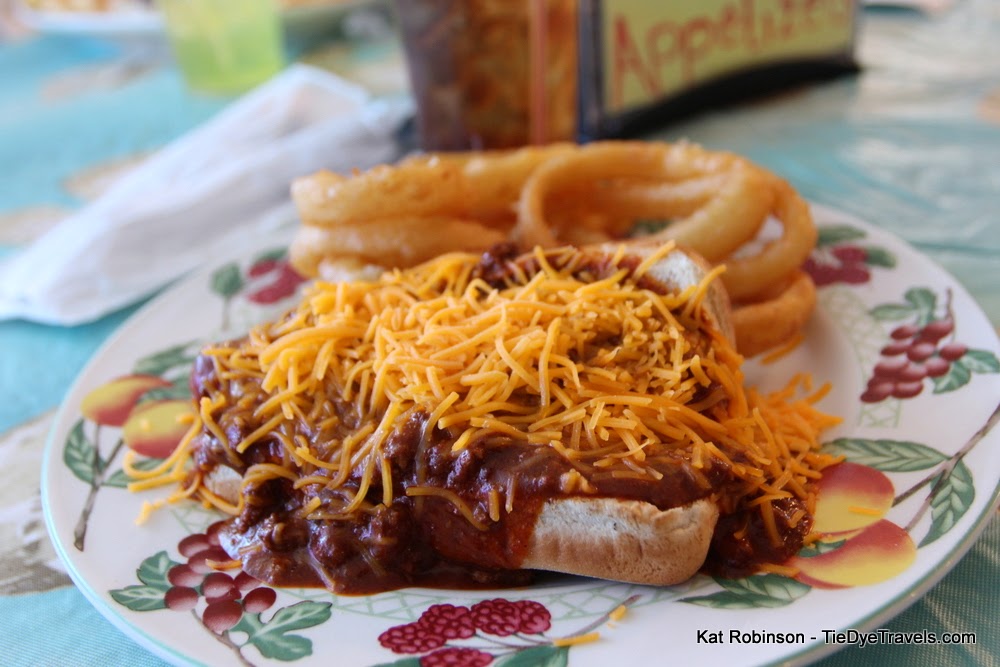 plate full of chili-swamped stuff, and this did it for me.  An all-beef weiner on a bun covered in chili and cheese.  That's right.  It was... well, what can a chili dog be?  It was all right.

And so were the onion rings, which I was bound to get one way or another. 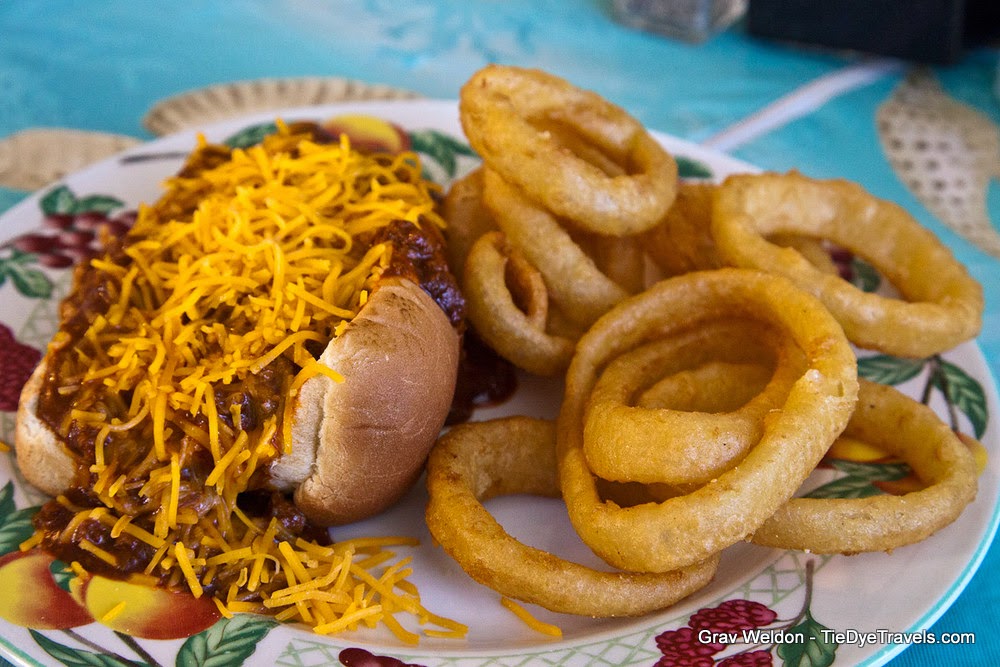 I was craving them.  Sadly, these weren't thick rings, just moderate ringlets in their batter.  Okay, I could totally do that.

By this point, no one was eating in the restaurant. Not that the food wasn't good, but the two tables of people who'd come in after we had were gawking at what we were doing, openly watching us switching plates and taking photos.  I noticed.  Grav noticed.  It's funny. 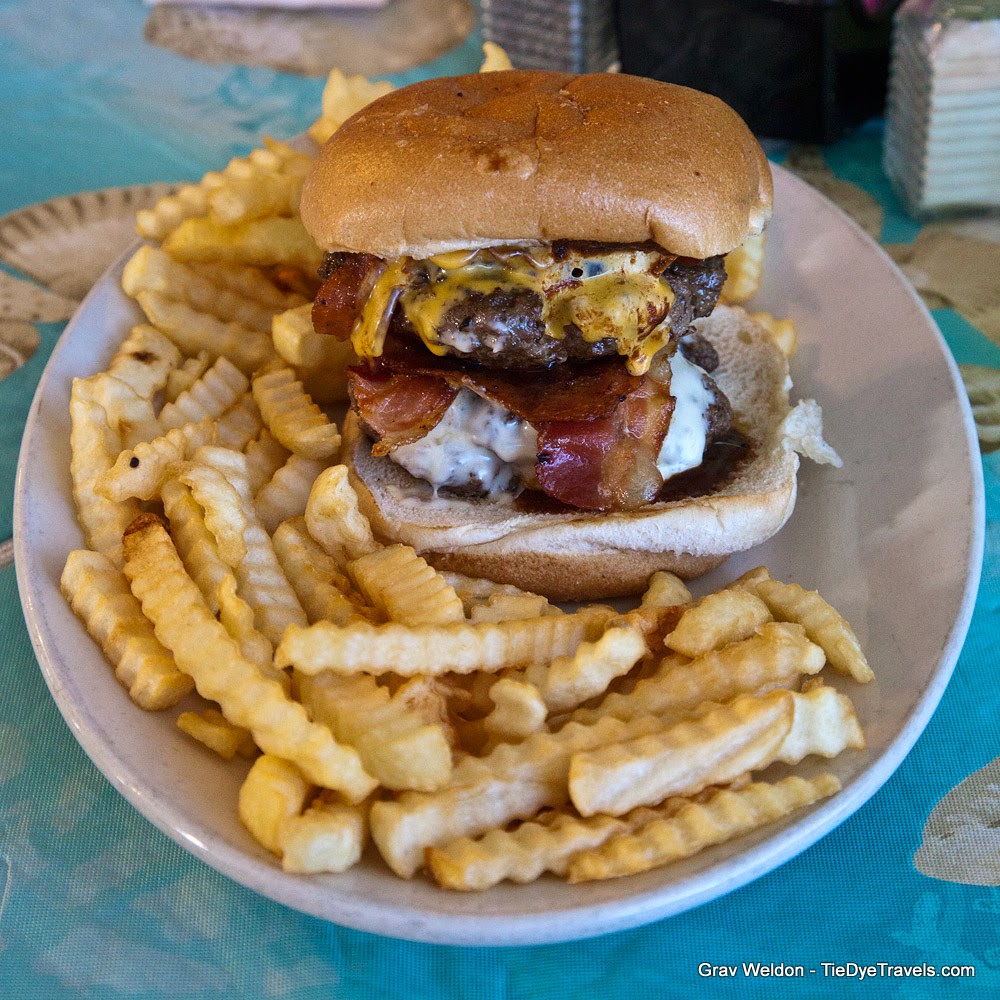 Grav, on the other hand, had gone for the epic, and from the moment I saw his burger I knew I had chosen poorly.  His burger was massive.  He had ordered the Big Daddy Burger, a double-patty burger with cheese and A1 sauce that comes with a double order of fries, and he had bacon added. And as you can see, this was the impressive result.  As far as double-patty burgers go, this one was pretty dang thick and 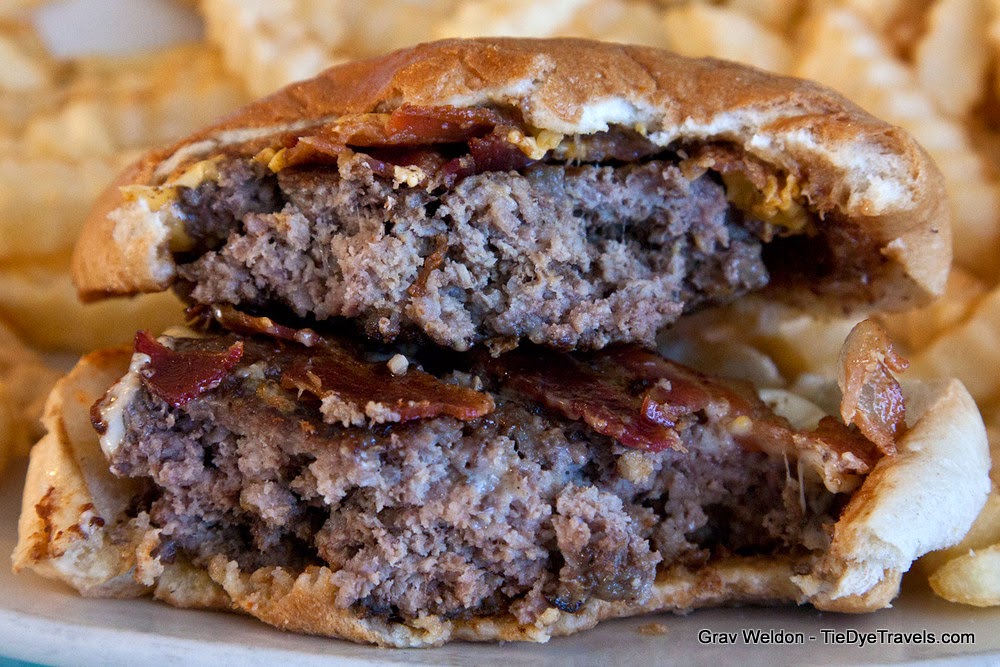 impressive.  It was low on spicing, but came with two different sorts of melty cheese and of course the bacon.  I dug the crinkly fries, though Grav said they weren't seasoned well enough for his taste.

That'd be enough to say hey, drop in and check out this restaurant.  But then we decided to try the pie. 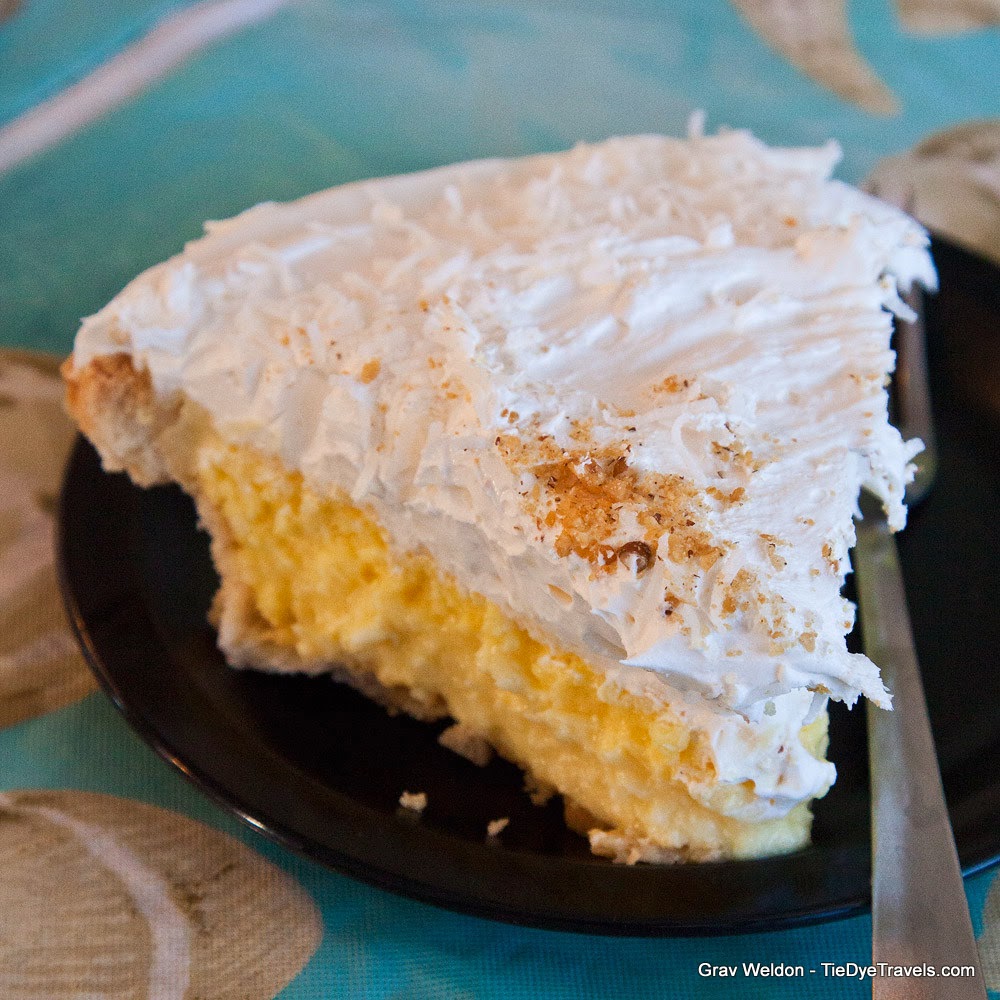 That changed the entire conversation.  Several varieties were offered, including chocolate pie... but we went for a couple of different choices.  We both wanted coconut, but got it in very different ways. 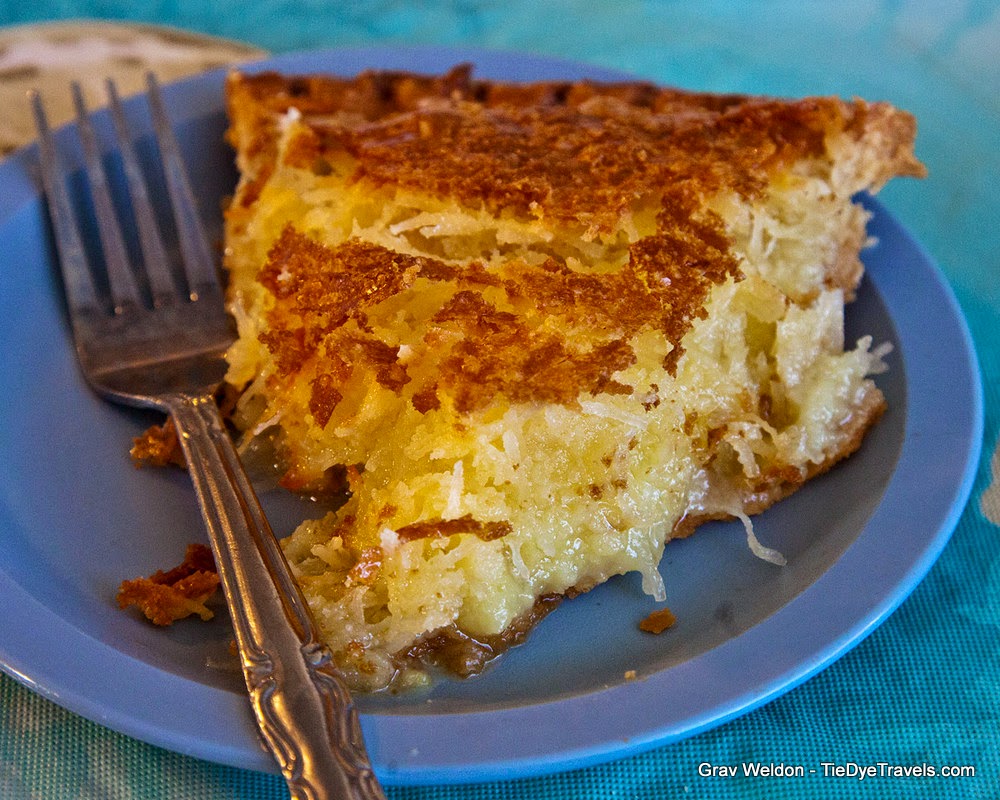 And it had absolutely nothing on my buttermilk pie.  You never really know what you're going to get with a buttermilk pie.  I've had everything from a glorified chess pie to lemon custard to a pineapple-rendered version, and it's always a bit of random what you get.  I should have guessed it'd be pretty good when the waitress 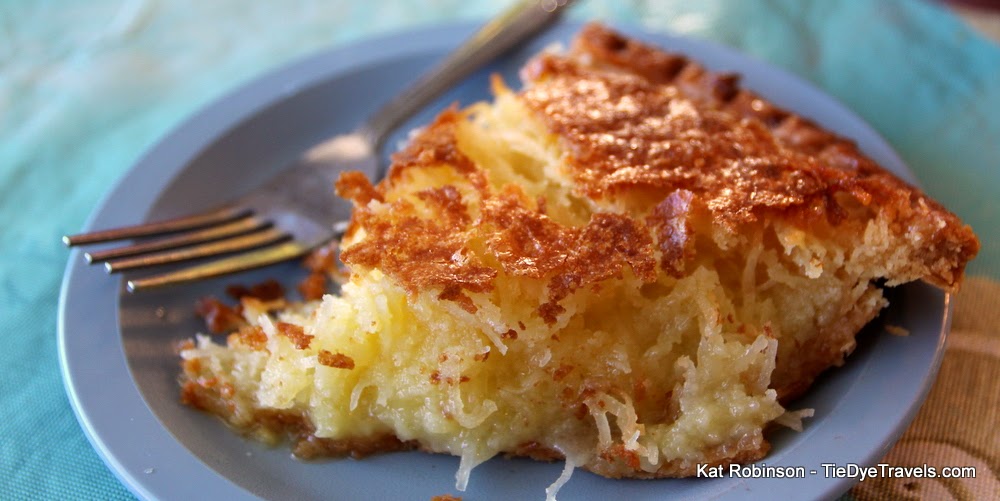 That made a good pie stupendous.

Think about it -- buttery coconut custard with the almost citrus ting of buttermilk in a homemade crust.  Can you think of anything that would be better? Anything?  I thought not. 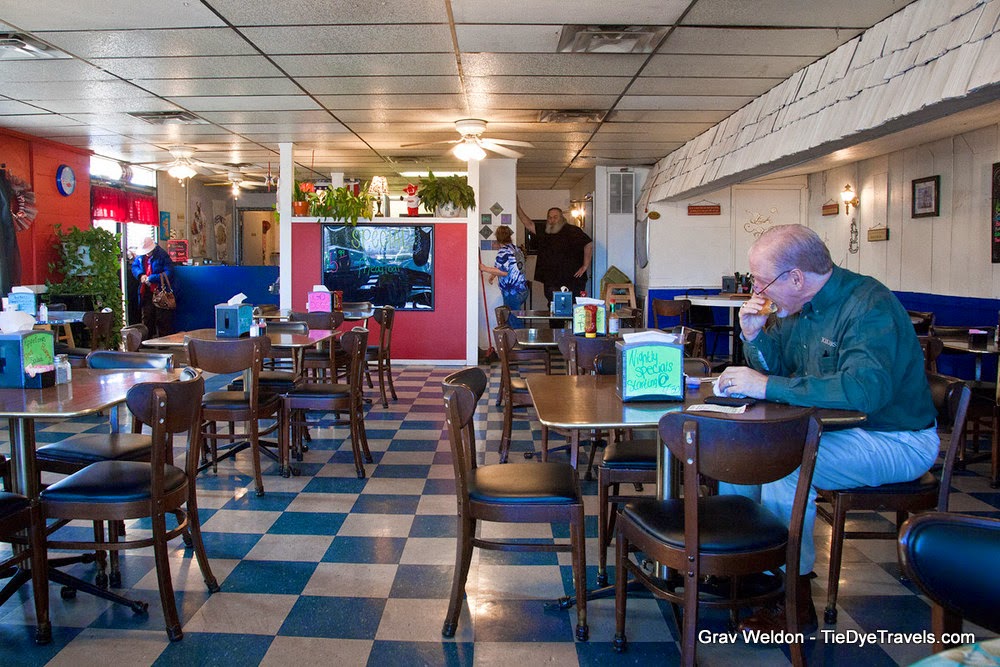 Even Grav had to admit, my pie was better, and that was saying a lot.  Both pies are definitely Arkansas Pie-worthy.

We'll probably return in a few months to try the dinners... which includes country fried steak and country pit ham.  For now, it's back on the road for us.  For you, here's a great place on Highway 10 in Greenwood to drop in on when you're in the area. 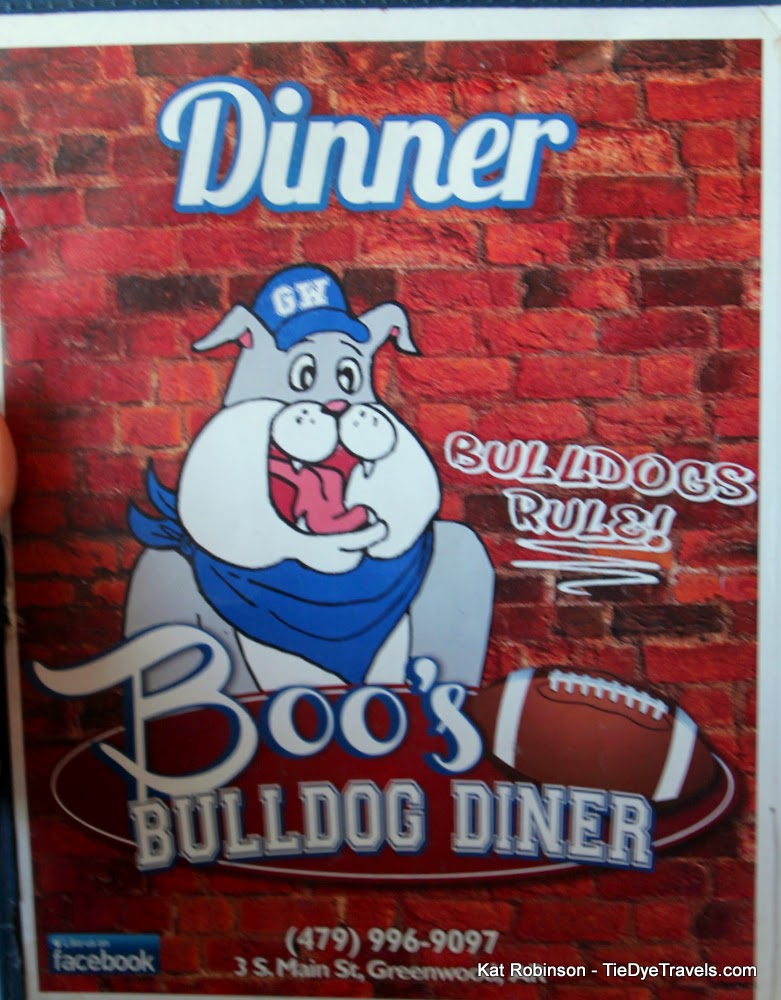 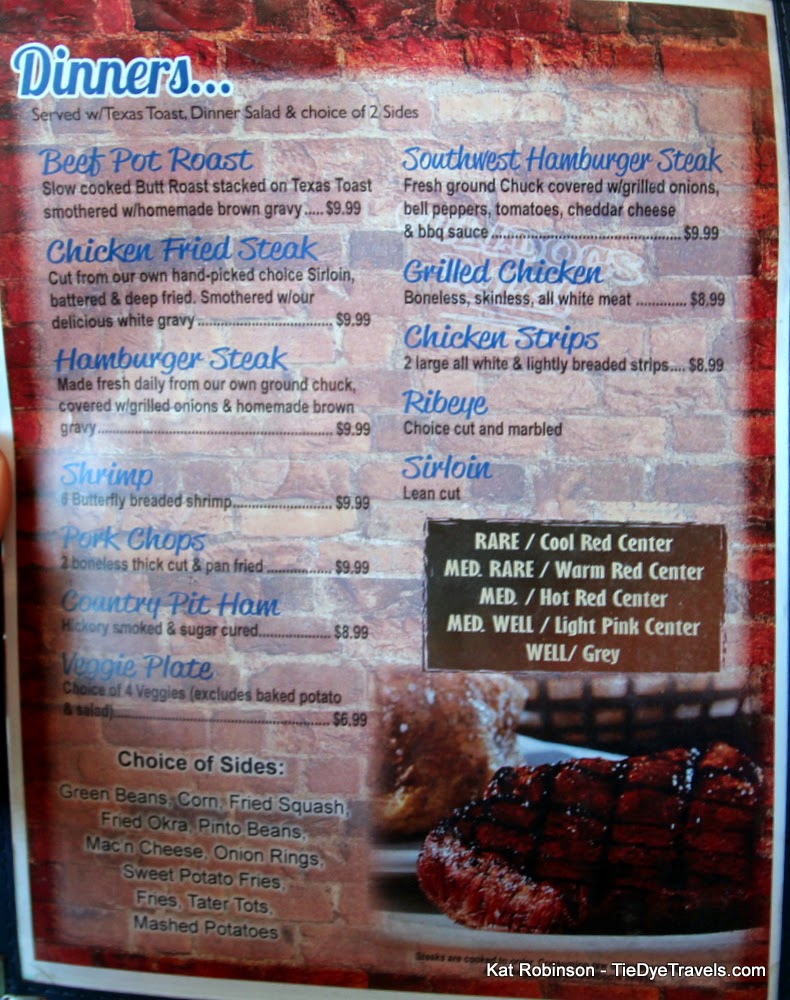 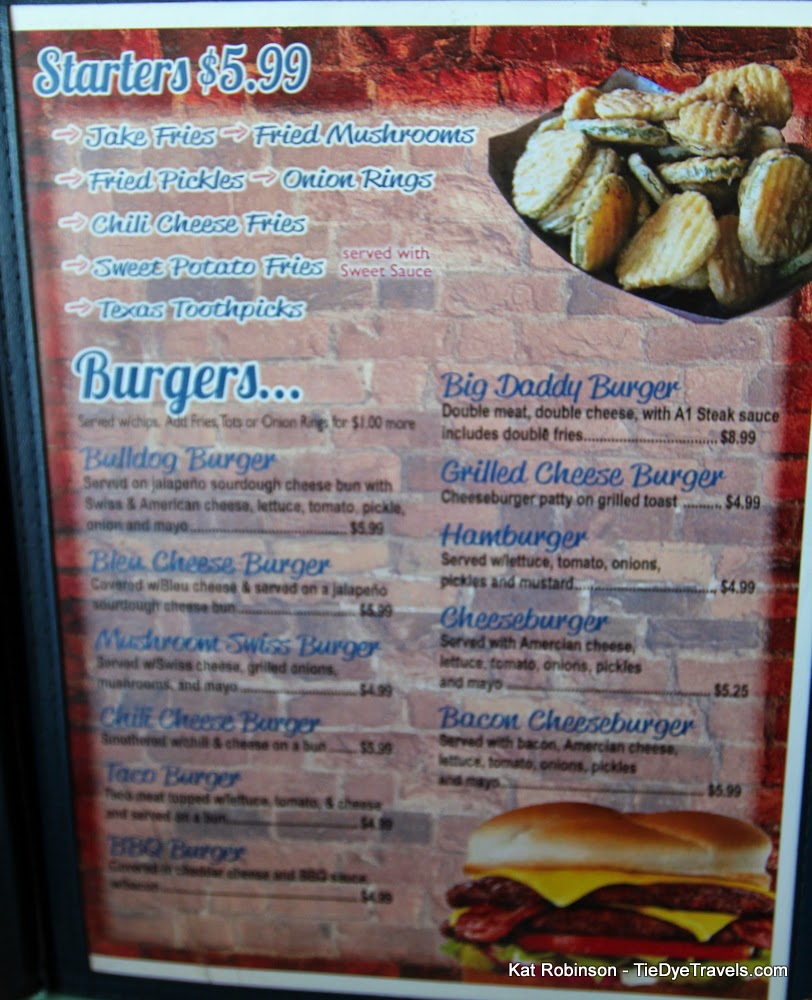 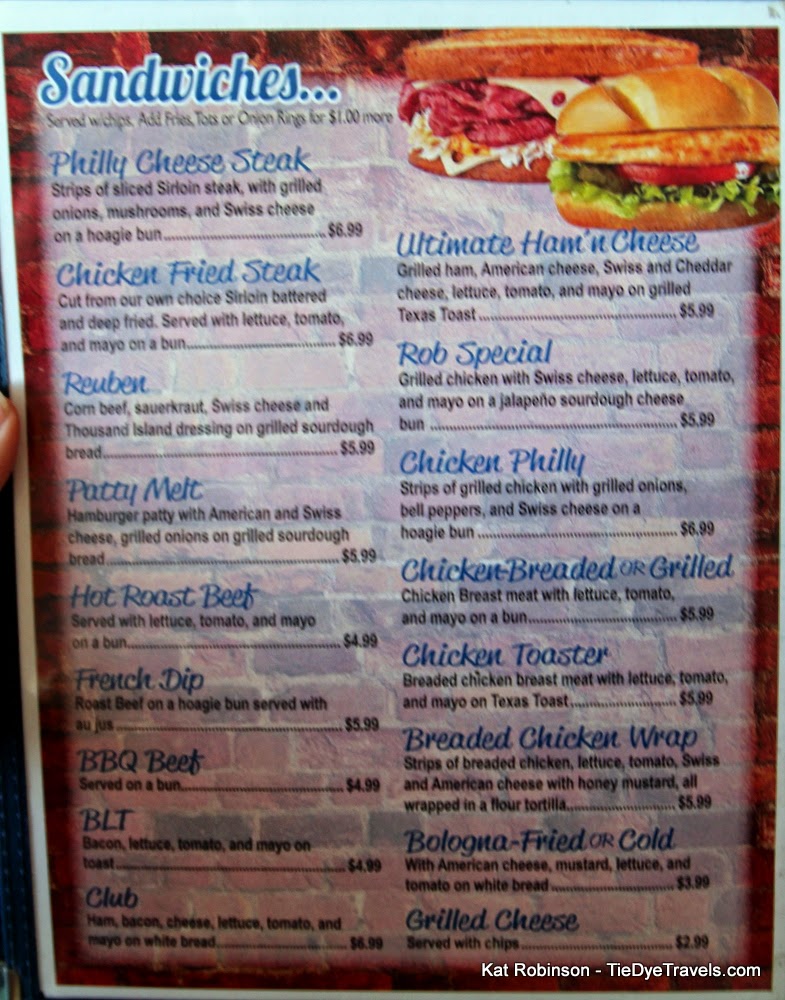 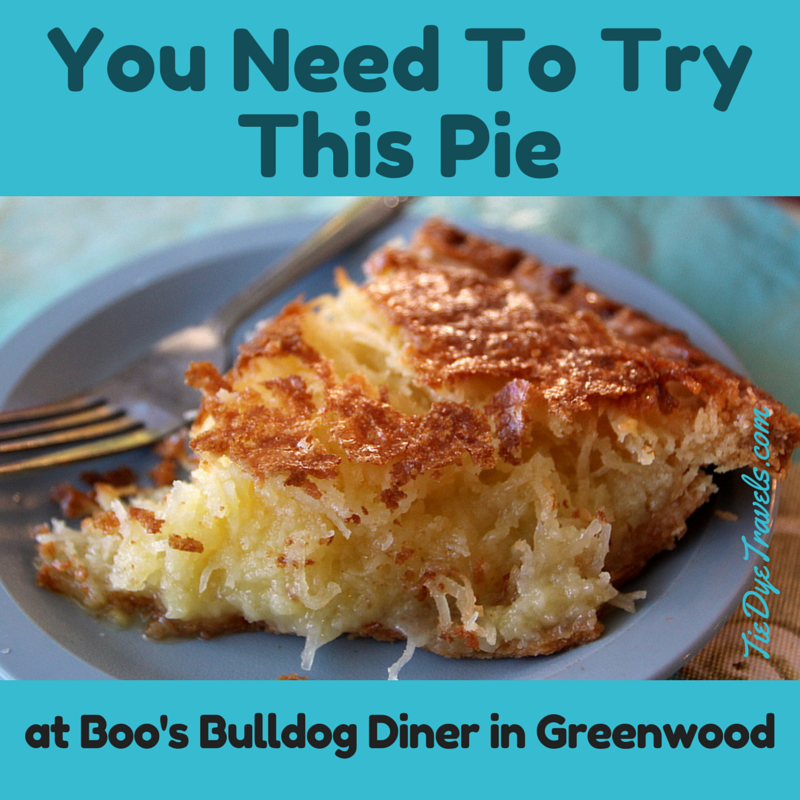 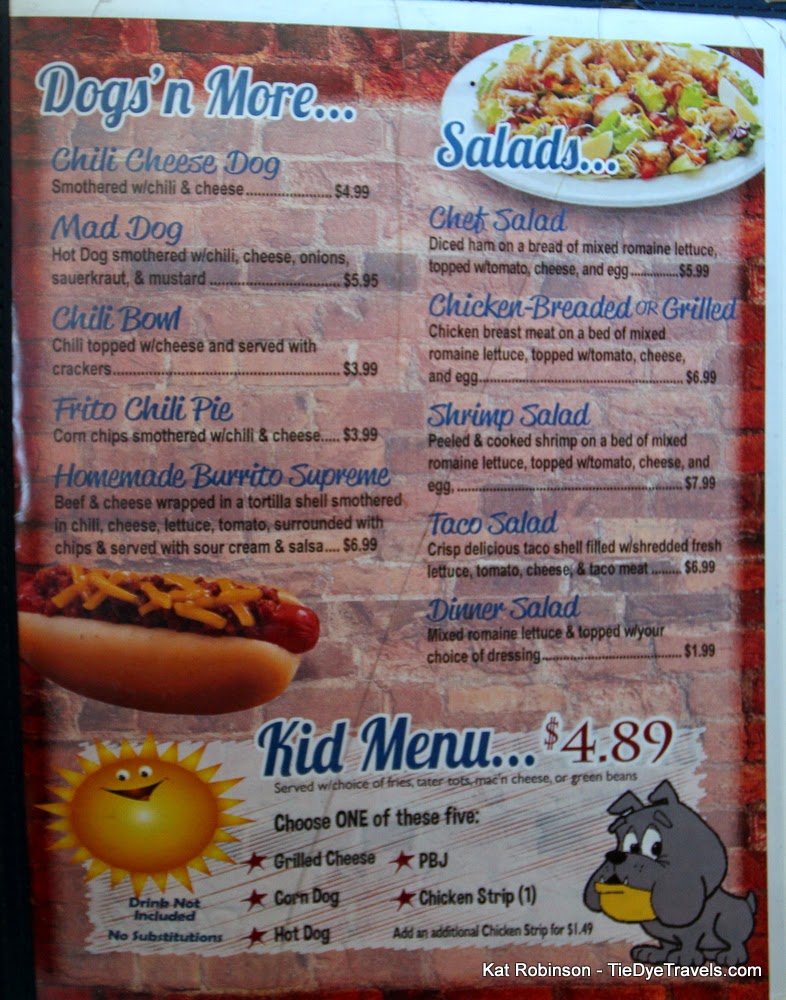 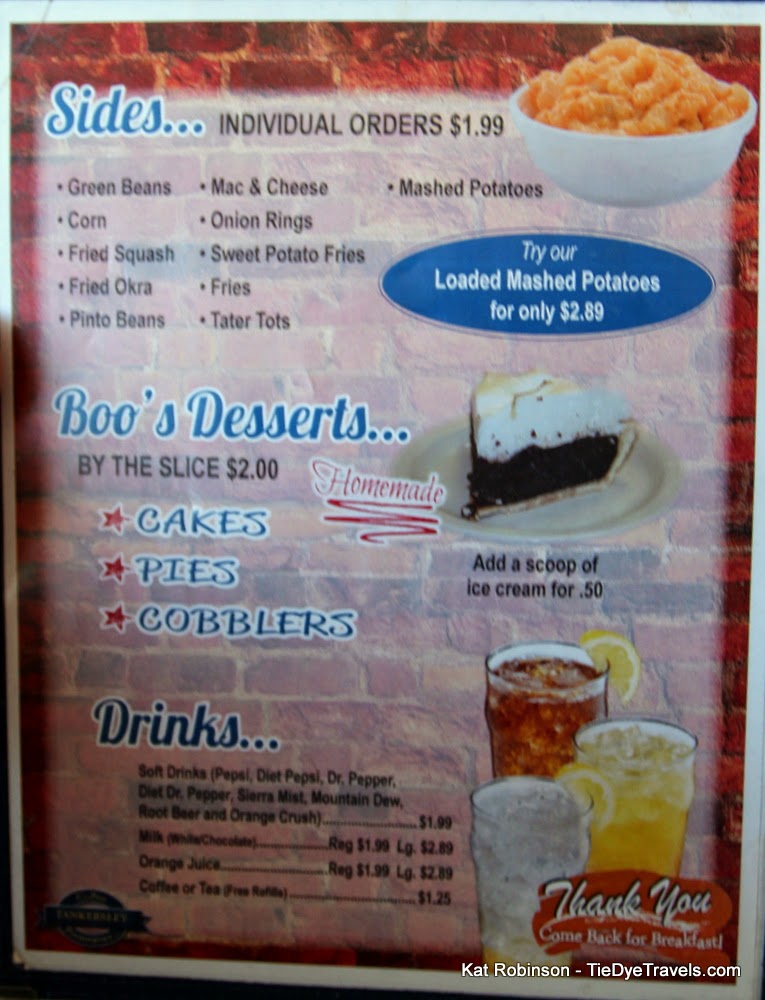