El Zarape is Winning at Mexican Food in Fort Smith. 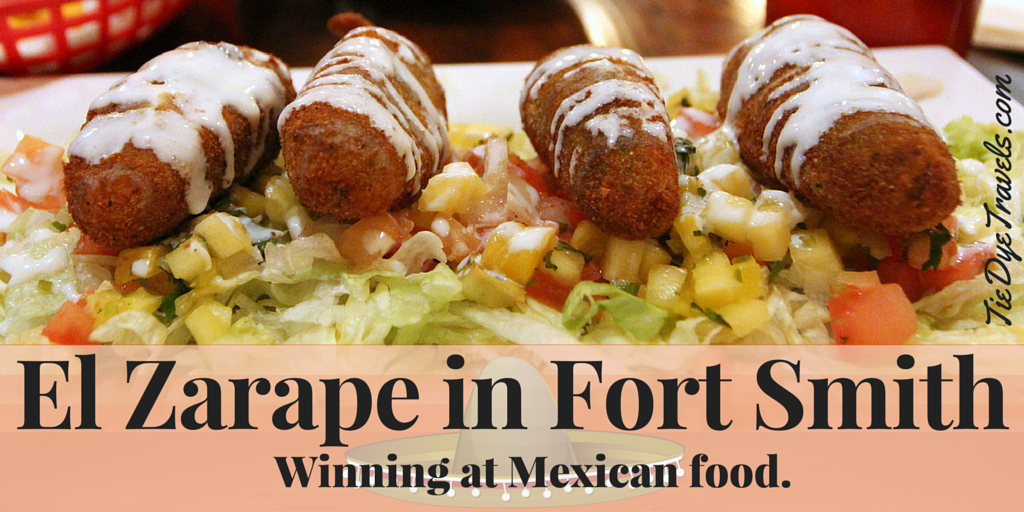 You can't swing a cat without striking a Mexican restaurant in Arkansas.  From our earliest years, Ark-Mex food has been prevalent in our state.  Even before cheese dip, creations of beans, tortillas and meat were cheap to make and easy to sell.  Fad foods such as nachos and taco salads in the 70s and 80s only secured the flavors of tomatoes, jalapenos and even cilantro in our collective palate.

With an influx of Mexican nationals and immigrants through the 80s, 90s and into the 21st century, a second wave of Mexican cuisine has crashed over our state.  These authentic flavors and family-tradition recipes have given a completely separate crop of flavors hold here in Arkansas.

But still, there is a certain camp of folks who believe there's little to no difference between the tortillas, fajitas and quesos from one Mexican restaurant to another.  For those folks, I challenge them to try El Zarape in Fort Smith. 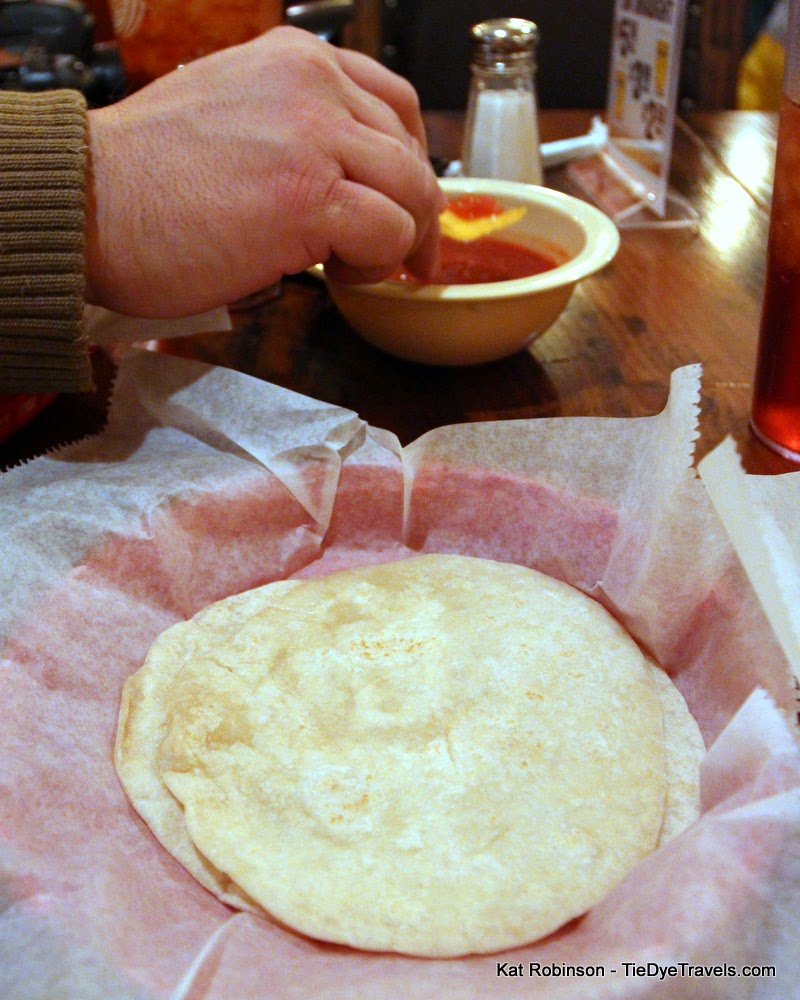 The gorgeous stone-fronted facade along Rogers Avenue gives way to a warm interior full of wood, stone and bright colors, without the garish attitude of less sophisticated latin-influenced restaurants.  It was enough to warm us from the cold, snow-driving day Grav and I had already encountered.  We sat in rather comfortable leather-padded wooden chairs and dug through the menu while Grav sampled the salsa with the offered deep yellow corn tortilla chips. 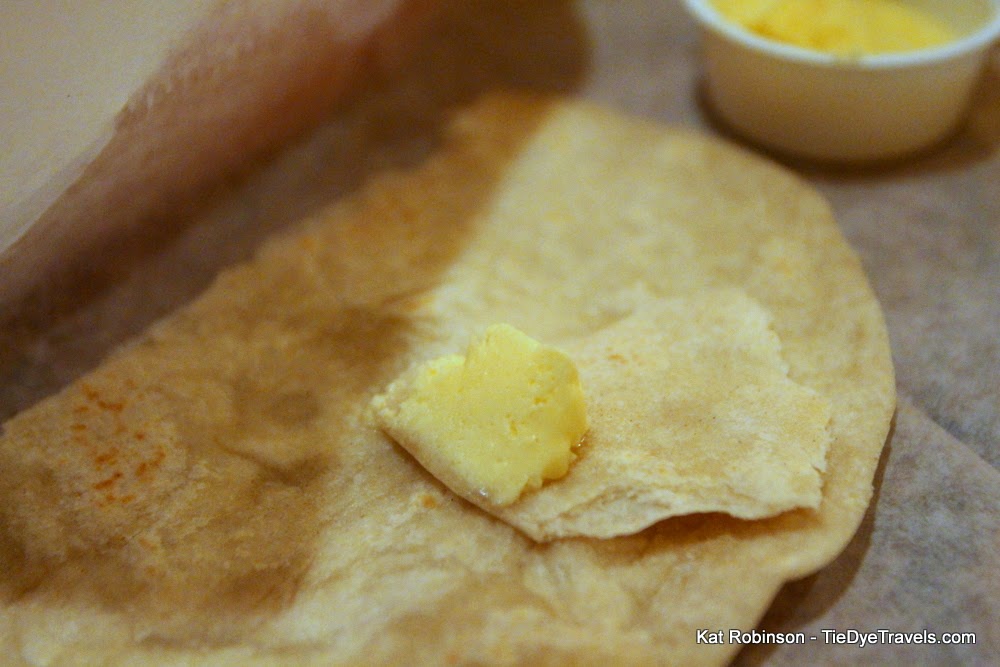 waiters passing by brought us a couple of hot tortillas straight off the conveyor with some Country Crock honey spread.  Soft, pliant, almost too hot to handle at first, these were decadently velvet-like and perfect dipping in the salsa.  I also tried it with the Country Crock.  It was

We decided to begin with an appetizer and settled on stuffed jalapenos.  These four bombs arrived at our table on a bed of mango-jicama slaw, 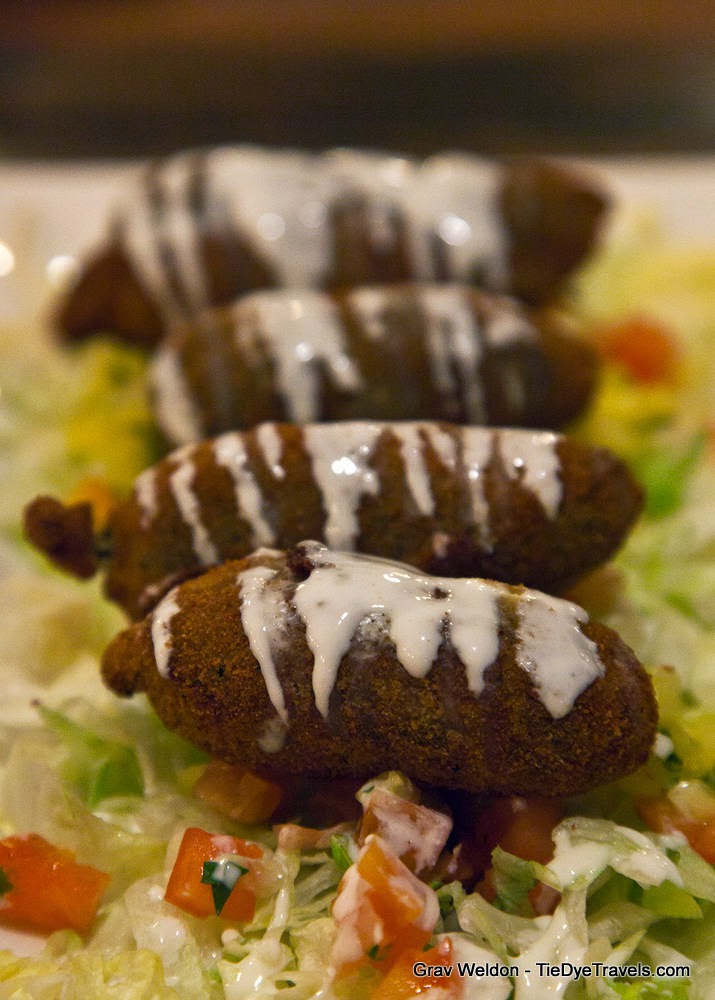 perched horizontally with a light drizzle of crema on top.  Grav bit into one and immediately went for the water, his face flushed.  I tried one and immediately sensed great savory flavors in the chicken and cheese within, followed by a punch of jalapeno fragrance that went right to my nose.  It was heady and immediate. 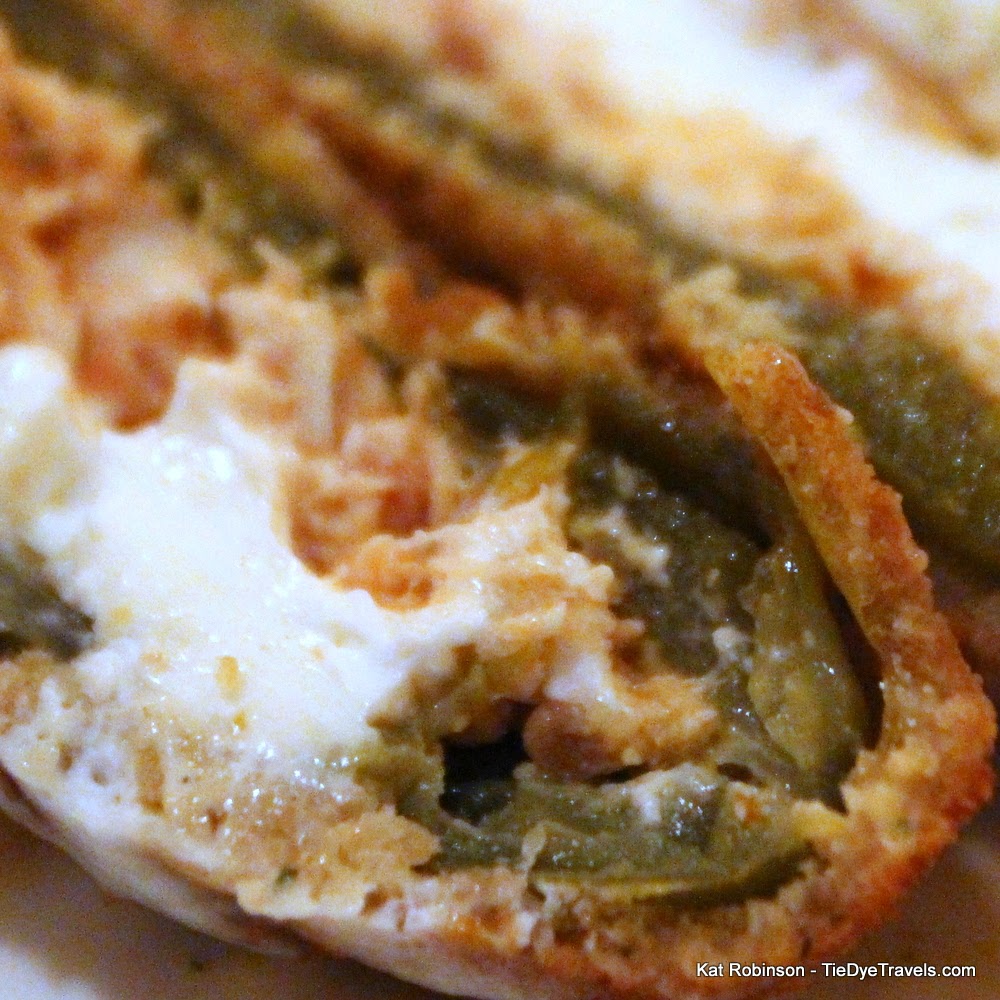 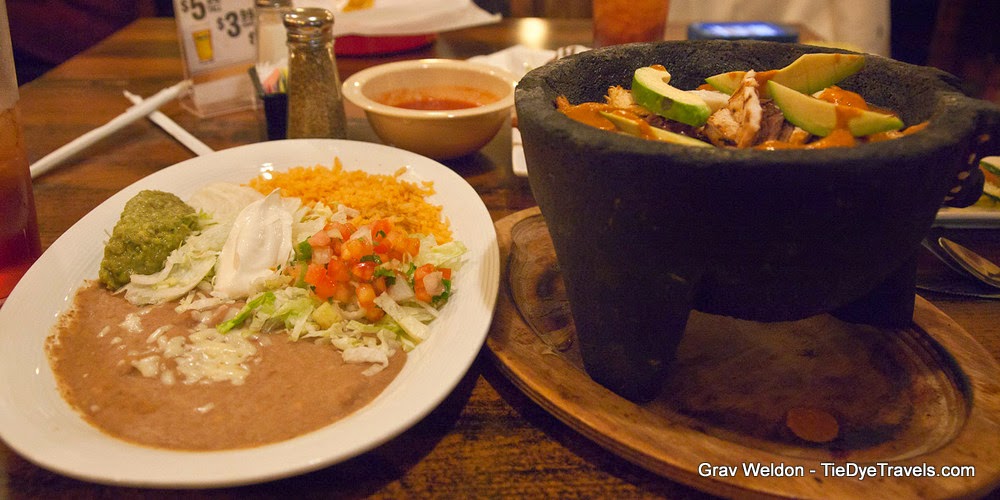 And without another moment to spare, our plates were delivered to the table.  Grav's latest obsession has been with the molcajete, and El Zarape's version was absolutely grand and deceptively simple.  Unlike 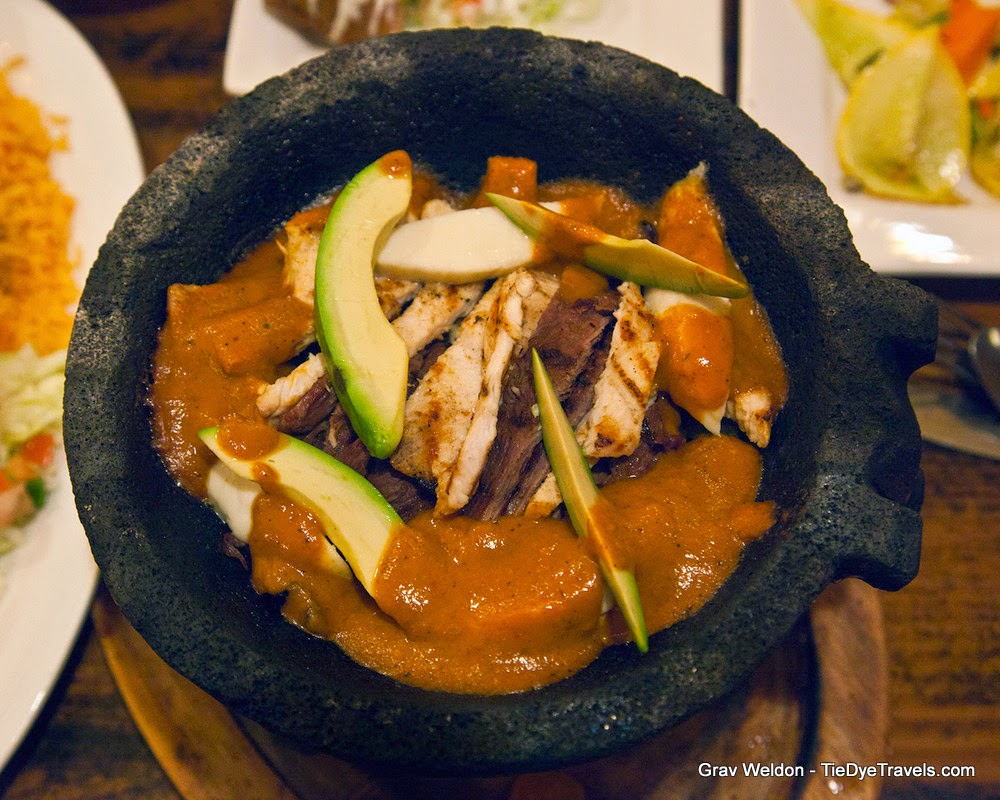 versions he's encountered at Cantina Cinco de Mayo and Santo Coyote in Little Rock recently, this was very light -- nicely grilled strips of steak and chicken along with cactus, peppers and onions and slices of queso fresco along with wedges of fresh avocado, lightly slathered in a chipotle pepper sauce.  That sauce brought everything together nicely 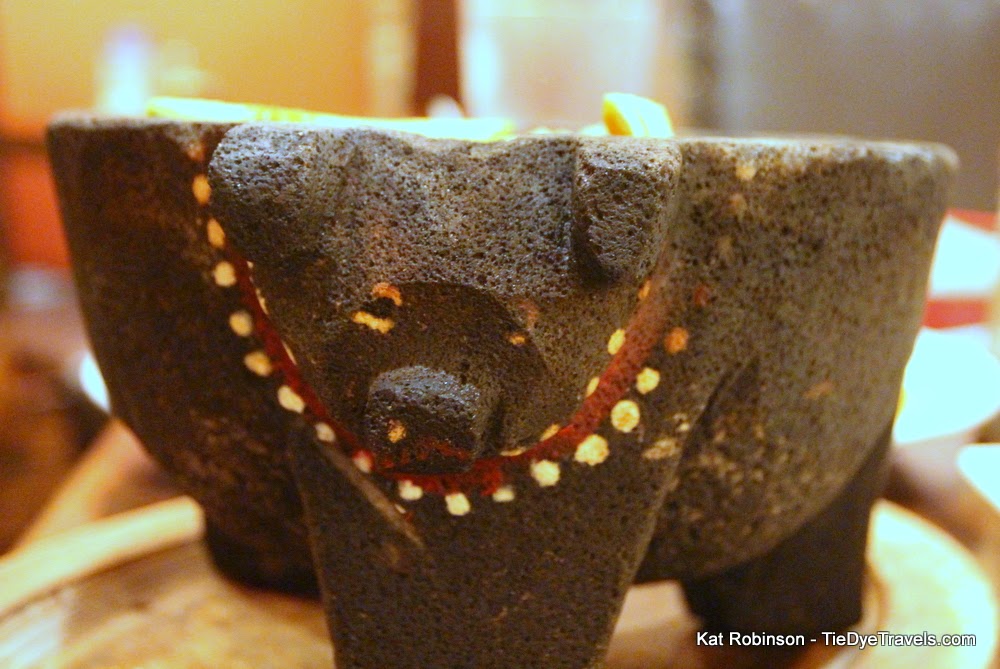 with a rich and deep heat.  A side plate of beans and rice, lettuce, pico de gallo and sour cream accompanied, along with more of the fresh, hot tortillas.

I had dithered with the idea of a chile relleno stuffed with ground beef, 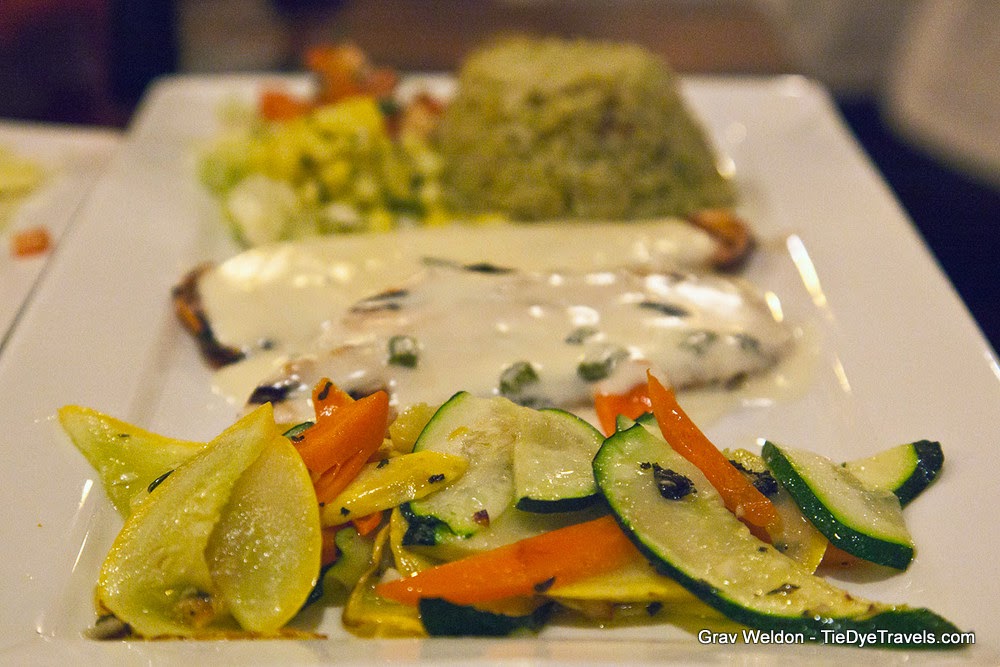 but had gone with Grav's suggestion of the Chicken Poblano instead, and I could not have been more pleased.  This deceptively austere place came to my table, two large grilled chicken breast slices under a white sauce, slices of zucchini and squash and carrots sauteed in butter to the left, a form of

cilantro rice and pineapple pico de gallo over lettuce to the right. Each element stood on its own, 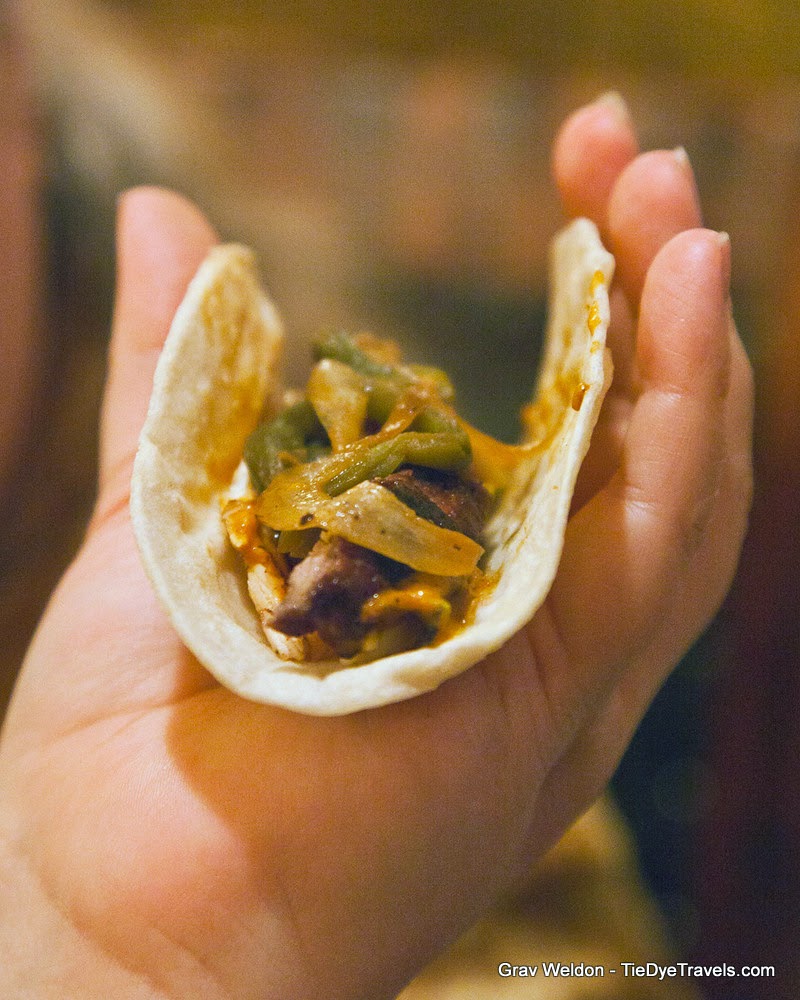 especially the smoky grilled chicken against the velvety-smooth poblano-infused wine and cream sauce, a great counterpoint of char and mellow.  The fresh vegetables were irresistible to me (I can eat my weight in zucchini), the cilantro rice was comforting and the bright flavor of the pineapple pico completed an excellent dance.

We dithered again over dessert.  I saw sopapillas on the menu, which I adore but Grav does not... I also noted the pecan cheesecake, which I knew he'd go for.  We first settled on sharing a flan, but after hearing 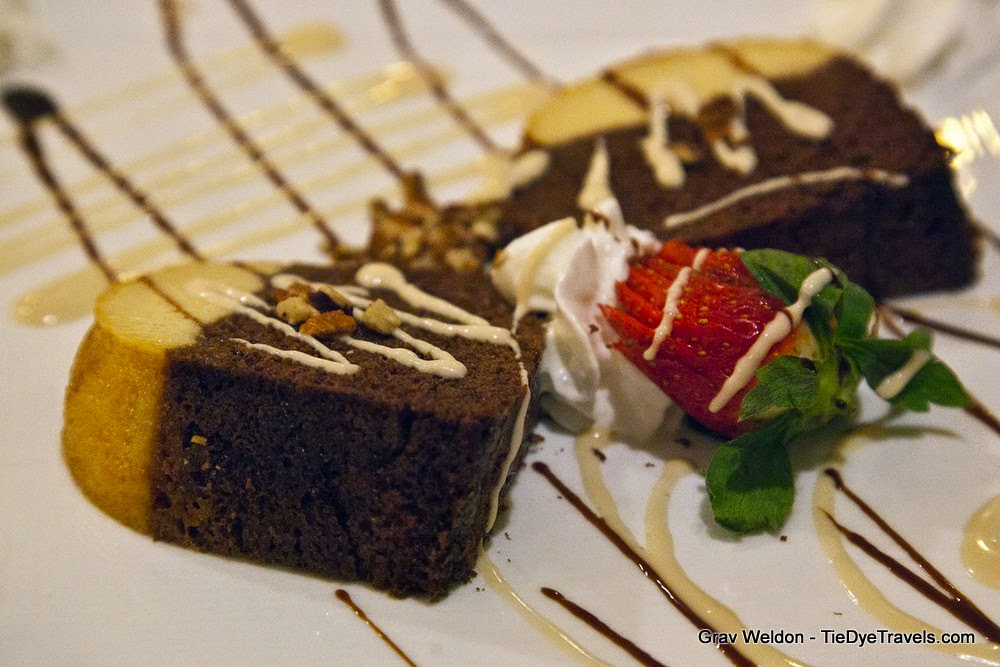 all about the Tres Leches we decided to go for... well, strangely enough, the chocolate flan. I expected the round custard, but instead we were brought a rich custardy chocolate creation that reminded me more of cake.  Not that I minded.  The gorgeous presentation was 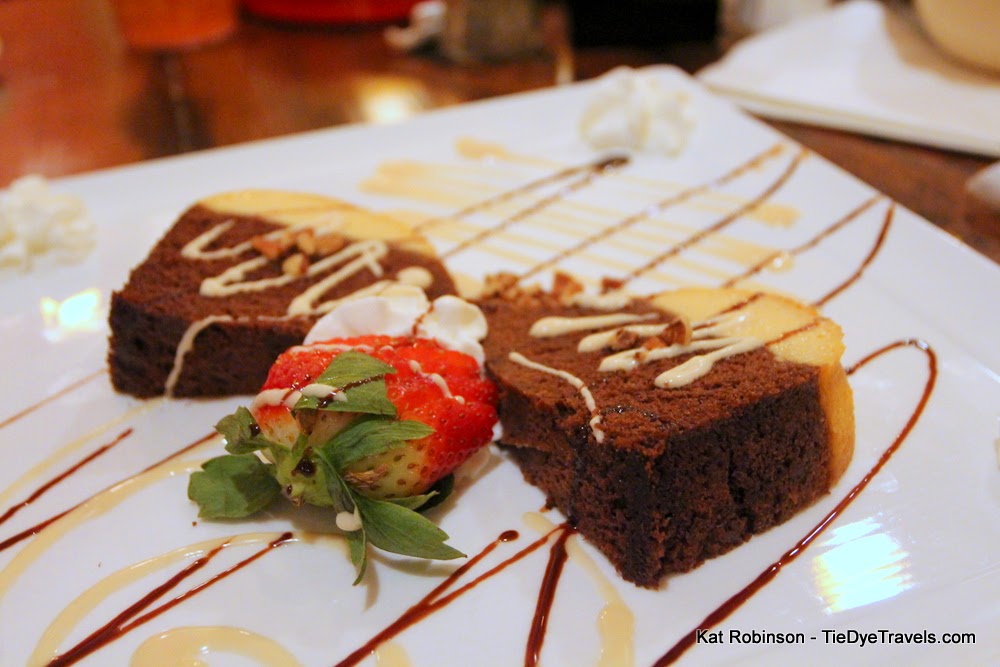 no match for the lush but light texture of the pastry, and we found ourselves knocking spoons for the last bite.

All the time we were there, we were attended to.  One of our waters, Eduardo, insisted we had to come back again... to bring some of Grav's smoked meats in for him to try.  Others provided us with questions, containers and attention... far more than we're used to receiving.

El Zarape could be overlooked easily, considering the multitide of both authentic Mexican, Tex Mex and Ark Mex offerings in Fort Smith.  But it shouldn't be.  It should be cherished.

Now, you've seen our photos.  You really need to go to this Facebook album and see the photos El Zarape has of many of its menu items.  It's rare to see a restaurant doing great food photography like this, especially at El Zarape's low price point. 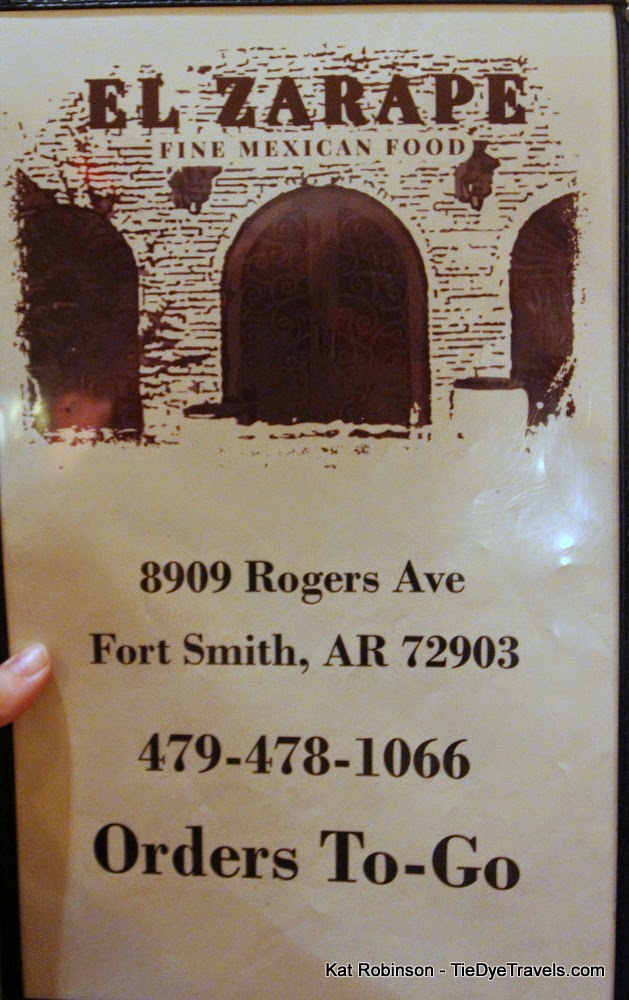 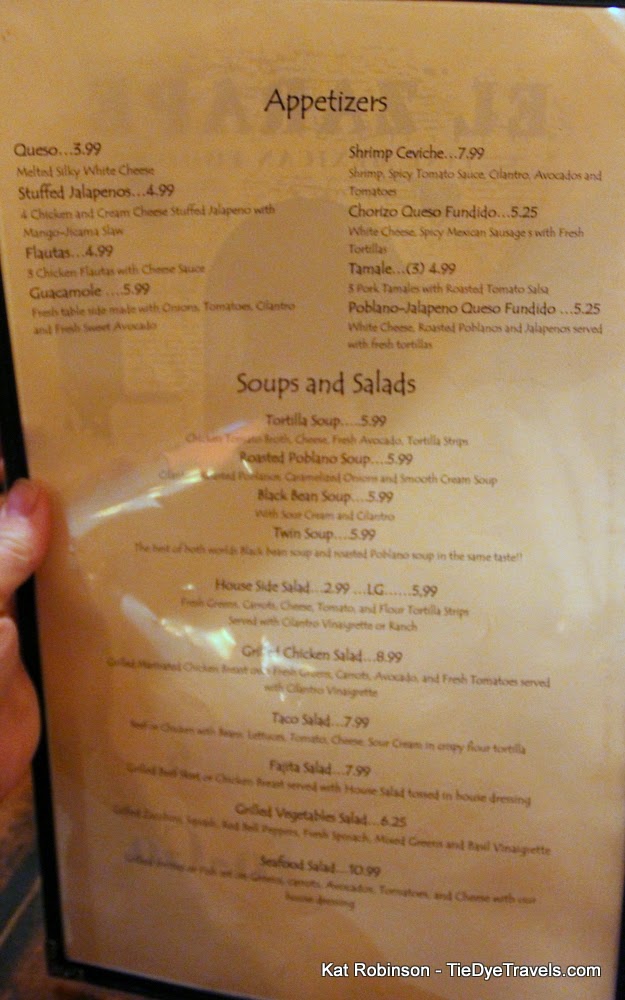 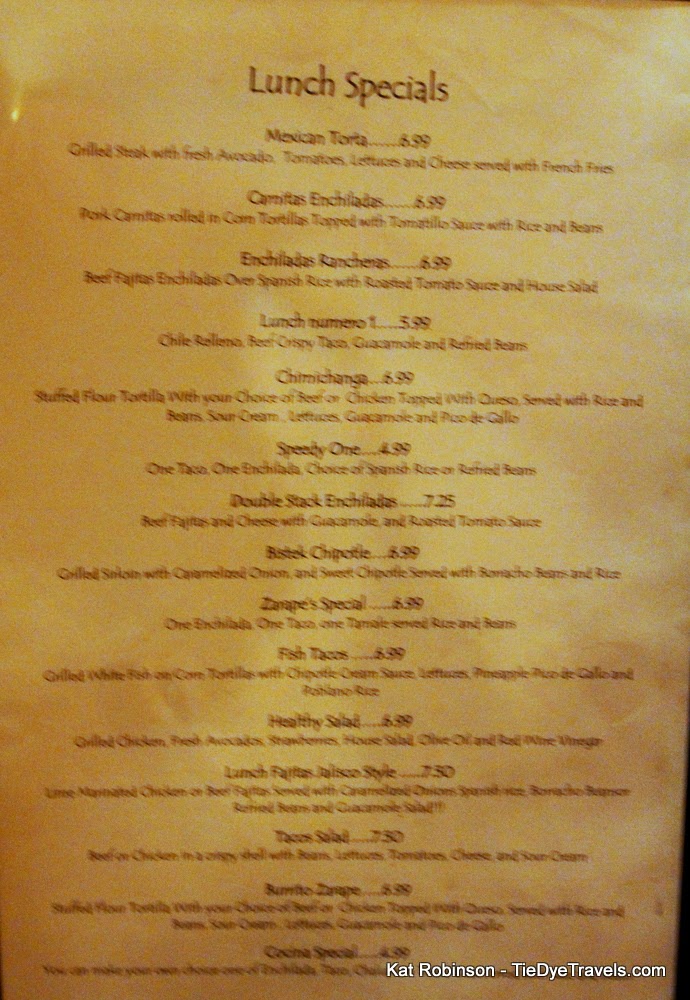 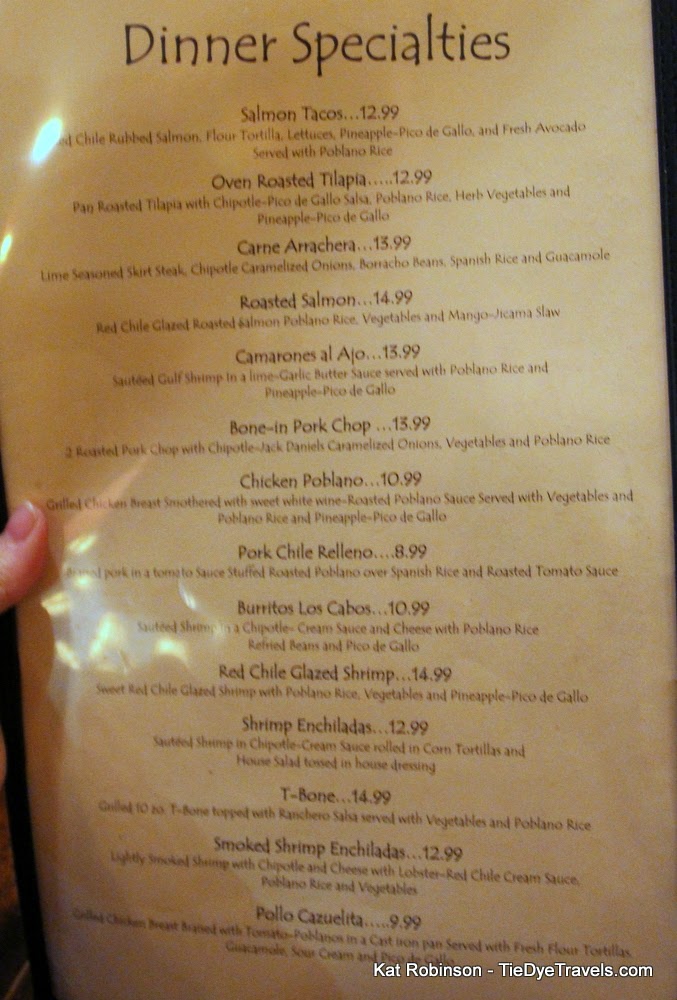 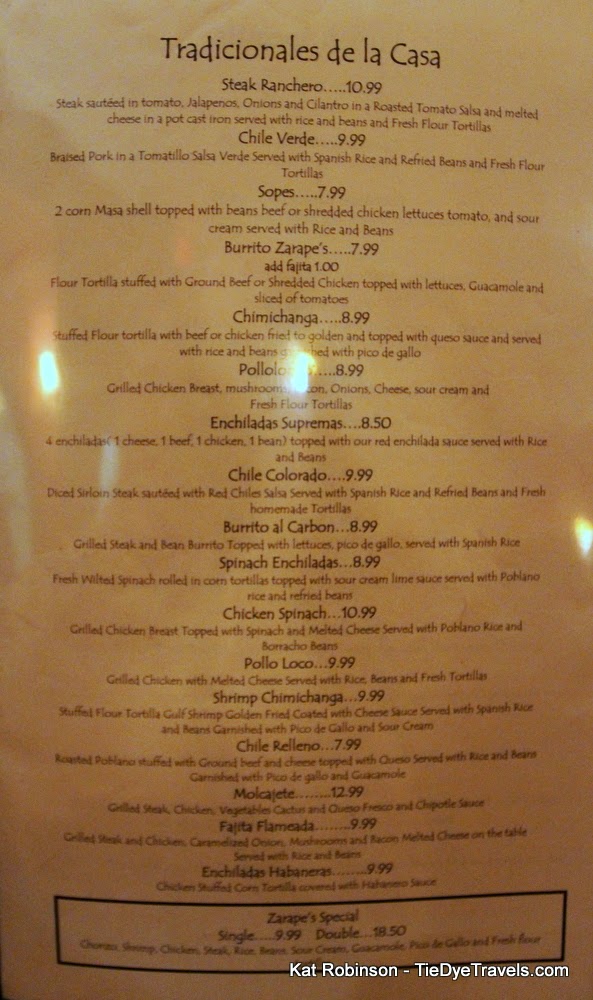 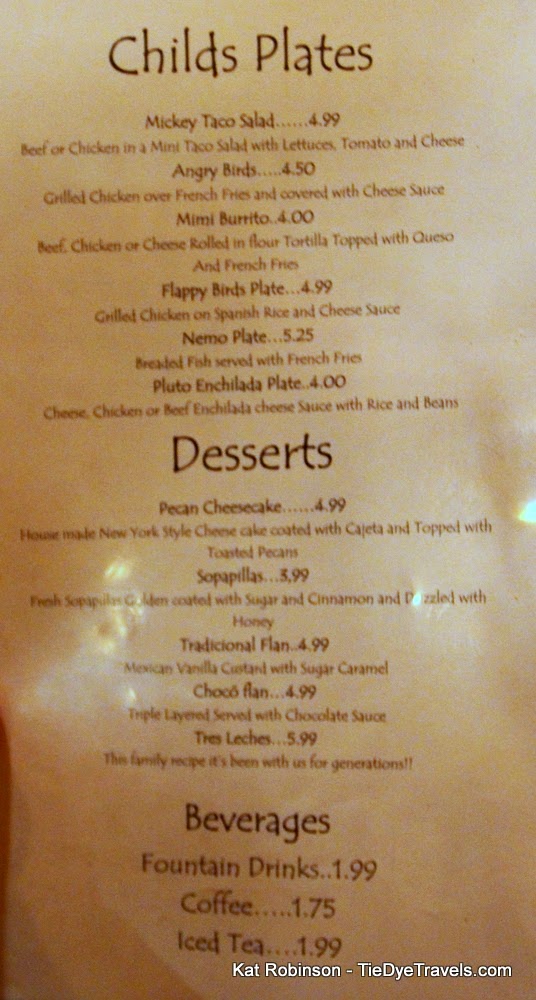 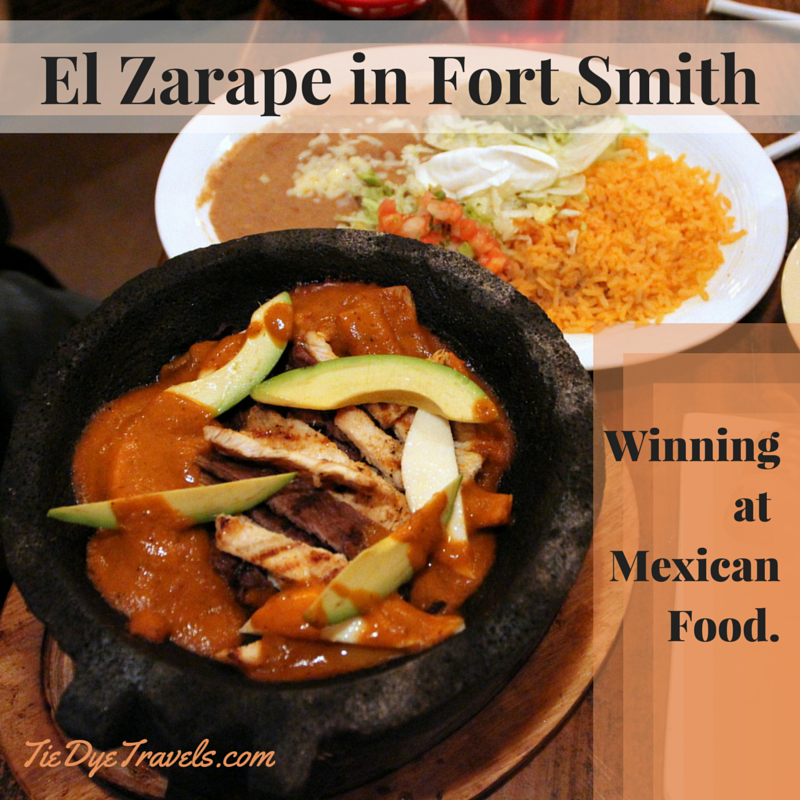