You Should Eat Breakfast at Sweet & Savory Cafe in Eureka Springs. 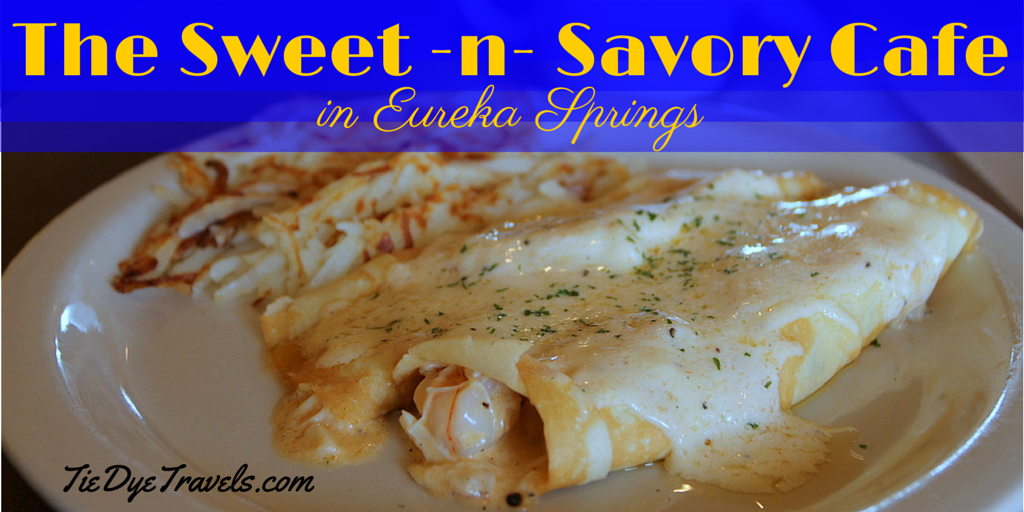 Eureka Springs is dotted with great restaurants, and with good cause. Though just 2000 people call the tiny Ozark burg their permanent home, around 100 restaurants manage to make ends meet and serve up delicious food with great regularity.

In the winter, though, many of those eateries close their doors and darken their windows.  After all, while the town quadruples and even quintuples in size during the late spring, summer and autumn months, January and February are considered a dead time (with the exception of Valentine's Day weekend) and there's not enough business to sustain them all. 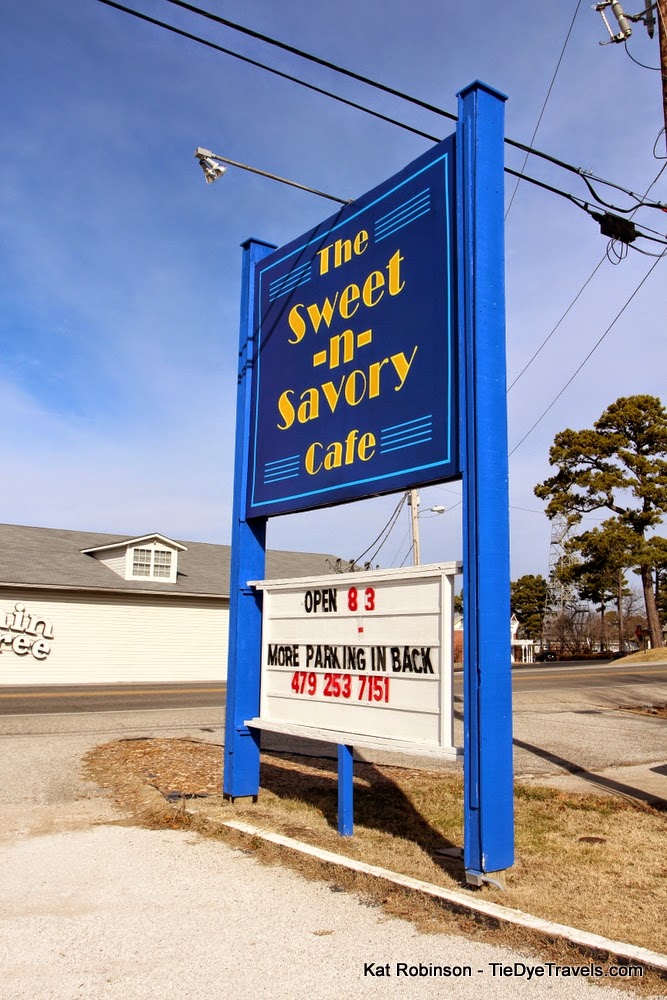 Fortunately for locals and breakfast lovers alike, there's the Sweet -n- Savory Cafe. This new establishment, which threw open its doors in April 2014, serves up breakfasts and lunches at a reasonable price.  But don't let the typical diner-style attributes fool you -- Sweet -n- Savory Cafe is on the level of marvelosity you'd expect from a Eureka Springs dining establishment.

Before I go further, I should let you know that this is only half the review I intended. We so enjoyed our late morning repast a week ago that we made plans for a return visit to sample lunch.  Mother Nature intervened, dropped an inch of ice and five inches of snow on us and the Sweet and Savory Cafe wasn't open the day we had planned our return.  We will return. 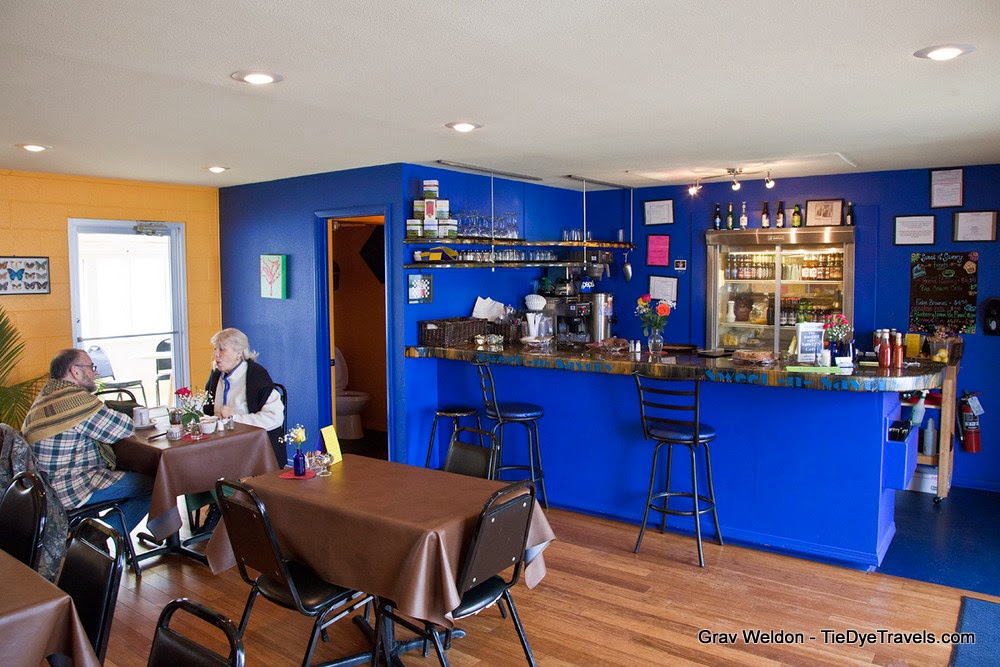 Grav and I dropped in on a Friday morning to find a busy crowd within the restaurant's yellow-painted walls.  Bold locally-produced art was evident, and we were ushered to a table in the restaurant's eastward room, right next to a standing portable heater that was a blessing.  It was rather cold.

From the first glance at the menu, we were stunned.  We sometimes nod at menus over "Eureka Prices," slightly or moderately inflated rates for items undoubtably aimed at the tourist crowd.  There was none of that here.  Prices were actually lower than we expected, and we gleefully determined we'd try several things and not feel guilty.

One of the two very sweet young ladies waiting tables was working a group in the far corner.  She was warning them that there were just two slices of the quiche of the day, and before she could go into a schpiel about the ingredients thereof, both were claimed. 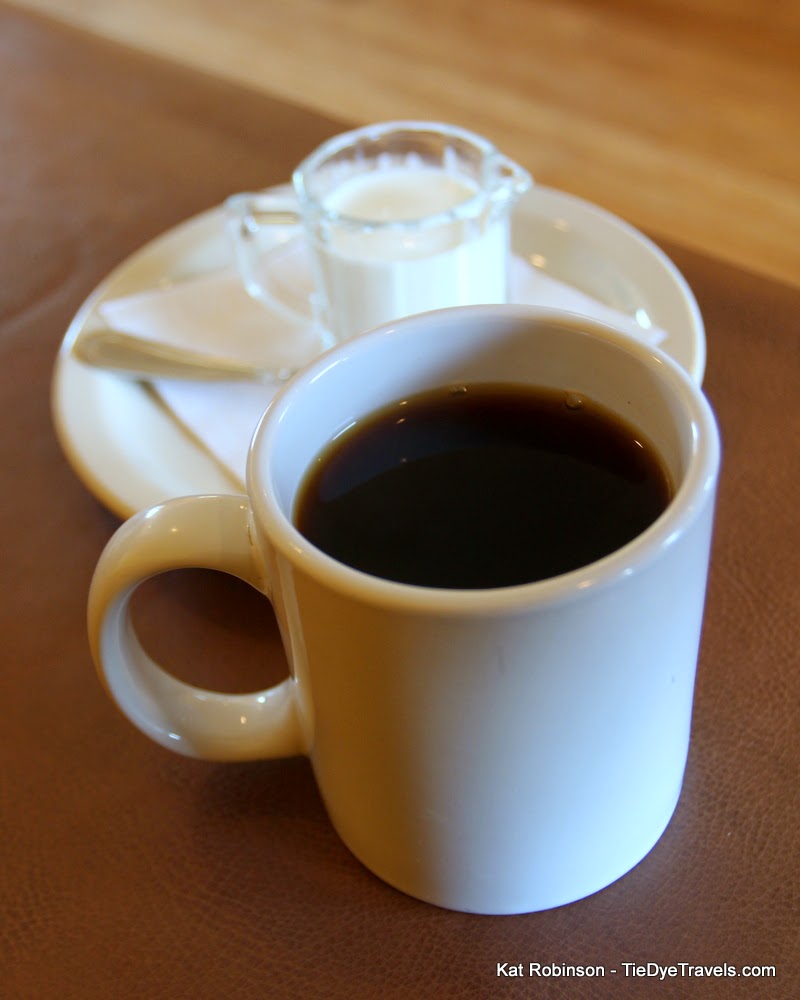 Our coffee came hot and fresh and with real cream, and after dithering a while we made our choices and went to waiting.  It was pleasant -- not too loud, not too rowdy and the chairs weren't uncomfortable.  Grav went off to shoot the interior and came back pointing his finger skyward and nodding his head. He'd discovered macaroons on the front counter and had reserved two for us. Okay, this was breakfast, but we were going to have dessert, apparently.

Thus continued our wait, as each of the other tables in the eastward 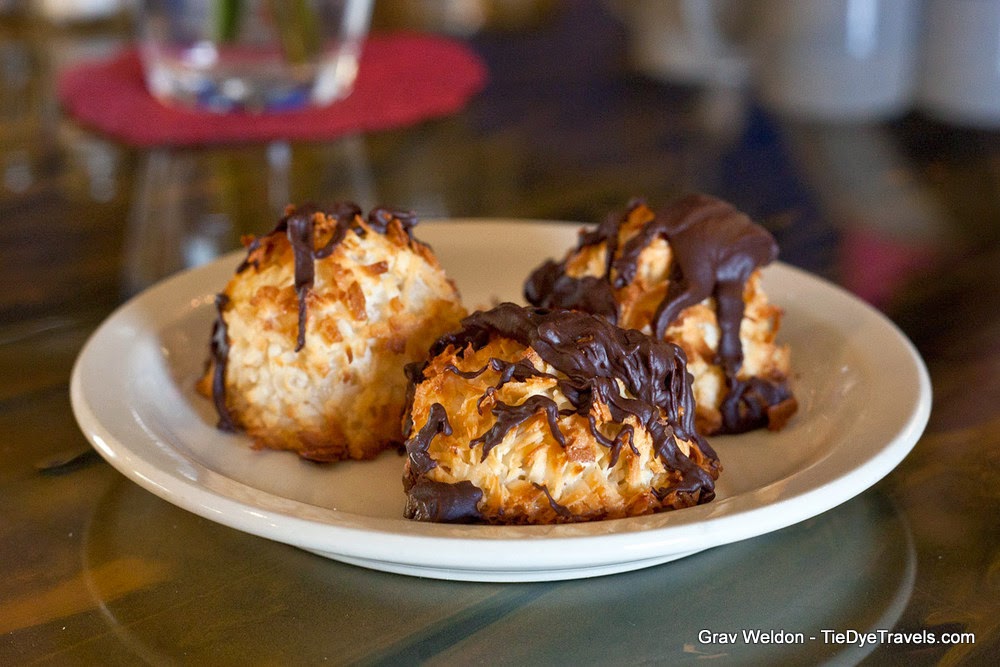 room were served.  Yes, they'd all come ahead of us, and we weren't bothered by that, but the sight of so many good looking plates was making me drool.  Big, fluffy omelets were passing, alongside mounds of bacon, crepes filled with fruit salad and bevies of biscuits.  The scent was salivation-inducing and it was all a bit heady -- but my coffee mug remained full and we sustained our cheerfulness. 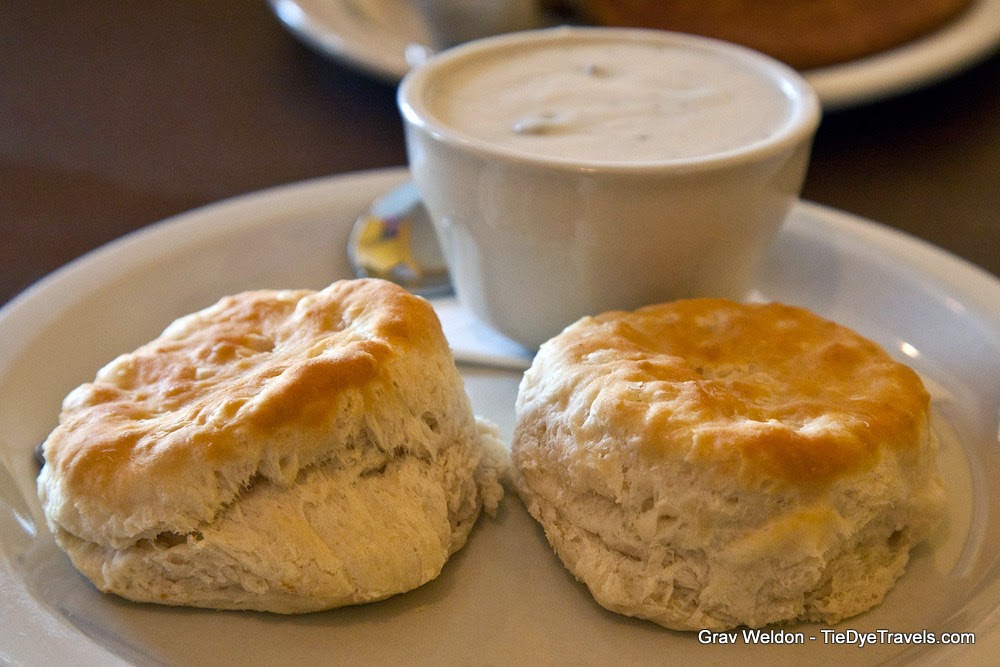 And then, all of breakfast arrived at once, three plates of it, with accompaniments to each side.  We stared for mere seconds before pulling out the BACs (the big cameras) and going to work shooting and celebrating this repast we were about to encounter. 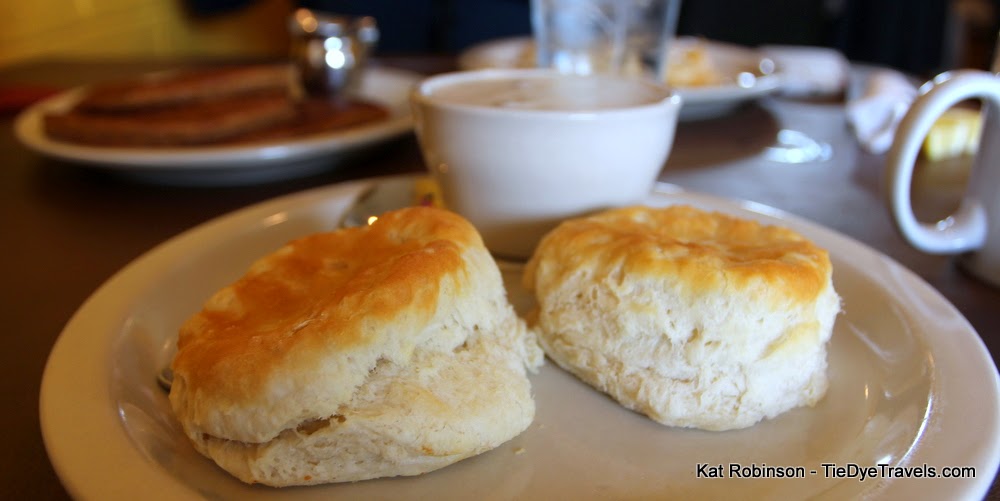 And what a repast.  Grav had chosen biscuits and gravy, and the big hand-sized fluffy lumps were accompanied by a full bowl of sausage gravy. What's more, the dish was enough for someone 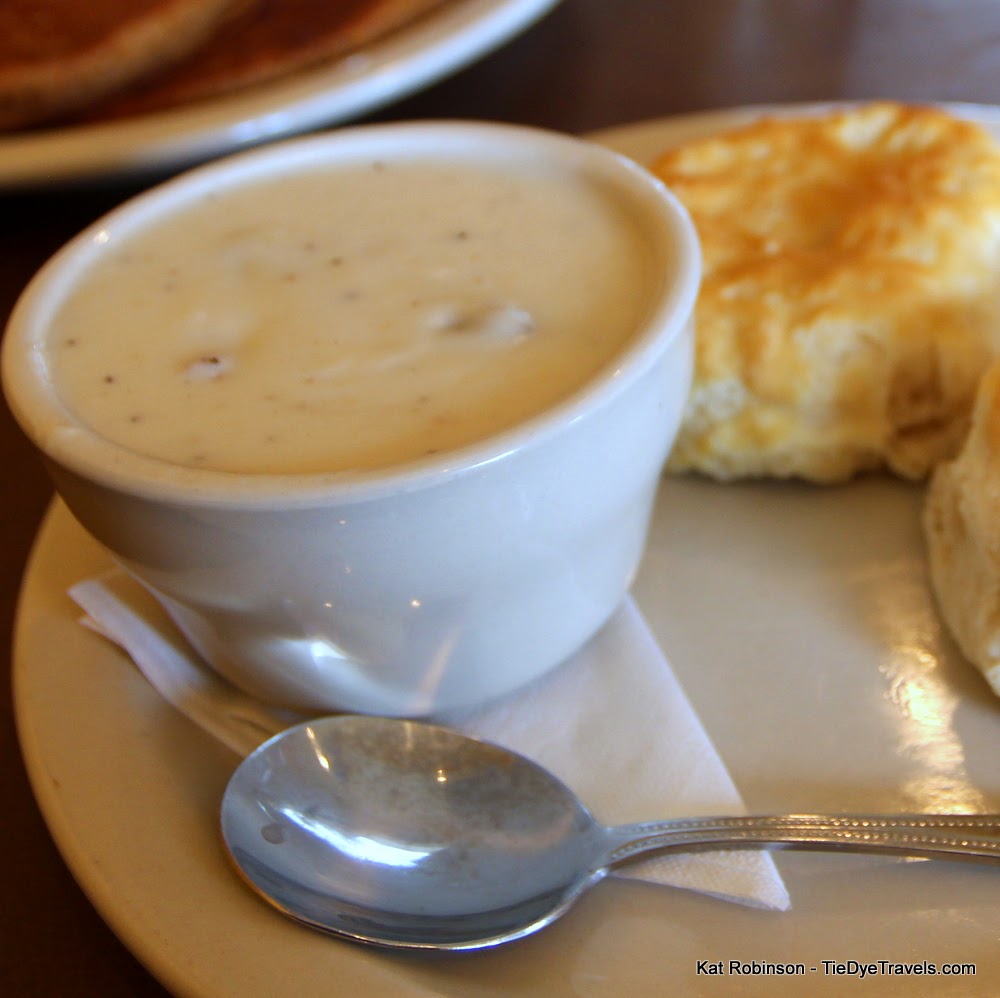 to eat as a single breakfast, and yet cost just $3.25. Incredible.

Grav said the sage-inflected sausage in the creamy gravy base were substantial, and the biscuits were perfect.  I can agree with him on those -- they were fluffy and a little buttery and rightly hot from just coming out of the oven.

They were so much that Grav actually gave me 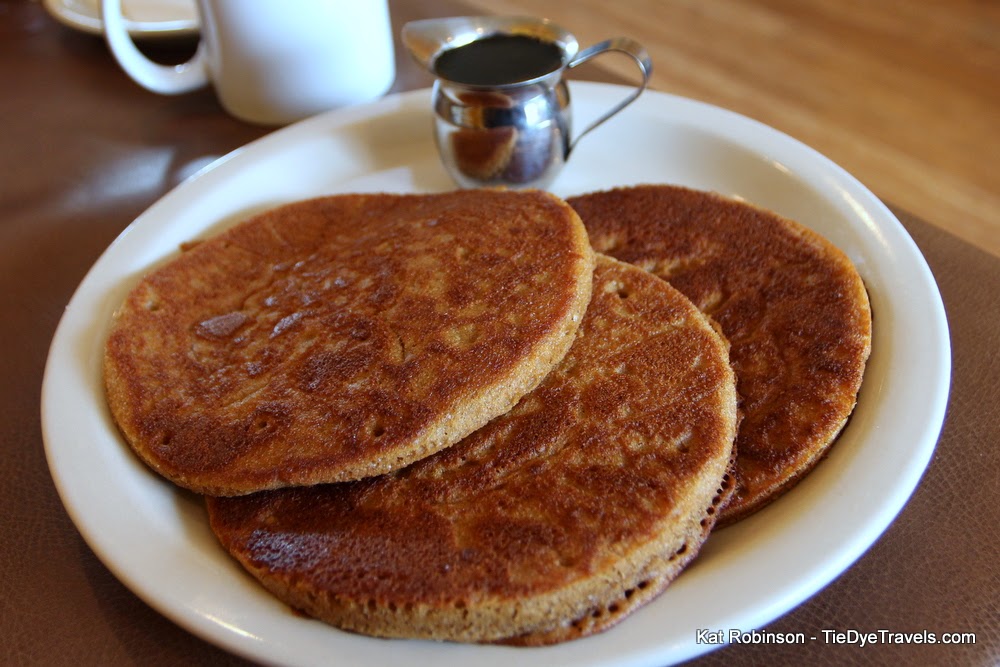 most of the pancakes.  Or, I should say, "flannel" cakes.  Now, I've had my share of gluten-free this and that, and usually there's a sad air of disappointment over the whole affair.  Not here. The pancakes, which came three six-inch rounds to an order, were made from a combination 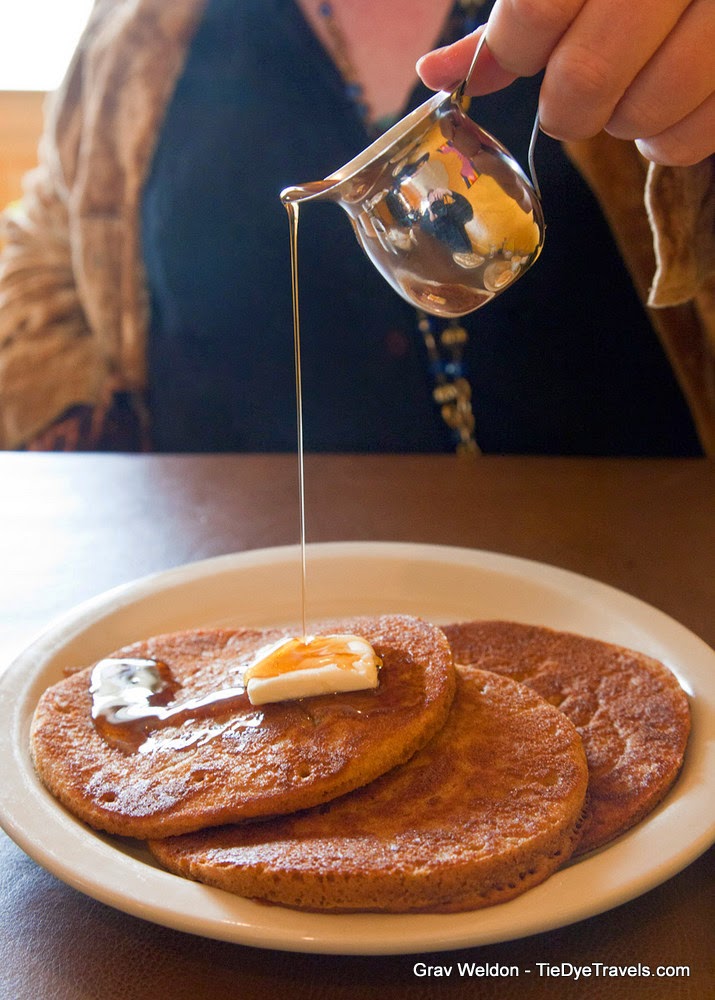 of rice flour and tapioca, decadently spiced with nutmeg, cinnamon, ginger and perhaps a bit of clove, and they were both velvety and impossibly light. I thought they tasted like the lightest gingerbread I'd ever consumed, while Grav went on about the pumpkin spice flavor.  Best of all, there was the option that I took, for real Vermont maple syrup to go along with the real butter offered, for something absolutely fanciful and still very, very filling.

Still, that wasn't all we enjoyed.  There was one dish that, from the moment I spotted it on the menu, I knew had to go in my mouth.  That dish was of the seafood crepes. 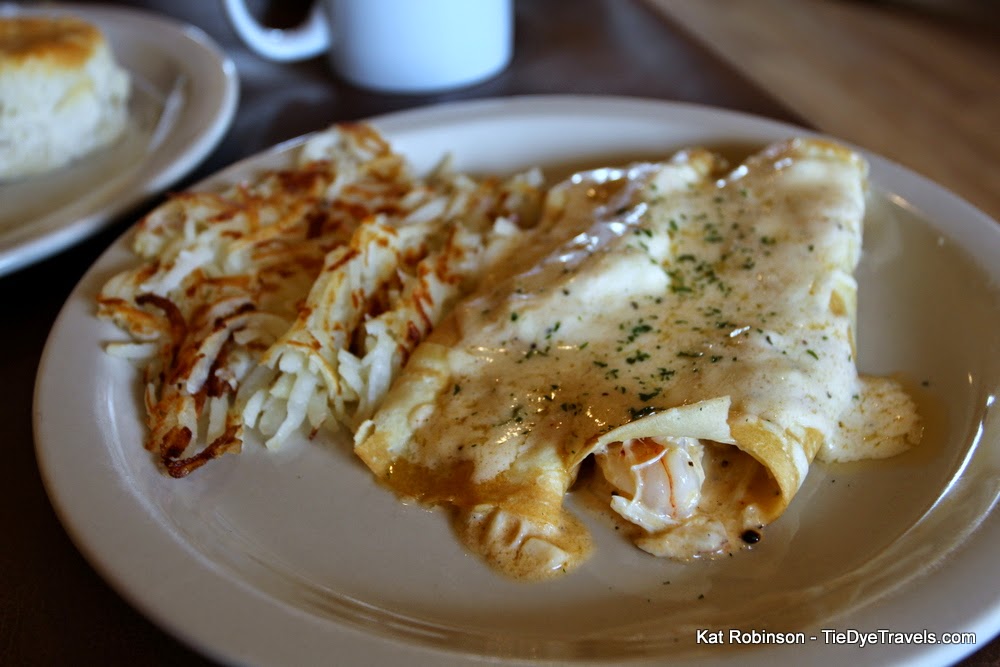 Oh golly.  Offered with either hashbrowns or grits, this was a pair of delicate rolls packed with shrimp and crabmeat in a Bechemel sauce.  I cannot quite express how velvety and rich this was.  We chose to split one to each of us, and after Grav finished the dish off he 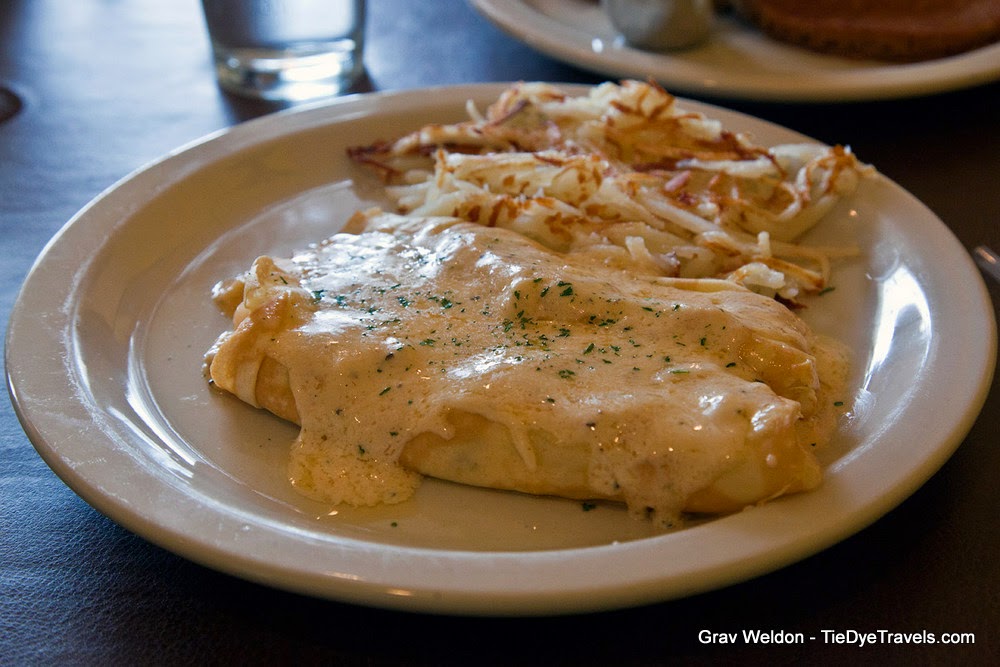 scraped his fork along the surface for more of the rich filling.  I thought he was going to lick the plate. He confessed the thought had crossed his mind.

And then the macaroons arrived.  I was already quite sated after the crepe and two of the pancakes and had already called for a container to take the remaining round home, and here come these two morsels.  Now, if you've had a Mounds bar, you probably have an inkling of 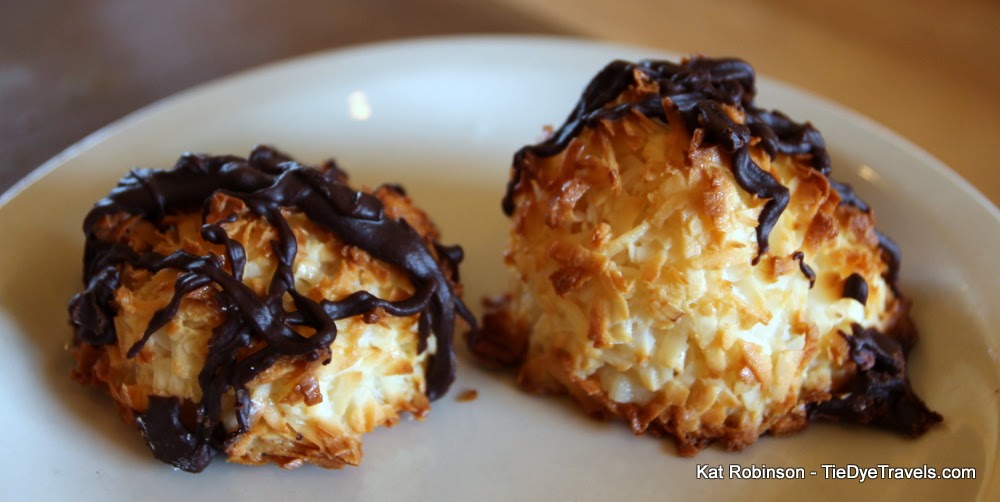 what a dark chocolate drizzled macaroon is like to the taste.  These weren't even close.  The toasted, moist bundles of coconut were rich but not overly sweet, pliant but not chewy, crisply edged but not dry.  They were so perfect I almost ate all of mine.  Sheer willpower and the encouragement of the waitress who suggested home consumption without any compunction is all that kept me from injuring myself on the thing.

We were never rushed, which is why we didn't actually leave before 11:30.  I should have taken a photo of the lunch menu, darn it -- but I do recall so many good things, such as a seafood melt sandwich, burgers, a savory cheesecake and a daily plate lunch special.  In fact, Sweet -n- Savory Cafe seemed so much like a better version of the classic diner or cafe, right down to the prices, that anywhere else it'd be a standout jewel.  Eureka Springs offers so much competition, and frankly from the road the Sweet -n- Savory Cafe looks a bit plain.  But go inside.  Go eat.  And then tell your friends.

You'll find the Sweet and Savory Cafe on the east side of town on US Highway 62, across from the Pine Mountain Theater.  It's open every day except Wednesday (and of course, when the weather is terrible) for breakfast and lunch. 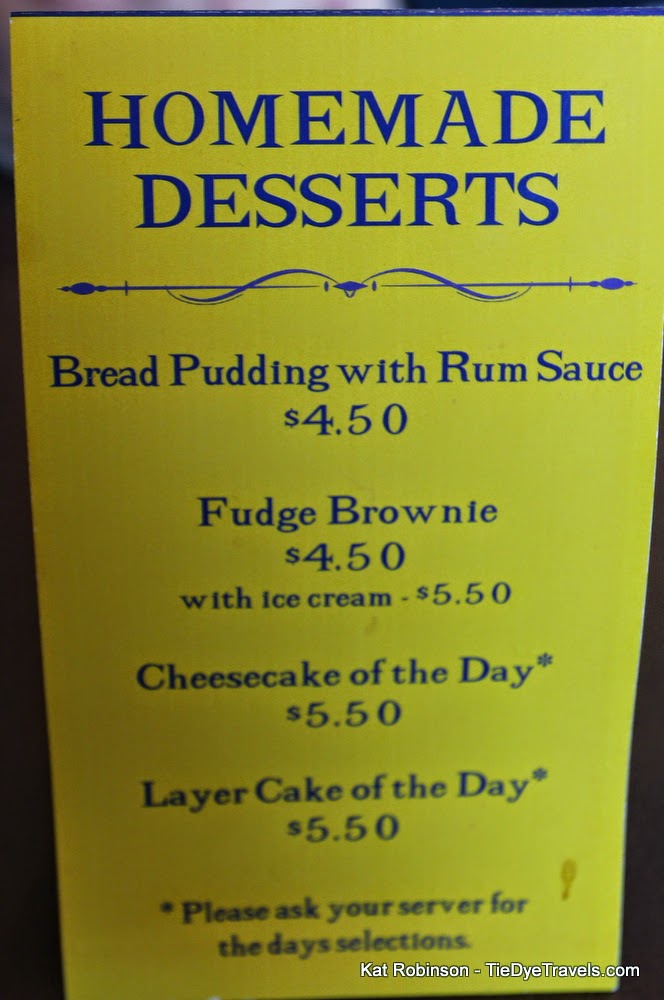 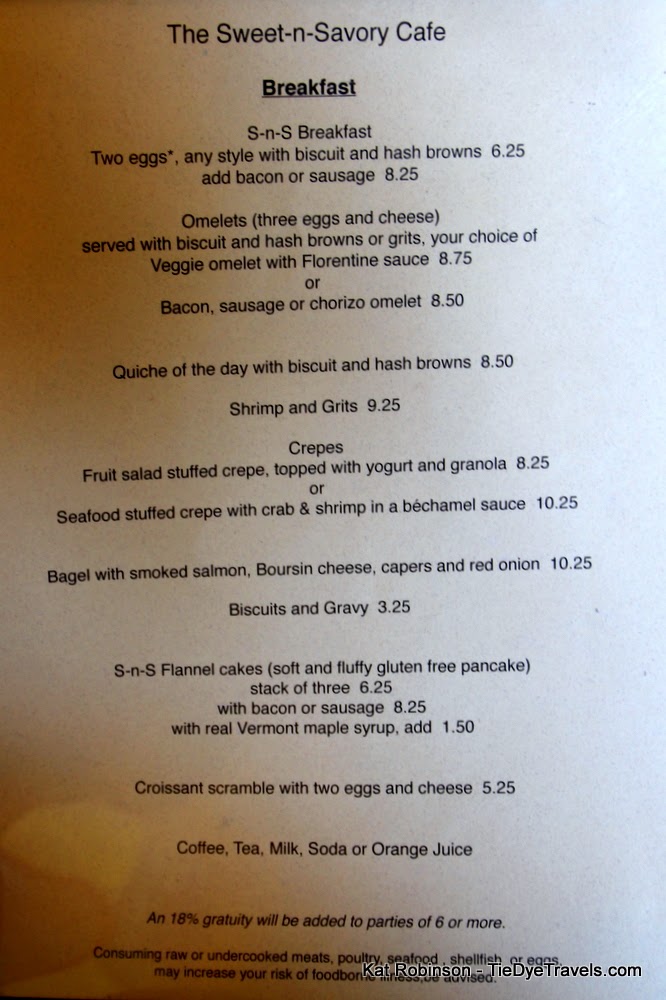 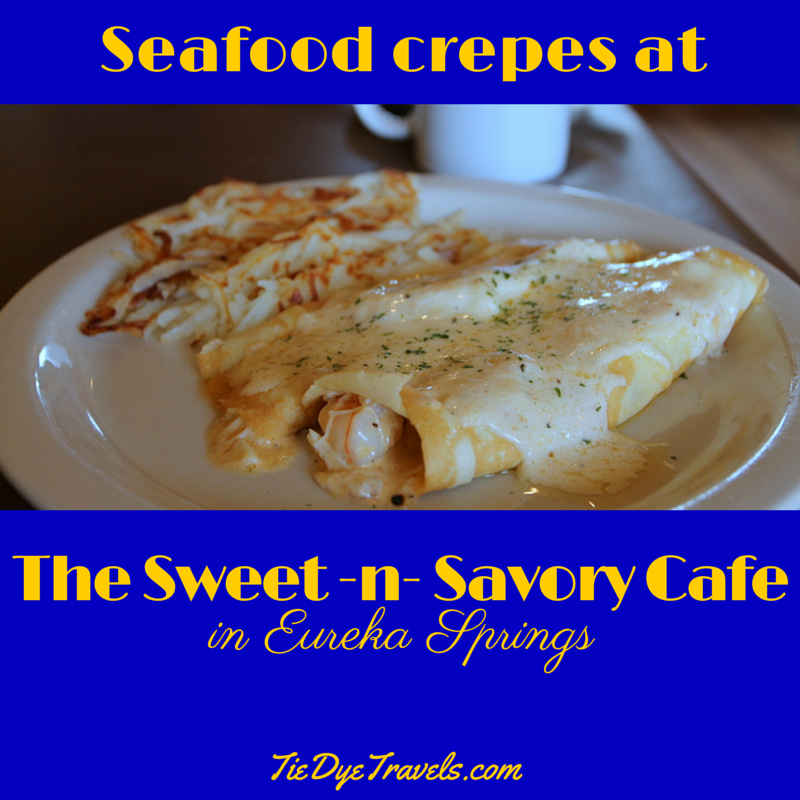