Izzy's on the West Side of Town. 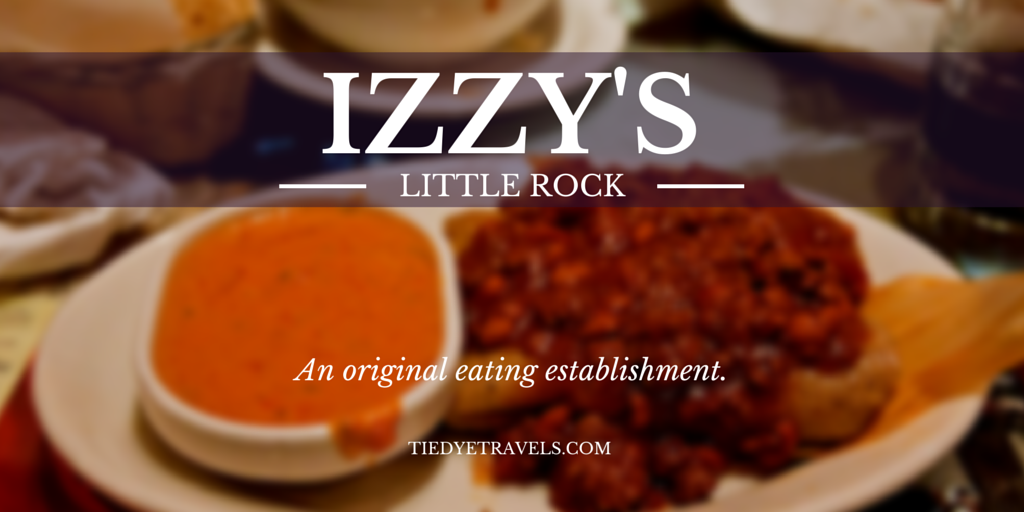 Izzy's is one of those.

Colorful, huge and sprawling out on The Ranch out on Highway 10, this current incarnation of the long-standing friendly restaurant stands out almost at the edge of town. It used to be on the edge of town decades ago when Bob Isbell ran it, and it got moved further out after he passed it on to his son and daughter-in-law, Robert and Heather Isbell. I keep wondering, now that it's surrounded by neighborhoods again, if Izzy's is going to move even further out Highway 10. Much further and it'll be in Lake Maumelle. 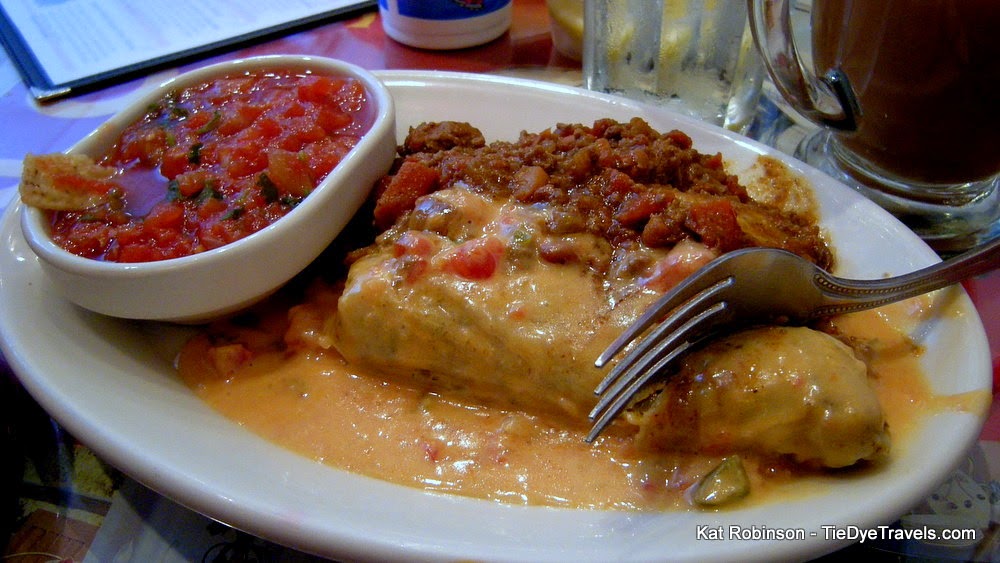 But Izzy's has always been a comfortable place -- friendly, brightly colored, safe for kids. And the tamales are one of the most underrated food experiences in town -- tasty but not too spicy, fat and served with additional bits, whether 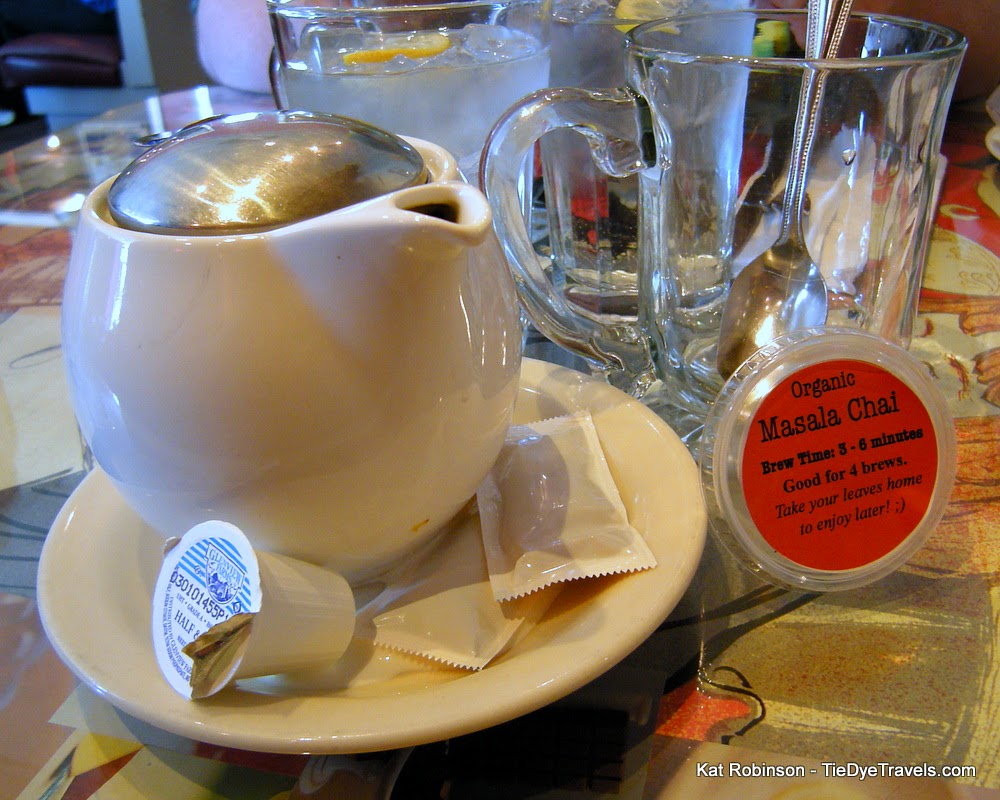 it's cheese dip or salsa or chili. I have been known to go dine on just one with the chili... and crackers, of course. Shooting at Izzy's never produces studio-style pictures, of course, with every table having a different melange of photos and memorabilia under its surface.

Somehow, though, I'd neglected to take Grav out there, so we went on a frigid December day. I told him about the teas, the marvelous houseblended loose-leaf teas that you savor there and then take home for later. Izzy's teas are the bomb-diggety, I tell you what. 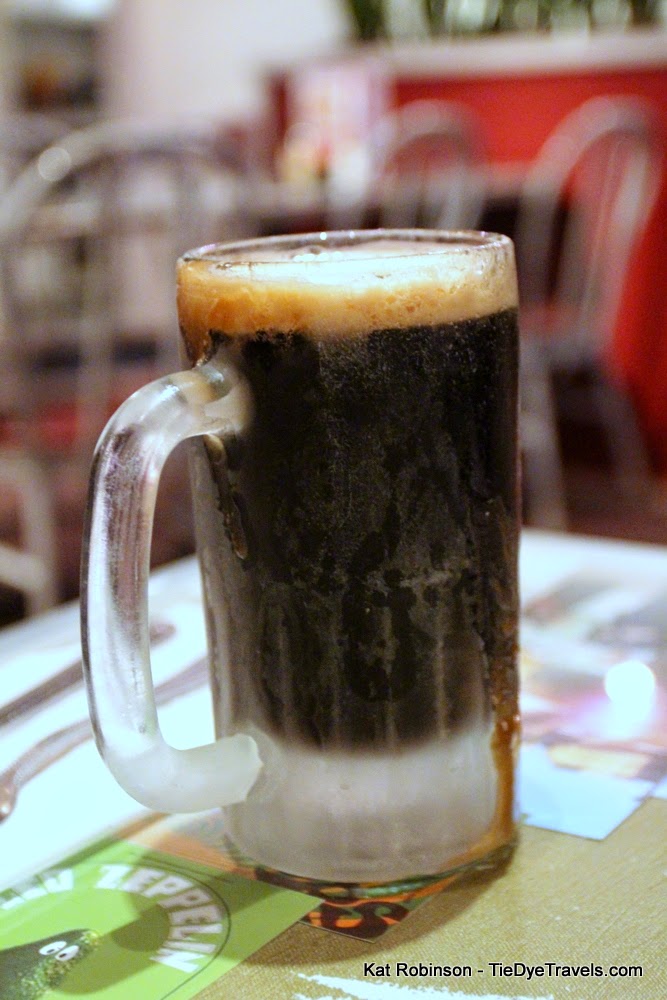 But Grav's not a big hot tea drinker like I am. He did, however, manage to spot a combination that I hadn't before. He noticed the frosted mugs for beer and requested his root beer in one. I honestly think he's smarter than me. Sometimes.

Now, deciding what to eat may be the hardest thing to do at Izzy's. It's full of choices -- not just for me, but for anyone with a crazy food sensitivity. Izzy's offers special menus for vegetarians and for those practicing a gluten-free diet. There's a lot of meatless offerings and a whole lot of different flavors. And when we asked for cheese dip, our waiter didn't even bat an eye when I asked for potato chips for 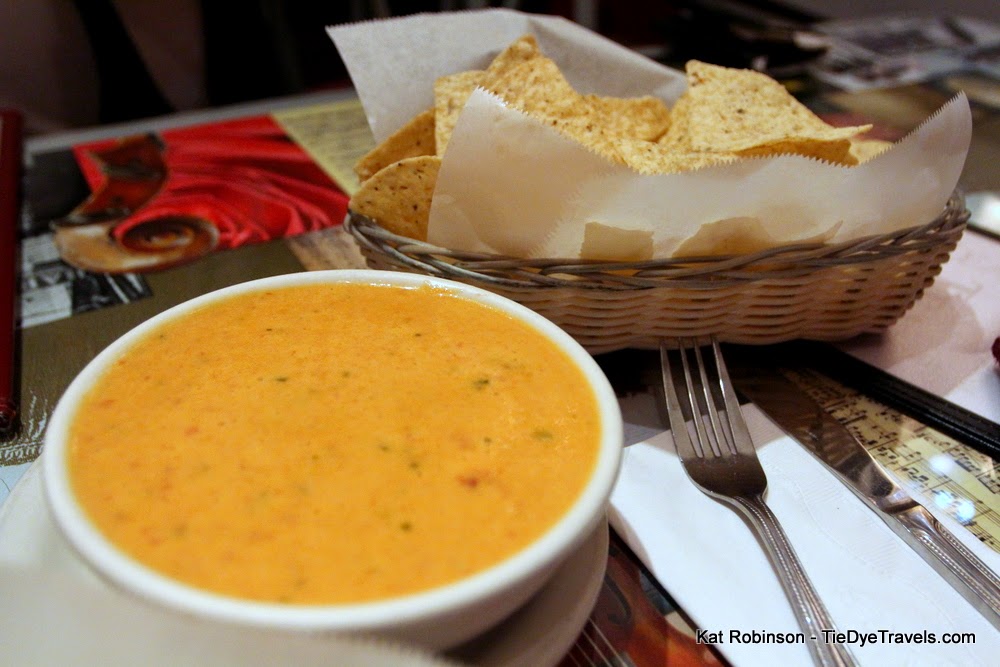 half instead of tortilla chips. Nor did he make a fuss when he came back to find Grav preferred potato chips with the dip, too.

The cheese dip at Izzy's is deep gold, almost orange, not very spicy but with nice deep and sharp Cheddar tones. It's a little runny for ruffled potato chips but that was all right. It's rather good.

We debated over different choices while we nibbled chips. Grav asked about the Nutty Bird, which is turkey and cream cheese with sunflower seeds. I've had it before. It's pretty good, especially if you're wanting a cool sandwich in the summer. I told him about the Salmon Nicoise, which is a poached salmon fillet with salad. We discussed the tamales, and he pretty much stuck with it. 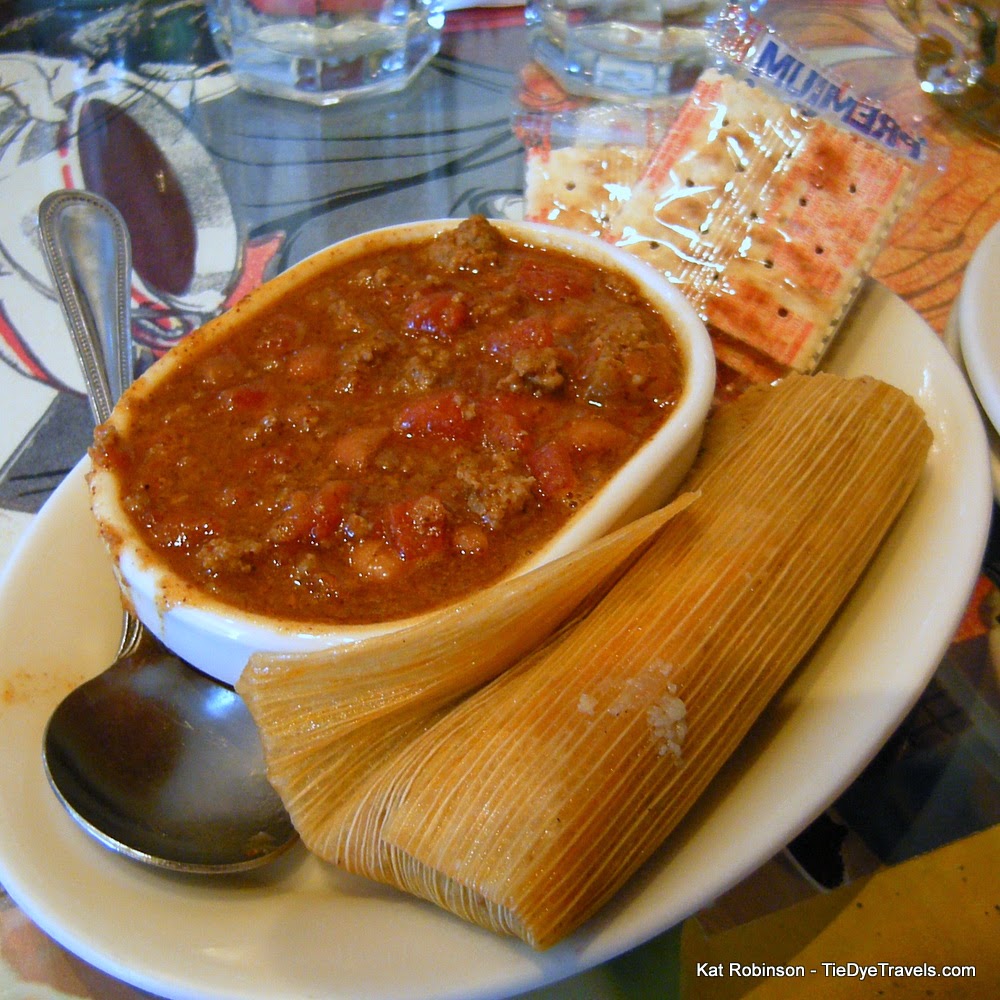 Now, tamales. Izzy's has two different sorts of tamales, beef and a vegetable tamale that's full of black beans and a smattering of finely chopped vegetables. Those tamales are served in all sorts of combinations. You can get One Big Tamale as an appetizer -- either the beef or the veggie -- with chili for the beef and cheese dip for the veggie. Or you can swap around -- salsa and guacamole are also 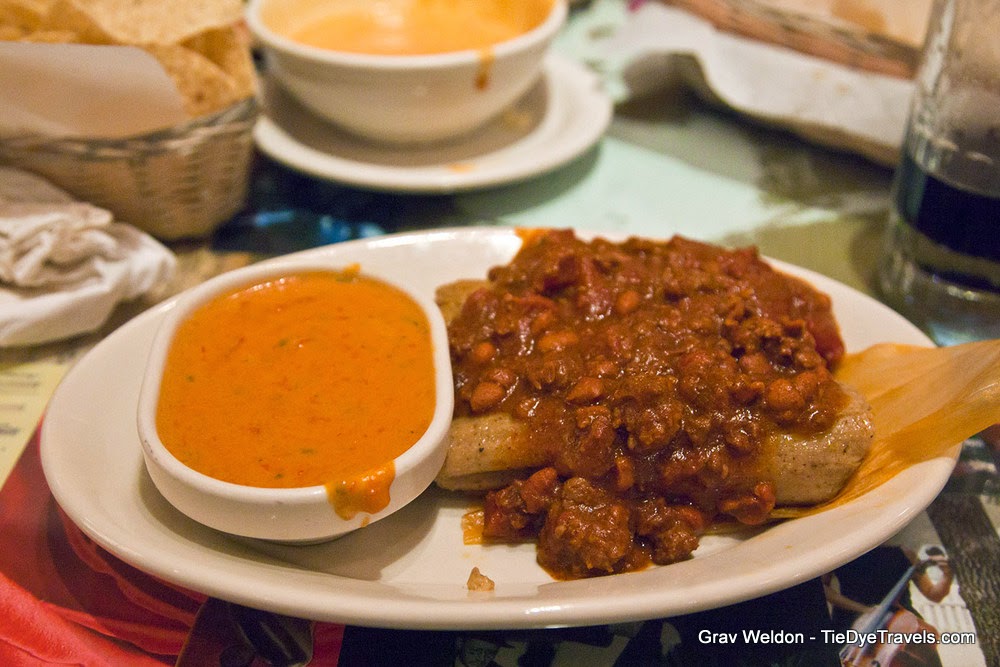 acceptable substitutes. You can also get a platter of two and either mix-and-match or get two of the same. This is what Grav did this time around, choosing chili-topped beef tamales served with more cheese dip. I think he was surprised just how filling they were. 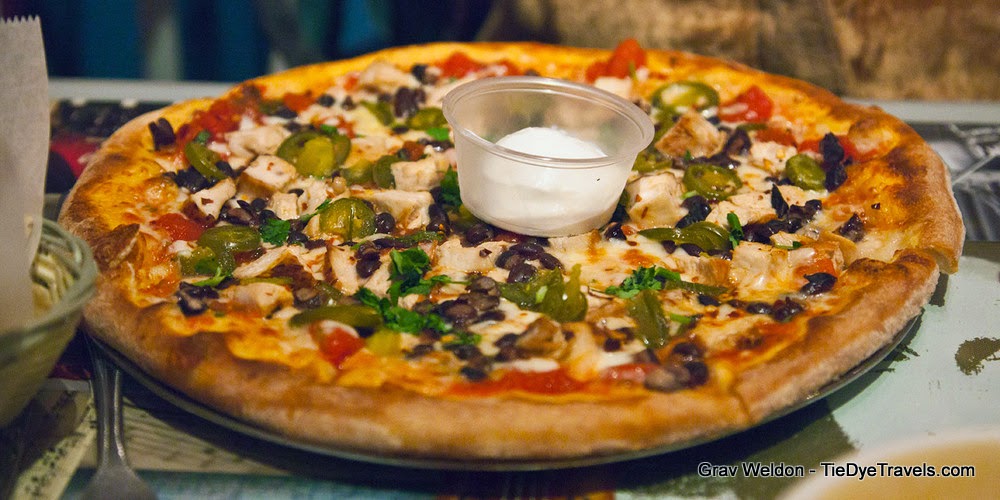 Me? This time I decided to go for something I've wanted to try for a long time but always demurred. I went for the Wild West Chicken Pizza. Yes, I knew I'd be taking it home. 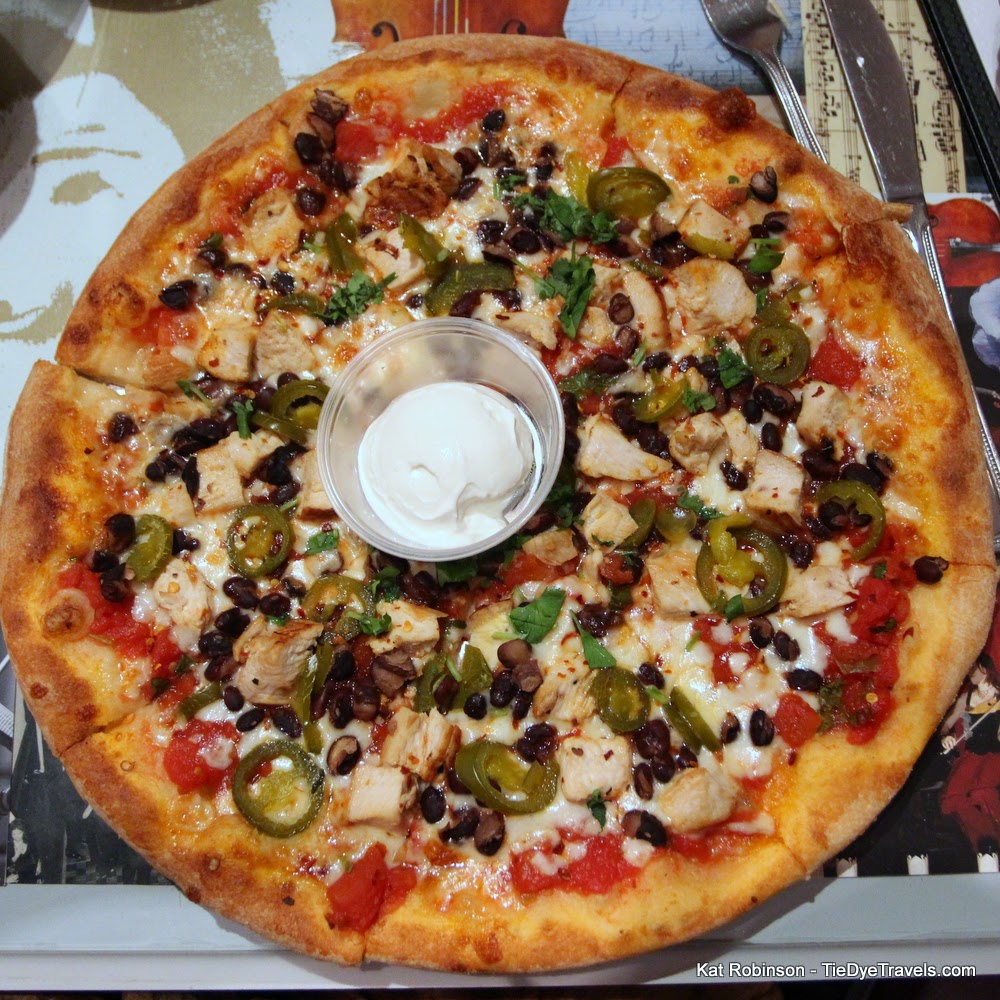 That's all right. This is a thin crusted fork-ready pizza that comes with a salsa base, with chunks of grilled chicken, red bell pepper and purple onion, black beans and bits of cilantro and mozzarella and provolone cheese, and jalapenos. There's not a lot of cheese on this pizza, but the crust edges are crispy and strong enough to be dumped in the cheese dip. The rest of the pizza, though, becomes soft with the salsa, and it's really meant to be eaten with a fork. It comes with sour cream, which is a good balance to the jalapenos -- but I found myself drizzling more cheese dip over the whole thing. Did I mention I really like the cheese dip? 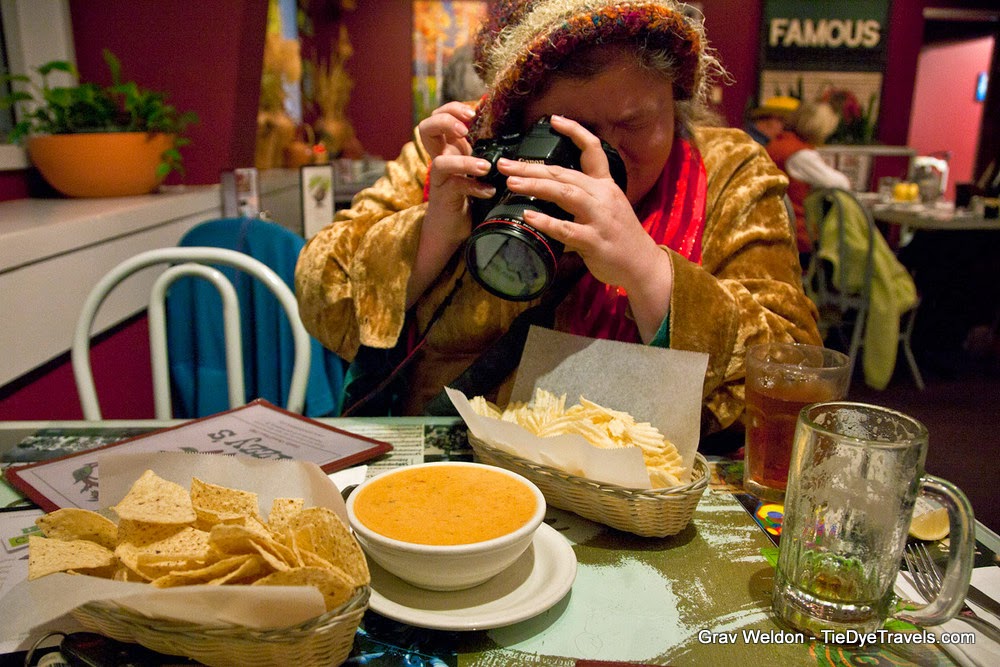 One of these days I'll finally get the cheeseburger at Izzy's. I never get there. There are way too many dang fine menu choices and when I get to the line about burgers I sorta glaze over. I shouldn't, though -- they come highly recommended. And at some point I have a feeling Grav will be back for the Super BLT, which includes a slathering of -- you guessed it -- cheese dip. 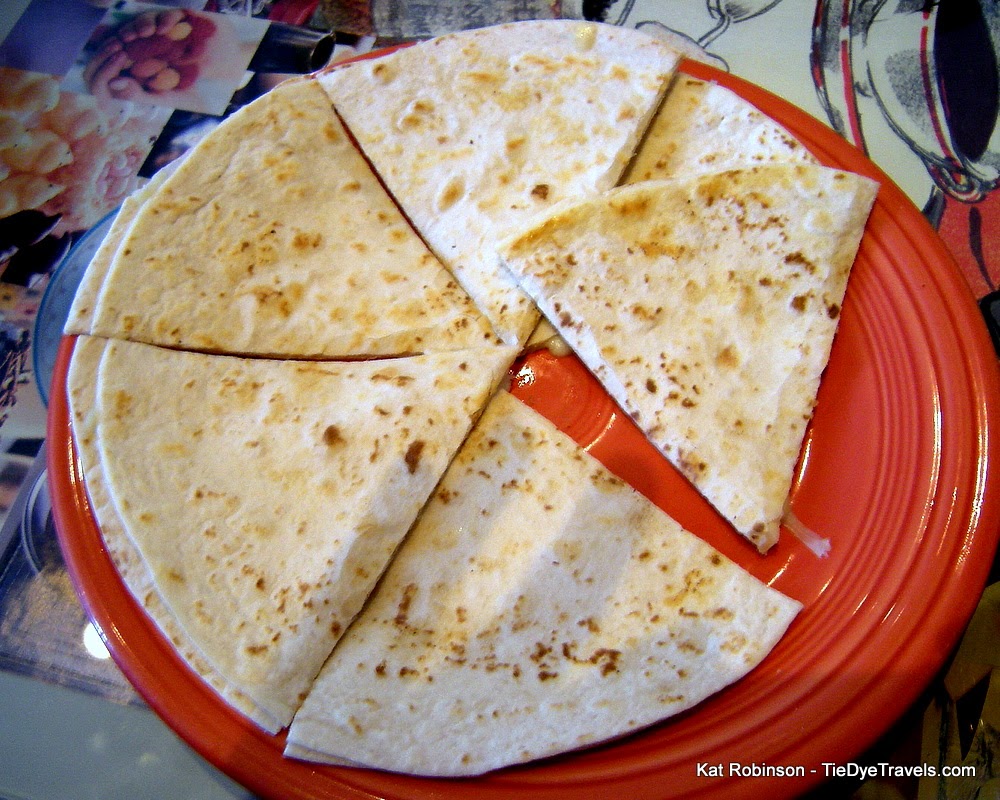 The kids menu for Izzy's isn't quite the predictable usual items you get with a kids menu. Rather than the standard chicken nuggets and corn dogs I see everywhere, Izzy's offers bowls of pasta -- noodles with Alfredo, marinara, meat sauce or butter ("naked"), a grilled cheese sandwich or a cheese quesadilla. But if you have an adventuresome child like mine, consider getting them the One Big Tamale. 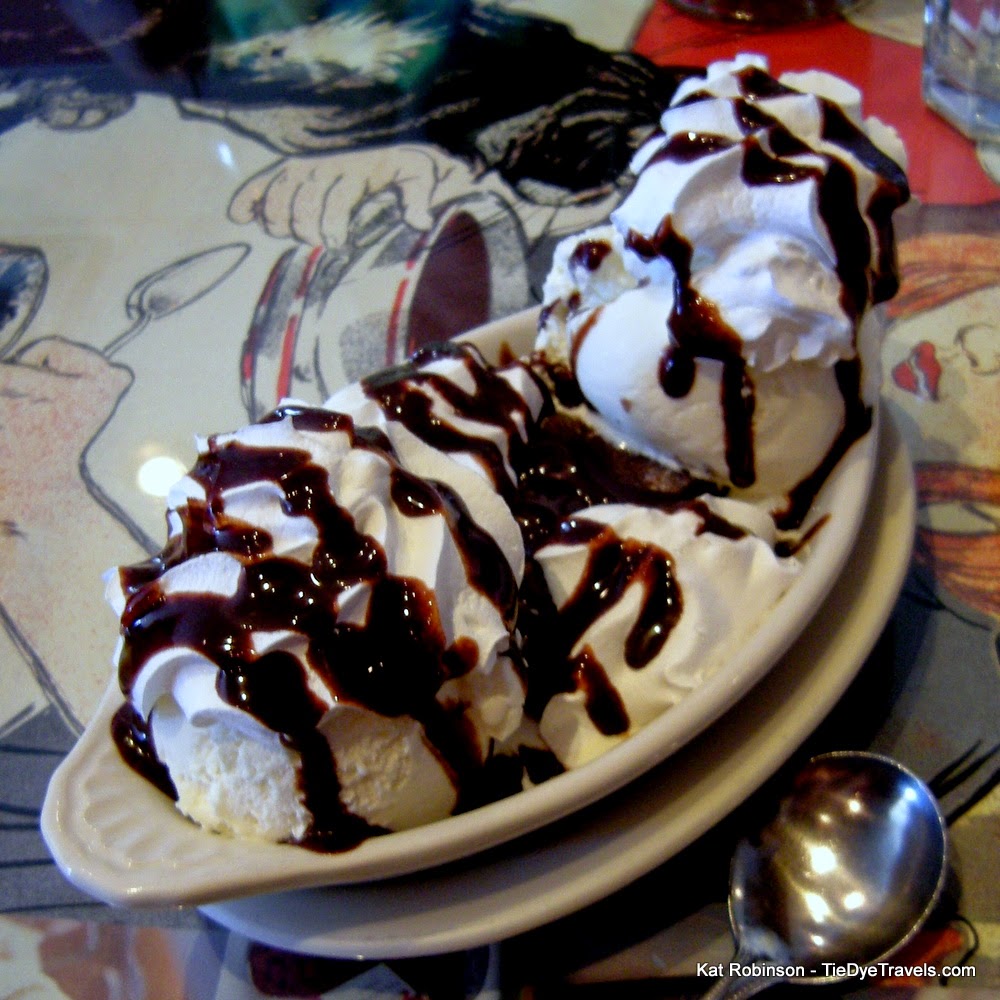 We didn't get desserts this time, but Izzy's does make a fine Key Lime Pie. I also forget that milkshakes are offered, and I need to try those sometime. Then there's the All-American, two scoops of vanilla ice cream on a brownie, drizzled with hot fudge and whipped cream. It's a two person dessert, and if you don't think so then more power to you, *I* can't eat it all by myself on a good day. It is righteously decadent.

As I mentioned, you can find Izzy's at The Ranch... which, if you're not from Little Rock, that's not going to do you any good. It's off Highway 10 west of I-430 several miles, and it's behind Osaka (which is pretty fine Japanese-style eating). It's open 11 a.m. Monday-Thursday, 11 a.m. - 9 p.m. on Friday and Saturday and is closed on Sunday. You can also buy tea leaves there to take home.