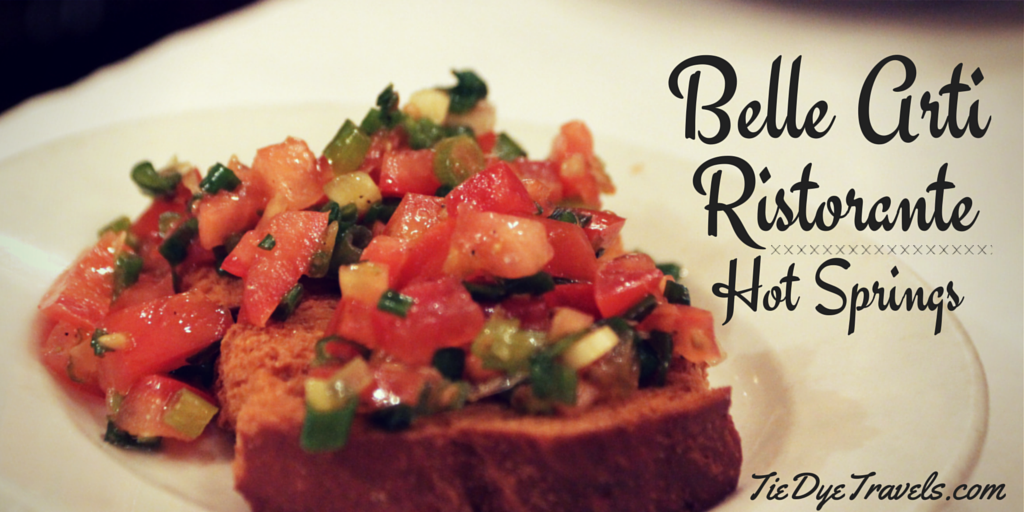 This restaurant closed January 14th, 2018. Many of its dishes were incorporated into the menu at its sister restaurant, The Porterhouse.

Italian immigrants are nothing new to Hot Springs. Many famous Italian names have been through the Spa City -- names such as Costello, Marciano and Capone, names of folks who really liked to dine at Italian restaurants. Er... wait... maybe that should go more towards an intro for the Gangster Museum of America. Let's try this again.


Another Italian name is gaining renown in Hot Springs: Gargano. Joe and Penny Gargano are the owners of a selection of fine restaurants downtown, including the classic Belle Arti Italian Ristorante. Joe was born in Italy and learned to cook there before moving to the United States in his 20s. In Manhattan he met Penny, and they owned restaurants there before moving to Arkansas. They opened Belle Arti in 2000 and have been serving up family recipes ever since. 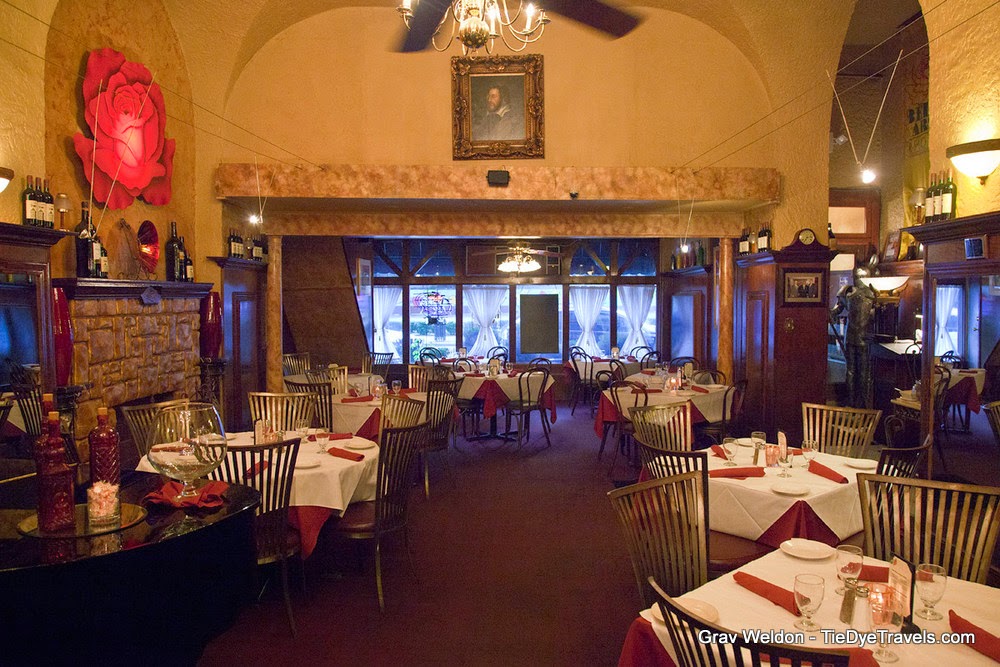 The main dining section of the restaurant sprawls through the heart of a building on Central Avenue with openings both at the front and the back (through the bar, which exits to Malvern Avenue). The lush golden and varnished wood interior is enhanced with mirrors and a 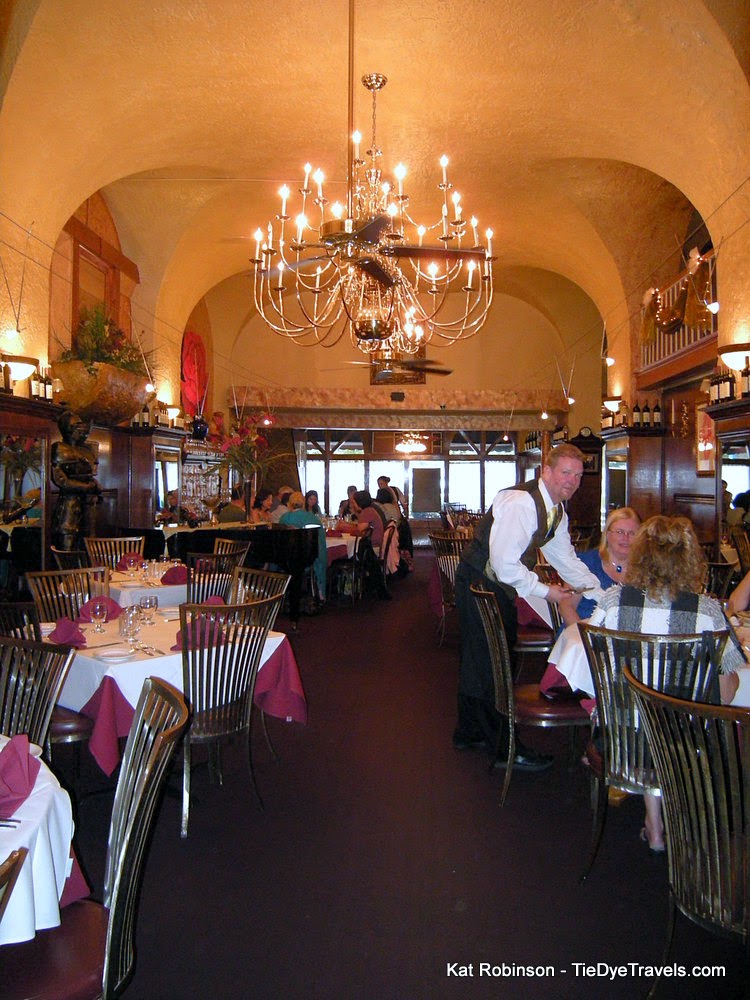 baby grand piano. There's a balcony over the bar with a separate dining area.

We went on a quiet Wednesday afternoon to catch a break between the lunch and dinner rush. Our waitress was very attentive. She presented us with an amuse bouche of toasted bread with a melange of fresh vegetables and tomatoes while we determined our dining pleasure.

A basket of fresh hot bread was also delivered to our table, along with butter and a marvelous tapenade that showcased the varied olives within. 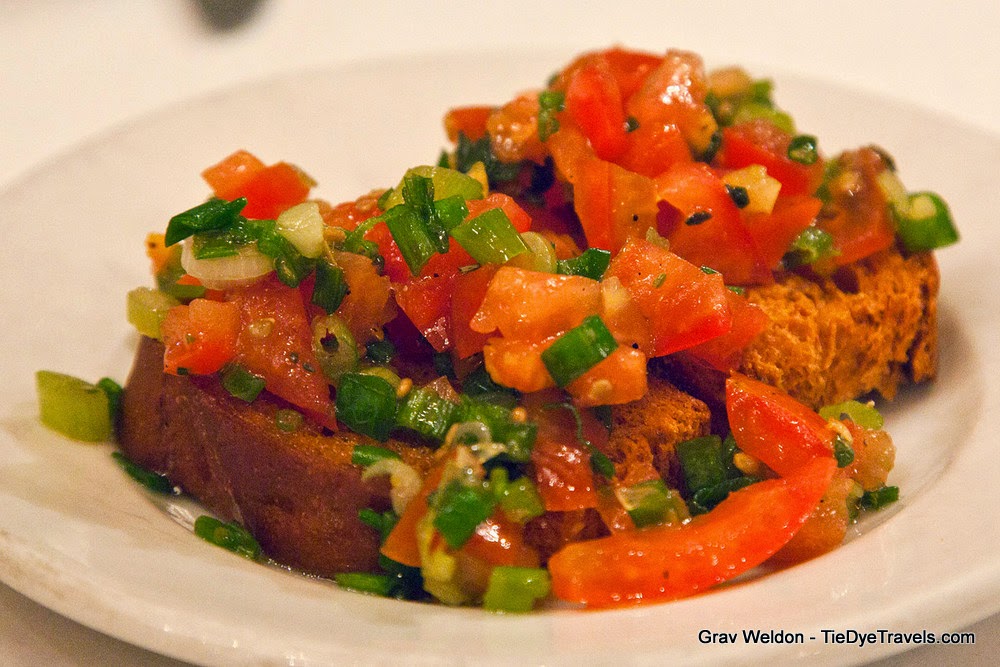 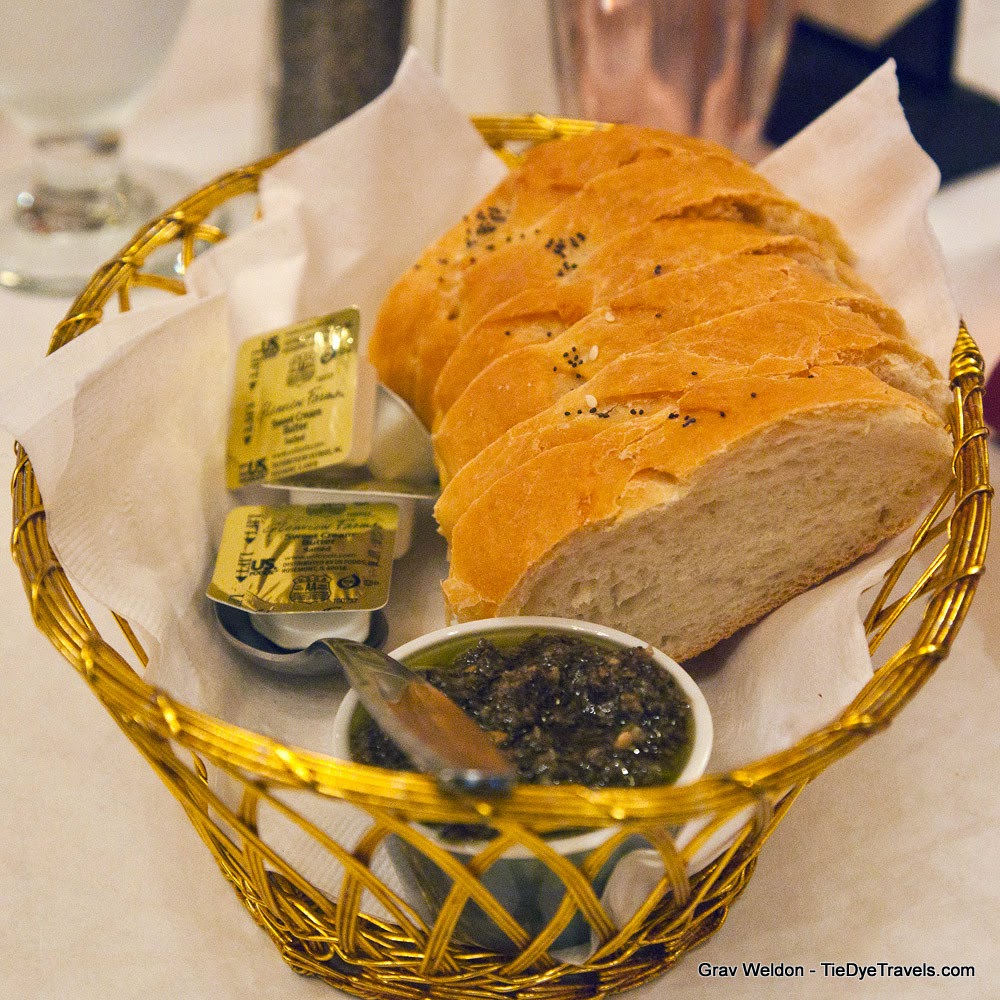 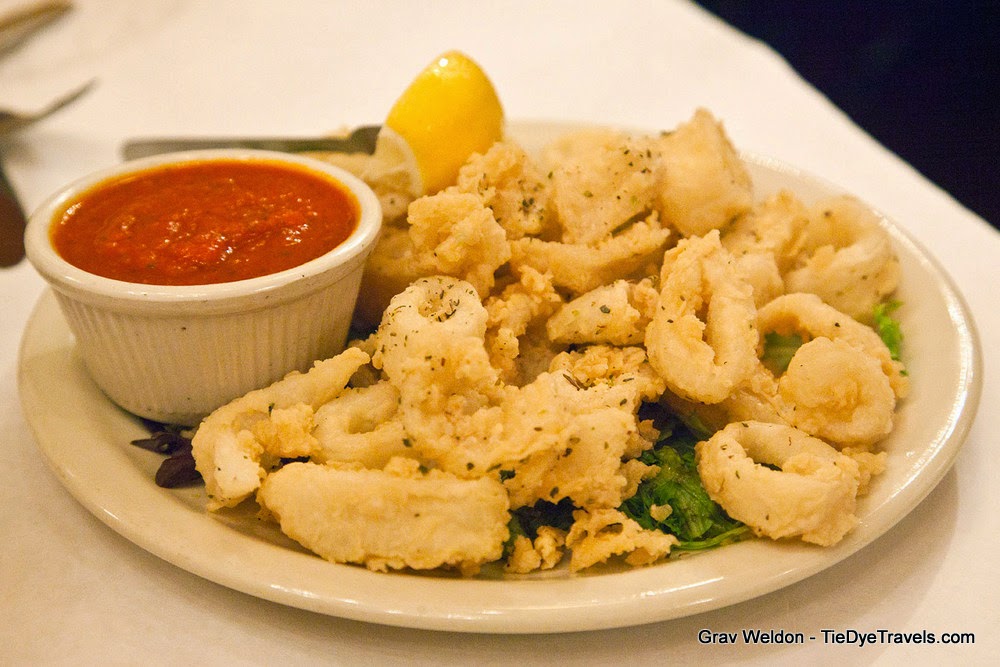 We started with Calamari Fritti, a platter of fresh fried squid served with marinara. These were deceptively addictive. Grav adores calamari, and I knew he'd love it but I was taken by the almost fruity marinara with the very light, just crisp rings. More important -- they were plentiful, and even 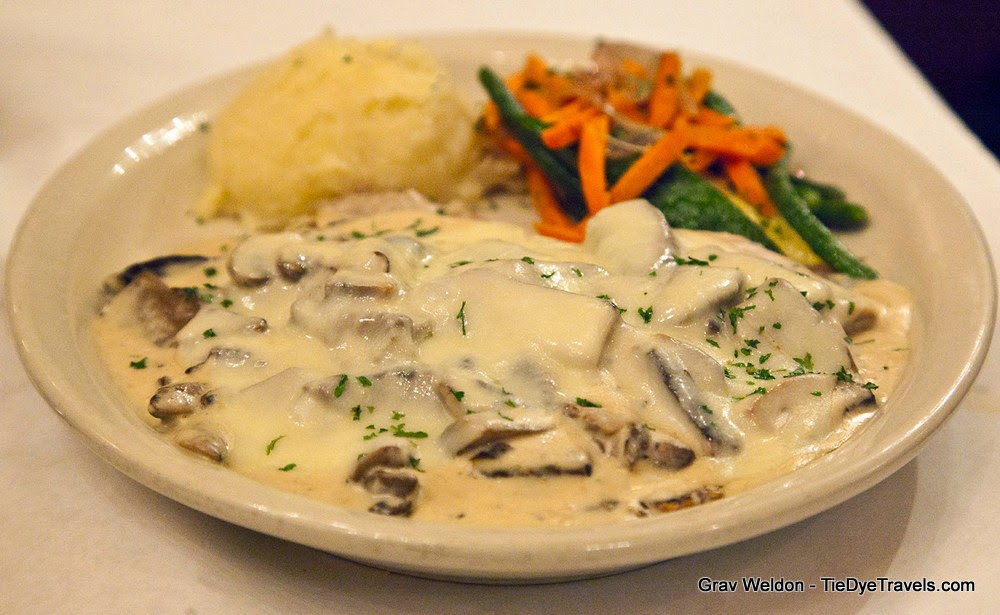 though we both dug into them we found we still had leftovers.

We skipped salads and instead went straight for entrees. I chose the Vitello Monte Blanco, listed as medallions of veal enhanced by melted mozzarella and a brandy 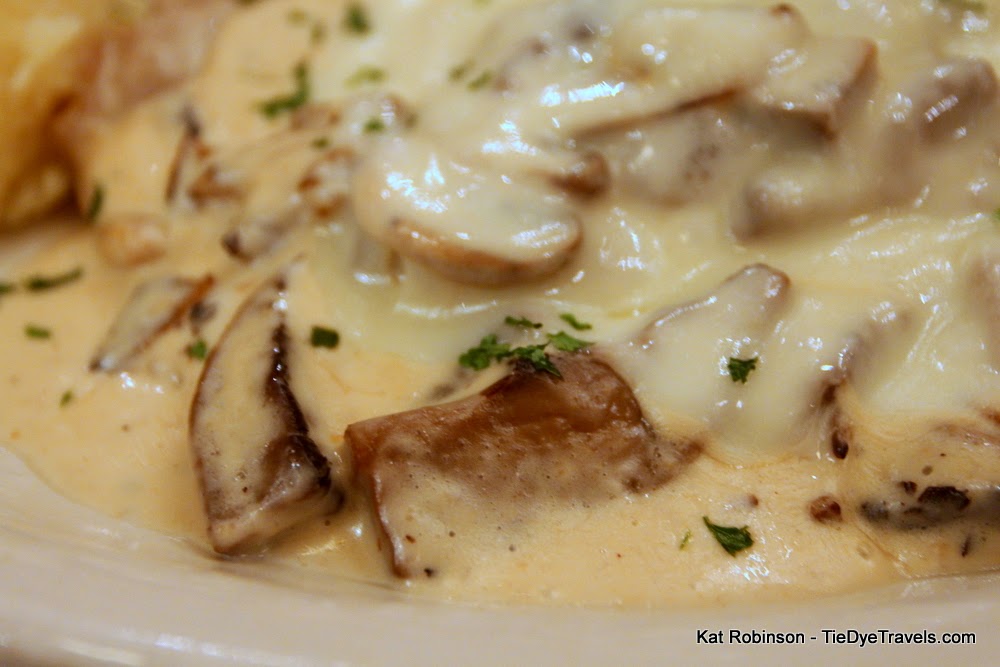 cream sauce.  Medallions? Actually, these were large flats of veal, heavily smothered with an extraordinarily thick alfredo-style sauce almost overcome with mushrooms.  I love mushrooms.  The dish was so rich and heavy it could have satisfied my hunger for several meals.  It was served with mashed potatoes and mixed vegetables but they were almost forgotten with this concoction. 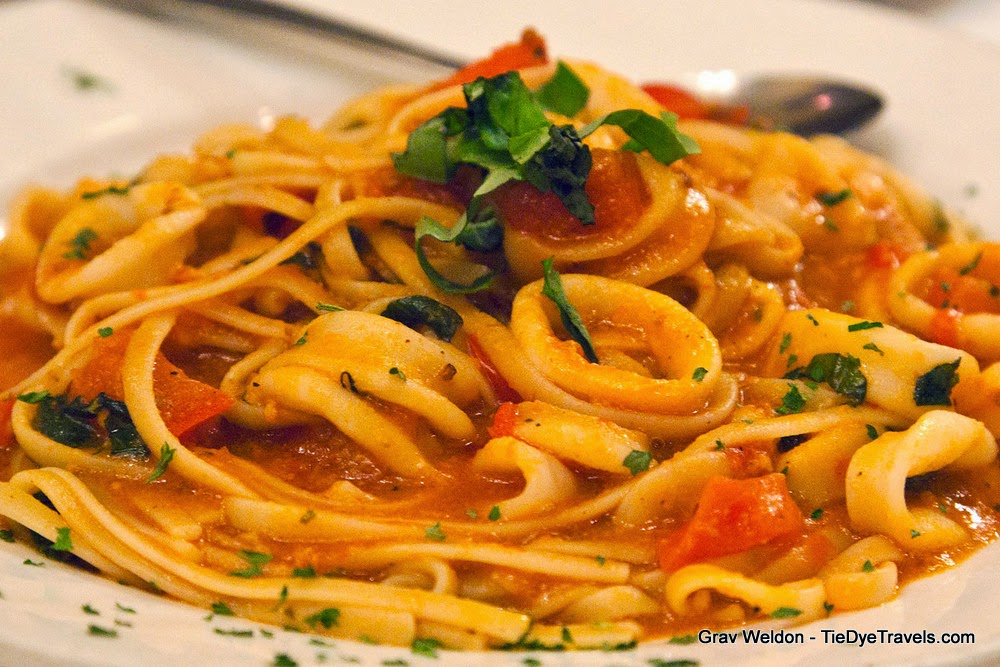 Grav spotted the Calamari fra Diavola, and as I said before, he adores calamari.  This time it came to the table on a bed of almost matching linguini, ringlets of both pasta and calamari delicately tossed with a spicy marinara.  It should have been heavier, if appearances were to be 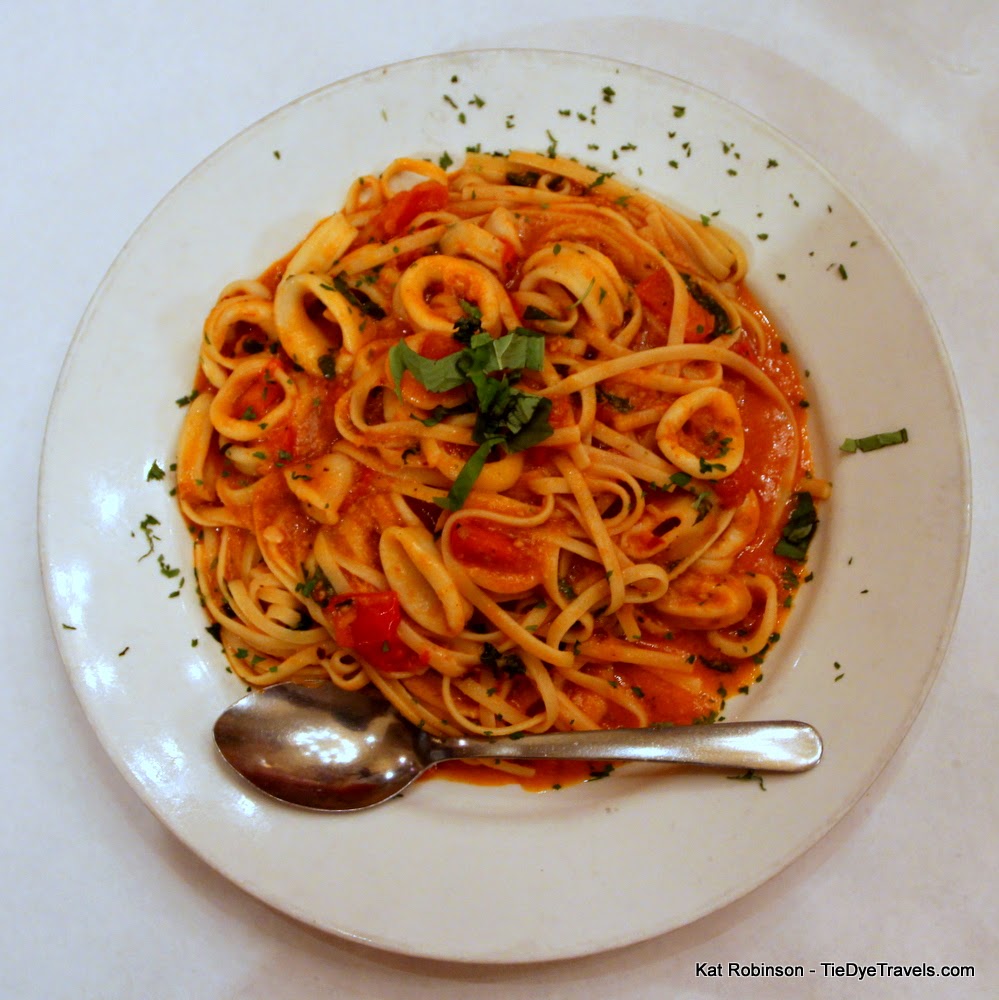 believed, but instead it came out as a frresh, summery, light dish with just the right touch of heat.

On this particular visit, our meals were so substantial we couldn't even contemplate dessert.  But I've had the marvelous tiramisu before, a stacked cube of alternating ladyfingers, espresso and cream that really should be consumed with coffee and 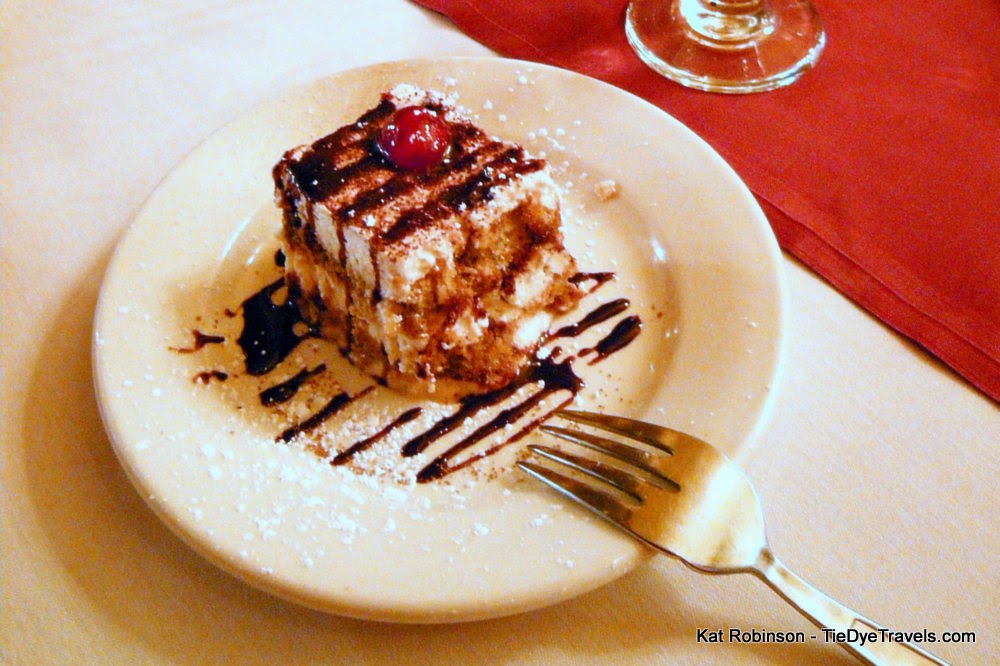 which is the perfect pick-me-up before heading out for more antics along Central Avenue before bedtime on a night meant to share with fellow partygoers.  It is a leaded, caffeinated dessert with marvelous appeal.  I just hope you pardon the rather dark photo I took on that visit, since the restaurant was quite mood-lit at the time.

Belle Arti, in its 15th year, has established itself well as a fantastic Italian experience for downtown Hot Springs diners.  I dare say, it'll continue to be a romantic hotspot along Central Avenue for years to come.

The message at the closure of Belle Arti. 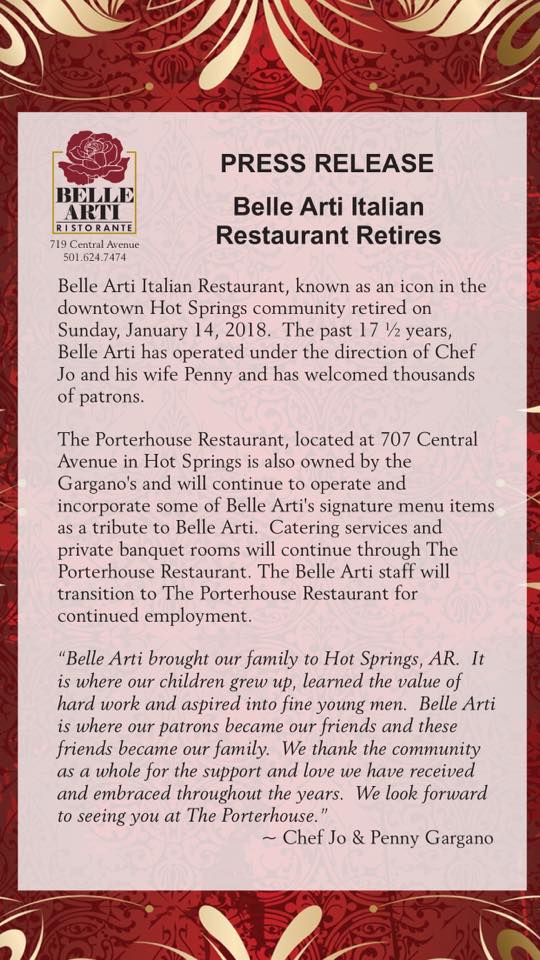 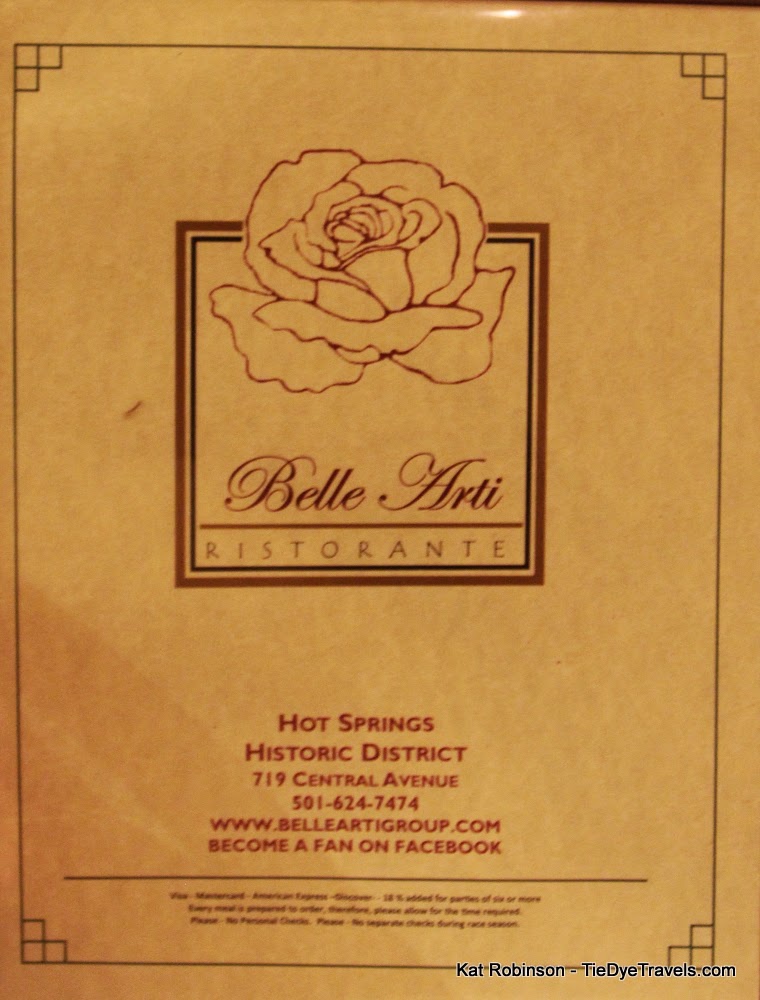 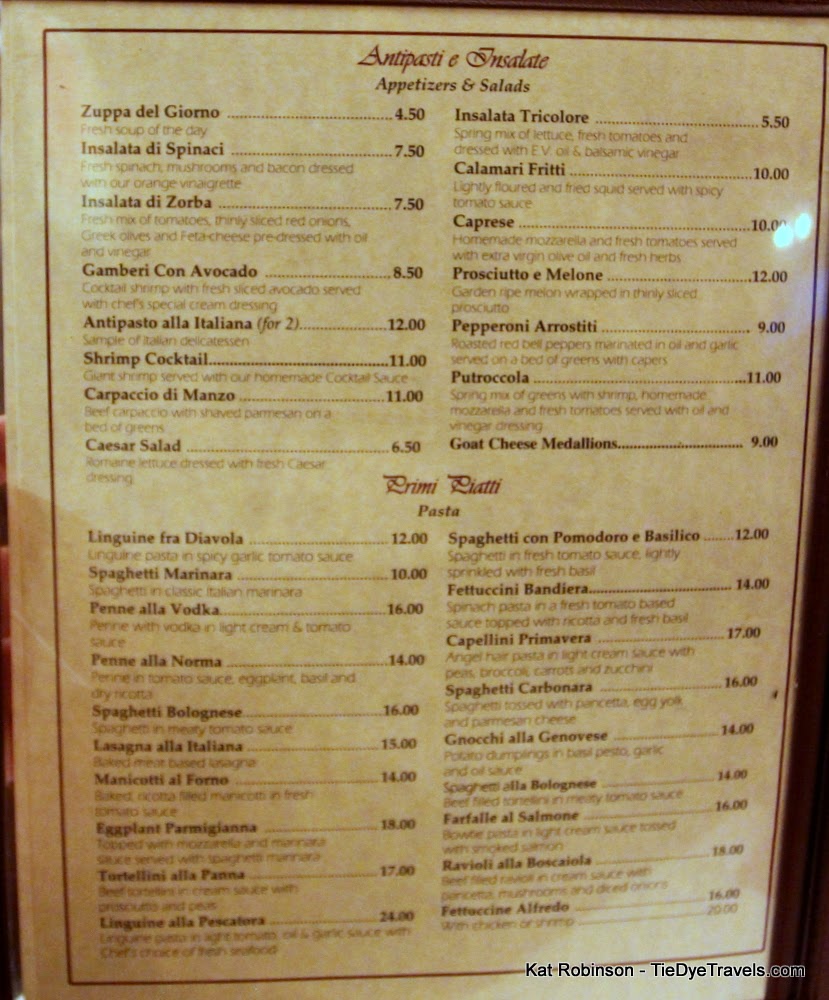 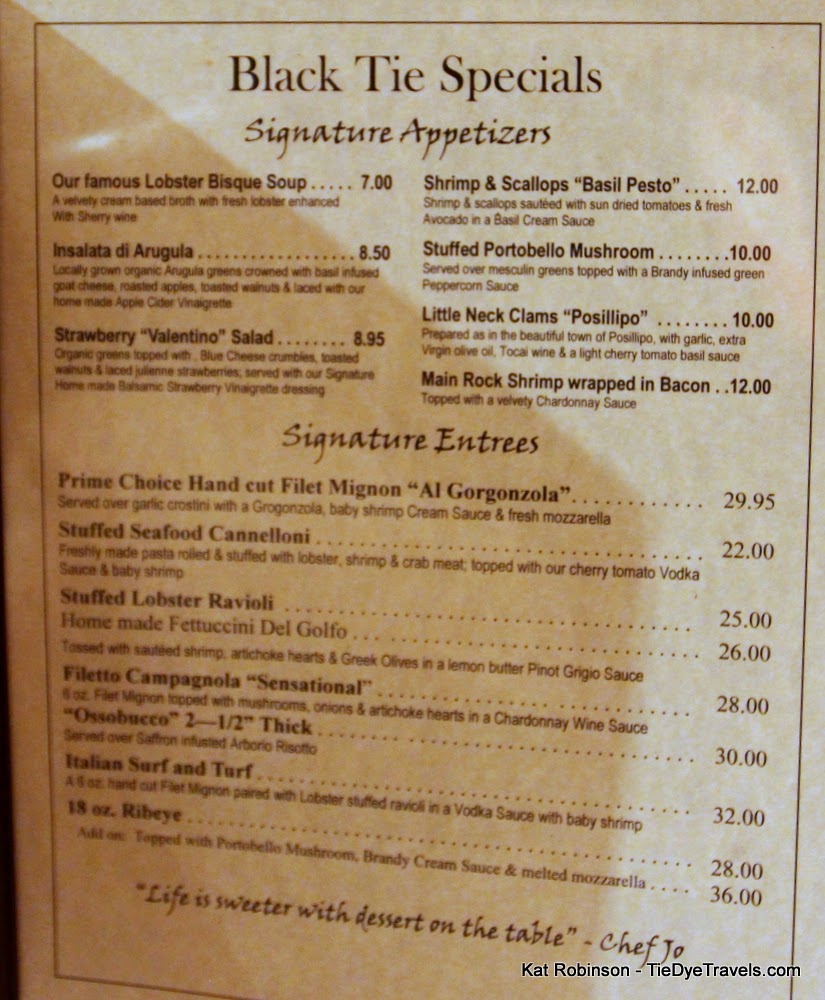 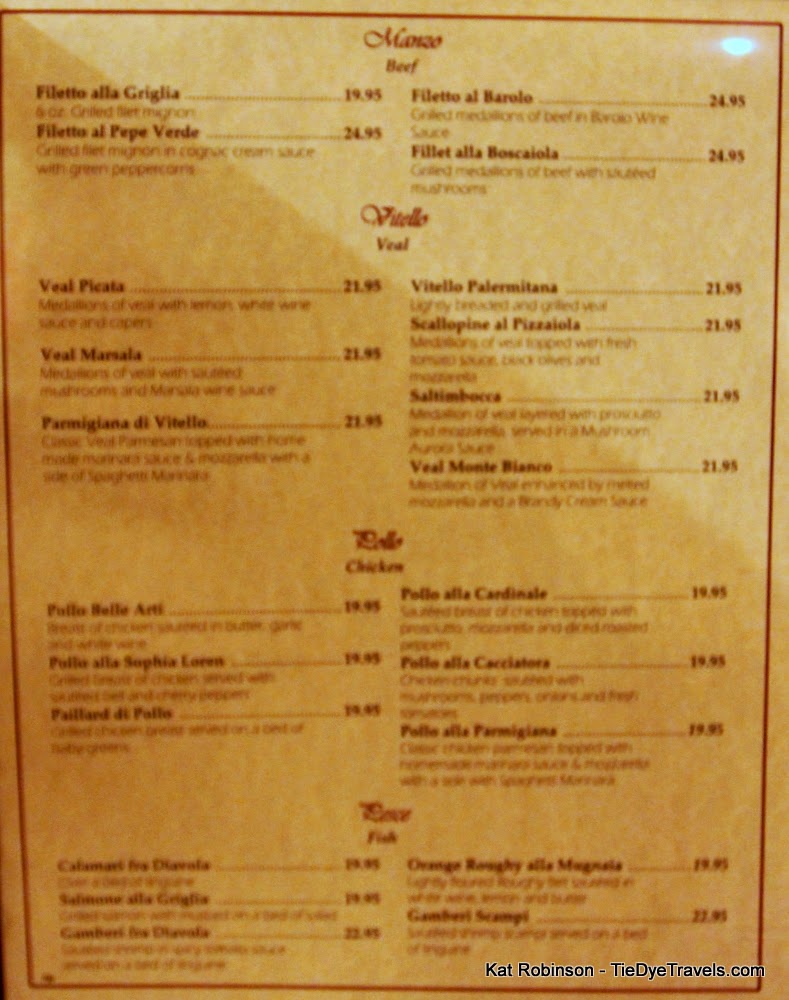