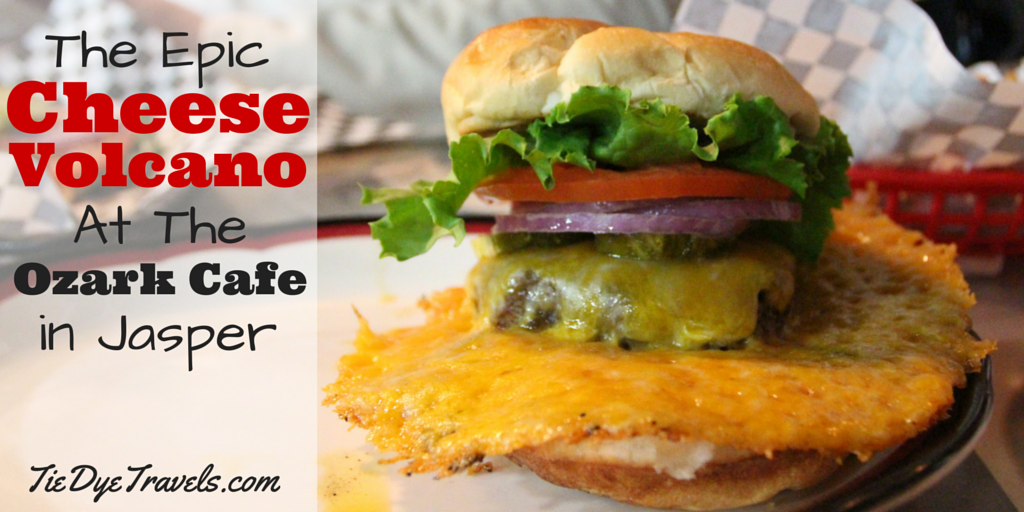 A good story will take me interesting places, and sometimes it'll bring even more stories to my attention.  And sometimes, the journey to the story itself is worthy of its own tale.

I've been painting my dining room and kitchen this week, but when I had an opportunity present itself for a good article, I jumped at the chance, rounded up Grav and we headed north and west to procure the piece.  Thing is, we'd happen to do this on a rather overcast, dank Thursday.  We almost threw the GoPro on the car at Russellville to record the journey up Scenic Highway Seven, but realized that it was already nearly 4 p.m. and sunset was at 4:15. We traded out so I could make the curvy part of the drive to Jasper.  Our intention was to head to the Low Gap Cafe before settling for the evening at The Hub at Marble Falls. 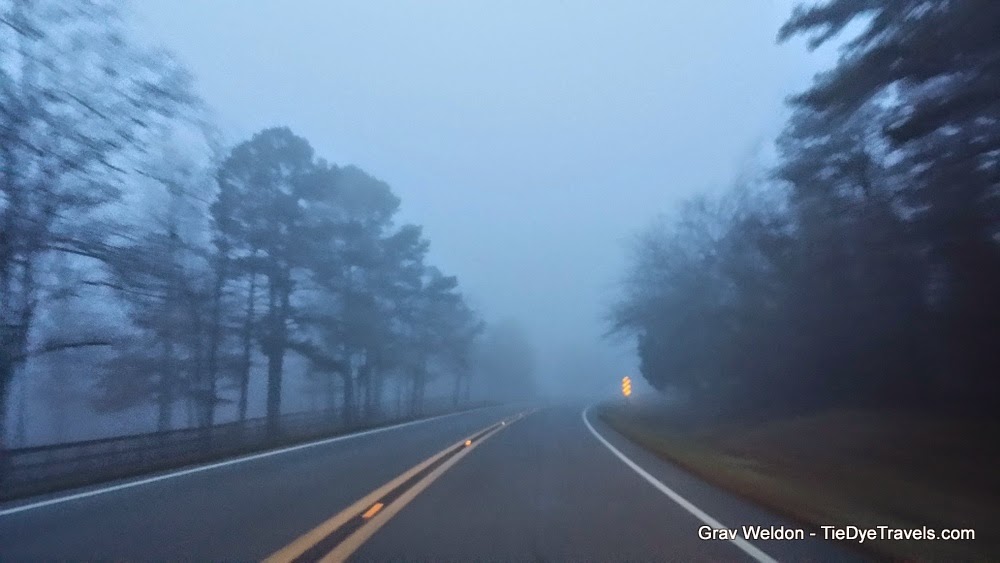 When we switched at Dover, it just looked wet and dark.  We weren't even to Big Ben's before the fog started to drop.  And I mean drop.  By the time we passed Mack's Pines we couldn't see Mack's Pines, just the sign, and I barely even caught a glimpse of the red and white of Booger Hollow (in a construction zone, mind you) before we were into the thick of it.

It was bad.  Periodically we'd see a little light shadow coming towards us in the dark, a car coming from the other direction that would loom quickly into view and then disappear behind us.  All traffic seemed to be going south; I'm guessing we were about the only people out crazy enough to attempt Jasper in this sort of weather.  Visibility dropped to 40 feet, 30 feet, 20 feet, and I just prayed no one was coming up fast behind us and that our tail lights were bright enough.

Rotary Ann was a single collection of glowing golden lights to our right as we peeled slowly through the thick blue fog.  After the building there, nothing could be seen except a hint of the railing and the endless fog beyond its lookout point.  We curled around and past and over.

From time to time, I'd get nervous about the right edge and nudge the rumble strip that runs along most of Scenic Seven's northward leg between Dover and Jasper.  There was the occasional dog that would be seen on the pavement itself, and I found myself wondering what home it should have been in, rather than risking its life on the asphalt.

There's an old vista on the east side of Seven not far from the top of the ride, normally offering a view of the Arkansas Grand Canyon, but outside of a break in the guard railing and a sign, it could have fallen off into space for all I knew.  Four does crossed in front of us right at the little roadside park at the crest.

About the time we passed the Cliff House Inn, we got a guy behind us who hugged my bumper for ten miles or better, making it even more difficult to see.  For the life of me, I could not imagine what possessed this individual to try to crawl into our backseat.  After all, visibility was all but gone at this point.  The bright lights sure didn't help.

We eventually got to a point where the big lug passed us, and once again we were swept into the dark, nothing but the headlights and the occasional light in front of a home to see.

That's when we saw the owl.  I don't recall seeing too many low-flying, cruising owls, especially in foggy weather like this, but we barely missed him as he majestically swept ahead of the windshield.  Grav and I discussed whether it was a white owl or a barred owl as we continued to climb.  At Scenic Point, we barely glimpsed the sign; the old-fashioned bright yellow light was about all that was clear, and the tower was nowhere in sight.

And then the descent... the tight, curving section of Scenic Seven littered with big signs urging truckers not to go faster than 15 miles an hour and giving notice of the runaway truck ramp ahead.  We curled down with brakes on, the road slick, the pavement shimmering...

And about the time we got to the Newton County Fairgrounds, the fog was gone, a low ceiling of cloud above.  Around a curve, we started to see hundreds, thousands of dots of white and orange light from below.

The last curve and onto the flat into Jasper, and there was a police truck with its lights on.  I figured out what was going on in seconds, but even after I mentioned it to Grav, he voiced disbelief.

"Do you know how many nighttime parades I marched in when I was in college and high school?  I'm telling you, it's a parade."

I rolled down my car window and we heard the strains of a marching band.  "It's a parade."

The young man in the police truck had stepped out to walk the line of cars that had formed behind us.  I asked him and he confirmed.  "Yes ma'am.  It just got started."

"Could we pull in over there?" I asked, pointing to the full service Conoco station closed right by where we had stopped.

"Yeah, get yourself a good place to watch!" he agreed, and we pulled on in.

Grav pulled out his phone and grabbed a few shots, still incredulous that there would be a parade at night.  It was six o'clock on the dot.  We knew we weren't going to make it to Low Gap Cafe. 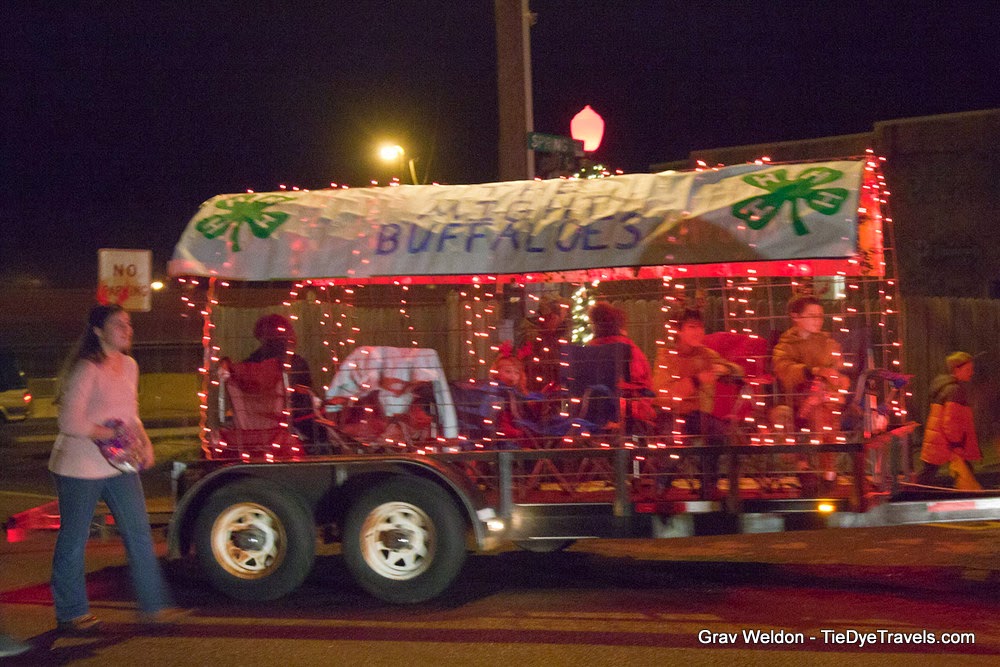 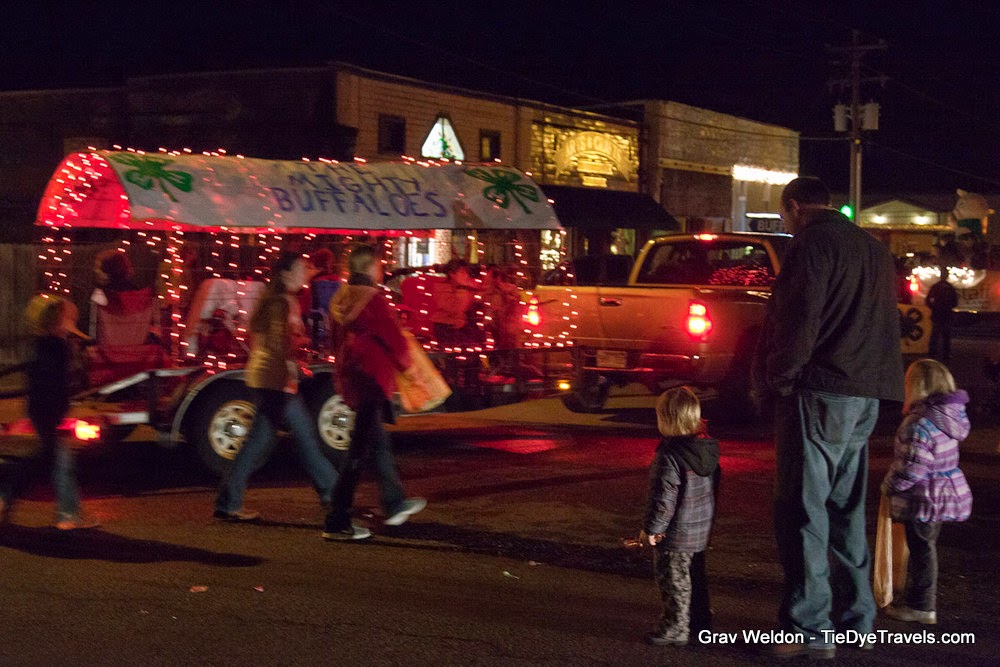 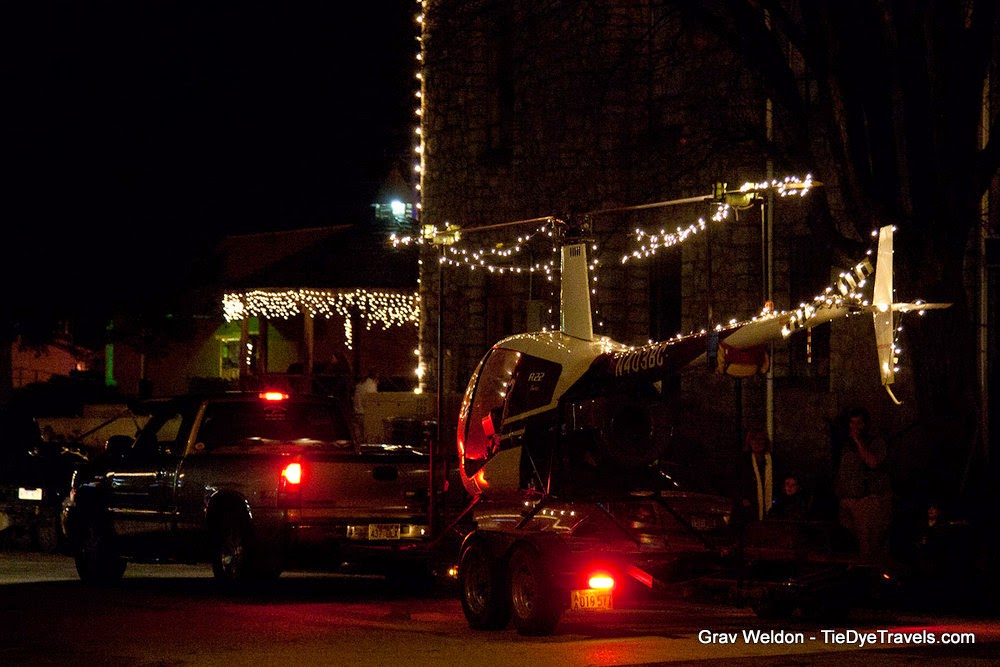 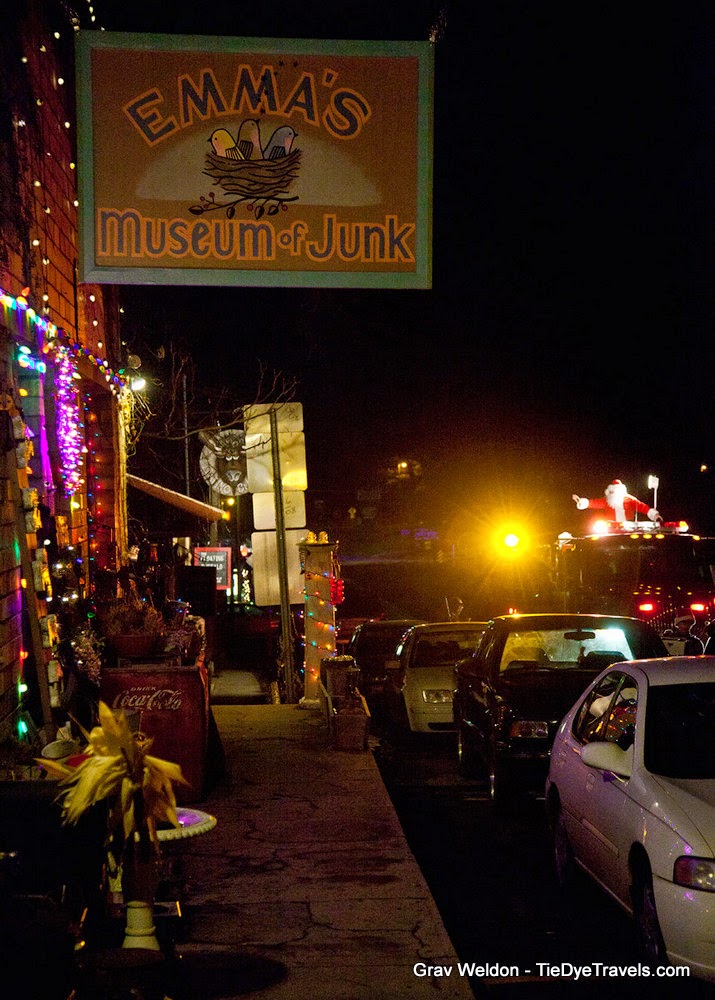 And let me tell you what... I have been to big parades and small parades, celebrated functions like the World's Shortest St. Patrick's Day Parade and the Big Jingle Jubilee.  And I have never seen any crowd as happy as this one for the Buffalo River Christmas Parade. We saw all sorts of crazy floats with fireplaces, wagons, even a helicopter.  There were motorcyclists with lighted bikes and people on four-wheelers, and Santa came through on a fire engine.  And every float had people on it throwing candy to the masses.  I even heard one guy comment "man, this is better than Trick or Treat."

Once the mules and horses at the end of the parade passed, I drove around the backside of the square and pulled up by the old jail.  We walked to The Ozark Cafe, Grav stopping to shoot the parade that was now passing in front of Emma's Junk and Antiques and the courthouse.

We managed to make it inside and got to looking at the menus before the crowd came through.  We quibbled over what to order... I think we both were intrigued by the idea of the Cheese Volcano, which was purported to be a pile of cheese melted on top of a half pound burger patty.  I managed to talk Grav into getting the Blue Cheese burger instead so I could enjoy the Cheese Volcano myself.

I was happy to see a few things -- such as the Best Breakfast in Arkansas placard from when I did that story in 2010.  There's been some changes, and the booths that were once in the front window aren't there any more (I bet they're in another section of the cafe).

We got onion peels first, and they were marvelous, and then out come our burgers.  And this?  This is epic. 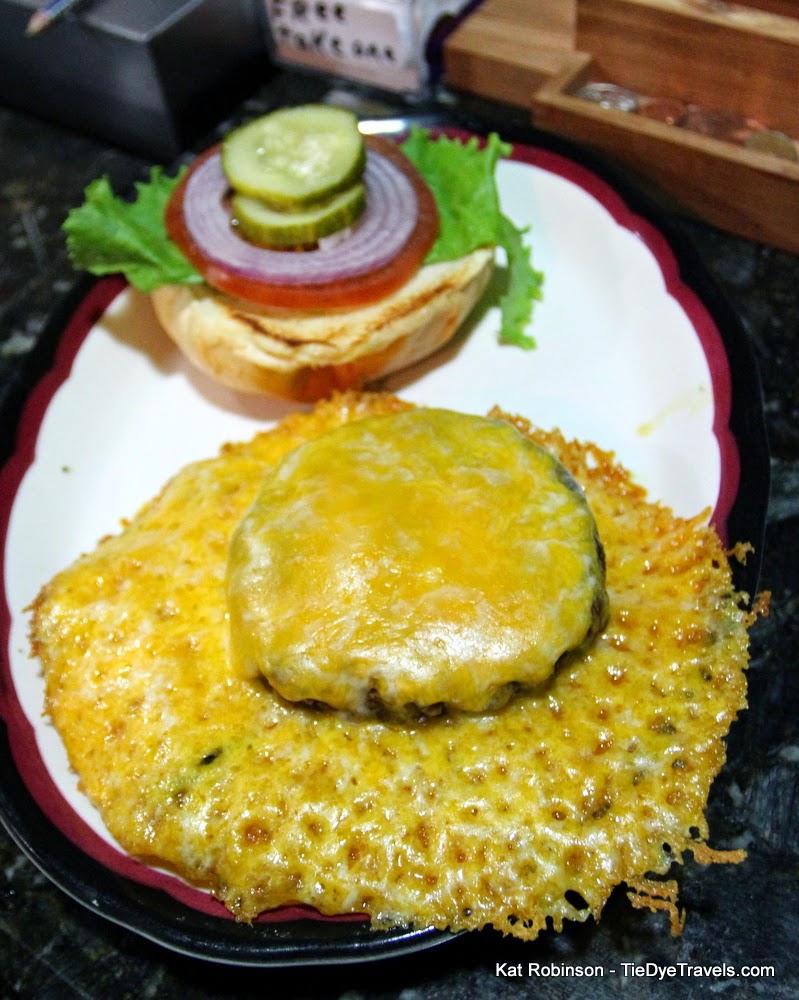 Yeah, that pile of cheese advertised melts onto the griddle, making griddle-cheese-cracker goodness all the way around the thing.  It's just kinda amazing. 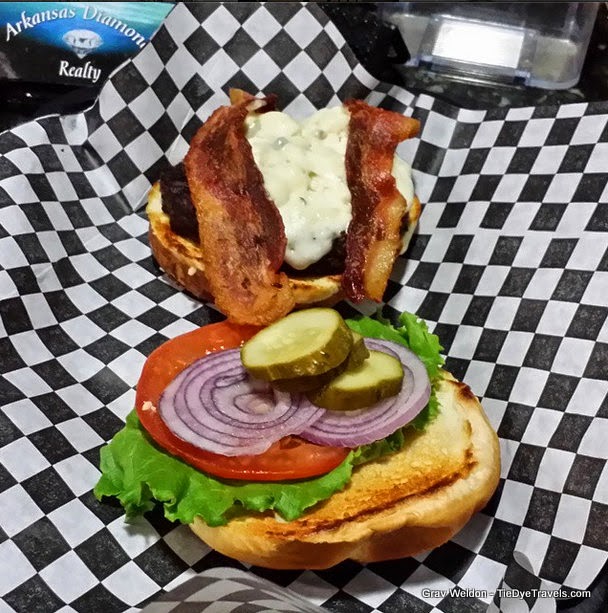 Not that Grav's burger was all that bad -- he added bacon and got himself an amazing piece of work.  But mine was EPIC. 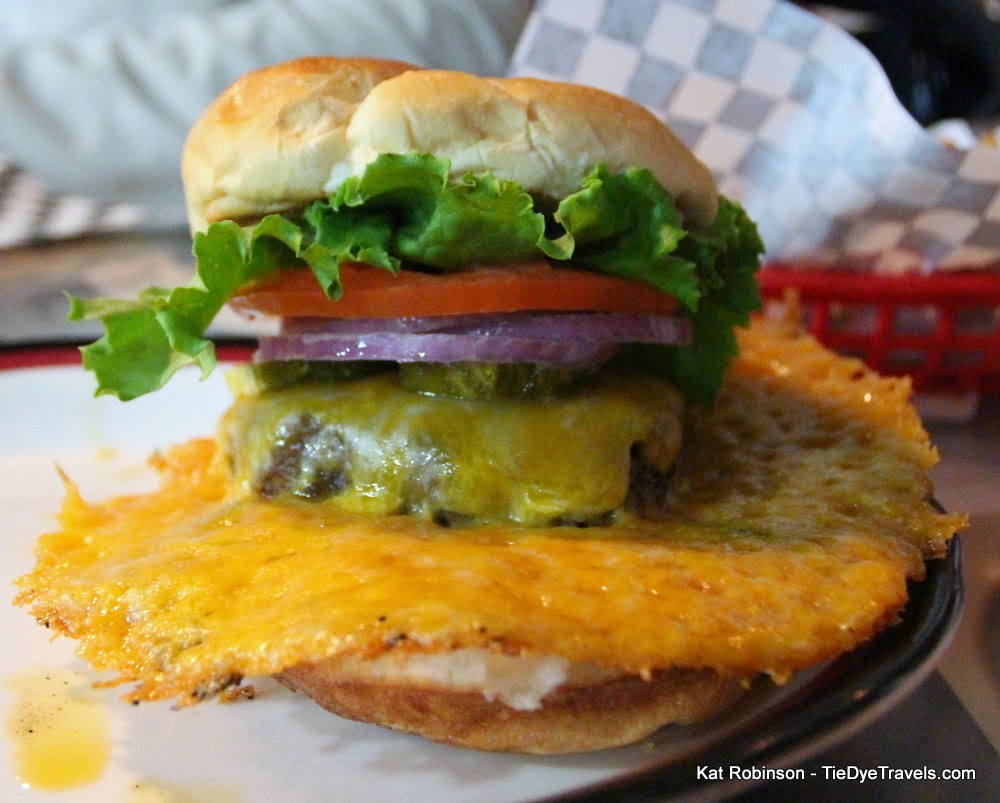 So epic that I had a hard time eating it.  I finally resorted to a fork.

Let me point out that this is my third different epic burger at The Ozark Cafe.  My first was the Deep Fried Burger, which I had in May 2008 (I was pregnant, it sounded good).  The second was the Excaliburger, which you might recall seeing on the back of Classic Eateries of the Ozarks and Arkansas River Valley.  Grav and I tried that on our first trip together in July 2010.

There are more epic burgers on the menu, I suspect, including the Firecracker Burger and the Ozark Pounder.  But they'll have to wait for another time.

We managed to peel out of there about 7:15 and made our way to The Hub, where Randall and Debbie happily welcomed us.  Today we have a great adventure ahead.  And the good news is -- though there's fog, there's light, and let's just see what today brings.