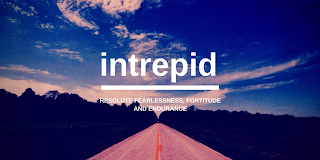 Jacqueline Wolven has challenged the circle of Arkansas Women Bloggers to come up with a word for 2015, a single word to color what comes ahead. When she first posted her thought, I chose the word audacity... but audacity has two meanings, one strong and one annoying. So I'm clarifying.

My word this year is INTREPID.

The word has been used to describe reporters frequently, especially the intrepid Lois Lane of Superman fame. It's also the name of a series of Starfleet ships in Star Trek... fellow geeks may remember Spock sensing the demise of 400 Vulcans on the NCC-1631, or the NCC-38907, which responded to the Khitomer disaster... but most of you probably are shaking your head at my references...

I didn't start this journey fearless. I was scared to death back in September 2007 -- leaving TV with no job, few prospects and no real idea of what I was going to do next. But over time I lost a lot of that fear. I learned that I could think on my feet, support myself and create opportunities. For four and a half years I built on the idea that travel writing was the only thing I'd ever do.

Still, fear crept into my life. I took a job in 2012 and stayed with it for two and a half years, partly because it was the safe thing to do. Indeed, a steady, regular paycheck with benefits seemed smart. But I lost something along with it. I lost my freedom.

I took up the audacious flavor of my life again this past August, leaving that job to cobble together once again a life as a writer on the road. This time, I have no net, no spouse to fall back on, no set assignments to chase. But I do have three books and a blog and I think I have enough interest from readers to make this work.

This year I resolve to be intrepid, to lose the fears that every freelancer grapples, to step out and accept the challenges and share the stories of the world around me, to entertain and inform hospitably, to cheer and remind and enthrall readers. The time for doubts is over. I have done this before. I can do it. I will do it.
To purchase this article, email Kat Robinson at 12/30/2014 01:02:00 PM