On Sunday, December 1st, I was allowed to once again be a judge in a epic battle of pie-making... the 2nd annual Say It Ain't Say's Sweet Potato Pie Contest at the Mosaic Templars Cultural Center Holiday Open House. And what an open house it was. 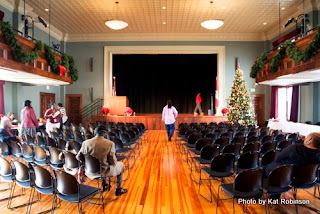 When I arrived, set-up was still underway. I love walking into the auditorium on the third floor of this building. It's been beautifully recreated. See, the original structure burned several years ago, but five years ago the reconstruction was complete, and today the facility hosts a museum with changing exhibits, a bookstore, meeting and learning spaces and this magnificent auditorium with balcony seating. 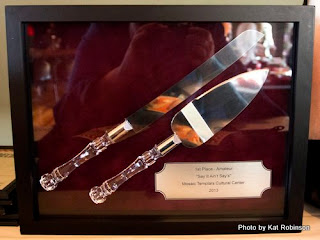 The prizes were on display -- a collection that included aprons and these fine boxed pie sets with the date and event inscribed on a plaque.

Many of the competitors already had their pies out and were working to set up for the public tasting.  A selection of those pies:


So, a pie contest.  What's up with this?  Last year when coming up with ideas for a celebration for the holidays, the folks at Mosaic Templars Cultural Center decided a fantastic way to celebrate was to add a little pie.  What makes it sweeter is WHO they decided to honor -- Robert "Say" McIntosh -- the political figure, community activist and amazing pie maker whose sweet potato pies are of legend here in Little Rock.

The contest has a popular choice winner -- and the panel of judges chooses a first and second place in both amateur and professional categories.  It's hard work!

For the crowd - the best way to try them all is with just a bite.  With more than a dozen different pies out there, you have to pace yourself.  This is a good idea for judges, too.  This year, the competitors had their A game on from the get-go, carving out pies into spoon-sized bites easy to pick up and share.


This certainly wasn't an easy competition to judge -- with so many worthy pies.  But the crowd was friendly, the pies were all marvelous, and we were treated to the likes of the Central High Madrigals...

For more information on the Mosaic Templars Cultural Center, please check out this website.
To purchase this article, email Kat Robinson at 12/02/2013 02:00:00 PM