A generation of Fort Smith diners enjoyed home grown dinners and great pies at Goodson’s at Cornerstone. Starting in 1986, the restaurant served up Kickin’ Chicken, pot roast burgers and other comfort foods six nights a week, along with some fantastic pies. A second location, Goodson’s on Towson, was opened and found equally as worthy. 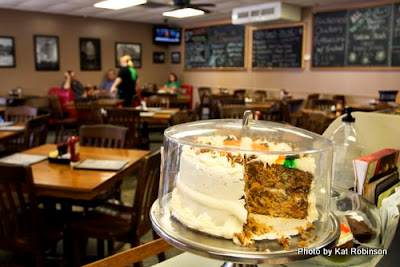 But in 2011, the restaurant scene on the Western Wall was in an uproar, and for some crazy reason the Goodson folks decided they wanted to do something different. After 25 years, they sold off both restaurants and opened Goody’s, a yogurt shop, which honestly flummoxed a whole lot of people. Fortunately, someone stepped in. Or some place. Ted Cserna, who owns Ed Walker’s up the road from the Towson location, bought the place, borrowed some pies and both places have done well for it. And thus was born Miss Anna’s on Towson.

Miss Anna's, by the way, is named after Ted's mom. It’s a lunchroom, yes, within a very non-descript brown building that shares a parking lot with a nightclub.  But it's open every day and it's consistently good.

Inside, the restaurant's tan walls are decked with historic photographs from Fort Smith, and the top of the walls are bordered with license plate advertisements.  The booths are brown, the tables are wooden, and there's not a whole lot else to say -- except about the dessert case. 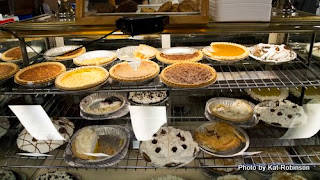 And I'm certain there are some individuals that only know Miss Anna's (like Goodson's before) for the desserts -- cakes, cookies and pies and pies and pies.  Fruit, cream, meringue, chocolate, lattice, gluten-free, every sort of pie you can imagine has been spotted in that pie case.  My most recent visit, I counted amongst the offerings the following great circular delights:  sweet potato, pumpkin, pecan, chess, egg custard, apple, blueberry crisp, chocolate pile, Oreo, French silk, chocolate meringue, coconut meringue on coconut crust (gluten-free!), lemon custard, lemon meringue, peanut butter cup and coconut cream. 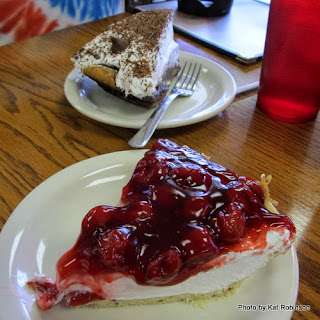 And that's just a late-autumn reckoning.
I've gone in late summer and encountered peach cream cheese, blueberry, blackberry, fresh apple... get the picture? Above the pie case is a cookie case with everything from peanut butter, M&M and chocolate chip to fudgy no-bakes and sprinkle-sugar cookies.  And there are always cakes on the counter -- chocolate, white confetti, lemon, spice, apple, German chocolate, carrot... and I understand ice cream is also available. 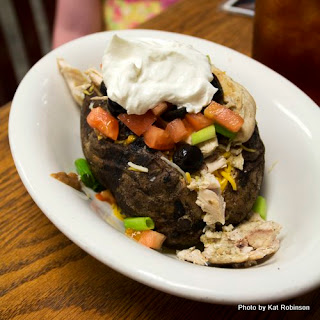 So, I've told you about the sweet stuff.  But I've never mentioned some of the other things -- such as the famed Kickin' Chicken, held over from the Goodson's days.  It's bits of hand-carved hand-battered and fried chicken dipped in a special sauce that's somewhere between Zaxby's Zauce and a bona-fide Buffalo sauce... and it's still a hit.

The chicken fried steak is good... as is the prime rib, which is only available on Friday nights.  I even like the burger.  And up until recently, I was getting into a pattern of ordering the Fajita Potato -- a potato stuffed with chicken fajita strips, tomato chunks, green onion, black olive, shredded cheese and sour cream.  That is, until now.

See, the nachos look lovely... but I don't do tortilla chips any more.  This last visit, with the thermometer dipping and sleet forming on my windshield, I wanted a hearty and warm meal that'd stick with me a while.  So I asked for the combination super nachos with French fries instead -- and thus was born... 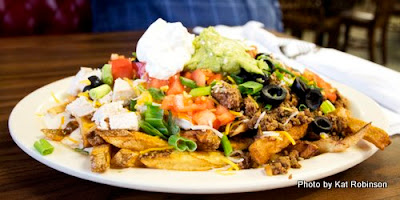 That's right, I have now been credited with creating a dish at Miss Anna's -- and here it is:  hand cut fries, topped with three types of cheese (cheddar, mozzarella and queso), ground beef and chicken fajita strips, tomato chunks, green onions, black olives, sour cream and guacamole.  The only thing that could have made this any better (read: deadlier) woulda been chili -- and I just didn't think of that first. 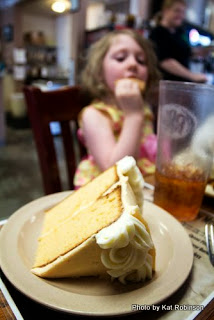 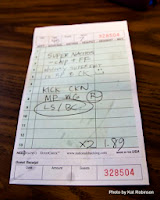 You want to visit? If you’re not familiar with the town and are coming in from elsewhere, best way to get there is to take I-540 to Zero Street, go west and then go with the curve when it curves onto Towson. It’s a few blocks down on the right. (479) 649-6300.

Two more things -- Miss Anna's has an active Facebook account, where you can see what's special tonight. And every Tuesday is FREE PIE TUESDAY. You're welcome!
To purchase this article, email Kat Robinson at 11/30/2013 07:00:00 PM