The Girl on the Bridge.

I thought it was all about the ride.

When I was a young girl, I went many times to Dogpatch USA. The straight stretches of Interstate 40, though new, bored me but I always loved getting above Dover. The vehicle was a car on the best roller coaster ever, one that went longer than a minute and a half and that took me marvelous places… to Booger Hollow and the little burg of Jasper.

I always knew I was close when we crossed the Pruitt Bridge over the Buffalo National River. We’d pass the A-frame cabins of Little Switzerland, climb around a mountain, curl down into the valley and coast across the old steel frame bridge. Once the bridge was crossed, I’d put away whatever tablet or game or book I’d had in my lap, knowing that just a few curves away was Dogpatch.

At 17 I started at Arkansas Tech University. Weekdays were for class, Saturdays for marching band… and Sundays? They were mine. And I found myself in those years hitting Highway Seven… which was soon designated Scenic Highway Seven… found myself sliding past Dover and climbing into the mountains, sometimes stopping at Rotary Ann, sometimes at this overlook or that… taking the hard right downtown in Jasper and then out and up… and coasting over the Pruitt bridge, that sign that Harrison was about 20 miles off, the turnaround where sometimes I’d grab lunch at the Hi-Boy and sometimes I’d eat at Master Chef before heading back down into the valley and Russellville. 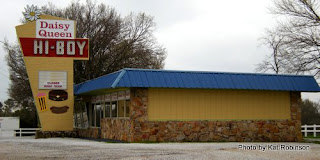 Dogpatch USA closed, and the next year I graduated and moved away.

Twelve years later I’d venture that way again, one October afternoon in 2007 when I went to learn the fate of Booger Hollow. I found it closed. When I got home I wrote the story… on a brand new blog. This one, of course.

That trip sparked in me a desire to chronicle Scenic Highway Seven. I wanted to capture what I found special about it, this ride through the mountains that had held so many memories. I started collecting stories, photographing the drive each time I went.

I took the drive up and back in April 2008… with the thought that I was expecting. There was a lady in a flea market along one curve that told me I was… just by looking at me. And she turned out to be right.

That time, I coasted over Pruitt Bridge, pulled over and looked back. This is what I saw. And I knew I wanted to be on that road on the bridge. But not that day.

The next ride, the next month, I finally satisfied my curiosity and stayed at the Little Switzerland Cabins, unplugging from the world in an A-frame that overlooked Scenic Highway Seven with a comfortable bed and a fridge full of juice and absolutely no cell phone signal at all. I had to clear my mind a bit. After all, Hunter was on the way just at a time when I was just getting my start on the road… on this path, this path of being a writer. What was that going to mean for me?

It meant… that a year later I’d be driven by my husband over that bridge, infant in the back seat, to do a story in Jasper. Hunter had slept the entire ride from Little Rock to Harrison and back down to Pruitt, where she woke as we crossed the bridge and started to holler.

The old bridge has been around 82 years. It was commissioned and built in 1931, one of four Pennsylvania-truss style bridges still remaining in the state. The old green bridge crosses the nation’s first national river… below it, during the warmer months, kids and adults play in the water, while in spring you’ll see canoes and kayaks passing by.

It has been a landmark in my memory my entire life.

It was more than 100 degrees when I stepped on the bridge on foot in July 2010. I was working on a story for Arkansas Wild, a multi-faceted story I’d been meaning to tackle for some time and had finally found a commission to write. It was also my first trip with photographer Grav Weldon. While we were collecting stories, I mentioned my desire to walk the bridge, and he photographed me there… an image that has become iconic in my life. My friends told me it needed to be the cover of my book, whatever book I ended up writing one day.

That was three and a half years ago. I could no more have told you that I’d have two books under my belt then than anything else. Indeed, my life is so very different these days.

I left life on the road behind at the end of 2011 for the sure thing of a day job. Hunter started school soon afterward. I’ve gone through a lot since the day I walked the bridge… divorce, publication, growth, survival. Hunter has grown into a tall girl of five.

I still find excuses to cross the bridge… for research, for stories, for the fun of it. I’ve crossed after ice storms that ripped branches from the trees. I’ve crossed in the fog of early September mornings.

April 2013… the story came… the Pruitt Bridge is being replaced. The Arkansas Highway and Transportation Department was looking for a buyer – but have decided to instead just build a new bridge alongside and close the older bridge to all but pedestrians.  82 years is a long time for a bridge, especially along Arkansas’s longest state highway.

But that’s neither here nor there.

The thing is, 2013 has been a very full year, very busy. I look back and see how packed it was, how every single moment seemed to be bursting with things to do, so much time in motion.

I’ve been rather ill this past week, with one of the worst colds I’ve ever caught. I’ve been too out of it to concentrate on writing, or even just mindless TV watching to be honest with you. It’s left me with a lot of time to think.

I’ve done a lot in my life… a lot of big jobs and a lot of big events. But I have been my happiest when I’ve been sharing stories of where I’ve been and the people I’ve met… oh yes, the food I’ve tried as well, but not so much. I’ve wanted to share what is now and what was… so there will be some record of these things for the days to come.

And I realized something. I am the girl on the bridge. I have told the stories about the chances I’ve taken and the adventures I’ve had… and that is more me than anything else.