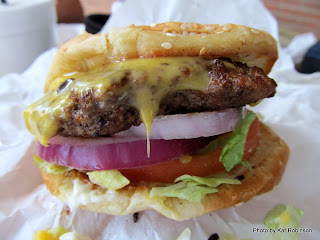 A reader’s recommendation took me out to Lonoke for a bite -- out to Tidwell’s Dairy Bar, a community standard. It’s been there at least as long as my contemporaries recall, and it’s been highly recommended as a burger joint.

Now, it’s a dairy bar, not a bar bar, so there’s no alcohol. No dining room, either, just a smattering of picnic tables. There is a pretty large interior... and considering all the different things on the menu like salads and catfish and stuff, I had to agree -- the room inside was justified. 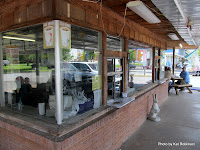 Fortunately, it was one of those perfect spring days where the thermometer was just touching 80 degrees at one in the afternoon. We pulled up and headed for one of the two service windows, looking for burgers. 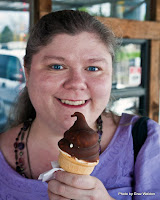 Cheeseburgers were definitely on our agenda, but a quick glance at the menu revealed a childhood favorite of mine -- a brown derby for just 99 cents. I ordered my chocolate dipped cone when I ordered my meal and enjoyed it first. There’s just something about smooth and creamy soft serve encased in a chocolate shell that’s perfect for eating outdoors. 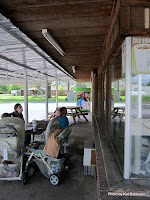 Our hot items would take a while to prepare, so we found seating over beside the restaurant. We enjoyed our ice cream and watched other customers: a couple of women who apparently walked over with their small children in strollers; a group of three blue collar workers taking a late lunch; a man and his young daughter and her tiny puppy. It was a varied crowd. 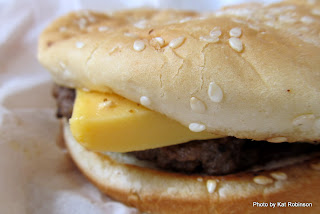 Our orders came out in the order they had been received. The first, one of my dining companions had chosen a cheeseburger with nothing but pickle and ketchup, “junior burger” style. His burger basket came with French fries and cheese dip. The fries were thick and 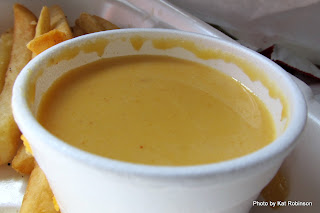 substantial but not out of the ordinary; the cheese dip served with the fries, was. Cheese dip and fries is a favorite of mine! And they worked well together, though the dip was just a smidge runny to go with the fries. It was a Velveeta-type dip, though the tomato or Rotel within had apparently been pureed so that only the 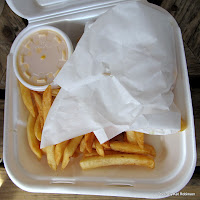 slightest bit of tomato matter was still cohesive. It was spiced with chili powder, and I believe there was an element of sour cream in its making. A nice dip I’ll have to add to the Arkansas Cheese Dip Primer.

His burger came with a slab of processed American cheese, likely Velveeta or one of its substitutes, apparently hand-cut. As he knoshed his meal I grew more hungry for my own. 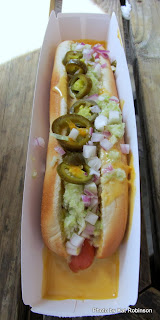 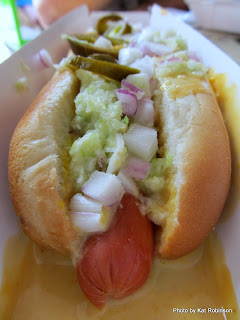 My other traveling companion had chosen a footlong dog with the works, minus chili. We were glad for this -- we were on a long car ride and beans... well, beans just didn’t need to be part of the equation. The footlong came with a sweet slaw similar to KFC’s but chopped much finer. It came topped with that slaw, finely chopped red onions, sliced jalapenos and a slathering of cheese dip. The combination of ingredients produced a complex flavor, very wet on the bun. It was indeed a fork-and-knife footlong. The weiner itself? About average.

So I had been waiting all this time, and finally my burger basket was done. And as I opened it my heart raced with joy -- or anticipation of the cholesterol it was about to endure. The third-of-a-pound patty was nicely smashed and charred, a lovely bit of caramelization apparent on one bare edge. Every other edge was consumed with a copious amount of melted Velveeta-type cheese. It glued everything together -- the lightly toasted sesame seed-encrusted bun, two big ring sections of red onion, a handful of dill pickle slices, a hearty slice of tomato and some hand-shredded lettuce. The default condiment, mayonnaise, was barely apparent thanks to the slathering of cheese. 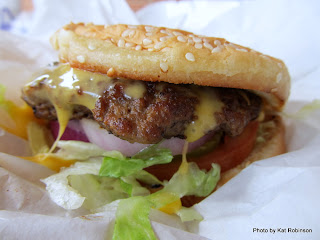 Thank goodness for that wax paper binding -- since without it my hands would have become coated with all that cheese. It was everywhere. And even though I am not usually a proponent of pasteurized processed cheese, it worked here. The meat was salted just enough to complement the cheese and other components, and there was just a hint of black pepper in it.

I ate the entire burger and got about halfway through my fries. I found the best method for those was to wait until the cheese dip developed a light skin and then pick the skin up with a fry. That happened quickly on the windy day.