Burger joint of the week: The Spot 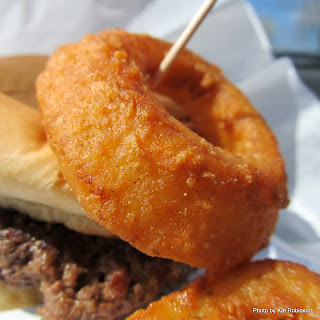 I grew up in southwest Little Rock. During the week, it was the central portion of my world. I went to Geyer Springs Elementary, lived off Gum Springs and had friends that lived from about where I did out down south to far out on Arch Street.

Now, we’re not talking about the downtown portion of Arch Street that passes some of the most important real estate in the city. We’re talking Arch Street that used to be “out in the county;” i.e., the area beyond the gravel operations. Arch Street did and still does meander from 65th Street down past Baseline and way out to the edge of the county, through some of the more scenic rolling hills and timberlands.

Most of the businesses that lined the thoroughfare in the 70s and 80s have dried up and disappeared, but one place we grabbed many a milkshake at still stands, changed very little since those times of my youth. That’s The Spot. 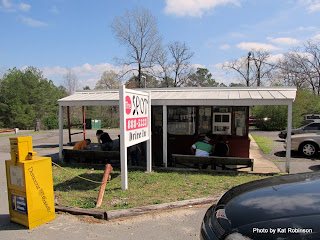 Indeed, people still hit The Spot to this day, as I did one day this week, just to see if the place was still serving up shakes and burgers like it used to. It was a remarkably warm March day with temperatures nudging 80, and as I pulled up I discovered finding a parking spot would be a challenge. There were more than a dozen cars on the lot.

That’s saying something for a place with no indoor seating and very little outdoor seating. In fact, the only places to sit besides the ground are on one of two weathered benches (assumingly reserved for people waiting for their orders) and a couple of picnic tables way off to the side. It’s a red building with two windows, a pull-up and a sign out front, situated on a gravelled lot. And it smells like burgers when you drive up.

I found my parking spot, got out and went to the front, where I was able to walk right up to the window. There were at least a dozen people quietly waiting on their orders, some in cars and some standing around. Numbers were called, orders were collected and people left. Other people came. 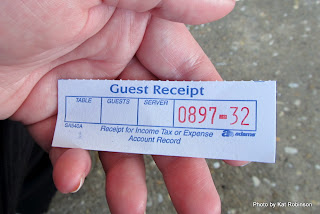 I barely glanced at the menu, just ordered a Jumbo Cheeseburger ($4.05), onion rings ($2.30) and a small Pineapple Shake ($2.25, medium $2.85, large $3.35). I walked around in the spring air, took some photos and looked around. Outside of the new sign out front and the new paint job (which is probably a few years old), nothing had really changed.

Not even the menu. It’s still burgers, a chicken sandwich, a steak sandwich, barbecue sandwich (the sort that comes from a bucket) and ham sandwich. They still sell chicken and fish dinners, too -- though no one I saw that day ordered one. They still do a taco salad too, and nachos, and a super salad with all sorts of stuff on it. I think they’ve added the cheese sticks and stuffed peppers in the 20 or so years since I last dropped by, though.

While I was waiting, a woman went up to one of the windows and asked if they had steak sandwiches that day. She ordered it with a large banana shake. 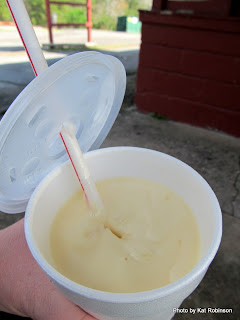 Right after she’d placed her order, they called me to come get my pineapple shake while they finished the rest. My small shake was 16 ounces (medium is 20, large 24) and thick, but not too sweet, a blend of soft serve and canned pineapple. I was really ready for that. I wish I hadn’t given up cola for Lent, because they do fountain Cokes there and they add cherry or vanilla or both if you want them.

Wasn’t too long until my number was called. I took my bag and headed for the car, there to unwrap my spoils and check out the consumables. 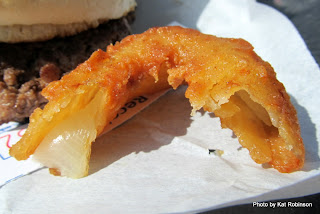 What I discovered was a large wax paper-wrapped bundle of onion rings that had been set closed with one staple and a wax paper wrapped burger secured with a toothpick. The onion ring bundle was huge, larger than the burger and heavy. The onion rings inside were thickly battered and deep golden brown. The onion bits within that battered coating were translucent and soft, pliant and juicy. If I could fault them anything, it would be that they could have used a touch more salt -- but then again, I could have asked for ketchup to dip them in. That would have worked, too. 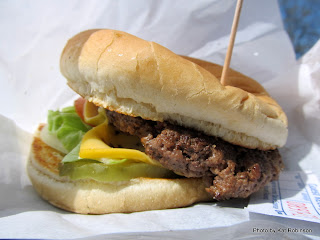 The burger... a half pound griddle smashed patty with an impossibly crispy crust. That’s right -- the surface of the burger was crispy, as if it had been cooked in a perfect layer of grease on a hot griddle. Which, I’m sure, it was. Surprisingly, it was very low on seasoning, with just a hint of salt to it. But the beef was high quality, which made all the difference.

The barely toasted top bun rested directly on top of the patty, which was oval-shaped and quite certainly hand patted. Under the patty, in order: a slice of American cheese, ridgy dill pickle slices, a tomato slice, iceberg lettuce, very fresh white onion and a slight slathering of mayonnaise. The bottom bun was buttery toasted.

Even without mustard (mayo is the default), this burger retained a tartness in its complexity, thanks to the liberal application of the pickle slices. Furthermore, it had a nice meaty bite to it, with a strong assist from the pungent onions. The cheese was just overwhelmed -- though I suspect that has something to do with the lack of meltage. 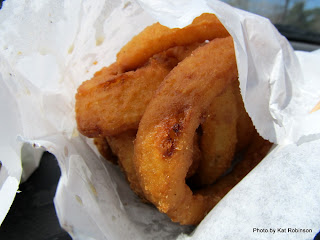 All in all, a good burger. And the rings were good, but I could not finish them -- not because they lacked in their goodness, but because of their plentitude. There were easily a dozen big fat rings in that wax paper.

The Spot has been on Arch Street there for more than 50 years. It has a steady clientele and a lot of character. Glad it came to mind the other day... that’s the good kind of trip down memory lane.