Burger joint of the week: Lulav, a Modern Eatery 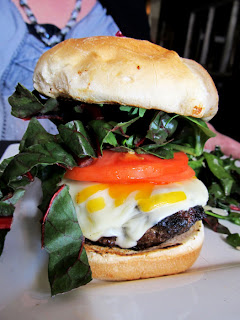 The Cheesy Wheesy Burger at Lulav is pretty darn good. However, I don’t think I’ll be going back to eat there for lunch on a weekday. And I’ll tell you why -- on the jump.

It’s all a matter of timing. I have in the past been quite patient with waiting for my meal before at different locations; being my own boss meant I made the schedule and I could budget extra time to go eat lunch and shoot the food.

But now that I have a “real job” (as I have been told; this is not the time or place for that particular rant) I have a limited lunch hour, and I don’t have wiggle room. I make up for that by looking for locations within a quick drive from work, and by asking when I first enter a restaurant if I will receive my food within 15 minutes. Just about every place complies with that request -- and for the two which couldn’t guarantee that, I was cordially invited to come back when I had more time. Fair enough.

On this particular day I was able to get a whole 50 minutes budgeted for dining time, a bit longer than usual. I had heard about the menu change at Lulav and, knowing that the tiny bistro burgers I had talked about before were no longer available. I chose to venture there for lunch.

I entered and asked my question -- would my food be out at a certain time? I was assured that it shouldn’t be a problem. My dining companion showed a little apprehension, eyeballing the crowd that was coming in right after us.

We were shown to the side room and seated, with nary a soul there. I already knew what I would be eating; my companion had his choice in less than a minute. And we waited for about five minutes for a waiter, who took our drink orders and disappeared again.

I checked my watch. I now had 42 minutes for lunch. Well, no sweating yet.

Our waiter returned, took our orders and was gone again. The crowd in the other room was pretty loud. Another couple were seated in the same room with us.

I checked the time again. T minus 38 minutes now… T being the absolute latest I could leave to head back to work.

Our waiter came by and refreshed our drinks while my companion and I chatted. He assured us we’d be all right, that the orders were in and it’d be nothing at all before they got there. T minus 32 minutes.

The couple across from us were waited on. The crowd in the next room increased in volume again. T minus 28 minutes.

Now, I don’t expect a high-end restaurant like Lulav to offer an express lunch. But I had a feeling I was in trouble.

Our waiter came by to refill our beverages again. I pondered the location of the restroom, then nixed it and resolved to stop drinking quite so much tea. Knowing my luck, my lunch would arrive while I was utilizing the facilities. T minus 23 minutes. It had now been 15 minutes since I had ordered my burger.

A waitress came by and asked if we needed anything. I explained my growing distress. She told me she was sorry, but that the order AFTER ours, the order from the crowd that had come in after we had entered, might be holding our order up.

I now had 15 minutes left before I absolutely had to leave, and had no food. I handed money to my dining companion, asking that if I had to leave before it got there to box it up and bring it to me later. He agreed and then complained loudly. I tried not to be embarrassed by that. 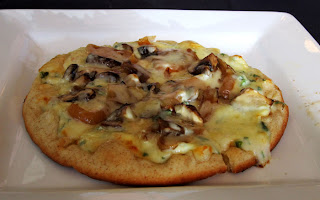 T minus 12 minutes -- and my dining companion’s food arrived. He stared at it for a minute. I think he was expecting a little bit more with his $9.95 Heirloom Mushroom Flatbread Pizza, described as “seasonal exotic mushrooms, caramelized onions and garlic, Fontina cheese, LULAV signature white sauce” on the menu. We debated the
 "exoticness" of the mushrooms for a moment.

And then… with 10 minutes left, I received my Cheesy Wheesy Burger ($8.50) with its side of LULAV House Salad (other options are fresh fruit, Loaded Baked Potato Salad or roasted Kennebec potatoes). And it was a nice, tall burger.

You have the option of having condiments added to your burger when you order; I chose not to, and I am glad to say that was the right decision. The burger was quite good. 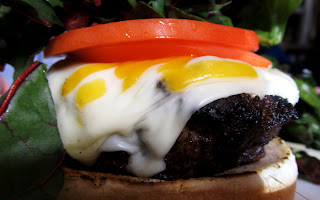 The half pound of ground sirloin was pleasantly lean but had formed a nice crust while being char-grilled and had reached somewhere between medium and medium rare inside. It was juicy and flavored lightly with salt and pepper. I was ambivalent to the field greens on it but just right with the tomato chunk. 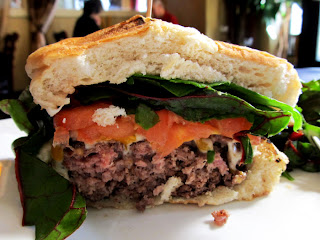 And then there was the cheese, which is what make this burger so good. The blend of American, Swiss and Cheddar was perfectly balanced to give the entire burger the edge of saltiness it craved, a blend of pungent and creamy that clung to the patty and to every bite.

The whole shebang was book-ended by grilled sourdough bun halves. It took some pressing to get it short enough to place in the mouth without unhinging the jaw.

The Cheesy Wheesy is a good burger, but as I said, I won’t be ordering one for lunch during the week. I asked for a ticket and a box when we received our food. I was able to eat a third of the burger and about half the salad before I had to pardon myself and leave; my dining companion faithfully packaged the leftovers for later consumption and took care of the bill. I just made it back in time.

Lulav has some nice and delightful highpoints. But I think it’d be a lot more popular with the lunch crowd if it set up some sort of work plan for quicker diners. Alternatively, it could market itself as a relaxed lunch spot, particularly for those who aren’t constrained by the clock. But that’s just my suggestion.

You’ll find Lulav at 220 West Sixth Street, next door to EJ’s Eats and Drinks (which does another marvelous burger, handles crowds well and has a quick lunch turnaround). It’s open for lunch Monday through Friday, 11 a.m. to 2 p.m. and every day for dinner. Check out the restaurant’s website or call (501) 374-5100 for more information.