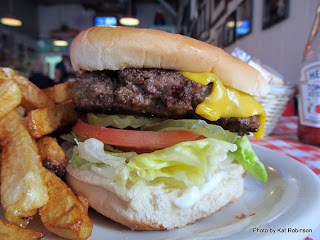 It must have been 20 years since I set foot in Doe’s Eat Place in Little Rock -- or close to it. I was a young ‘un, nearly 19, 10 feet tall and bulletproof and hanging with the young bloods that wanted to see the Guv’n’r go to Washington. I can recall sitting elbow to elbow with five or six other people, mostly in shirtsleeves, packed around a four-top table one evening. I was too young to drink but I was the only one not partaking of brew that night. I listened to stories told as I sucked down a Dr. Pepper and picked at the rather greasy-wet steak dropped in front of me. The one thing I really took away from that night was that if you ordered a salad there, you were a sissy.

I’ve dined in most all of the city’s establishments since then, excepting a few of the more uppity places, and I’ve made friends with folks who work at Doe’s and who frequent the place. Yet it did not occur to me recently that my burger trek should have me heading that general direction. 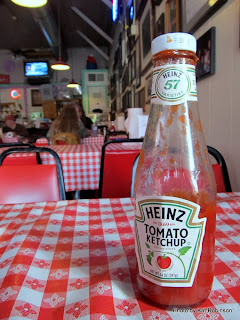 I went on a hot, sweltering March afternoon -- those words should NEVER be put together, but such are the weather patterns of late -- to feast upon a burger and enjoy some memories. I was stricken right away by how damn bright the place was. I guess not having entered during daylight hours, I had the preconception that it was one of those great back-lit night spots where rumors were started and beef was consumed. And that it may be.

Every wall is decked with memorabilia -- from Clintonesque things to general bits here and there about the food, a Reader’s Digest of grub lit to partake of if one is just a-standin’ around. I... was not. I found my table with its slightly torn plastic red and white checked tablecloth and sat my butt down. Eventually a waitress found me and asked what I wanted to drink.

The menu for lunch at Doe’s is simple -- hamburger, cheeseburger, chili dog, catfish, ham & cheese sandwich, grilled cheese, broiled chicken breast sandwich, grilled turkey and swiss. The “world famous” hot tamales are $4.25 for three with chili, $7.25 with a salad and $6.75 with fries. And then there are the legendary steaks -- a 2-3lb. T-bone for $16.50 a pound, a 2 ½-3lb. Porterhouse for $19.50 a pound and a 3 ½-6lb. sirloin at $15.50 a pound. They’re served up with marinated salad, French fries and Texas toast. I can’t even comprehend eating that much meat in a sitting.

There’s also a hamburger steak, spaghetti and meatballs, spaghetti with chicken, a catfish platter and chicken pasta -- and, a surprise to me, a Garden Chicken Salad. Well, I guess you can order a salad at Doe’s. How about that.

But as I mentioned, I only had eyes for burgers, and I ordered my cheeseburger ($6.25 with fries) straight-up how they make it. Took about 10 minutes to get it, in which time I watched a fellow diner consume an abnormally fat packed ham and cheese sandwich and another pick at a salad while she talked to that dude. No one ordered a steak while I was there, but I did notice several chili-stained tamale plates. 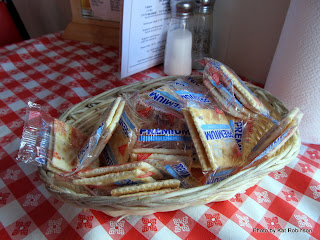 While I was waiting, I had myself a fine selection of Arkansas appetizers to choose from. This is a joke, of course. For some reason -- and I have commented on this before -- the older eating establishments around these parts feel compelled to bring out a basket of crackers -- sometimes Saltines, sometimes club -- to sate your appetite while you wait for your food. It’s no different at Doe’s, except this time there was no butter or salsa offered. Which was fine. I wasn’t there for the crackers. 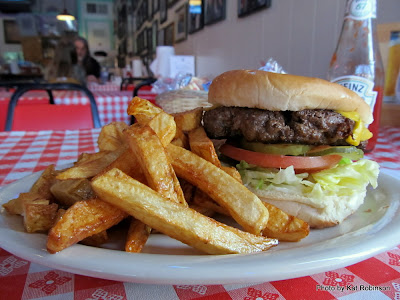 I was there for the fine cheeseburger that was delivered to my table, a half pound of medium-well cooked beef on a white seedless untoasted bun, pasted to that top bun with a slice of American (not pasteurized-processed) cheese. The bun was chilly, the meat was hot and the big pile of iceberg lettuce on the bottom was cool and crispy and coated with the mayonnaise that also covered the bottom bun. A hearty slice of tomato and some somewhat thick ridgy dills accompanied. There was nary an onion slice to be found. 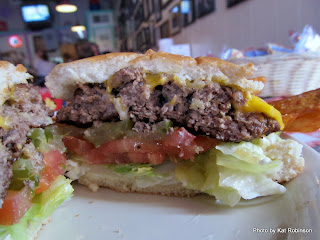 That, I assume, is because there are tidbits of onion in the meat, the only spicing I could determine in that nicely crusted beef patty. Nay, mayhaps there was just a slug of Worchestershire sauce in its inception, but the patty itself was devoid of all but the slightest enhancement with salt, pepper or spices. In fact, the high quality of the beef itself was the star, unencumbered by the fine quality American cheese that it carried. A fine burger, even if the bun did become smushy from its lack of toasting.

The fries bore their own need of mention -- firm, fresh-cut fries brought up to a defiant golden brown and enhanced with only a little table salt. They were nice and mushy in the center and firm on the outside, just a bit crispy, ketchup-soaking fries that were irresistable, a whole Idaho potato cut skin-on and, I am guessing, double-fried. I’d go back just for those fries.

So, the verdict? Good burger, good fries, and there’s a lot more light in the daytime than at night when you’re packed shoulder-to-shoulder with a bunch of twenty-somethings with big dreams. Though, for the true evaluation of that last bit, I need to make a night visit.

You’ll find Doe’s Eat Place down from City Hall and the police station in downtown Little Rock at 1023 West Markham. It’s open for lunch Monday through Friday and dinner Monday through Saturday. Check out the website or call (501) 376-1195.