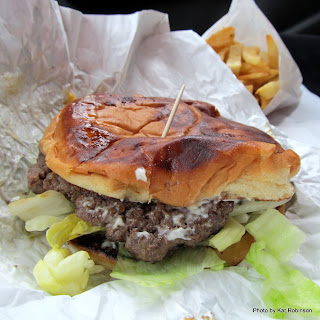 On some occasions in my burger quest, I’ve headed out to cover one story and ended up with another. In this case, I went to the exact place I needed to be -- 6230 Baucum Pike in North Little Rock -- and came across a completely different restaurant.

I was heading out to investigate whether Dub’s Hamburger Heaven still offered this Fundamental Burger that was supposedly made of bacon (at least, that’s what the Times review, which I did not write, said). It had a long standing following, and knowing it was offered at a drive-in I knew it had to be decent.

Dub’s is gone, but don’t you wail. The folks from Kibb’s BBQ in Pine Bluff have bought the place, and now the little beige drive-in is Grand Kibb’s BBQ... and you need to mark it on your map.

I stopped in for lunch the other day... as I mentioned, looking for Dub’s. Passed it up and ended up at I-440 first, then turned back around and double checked the address. Before I could even confirm that, I knew I had to get out of the car. The air smelled lovely, with nice sweet and piquant barbecue notes hanging in the air. 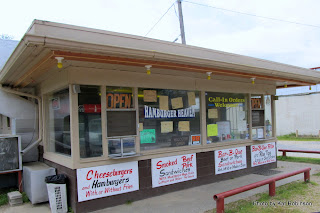 There were a number of different signs upon the building -- and the old arched letters proclaiming the place “Hamburger Heaven.” The mass bit of the menu was posted quite clearly on brand new signs on the front of the building: “Cheeseburgers and Hamburgers With or Without Fries;“Smoked Beef or Pork Sandwiches With Mustard or Mayo, Pickle, Lettuce and Onion, No Sauce;” “Bar-B-Que Beef or Pork Sandwiches Hot, Mild or Medium Sauce;” and “Bar-B-Que Ribs and Rib Tips Large or Small Orders, Hot, Medium or Mild Sauce.” 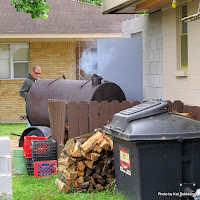 Inside the windows, it’s clean and a little empty, most of the smoking work being done in the back, presumably on a smoker such as this one spied around the side of the building. There was a help wanted sign in the window and all sorts of sheets of paper written on here and there with the prices of different things. A cheeseburger and an order of fries, for your information, came out to $6.11 with tax. There’s no fountain, just a cooler full of 20 ounce beverages.

I placed my order and went and sat in my car. Others were also waiting in cars, windows down on the delightfully perfect 68 degree spring day. A Coke truck pulled up and started unloading bottles.

When my order came out, It came out with a smile, and I walked back to the car excited to see whether that smoky scent would follow me when I left the property. 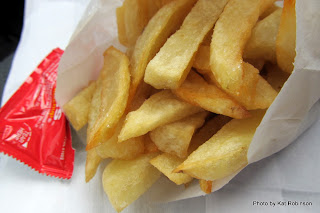 It did. I drove out to a park and pulled out my bagged noontime bounty for photographing and consumption. First thing I noticed were the fries -- skin-off handcuts that seemed to have more of a Yukon gold sort of flesh than the traditional Idaho, Russet Burbank. They were just crisp on the outside but nice and soft inside, good with the Hunt’s ketchup provided. They were barely salted, and the flavor tasted a little reminiscent of peanut oil. Best of all, they were plentiful, and I couldn’t finish my order. 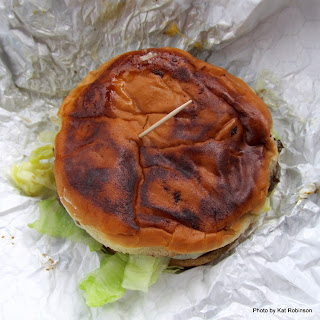 But that smoky scent wasn’t coming from the fries. It was coming from the burger -- which, unlike most burgers I have encountered, came on a bun that had been toasted both inside and out. In fact, there was a nice sheen to the whole affair, a big flat white bun buttered and toasted to a golden hue, almost crusty on the inside and a bit mushed all the way around. Under the bun, a layer of salad dressing (think Miracle Whip) and then the loosely packed half pound of burger. The black pepper spiced round carried with it the scent of a good sweet and tangy barbecue sauce, yet that sweetness wasn’t in the taste itself, just the smoke. It was a juicy burger, though cooked to medium well, with hints of paprika and maybe even honey to it. It was quite excellent. 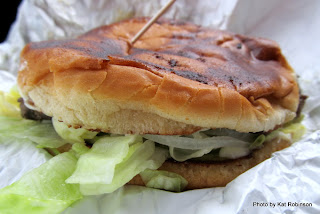 The patty rested atop a pile of shredded lettuce, a little pickle and some hair-thin ringlets of white onion. There’s no tomato on this burger, but that’s all right. Every ingredient just added to the whole barbecue sandwich feel of the thing. the lettuce took the place of that slaw we’re so used to here in Arkansas; the salad dressing gave a tiny bit of barbecue sauce-like tang.

It’s one of the most memorable burgers I have encountered in a while, and that’s saying something, considering all the burgers I consume.

Oh, I mentioned I had acquired a cheeseburger, right? The expertly melted American cheese was barely evident on inspection, thanks to an application while the meat was still on the grill. It had fully incorporated into the burger itself, and brought the whole concoction up to the level of extremely satisfying.