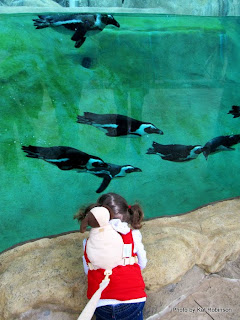 My daughter Hunter loves to go to the zoo. I don’t indulge her enough in this, I know -- a busy travel schedule and so many articles to write when I am home limits the time I have to take her out for an afternoon here and there amongst the giraffes and elephants at the Little Rock Zoo. I do need to correct this oversight.

But I am glad we were invited for a special sneak peek of the new Laura P. Nichols Penguin Pointe at the zoo this week. It was a very rare opportunity to see something straight off the blocks. 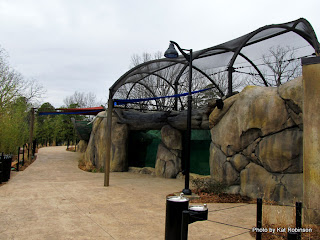 for a short but frisky ride in a golf cart to the new exhibit area. It’s about dead center of the zoo, overlooking some of the great apes and within eyeshot of the tigers. From a distance it’s a big outcropping of rocks under a cast iron mesh dome. Intriguing.

Kelli lead us down a path to a small staircase underneath what appeared to be a wrecked and overturned dinghy. Hunter had no problem making it downstairs, but Kelli and I had to duck underneath. There we found a semicircular window that looked down the exhibit at ground level. 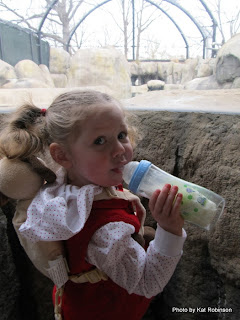 I helped Hunter up the substantial step there and let her take a look. “Mommy?” she asked me, peering about.

“Look close, Hunter,” I told her, and she focused her eyes as she chewed on the nipple of her bottle. “Do you see them?”

She gasped and looked back at me. “Penguins?”

“Yes, Hunter, those are penguins,” I told her. She looked back and pointed. There were just two in view at that moment, sitting on the rocks built up on the far side of the exhibit from where we were standing.

Kelli was telling me all about the exhibit, and suggested I come around to the other side. I helped Hunter down and we exited the other side of the overturned “dinghy” to the sidewalk. I could see a tall tank and a new building topped with plants ahead of me. To my left, big glass panels that held back the water. 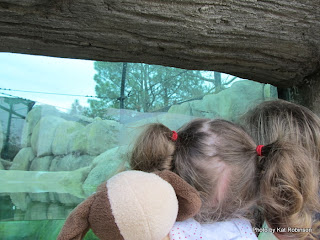 “Can you see the penguins?” Kelli asked Hunter, but from Hunter’s perspective on the ground she could see only the water. Kelli climbed up on the step just outside the glass and I helped Hunter climb up into her arms. She gasped again when she saw the birds on the other side of the glass.

“Penguins!” she exclaimed, and proceeded to take in everything she saw with big eyes. For a few minutes I took photos while the two of them looked at the birds.

Another journalist, Jennifer Dixon with the Arkansas Democrat-Gazette, had just arrived so we scampered down and back to the golf cart, which Kelli backed up and off-roaded to get around to the front again. Journalist tucked in, we went back and met with a couple of familiar faces, including Zoo education director (and longtime friend) Mark Shaw. 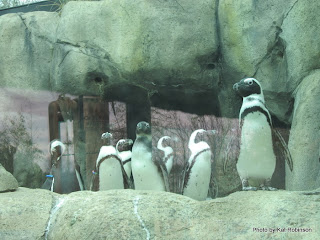 The penguins, more than half a dozen now, were all standing on the edge of the water, trying to decide if it was worth diving in. I do need to explain that they probably weren’t worried about the cold -- though it was in the 50s in Little Rock that day the water in the exhibit was heated, and I’m sure it would have felt splendid to take a swim.

These birds aren’t Antarctic penguins like you see in movies like Happy Feet. They’re from South Africa, African blackfoot penguins to be exact. They’re also called Jackass penguins because their call sounds like a braying mule. They’re sort of tropical birds and they like temperate climates. Of course, to be able to survive in summer heat in Arkansas they have to be pretty hardy fowl.

Hunter had already figured out two and two and calculated that if she could see a swimming pool and the birds were by that swimming pool that they could swim. “Penguins! Penguins! Come on in!” she hollered. “Water is fine!”

They stood on the edge of the water, jostling each other a little closer to the edge. I figured they could probably hear her a bit, but whether or not they were going to heed her, well, that was up to them. 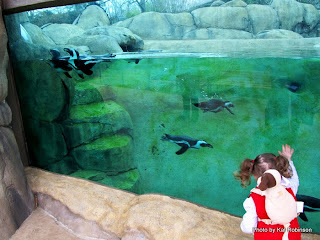 And then suddenly they were in the water, five of the birds, plopping in clumsily on the surface but becoming fantastic black and white streaked torpedoes as they submerged, darting back and forth and playing, even. Hunter squealed with delight and watched them, her hands and face pressed against the glass. 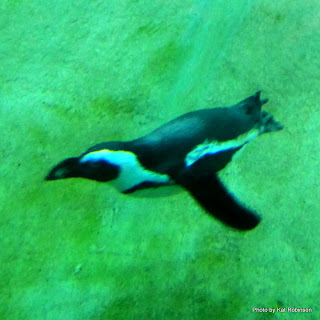 There are nine birds total in the exhibit, seven males and two females. Of the nine, there’s a mated pair. The rest are “tweens,” adolescent penguins not quite ready to mate yet. There are also a couple of other African blackfoot penguins that won’t be joining them in the exhibit. Laura and Skipper will be with the education department. They’ll live behind the Civitan amphitheater stage and will eventually go out to schools and such as part of the education outreach program. 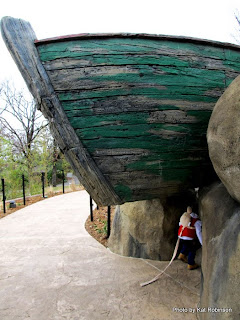 “Where did they go?” Hunter asked. The penguins had darted out of view. We walked back towards the dinghy. Flashes of black and white passed us again through the other panels of glass. Hunter ran down to the end and crawled under the dinghy again.

That dinghy, strangely enough, is made out of concrete. It’s a nice little kid-friendly observation point under there. There’s an observation point for the land section of the exhibit up top for the adults and of course those grand glass panels along the sides, but this area is just for the shorter-statured. Hunter clambered back up on the steps and squealed when she saw the penguins come up for air. 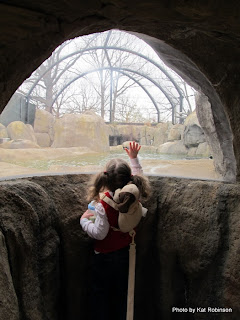 The dinghy and the rocks are all concrete, fabricated concrete gunite that should hold up well over time. The small mesh that’s over the upper part of the exhibit allows people to see into the exhibit and for the penguins to enjoy Arkansas and its climate -- but that mesh is also small enough that items such as coins can’t make it through. A single penny would be enough to choke a penguin to death, so it’s important to keep those items away. It will also keep other birds from getting in and harassing the penguins, though I have no idea if that’s a problem or not. 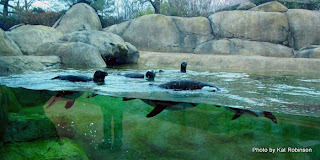 a program shared with other zoos in which species like these are preserved through breeding programs. The birds all come from one place or another -- four from the Pueblo Zoo, three from Steinhart Aquarium in San Francisco, two from the Hogle Zoo in Salt Lake City, and one from the Tulsa Zoo. While just nine birds will share this enclosure for right now, it’s big enough to house 20 -- the 1500 square feet of surface space is about the size of a typical ranch house.

Keepers were coming down to work with the penguins, and it was time for the birds to get out of the water. But we noticed they really didn’t want to get out. I couldn’t blame them -- playing in a nice warm pool or getting out into the chilly wind? I know which one I’d choose.


Mark tapped on the window lightly with the pads of his fingertips and a couple of the birds came up to the window, fascinated. They also peered through to Hunter, darting in front of her until they needed to go up for air and then coming back down. They seem to be naturally curious, just like us. 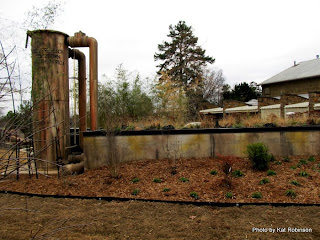 That tank I’d seen earlier, Mark explained, was for the exhibit, a water tank just for that pool. Inside the little low-rise building next to it were sand filters, pumps, a water chilling system for summer, ozonator and such. It’s lit by skylights and is buried to keep heating and cooling costs down, and the plants on top are local plants chosen to fit in with the whole African veldt theme that section of the zoo has picked up. 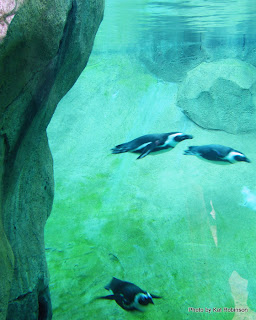 Thing is, Penguin Pointe is rather neat. It may be the only sort of exhibit of its kind, certainly is around these parts where you can view the penguins both in the water and on the land. The tank holds 20,000 gallons of water, plenty for the birds to play in. There are nesting boxes in the back almost out of sight where the males will keep eggs warm to hatch (that’s a penguin thing, the males doing it) and there’s a viewing area on the indoor section of the exhibit where keepers will work with the animals. It’s a pretty impressive $2.3 million dollar exhibit -- and all that money was raised and the whole thing built over four years thanks to donations, grants and other fundraising efforts.

Well, we’d been there a while and it was time to move on. We quickly toured the zoo before heading home… it was chilly and coming up on Hunter’s naptime. I buckled her into her carseat and climbed in, and moments after I started the car I looked back I noticed she’d fallen fast asleep. 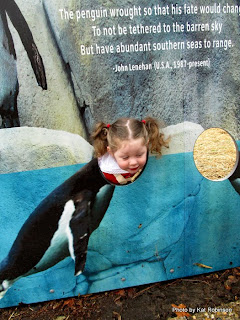 She’s been talking non-stop about the penguins ever since, looking at the photos I took and telling her daddy that we’re going to go out and see them again soon. Soon will be about a week from now -- when the exhibit opens to the public on Saturday, March 5th. I’m sure there will be other little girls going up to the windows, wide-eyed and gape-mouthed in wonder, and a few who’ll be calling “penguins! Penguins!” and pressing their faces against the glass, watching the birds play.

Oh, and parents -- a really neat little photo opportunity? Up on the main walkway just outside the exhibit there’s a great cut-out panel for you and the kids to pose as penguins. I caught this shot of Hunter there before we left. Cute? Of course.