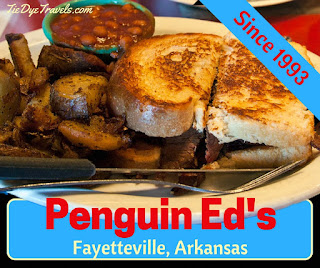 I’m always willing to try a new burger with promise, even at a place that’s known for something else. That’s how I ended up eating a burger and not the famous barbecue at Penguin Ed’s BBQ in Fayetteville this past weekend.

To be fair, I was looking neither for barbecue or burgers but for pie, my 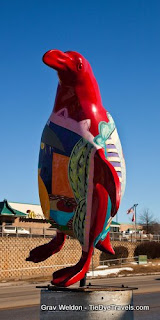 latest quest (which I’ll tell you about later). But by the time we ended up rolling up at Mission and Crossroads I was ready to eat just about anything.

First thing that caught my attention was the large number of vegetarian options on the menu posted on the wall. A full quarter of the menu is dedicated to the non-meat-eating sort, something I find very odd (though refreshing) from a barbecue restaurant. I mean, I have been places before where the only thing that didn’t include pork was the coleslaw (a pork BBQ joint that had bacon in the potato salad, alas) so to find one where not only I but many of my friends could eat too was very nice. 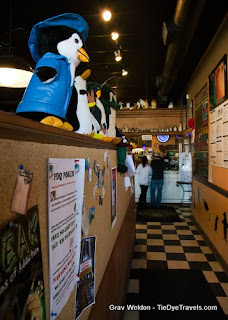 Yet still, that quest to have a fresh burger pic for you each and every Thursday was strong, and the listing looked great, a third-of-a-pound charbroiled burger with lettuce, tomato, onion and pickle and mayo with the admonition “Please allow 15 minutes cooking time.” Hey, a place that does made-to-order, right? And for just $4.95 I couldn’t go wrong.

I was also pretty jazzed on the side items. In addition to the expected coleslaw, baked beans and potato salad there’s also pasta salad, brown beans, green beans, and home fries. I went for the last two — broccoli and mac and cheese. Hey, they were there. I like both. Side items are $1.25 each, $1.95 a pint or just $1.50 for two if they’re part of your dinner.

My traveling companion went for the regular Sliced Beef Brisket Sandwich ($4.50, 5.75 for a Jumbo) and chose BBQ beans and home fries as his sides. We had a seat and waited. 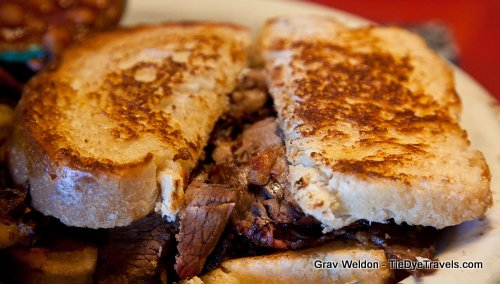 While we were sitting there, we got let in on the secrets thanks to the helpful history sheets placed under the glass at each table. Seems Penguin Ed’s began in July 1993 at that very corner in a little trailer, the brainchild of Ed and Diane Knight. The couple had decided to leave the corporate world behind to take up ‘cue, and so they did, with a tiny little trailer that was sometimes 10 to 20 degrees hotter inside than it was outside. In 1996 the business moved into the new shopping center built at the same intersection where the trailer was located (the crossroads of Highways 45 and 265). There are two other locations — the old B&B BBQ location taken over in 2002 and the one out on Weddington near Double Springs in 2007. 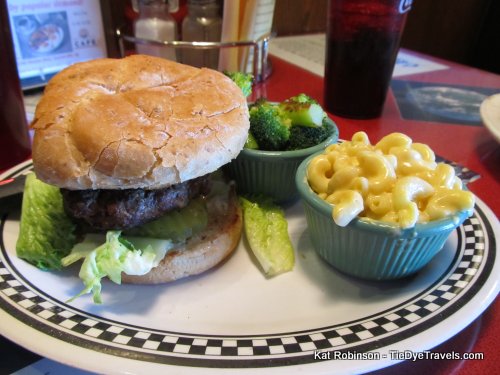 And the penguins? Well, back when the restaurant was still in a trailer, Ed would put these four paper mache penguins on the roof. Sometimes they’d end up on the picnic tables nearby. People started to give Ed other penguins — stuffed ones, ceramic ones, slightly lewd ones, unusual ones. So when it came time to move into the restaurant space it was only natural that it be called Penguin Ed’s. 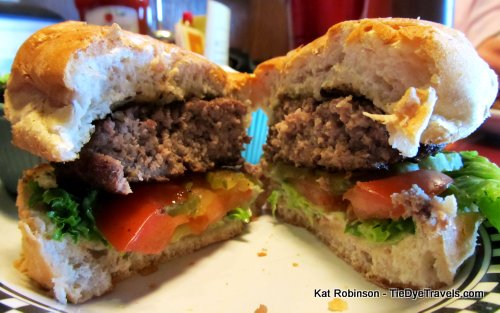 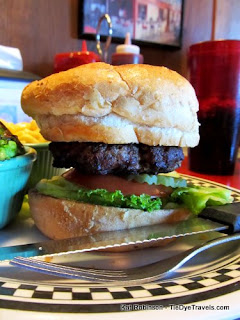 So my name was called, and I answered back, not thinking. Our order was brought out to the table. And let me tell you what. The first thing that struck me was that the broccoli had been grilled. The second one was “I don’t think that burger’s medium rare.”


I had indeed received a burger atop lettuce, tomato, pickle and onion with a little mayo on the extraordinarily large fluffy bun. But the proportion of bun to meat seemed a little… off. It kinda looked like a kid wearing a grown man’s hat. And it wasn’t cooked medium rare. But it wasn’t bad, either. 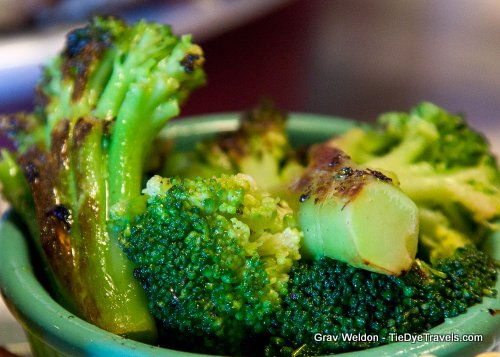 The broccoli I found fantastic, but then again I like plain, unbuttered or cheesed broccoli. Roasting it had added a nice flavor. The mac and cheese, a big pile of elbows in a ramekin, were average in appearance and tasty. 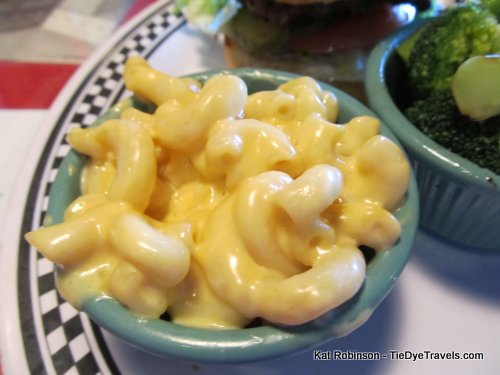 My companion’s beef brisket was served up naked on Texas toast, a big pile of meat right there with some nice coloring. The brisket itself seemed strangely thin but that just made it far easier on the teeth. His order of beans were far more like Pork ‘n’ Beans than the smoky strong beans I’ve had elsewhere, very tomato-y and low on spice. But the home fries were spot-on, big well seasoned butterey chunks of potato in a more than adequate portion slathered halfway across the plate. I had to steal a few of those. 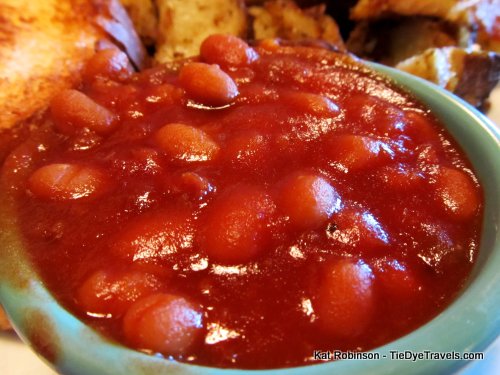 We discovered early on that brisket was going to need some sauce. And there are two. The mild house sauce is a very sweet paprika and black pepper flavored sauce with notes of both honey and brown sugar. The spicy, on the other hand, is a strong mustard based sauce with a good swig of vinegar to boot that smacked with a late heat. I didn’t care for the spicy on its own and thought the mild was lacking something — but putting the two together was serendipitous. They matched so well, I wondered why they weren’t combined in the first place. 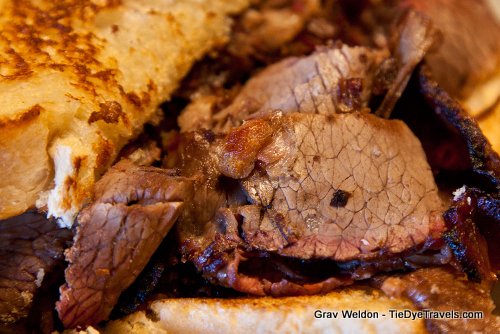 I also discovered that the addition of a little of both sauces took my burger to a new dimension. I ended up consuming the rest of my burger with the doubled condiment. 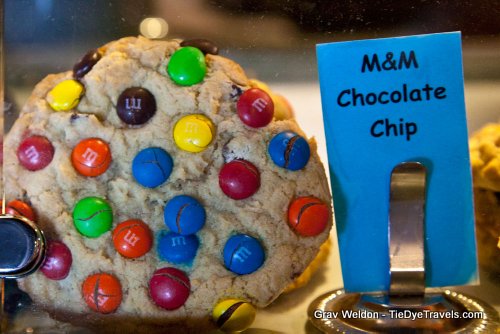 What I didn’t get while I was there were the Whoopie Pies. I know, they are technically pies, right? But I was sweeted-out from the Chocolate Lovers’ Festival over in Eureka Springs and couldn’t bear the thought of more sweets. Still, after looking at the photos I will have to go back for these big soft cookies adorned with toppings sandwiching a decadently thick white cream. They’re too pretty not to be sampled.

So the verdict? I think Penguin Ed’s has something good going on with its barbecue. And the burger was pretty good too — I just wish it had fit the bun a little better and have been a little less cooked through. Going to have to give the place another shot. 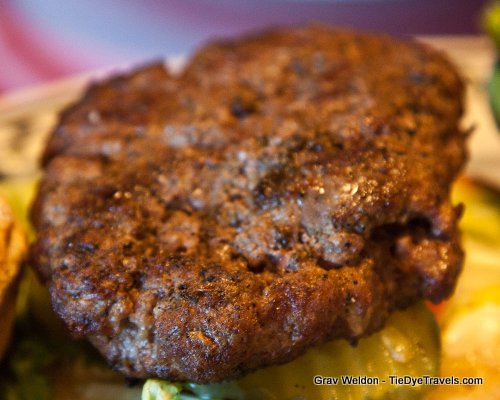 To get there from Dickson Street (which apparently everyone knows how to get to), head a block north on Highway 71 and turn right on Highway 45. It’s a bit of a ways down but it’s the first major sign of shopping center-age right there on the right-hand side before you get to Crossroad. They have awebsite or you can reach the restaurant at (479) 587-8646. The restaurant is open 10:30-8:30 Sunday through Thursday and a half hour later on Friday and Saturday. Oh, there’s Ed’s Penguin Café next door, serving breakfast… I gotta get back to that, too.