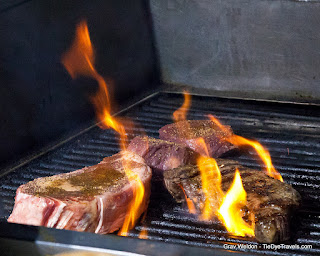 It was a dark and stormy night... and we were tired of driving in the storm.  Ever since we'd left Mount Holly Plantation's burned out ruins, we'd flown ahead of the storm until it rolled over us and blinded us.  Even as we entered Vicksburg and rolled above I-20, we remained blind to all but what we saw on the road directly ahead, thanks to the flapping windshield wipers.

As we sat at a stoplight, prepared to enter the forested section further south, tendrils of flavorful, slightly salty scent curled into the cab of our car, igniting our mutual appetites. Looking to the right, we saw a 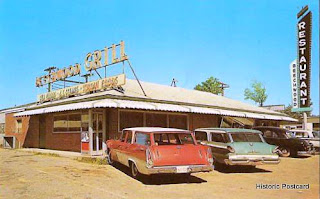 crowd of cars on a corner lot, the roof of an old restaurant beyond. The fuse was lit, our curiosity set afire, and I knew we'd progress no further until we'd entered those doors and sampled the fare within.

The restaurant in question?  Beechwood Restaurant, a long standing favorite in Vicksburg.  Opened in 1956, it's a favorite steakhouse for the Mississippi River community. 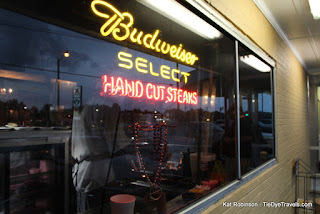 It took us a few minutes to find a place to park.  It was raining, hard, but there wasn't a spare spot in front or to the side of the restaurant.  We noticed several spaces taken next door at a motel, too, and ended up parking behind the building along the side of the road.  I was 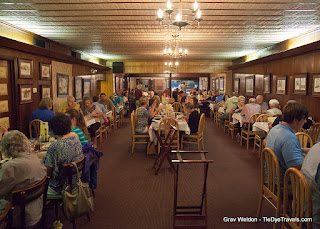 concerned that Grav would turn tail if we were given more than a 20 minute wait.

I shouldn't have worried.  While the main dining room was packed, there was a smaller room up front with a couple of booths, right across from the kitchen.  This looked 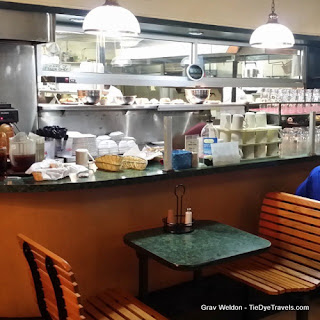 good enough to us.

We dove into the menu, which is packed with seafood options, appetizers and meat.  Grav thought over the po'boys while I thought about the housemade stuffed shrimp. The admonition in the center of the menu, stating "we will not guarantee the tenderness or flavor of a well-done steak" sold it for us.  Our eyes traveled to the beef, and while every steak looked tempting, we were easily lured to the idea of trying out the Show Stopper, a 24 ounce Angus Ribeye.  Well, since the menu also punned us with "All our steaks are cooked right before your eyes.  We won't steer you wrong," we figured it was worth a shot.

While we waited, we rested and talked over our trip.  The freak storm that came up at Mount Holly had kinda shaken us both.  Still, I did remember to nudge Grav out of his seat to go photograph around 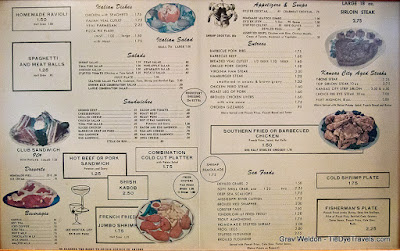 the place, and he captured several things, including a great old menu from the Beechwood Restaurant's early days. It was interesting to me to see the changes... while the steaks were on the older menu, it also included items like Southern Fried or Barbecue Chicken, a cold cut platter, Italian dishes such as veal cutlets and spaghetti with meatballs, shish-kebab, a hot beef or pork sandwich and broiled chicken livers.  My have our tastes changed since the grand early days of road travel.  I suspect that's what kept Beechwood Restaurant going all those years.  Its proximity to US 80 doubtlessly kept customers coming through the doors all these years. 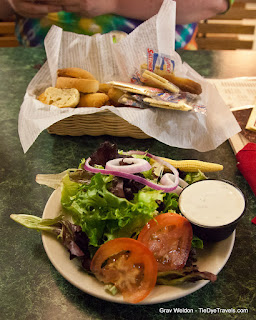 Our salads arrived with handmade dressings and a basket of crackers and house croutons, made from the same bread served with meals.  I really craved that salad, and it did not disappoint, with fresh and leafy greens, tomato slices, cucumber, red onion and (strangely enough) baby corn.  The croutons were real winners, though, and I claimed most of the basket for myself.

And then came dinner.  Now, we had asked for an extra salad since we were sharing a steak (which seemed common practice, judging from our waiter's reaction) but just 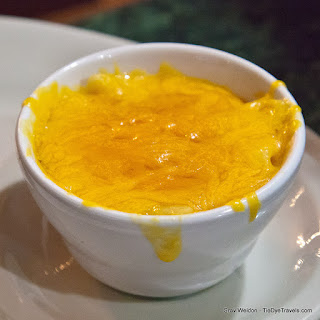 the one side, and it was impressive -- a deep cup full of macaroni and cheese under a veritable hood of melted cheddar.  It was substantial, and at one point we debated asking for another round to be added to our tab.

Of course, with that one steak, what were we worried about?  Now, we've both shared bigger steaks (the 33 ounce Porterhouse for Two at Taylor's in Dumas, the 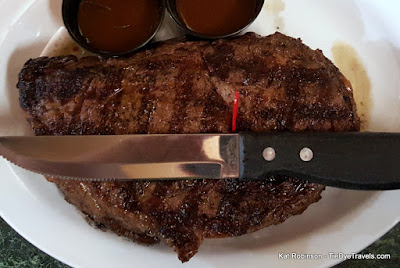 Prime Rib of Beef at the Colonial Steakhouse in Pine Bluff, the sirloin at Tamale Factory in Gregory and the two pound Sirloin for Two at Russell's Beef House in 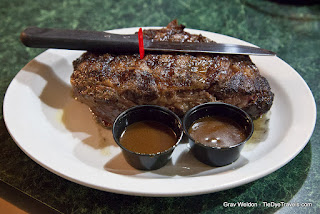 Corinth, MS all come to mind) but this one had a layer of flame-broiled goodness to it, enhanced with a blend of house steak sauce and au jus that punched all the right buttons for a rainy night.  It was a substantial steak delivered to our table with flair, a big knife and a plate for sharing. 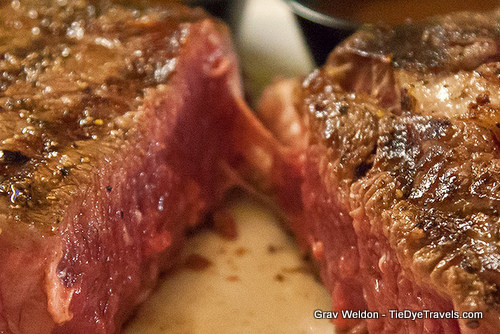 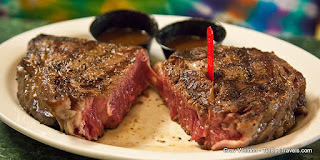 We asked for medium rare, closer to rare (pretty much the standard Grav and I choose when getting a steak) and had a hot almost red center inside that flame kissed crust.  It was tender and it was juicy and it was absolutely marvelous with the offered sauce.  Our waiter came by and asked if we needed any A1 or Heinz 57, but we both shook our heads.  We had exactly what we needed. 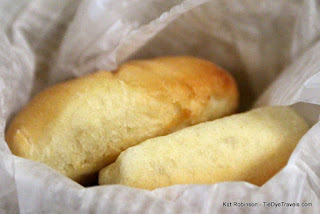 It didn't hurt that the steak had been delivered with fresh hot rolls that had a light taste of sourdough to them. I buttered up one and relaxed, finally letting go of the stress of that awful drenching hard-to-see drive we'd taken from Washington to Vicksburg.

We had a long way to go that evening, with a final destination of the night of Covington, Louisiana.  I vaguely realized there were probably desserts, but with such a long drive ahead I really didn't think adding to my already full belly was going to get me all the way down the road.  By this point it was dark. 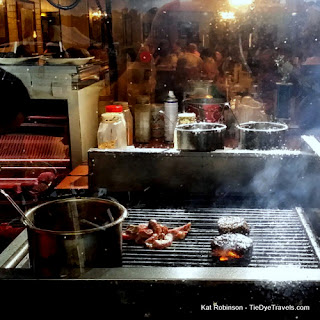 We'll get back to the Beechwood Restaurant next time we're in the Vicksburg area.  I'm interested to see the take on seafood, and there's a whole list of burgers that look positively epic.  And now that I've seen burgers on that expertly manned grill, I have to come back.  I keep hearing others now proclaiming the excellent food here, so I bet if you stop in you'll get a pretty good meal, too. 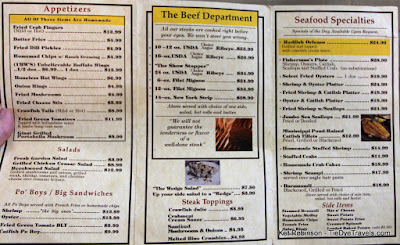 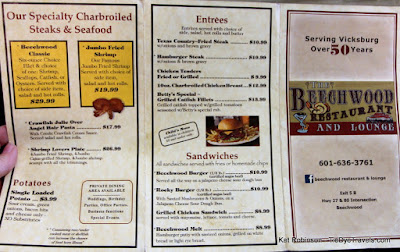