A Birthday Dinner at DeVito's of Eureka Springs. 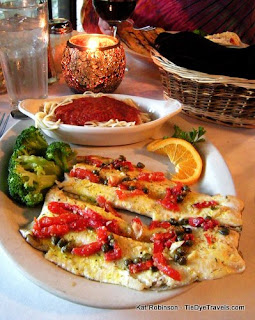 Spending time in Eureka Springs? Wonderful. And being able to share a birthday dinner there with my husband? Outstanding. Add in that the place where we dined was the famed DeVito's of Eureka Springs - and hey, we have a fantastic experience to remember always.

We had a very pleasant evening at DeVito’s last night. The company was decent, the sunlight was fading, and the food was comfortably splendid. 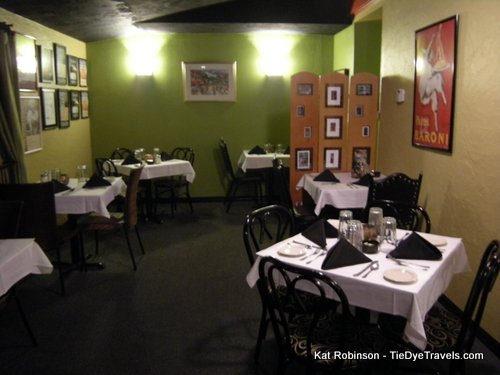 Paul and I were seated out in the lovely glassed-in porch on the back of the restaurant. Two or three stories below we could see the ebbing tide of cars on Main Street. There was a squirrel feeder out the window, and the comfortable hubbub of conversation around us. We chatted about many things; as you can imagine, having a toddler leaves us little time for conversation that doesn’t include said child.

Our sweet waitress gave us plenty of time to make up our minds on our order, gave us good recommendations and left us to our own conversation when we were deep within it. She kept my tea filled and put up with Paul’s wishy-washy-ness over what he wanted to drink. 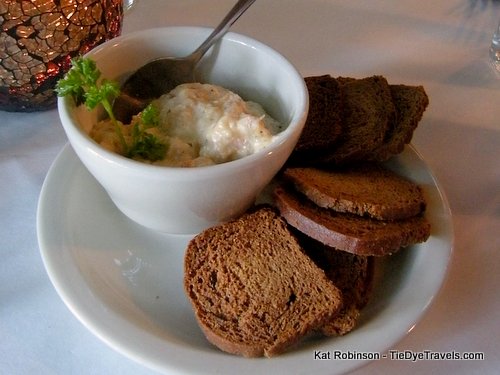 We started with the Shrimp and Crab Parmesan Dip ($9), a thick dip with whole 35-50 count shrimp and a thick paste of Parmesan and crabmeat. The balance between the cheese and the seafood was spot-on; we loved the flavors. The brown bread crostini was a little overpowering for the dip, but that was fine. It was tasty and we enjoyed it. 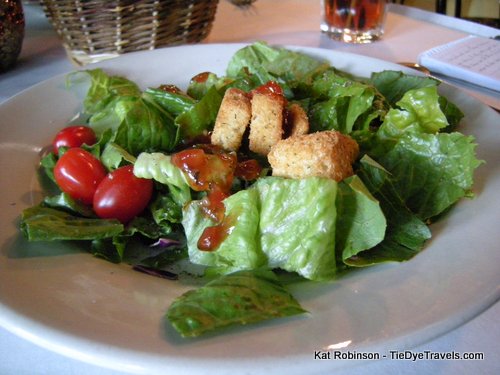 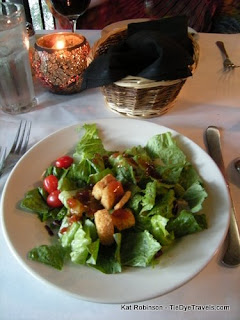 DeVito’s makes its own dressings for its salads, and while the Peppercorn Parmesan sounded great I was intrigued by the idea of the Sundried Tomato Basil. It was served on the side of the green leaf lettuce salad (dotted with small tomatoes and croutons). I found it to be surprisingly strong, tangy and sweet — not icky sweet but sweet like a good tomato jam. In another setting it might not have fit, but with a fine Italian-style meal it seemed appropriate and welcome.

The bread served with the meal is a little unusual for an Italian place. It’s a very white, slightly dense bread with a hearty crust, served sliced almost impossibly thin but with the texture and strength to stand up to a good buttering. Real butter accompanies, and together it’s a mild yet effective side for the dinner.

We’d both debated long and hard on what would be our entrées. DeVito’s, after all, has been doing the locavore thing for a very, very long time — long before it was even a concept. The trout all comes from the family farm, which has been in operation since 1956 near Harrison. In fact, the trout raised at Bear Creek Farms doesn’t just go to this DeVito’s; it’s also served on the table at DeVito’s of Harrison, which is run by the three younger brothers of James DeVito, the proprietor of DeVito‘s of Eureka Springs. When Paul and I were in college we’d sometimes run up to Harrison on a whim (gas was cheap and we were poor, this was our entertainment) and we’d sit out next to the creek in front of that restaurant, dreaming of what we’d do when we were professional somethings and could afford to eat at such a fancy restaurant. No joke. There used to be a rock shop there, too…

But of course, I digress. 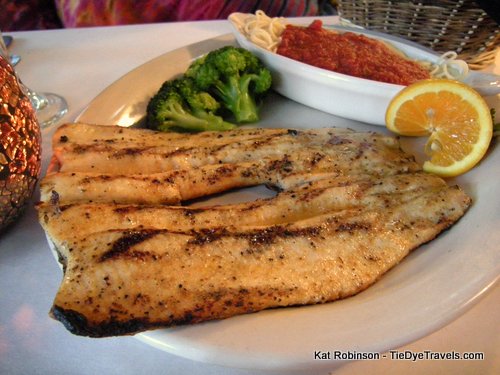 We both wanted trout, and he settled for the Chargrilled Trout ($19). Maybe settled isn’t the right word. Maybe “happily accepted” is. When our dinners came out, he found on his plate a gorgeously butterflied span of rosy trout lovingly grilled and plated before him. The fish flaked easily off the skin in chunks, not overcooked and quite well seasoned. 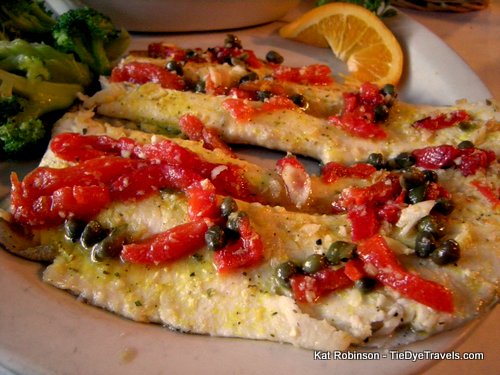 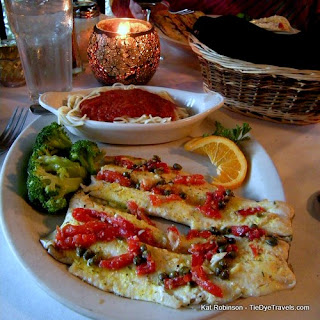 I’d chosen the Trout Italiano ($22), broiled butterflied trout cooked in olive oil and lemon juice with sweet peppers and capers. The first bite of the dish was somewhat fruity, but there's an excellent balance here between the sweet, the savory, and the citrus-y. Unlike other fish dishes I’ve had from the broiler, this wasn’t slimey, just really buttery and pleasant. I found myself enjoying it a bit too much, actually, had to slow myself down in my fish-fueled fervor. 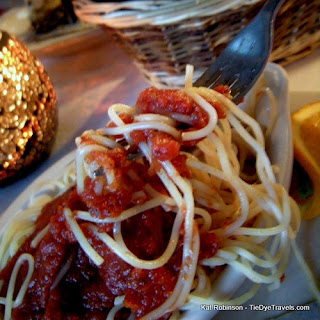 The dishes came with the vegetable of the day, which in this case was broccoli served steamed and ever so lightly buttered. We also had a choice between French fries, potatoes or pasta as a side and both chose the pasta. DeVito's sauce starts off very fresh and tomato-y, but underneath that there's a true classic Italian flavor full of oregano and thyme, an ageless flavor that suits the 24 year old restaurant well. The spaghetti noodles are thin and appropriate for the dish. This, to me, is comfort food on a fine dining level. 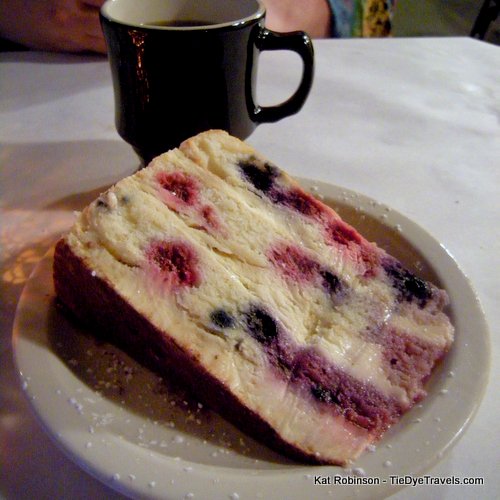 The night was coming on. We were enjoying the quiet celebration of Paul’s 42nd birthday and the sudden quiet of the restaurant. Well, it was a Monday night, and while we could barely hear the waitresses confirming the orders of the diners in the front room, we had the back porch all to ourselves. It was intimate and lovely.

We debated a little, but decided pain or no pain, not having dessert on his birthday was just a crime. DeVito's serves up different desserts each day for $7. Among the choices we were offered: chocolate hazelnut layer cake, white chocolate cheesecake, vanilla ice cream with raspberry sorbet in a white chocolate shell. We went for the Moscato Tiramisu — berries soaked in Moscato wine served between layers of Marscapone and ladyfingers. It was divine. 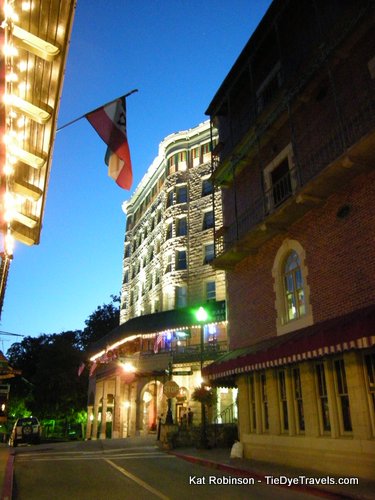 When we were done and turned out into the evening, we were delighted to find a deeply blue sky above all the beauty that is Eureka Springs. Just outside DeVito’s doors we saw the lit fascade of the Basin Hotel. The streets were somewhat quiet. It was a magical moment in the evening, and it was wonderful.

DeVito’s also does a lunch with sandwiches and pasta. We’re thinking about dropping back in before we go home to see what sort of delights might meet us there then. The restaurant is open every day except Wednesday, with lunch from 11:30 a.m. to 2 p.m. and dinner starting at five.