In Praise of Gas Station Sushi... Sort Of. 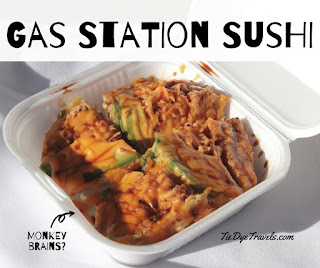 You''ve heard the punchline before - an admonition never to eat sushi from a gas station. But what if it was actually good? This one time, I'm willing to give it a shot. Let's visit Pine Bluff Hibachi Express.

If you want to get technical, Pine Bluff Hibachi Express is attached to a gas station. You don't walk in and pay for your fill-up there, at least not for gasoline. It's the south side of this convenience store along Arkansas Highway 365 on the north side of town, and it may not look like much. Indeed, there's no dining facility within - just a hall for you to wait in after you place your order at the counter, and a drive-up window.

The menu is pretty simple, too - a handful of rolls, several of which include crawfish (which I didn't order since it's not crawfish season), some Chinese dishes, egg rolls, and hibachi selections.

On this particular trip, I wanted to see if the sushi was decent, and to dig into a little hibachi, too. But I was stopped dead in my tracks by two words.

So yeah, while guessing at what I wanted to order, I just mentally registered the term "monkey brain" and let it fall out of my mouth. And that's how, 20 minutes later,  I had a monkey brain in a bag.

Oh, that sounds weirder than I intended it to. 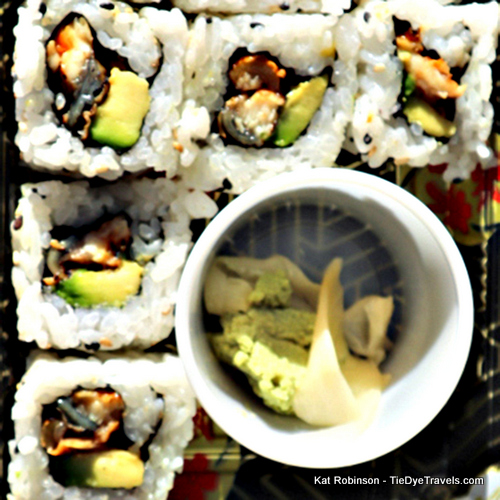 So, what did I end up with? Well, let's start with the sushi. I had picked up an eel and avocado roll for Hunter, since she digs the two. She was a little surprised I didn't get a green dragon roll - but Pine Bluff Hibachi Express doesn't have a green dragon roll. I pointed out to her that all the same ingredients were there. She was... well, she was okay with it, but said it wasn't particularly outstanding. That meant I got to try it. And I didn't die. No, actually, it was all right. 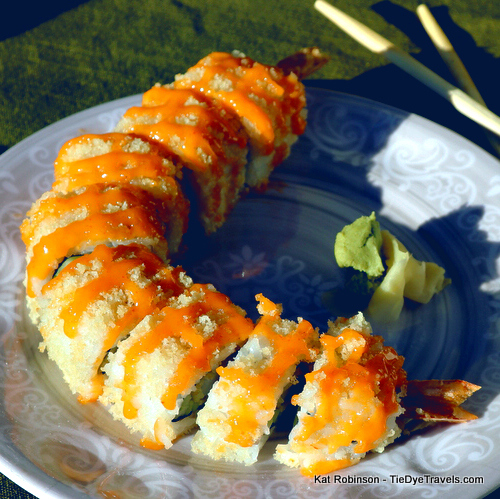 And then there was the monkey brain. No actual monkeys were harmed in the creation or consumption of this dish. In fact, it contained no monkey at all. 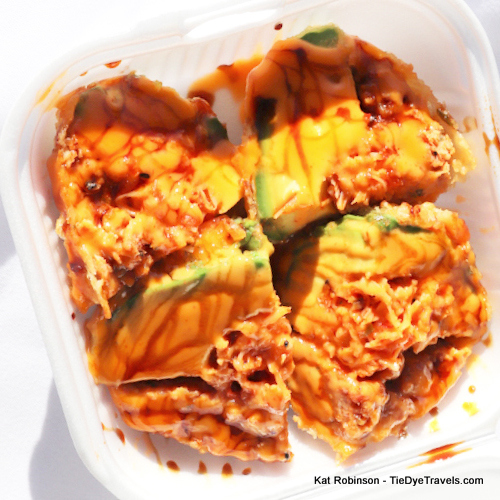 What it was, was an avocado that had been split, filled with a mixture of spicy tuna and Krab (that artificial crab made from pollock or whitefish), sealed, tempura battered, deep fried and covered in swaths of Japanese mayo and hoisin sauce, then cut into quarters.

So, it was tasty, but different parts of it were tasty at different times. When it was hot, I liked the filling but didn't care for the hot mushy avocado. When it had cooled, I loved the avocado and the tempura coating but the Krab and tuna center had hardened into a mass that drove my cats crazy but which required a fork and reflaking for me to contemplate finishing it. An odd creation, worthy of a State Fair.

So far, not terrible. I didn't die. But there wasn't anything there that had really excited me. 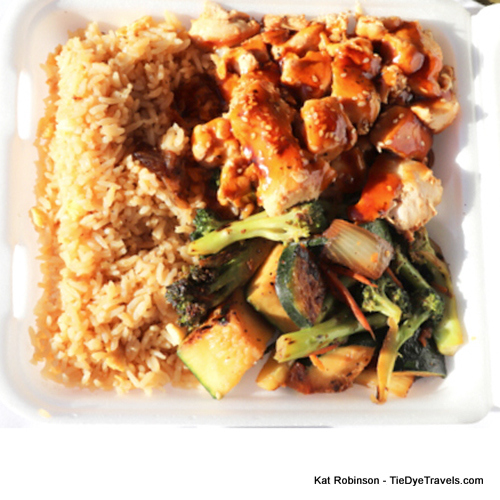 Then there was the hibachi chicken. And that, that dish, pleased me greatly. It wasn't expensive, but it was plenty of food, enough for me and Hunter to share and still have leftovers. The fried rice was fluffy and very flavorful, the chicken juicy and not too salty, the sauce with its sesame seeds nicely delightful. The broccoli was a little overcooked but that suited Hunter fine, and I dug that zucchini so well.

So, gas station sushi? Yeah, if you need sushi on the north side of Pine Bluff, it's worth a shot. But if you're really wanting something tasty while you're there, get a box of hibachi to go.