What'll Be New at the 2019 Arkansas State Fair? Some Speculation. 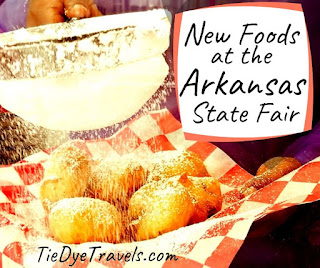 Each year vendors vy to see who can come up with the strangest, tastiest and most popular new food at the Arkansas State Fair. For over a decade I've shared those treats with you, and given you insight on where to find your best value in funnell cakes, corn dogs and cotton candy. Here's what I believe is coming to this year's fair.


The 2019 Arkansas State Fair opens Thursday, which means this Wednesday the media will get a sneak peak at what'll be offered, whether it's concerts, entertainment, or wild new rides. Vendors for each year's fair are invited to show off those new dishes to the public. Wednesday's evening newscasts for the Little Rock stations will be packed with details.

Longtime readers of Tie Dye Travels know I go deeper, talking with every vendor, checking out prices before the fair begins and sharing that information in my annual post. Thanks to this insight, I can give you some idea of the strange and unusual that'll be on hand for this year's big event.

1.  Dilly Dogs.  Wells Foods of Malvern is advertizing the Dilly Dog as its neat new food of the fair. There are two versions advertised around right now. One is a corn dog with a dill pickle at its center, which would not be a new food for this fair; in fact, last year such an item was introduced as Arkansas's Largest Deep Fried Pickle. 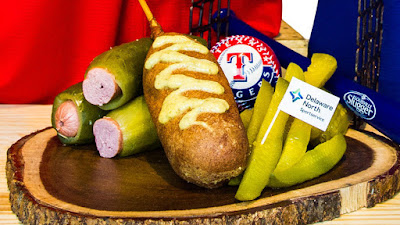 I suspect what might be coming is a creation from the folks who provide concessions for the Texas Rangers. Their Dilly Dog is a hollowed out pickle stuffed with a hot dog, which is then of course battered and deep fried. The dog was introduced at the beginning of the 2018 season for the Rangers, and has some popularity. It should be interesting to see which way this creation goes. Personally, I'd be all about a roasted version where there's no batter and the dog is cooked inside the pickle on a griddle. We'll see.

2.  Fried Lasagna. Over the past several years, Pat's Kitchen has come up with Indian Fry Bread Tacos, Fried Spaghetti and Meatballs, and the Thanksgiving Taco - the last of which earned both the Tasty Tom for Best Tasting and Most Unusual new item at the 2017 Arkansas State Fair. This year there are a few new items on the menu, including this fried lasagna. I'm curious to see if this is a battered and fried product like the aforementioned fried spaghetti on a stick, or a new creation. There's no word on whether it'll be delivered on a stick.

3.  Deep Fried Pork Loin.  Kountry Kitchen, affectionately known as the Pork Chop Shop in front of the old Swine Barn at the end of the Midway, is offering up this delicacy as a new item this year. Considering the nature of pork loin, I suspect this will be pre-cooked pork loin that's getting a second run through the fryer, either battered or just tossed in on a stick to quickly crisp the edges of the meat.

4.  Crawfish Egg Rolls.  Gator and Taters has been touring the southern and southwestern United States on the fair circuit these past few years. They've been bringing lobster rolls to lots of destinations, and that's no different here - but this year's up-the-ante is an egg roll made with crawfish as the protein. Should be interesting to try.

5.  Gourmet Shrimp Burgers.  In the year of Burger King's Impossible Burger and the promotion of the company Beyond Meat, burgers seem the most interesting thing to reimagine. This year, Taste This is doing just that with a shrimp burger. Will it be a shrimp patty similar to a crab cake, or will it actually be just shrimp, remains to be seen. 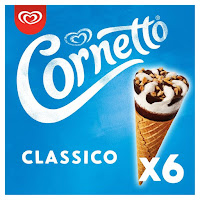 6.  Deep Fried Cornetto.  On the surface, our American sensibilities might have us thinking about another corn product battered in cornmeal and deep fried. But there's a British confection known as the Cornetto - their version of our Nutty Buddy - that's a frozen ice cream cone treat. Is this what the Pat's Kitchen folks are dreaming up? We'll find out.

7. Sanity.  Some may think it's a long shot, but I've noticed a trend these past few years. While places such as the State Fair of Texas consistently ramp up their deep fried crazy, the Arkansas State Fair has wandered back into healthier territory. Paizi's Gyros and Greek salads have been a staple for a long time, but we've also seen a return to roasted meats and vegetables, particularly with flame roasted meats of all sorts, potatoes and sweet potatoes, peppers and corn on the cob. 2017 introduced salad on a stick, and last year's awesome find was the chicken salad filled cucumber. Battered, chocolate covered and deep fried all have their place, but I'm looking forward to sharing more and better good choices from this year's Arkansas State Fair.

That being said, we'll see what happens. For comprehensive fair food discoveries as they happen, please follow me and my partner Grav Weldon, on my Instagram, on his Instagram, and on our Tie Dye Travels Sideblog for quick finds. And be sure to come back to TieDyeTravels.com Thursday morning for the annual comprehensive food guide to the Arkansas State Fair.